Accessibility links
Uber's Online-Only Restaurants: The Future, Or The End Of Dining Out? : The Salt Uber has helped create about 800 "virtual restaurants" in the U.S. — eateries that only exist online. Uber says its delivery service helps restaurants grow, but some in the industry see downsides. 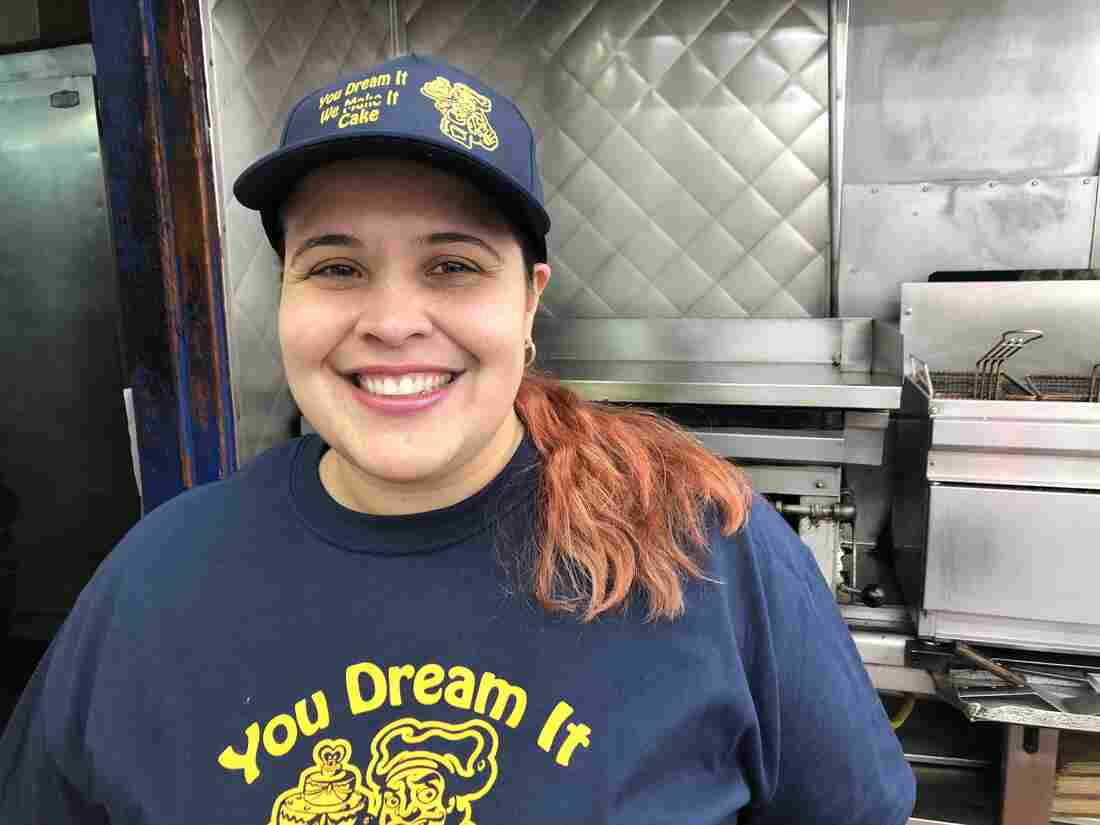 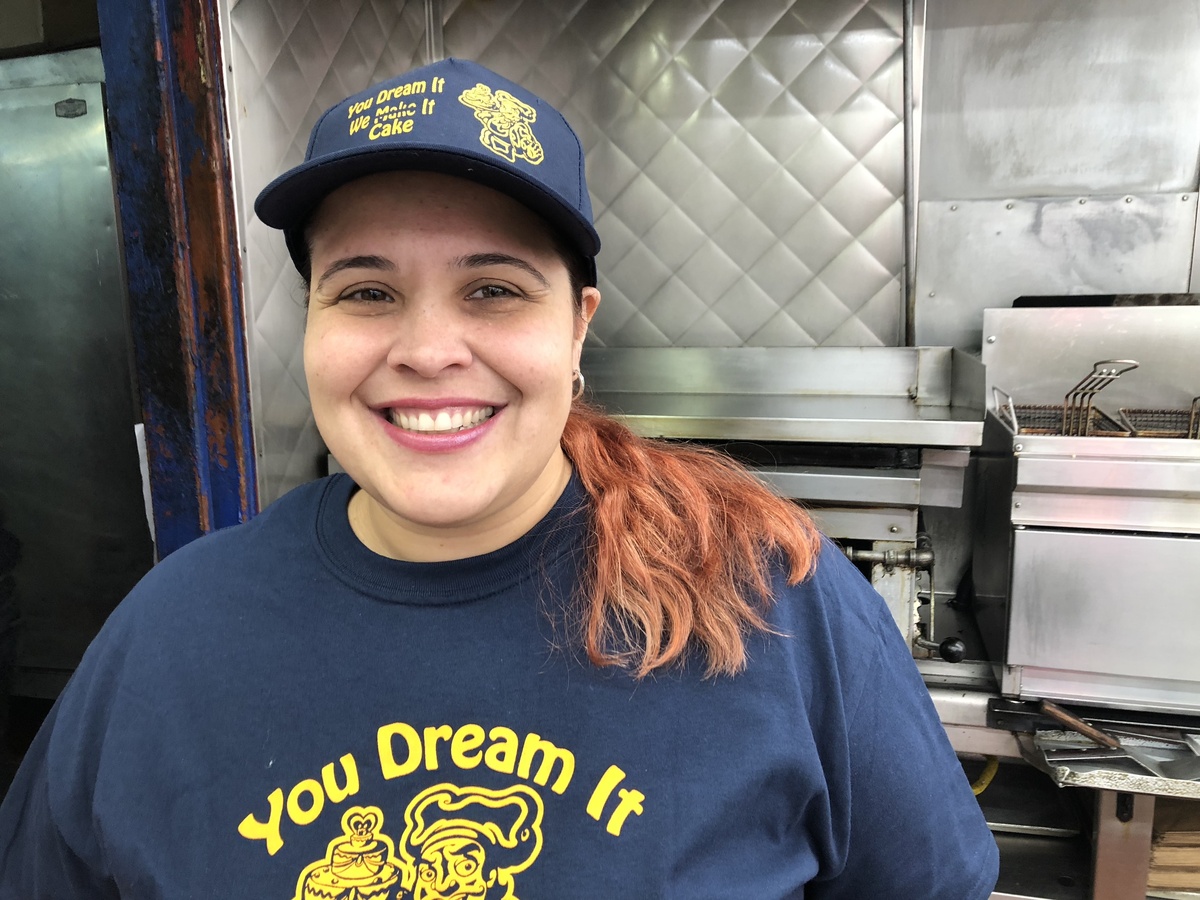 Betsy Leyva is co-owner of a Brooklyn, N.Y., bakery that has an online-only restaurant, with deliveries by Uber Eats.

It's a chilly autumn afternoon but inside a little Brooklyn bakery, it's hot. School just let out, and the store is filled with kids eyeing baked goodies. Their banter mixes with Caribbean music playing in the background.

La Gran Via Bakery is an institution in this neighborhood. It's been around since 1978 — three generations of pastry chefs making cakes, cupcakes and traditional Latin American pastries.

Which is why, when co-owner Betsy Leyva was recently pitched the idea of creating a hamburger restaurant on the side, she balked.

"I was like, are you crazy? What do you mean? What are you talking about?" she says. Uber, the ride-sharing company, was suggesting she create a "virtual restaurant" — one that only exists online, and delivers through Uber Eats.

There are now about 800 such virtual restaurants in the U.S., often created when enough customers look through the Uber Eats app for a certain type of food in their area that they can't find.

"When we see people searching for something but not finding it, that signals to us that there's an opportunity and there's unmet demand," says Elyse Propis, who leads Uber Eats' virtual restaurant initiative across North America.

So the company approaches an eatery and suggests creating a virtual side restaurant, with those dishes people are craving but can't get.

Uber says doing this helps restaurants grow their business and cater better to customers. But there are mixed feelings in the industry about whether these virtual restaurants are a good thing. While they can boost business, Uber takes a cut of their profits. Plus, delivery fees raise the cost for customers.

Food Delivery Hits The Web, But Restaurants Pay The Price

Leyva, has nothing but praise for Uber Eats. In the end it was her brother, the bakery's co-owner, who convinced her to give it a try. And that's how, the online restaurant Brooklyn Burger House was born.

It has a mouthwatering online menu, but in real life there's not much to it: just a grill, inconspicuously tucked in a corner behind the pastry counter, where meat and cheesesteaks sizzle.

Leyva says that on Brooklyn Burger's opening week, she thought she'd go crazy. The demand was so high, she was constantly running out of ingredients. It hasn't died down — she had to hire additional staff.

The restaurant might be virtual, but the profits are very real: "We've increased our sales by about 30 percent. So it's very exciting," Leyva says.

Daniela Galarza, a senior editor of Eater Magazine, says that as millennials get older, they're turning to time-saving services like Uber Eats.

"They're starting to have children. They need things that are convenient, that are easy for them. And dining out isn't always easy with young children," she says.

Enter an array of ordering platforms like Seamless and Grubhub. Galarza explains that in the restaurant business, delivery has always been a headache.

Not everyone sees Uber Eats and the virtual restaurant as a natural solution.

One Texas restaurant owner is particularly passionate about his disdain for the company's entry into the restaurant business.

"You know, I haven't had the stones to say, 'All right, cut them off.' Although many, many people would love to just tell Uber to go, you know, jump off a bridge," says Jay Jerrier, owner of the Cane Rosso wood-fired pizzerias in Texas.

Jerrier says restaurant profits can be as skinny as the thin crusts he specializes in. And Uber Eats is taking a big slice of the earnings.

"They charge us between 30 and 35 percent of whatever the bill is," Jerrier says. "And then the customer pays anywhere from two bucks to six bucks for the delivery. Plus a service fee. Plus credit card fees. So, you know, it's nuts."

Uber Eats wouldn't discuss the specifics of how much it charges restaurants. Jerrier says that for all the promises of expanding a customer base, delivery is never as profitable as someone dining in and ordering a glass of wine and dessert.

But it's not just about the money. Jerrier, like so many in this business, loves being part of the dining experience.

"You know when I was growing up, I loved Thursday, Friday, Saturday, because I knew there was a chance — just a chance — that we maybe go out to the neighborhood restaurant," he recalls wistfully.

And he wonders: Are we losing that?