Accessibility links
In Soul Food Cookbook, Chef Carla Hall Celebrates Black Culinary Heritage : The Salt For a long time, the celebrity chef says, she failed to appreciate the food she grew up with. The book reflects her personal journey to embrace the meaning and depth of African-American foodways. Carla Hall has a new book that explores her heritage and attempts to bring soul food to a wider audience. She embarked on a long journey through the South to investigate and get inspiration, and the story is a deep look into her philosophy.

Carla Hall grew up eating soul food since before she could speak.

Her latest book, Carla Hall's Soul Food: Everyday and Celebration, brings to life the cuisine of her childhood, and explores her winding, but rewarding, journey back to her heritage and Southern roots.

You may know Hall as an Emmy-winning co-host off ABC's The Chew or her two turns on Bravo's Top Chef, where she delighted audiences with her "cooking with love" philosophy and her quirky catch phrase: "hootie hoo!" (a two-part call she and her husband use to find each other in public).

The ebullient, offbeat, off-the-cuff songwriter and Rockette-dancing chef was born and raised in Nashville. She has written her third cookbook, hosted the James Beard Awards, runs a Maryland-based catering company and opened the short-lived, trouble-plagued Carla Hall's Southern Kitchen in Brooklyn, N.Y., which closed last year.

She joins co-host David Greene of NPR's Morning Edition to talk about her new book and the deep meaning of soul food in African-American culture.

Soul food, as you say, is like muscle memory. You remember making it with your grandmother. But when you started to go on to more formal training as a chef, you got away from it for a while. Why?

I think that I didn't appreciate it. I didn't realize that it was so much a part of my culture. I was taught that everything that's other than what I am was great, especially as an African-American. And if you're going to be a chef, then the foundation is French cooking. So I was running toward that to validate the things that I was doing, which was being a professional in the culinary world.

Are you glad you did that? Or does part of you wish you didn't feel pressured to run away from your heritage?

I'm absolutely glad that I did it, because I think anybody — in whatever discipline that they do — who goes away and learns what's out there in the world and then comes back has a better appreciation and takes something from that experience. 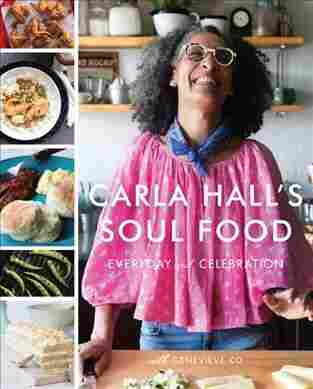 by Carla Hall and Genevieve Ko

When I think of soul food, I think of stuff that might not be that healthy, like fried chicken or fried okra. Is soul food misunderstood?

I think that it is misunderstood. There's a small piece that people know of soul food. When you go to a soul food restaurant, the people who own that restaurant are going to give you those celebration dishes that are going to bring you in. When you are around the table, and people from the outside come into your home, you're celebrating! So of course you're going to have mac and cheese and smothered pork chops and fried chicken and ribs, because that's what you do. Even in other cultures, that's what you do. So I think that soul food got stuck there, because this is what people are eating. They're celebrating and going to restaurants. But people weren't having fried chicken every day. They couldn't kill their chickens. They needed the eggs!

One of the real "smile moments" while reading the book was when you distinguish between soul food and Southern food. Can you remind us what that difference is, in your mind?

Black people! It's also the difference between a hymn and a Negro spiritual. You can sing the same song, but if you're doing a note [sings flat note] and someone else is singing [elaboration of note], those other notes that are being sung are not on the paper. But it is something about feeling that song and where that emotion came from. That is like our food. You're putting in that heart, and it is coming from some place deep in your soul. You are getting out and just pulling somebody in and saying, "I see you, I feel the pain that you have been through." That's a Negro spiritual.

Speaking of pain that people have been through, I know you took a journey through the South for this book, and one of the stops you made was at Mother Emanuel [Emanuel African Methodist Episcopal Church in Charleston, S.C.], one of the oldest black congregations in the South. It was the church's 199th birthday. It was where a gunman opened fire on worshipers three years ago. What was that experience like?

We had second thoughts about going there because there was so much pain. But we decided to go and they were having this celebration. We went into the kitchen, and the matron of the kitchen was like, "I'm trying to get this food done and you all are in the way!" There's a hierarchy that happens in the kitchen, especially at these churches where these women are getting this food out, and there is this one woman — who is the best cook — who is doling out tasks to other people, and it is serious! It was really beautiful. It was about the congregation coming together. There was a tragedy, but you knew that they had each other, and that anybody who came into the church that day was part of that family.

One recipe in the book I want to ask you about: hot water cornbread. This is not your average cornbread, right?

It is not your average cornbread if you're not from the South! You start with white cornmeal. In the cornmeal there is salt and a little bit of baking powder. Then you boil water and put a little bit of fat or shortening or lard in it. Then you pour that hot water over the cornmeal, and you mix it until it becomes this mush. The hot water actually cooks the cornmeal. And then you make it into little patties. I always remember my grandmother's fingers being in those patties. And then you fry the patties in fat.

When I was making it for my book, I thought I would make it with eggs and make it softer, and again, bringing that French influence into my Southern dish. It was the day that we were shooting the cookbook, and I'm at the stove making a hot water cornbread, and I'm like, "What am I doing? Why am I changing my culture, my food, for other people outside? I should be showing them how it is made so that they can appreciate how it was done." So I had this come-to-Jesus moment. It was probably my grandmother turning over in her grave and poking me to say, "What are you doing? This is your culture!"

It sounds like this recipe reflects a lot of the things that you were learning about yourself through this project.

Yes. I must say that this was a personal journey with this book. I set out to tell the story so that African-Americans could appreciate the food more and people outside the community could understand what it is, and maybe be inspired to not only cook this food but also to look at what their personal terroir is and what the food from their culture looks like. But I got more from it. I think I appreciate other cuisines more. I realized I was carrying a chip on my shoulder about my food and wanting it to be special ... so it would come out sideways. And now, it is just a love for this food and a deeper appreciation for other cuisines.