Accessibility links
Bronx Food Revival Is Rewriting The Playbook On Gentrification : The Salt It's a prime example of "gentefication," economic revival led by people with roots in the community. The cultural mix is a culinary celebration: African, Albanian, Caribbean, Italian, Latino and more.

Bronx Food Revival Is Rewriting The Playbook On Gentrification

Bronx Food Revival Is Rewriting The Playbook On Gentrification 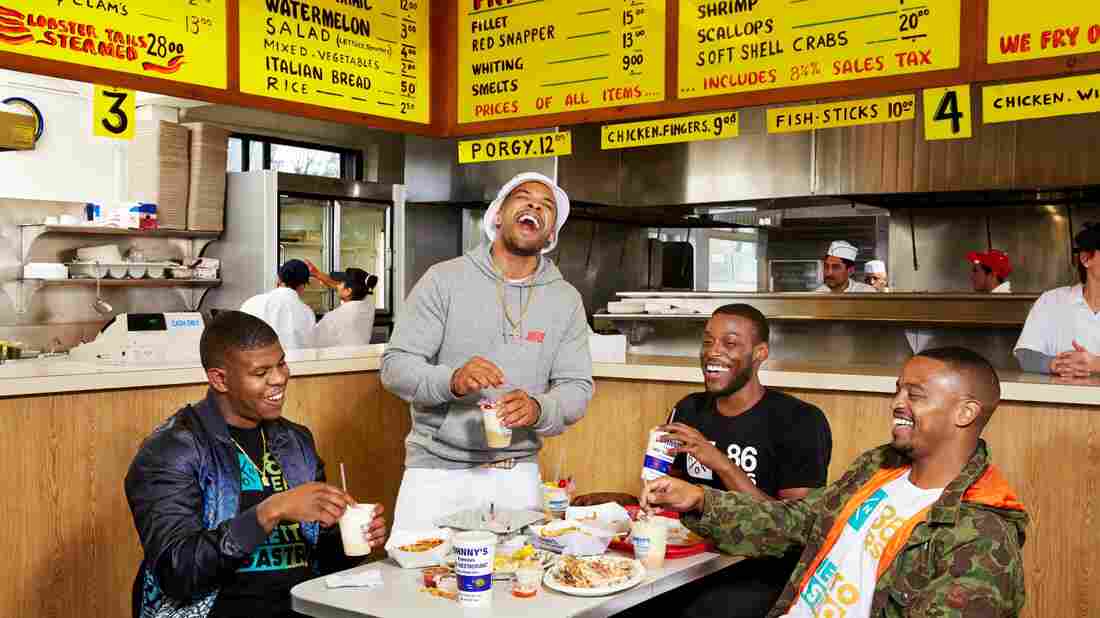 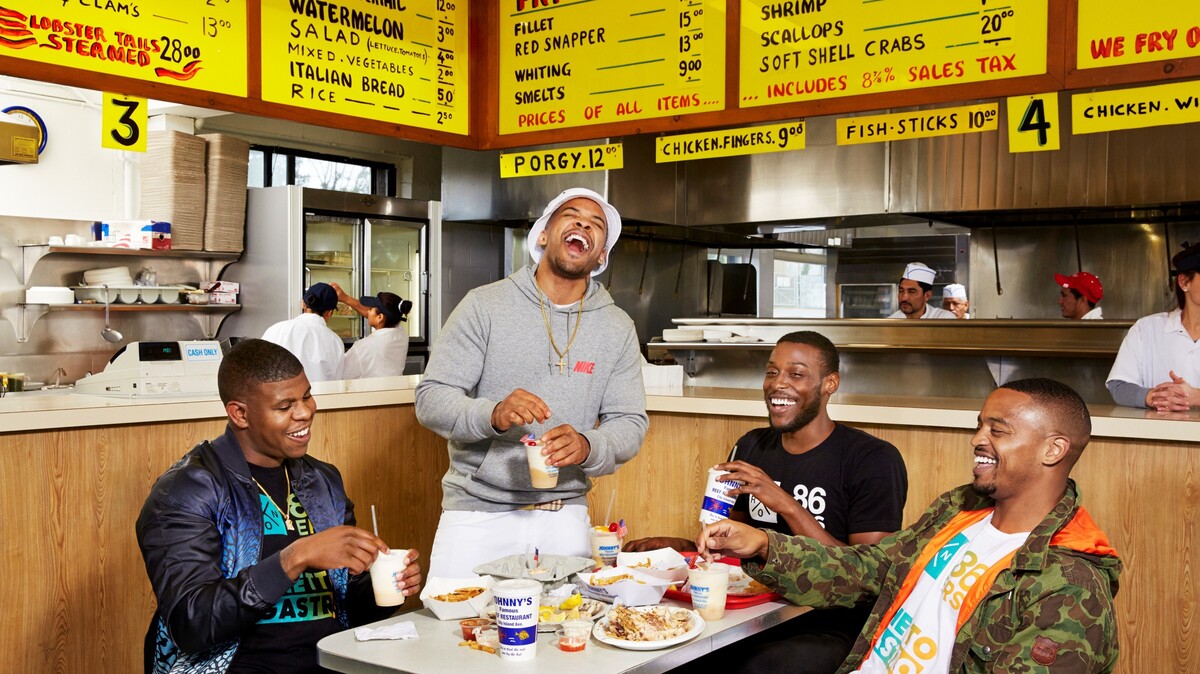 The Ghetto Gastro collective is a self-described "black power kitchen" in The Bronx.

When Malcolm Livingston II, the pastry chef at Denmark's Noma, a four-time winner as the world's best restaurant, decided to move on to new things last year, he returned to his native Bronx, N.Y., and the Ghetto Gastro collective, a self-described "black power kitchen." And he is not alone.

Tim Washington, a chef nicknamed "The Cake Pusher" because he weighs his ingredients on digital scales used by drug dealers, bakes his sumptuous confections a block away from Yankee Stadium. Famous Nobodys, a South Bronx streetwear brand, annexed a pizzeria on its block, offering huge $2 shots that blend blue curaçao, gin, rum, tequila, triple sec and Sprite. And at the new Bronx Night Market, a mantia (Albanian flaky veal dumpling) is served proudly alongside a jibarito (a Puerto Rican sandwich between two slices of fried plantains).

The Bronx is no longer burning. But it is lit. And its food revival is rewriting the gentrification playbook — the one issued for years by largely white interloping hipsters in Brooklyn to all corners of the world — by importing a novel tactic from Los Angeles: gentefication (from gente, the Spanish word for people), in which a neighborhood's artisanal renaissance goes beyond being locally inspired or sourced toward something much more radical and resonant: locally controlled.

"The Bronx could be on the threshold of a new model of revitalization," says Ritchie Torres, a Bronx city councilman who favors Fiasco, a new Italian restaurant that serves Sicilian street food and spiced-honey pizza. "The Bronx is revitalizing itself on its own terms by changing from within."

Of course, in the cosmopolitan crossroads of New York, there are other pockets of gentefication — "hardcore Indian" Adda in Queens, refugee-staffed Emma's Torch in Brooklyn, the granny chefs of Enoteca Maria in Staten Island, and the glossy expansions of family-run Chinatown restaurants in Manhattan, including Hwa Yuan and Nom Wah Tea Parlor. But the phenomenon is more sweeping and intrinsic in the Bronx, where it is braided into daily life with the hypnotic, fluid complexity of hip-hop, which was born in its streets.

Where the narrative has long been that of Jennifer Lopez's "Jenny From the Block" — grit leads to character leads to talent leads to leaving — locals are now considering the Bronx as a home base for success, not just a launchpad. Partly, says Jacob William Faber, a sociologist at New York University who studies racial economic disparity, that's because gentefication short-circuits classic gentrification's racial friction and internalized racism.

"The opportunity to be agents of change in their own neighborhood or community gets at the parts of gentrification we discuss much less often — changes not just in rents but in political power or cultural identity," he says. "It's harder to argue about displacement with a neighbor who is succeeding." The Cake Pusher calls gentefication "a more reasonable version of gentrification."

Gentefication poses a brash challenge to the largely white culinary cognoscenti: How long can famous minority chefs like José Andrés, David Chang, Eddie Huang, Padma Lakshmi and Marcus Samuelsson be part of the mainstream before everyday minority chefs are normalized — and spotlighted — in their own neighborhood redevelopments?

"It's a reaction, partly, to the idea that if someone's going to do this, it should be us," says Amanda Celestino, the born-and-raised self-described "Bronxophile" who is the editor of Edible Bronx magazine and co-founder of this summer's debut Bronx Night Market, which brings more than 10,000 people to its monthly event. Hers is a defiance that echoes similar sentiments in the revivals of Detroit, Houston, Newark, New Orleans and Oakland. "The Bronx is not rebranding. It's not the new Brooklyn," she says. "It's taking back what we deserve. Because we don't deserve cookie-cutter development. Nobody does."

Of the night market's 36 food vendors, 21 are Bronx-based, including Blenlly Mena's Next Stop Vegan and its asopao (a thick Puerto Rican rice soup), chimichurri, and BBQ jackfruit offerings. Or Jason Alicea's Empanology and its chopped cheese or red velvet varieties of empanadas. Or the hot Cheetos-flavored tamales of Israel Veliz, the 29-year-old founder of City Tamale. No taste bud is left unturned.

"I called it City Tamale because it's a taste of what it means to live here. New York is a place that welcomes new ideas and new people. Of course tradition is important to me. But so is growth. So is change. You can't stop change, especially in New York. But also you can't control change unless you join it," says Veliz, adding: "I'm the first American in my family. I'm the first English speaker in my family. I'm the first business owner in my family. I'm a new kind of Mexican, a new kind of Latino. Don't I deserve a new kind of food? A new tradition?" He pauses before offering a sharp rhetorical question: "Why can there be so many types of bagels but I can't make a jerk chicken tamale without offending people?"

Veliz and his culinary compatriots are tired of the back burner. "I'm from the Bronx," he says in Spanish, "but that doesn't stop me being a New Yorker." So they're turning up the heat — without burning out, as Brooklyn did in its descent into what critics see as pomp and parody. (Torres calls gentrified Brooklyn "cosmopolitanism without diversity.") Even among revered pizza makers from Naples and across the country at the recent New York Pizza Festival in the Bronx's Belmont neighborhood, a standout was a pie — short ribs! Tropea onions! Calabrese chili oil! — made by Ciro Perrotta at Zero Otto Nove around the corner.

"There's an old-school mentality, even with the new generation, of being proud of what you're doing. It's trendiness with soul, not just for the regrams [Instagram reposts]," says Celestino. "The flavor of the Bronx can't be changed. It's an aha moment every day. Why would anyone want to change that?"