Accessibility links
To Save This Rare Pig, We Need To Eat It : The Salt The American mulefoot hog was once popular, but began to die out in favor of fast-growing breeds suited to confinement. But some farmers hope to renew interest in the hogs — by getting them on menus. 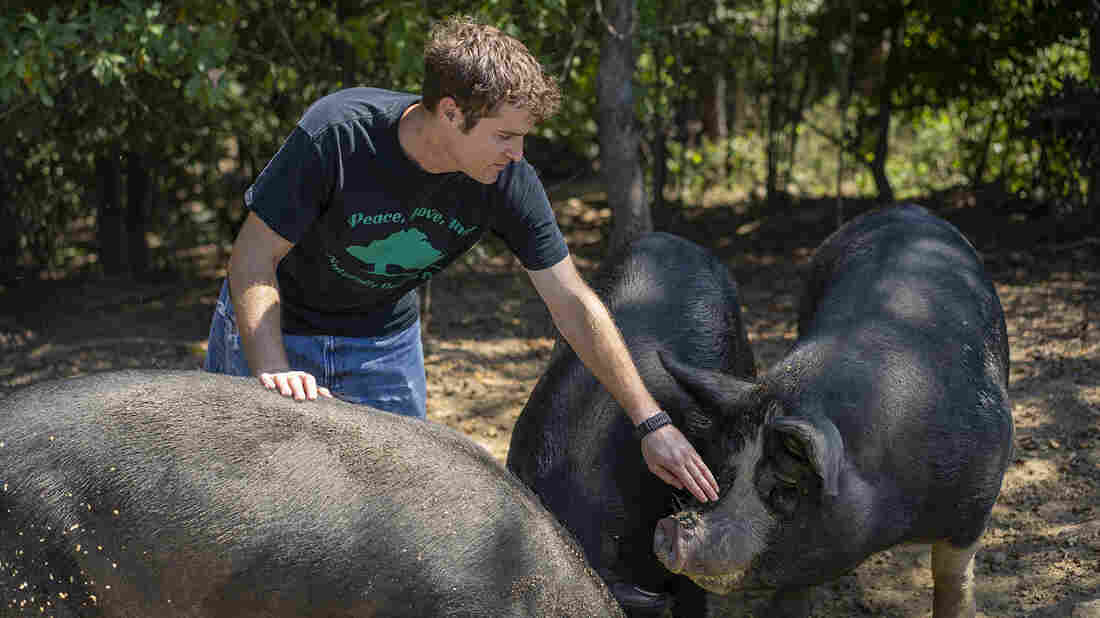 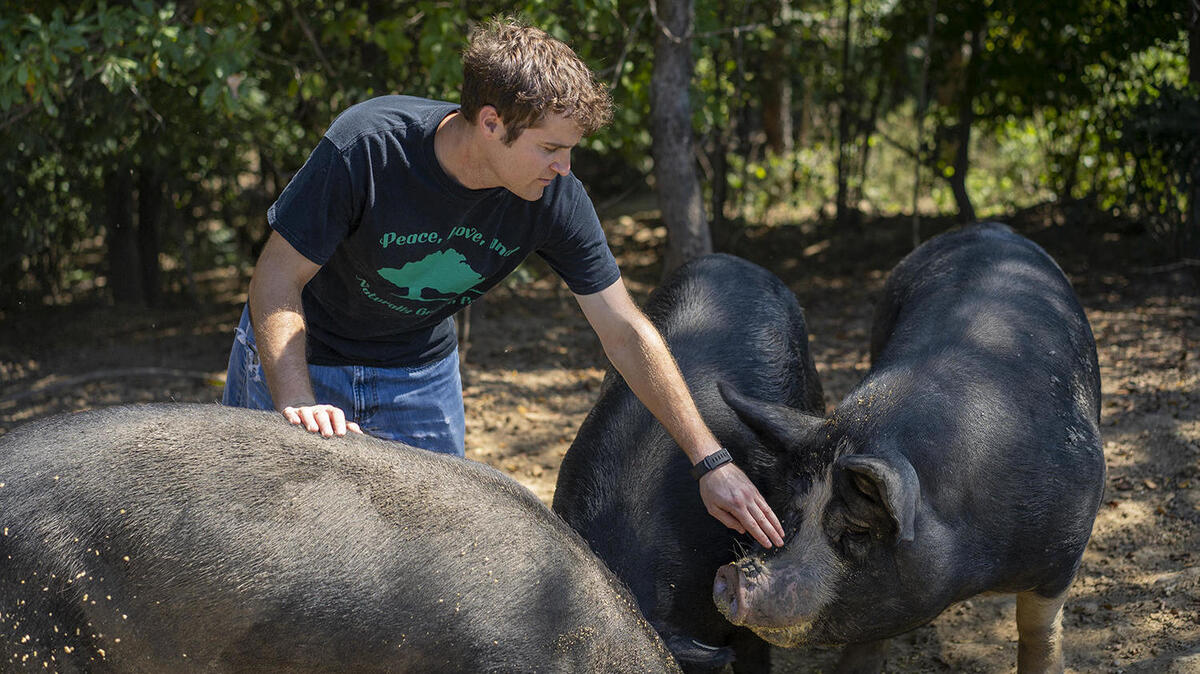 Josh Davis tends to his hog herd on his farm in Pocahontas, Ill. Once a popular breed, there are now only a few hundred American mulefoot hogs left.

That's not the only thing that sets him apart as a hog farmer.

For the past three years, Davis and his wife, Alicia, have been raising one of the rarest pig breeds in the world on their farm in Pocahontas, Ill. The American mulefoot hog was a popular breed in the Midwest in the early 1900s, but now, there are only a few hundred left. The Davises are among a small group of farmers hoping to revive the breed — by putting it back on the menu.

"The reason why this hog is going extinct is people aren't eating them anymore," Josh Davis says while loading buckets of fermented grain onto a wagon.

He thumps the buckets together and whistles, luring his herd of "beautiful flowers" from the trees. The 500-pound hogs roam 12 acres of forest and pasture at Green Finned Hippy Farm, a small organic farm about 40 miles northeast of St. Louis, Mo.

The American mulefoot hog doesn't look like your typical pink pig — it's charcoal black with a solid hoof, like a mule.

A century ago, hundreds of herds spread across more than 20 states, including Missouri, where it was nicknamed the "Ozark hog."

Jeannette Beranger of the Livestock Conservancy says the mulefoot's "rough and tumble" nature made it particularly attractive to farmers in the Midwest.

"A lot of the time, American mulefoot hogs were managed on river islands," Beranger says. "They'd forage all summer long, then when it came to butchering time in the fall, people would just go out to the islands and take what they needed."

The mulefoot hog started falling out of fashion after World War II, with the rise of commercial agriculture operations that favored a few fast-growing breeds suited to confinement.

Missouri farmer R.M. Holliday saved the breed from near-extinction in 1964, when he gathered the few remaining mulefoot hogs in the U.S. and established a conservation herd at his farm in the small town of Louisiana, Mo.

There are about 200 breeding mulefoot hogs left in the U.S. today, all of which are descended from the "Holliday herd."

'How can you eat something that's about to disappear?'

In Illinois, the Davises didn't need much convincing to get their own herd started.

"It feels like there's a lot more purpose when you're doing something that's not just for the sake of growing food for people," Josh Davis says. "We're also doing what we can to be conservationists at the same time."

Alicia Davis describes the animal as a personable, mild-mannered pig that you can feed out of your hand. Plus, she adds, the meat "just melts in your mouth."

It hasn't been easy, however, to persuade their fellow farmers to take the risk.

For some, the problem is the bottom line: The hogs have smaller litters and take about two months longer to mature than a commercial hog.

Although there are several farmers in Missouri raising American mulefoot hogs, including at Crystal Creek Farm in Ash Grove and Heritage Hectares in Saco, the Davises are the only registered mulefoot breeders in Illinois

"We're still surrounded by very old farming techniques in this area," Alicia Davis says. "They don't understand why what we're doing may be important. They think it maybe wastes time or money."

In the end, she says, it comes down to economics. In order to keep the American mulefoot hog from disappearing, they have to put back on the dinner table.

"It's very hard for people to think, 'How can you eat something that's about to disappear? Isn't that making it disappear?'" she says. "It's the exact opposite. If people lose interest in this hog, that's why it'll go extinct."

'A special piece of meat'

Over the past year, the Davises have developed a small but loyal following of local chefs, including Rob Connoley, who owns Squatter's Cafe in St. Louis.

Connoley seeks out local farmers and ranchers in an effort to buy ethically raised goods with interesting flavors.

"The diversity of sourcing creates a stronger product because it gives you diverse flavors," he says. "I can go into 20 different restaurants today and pretty much get the exact same food. Why? Because the ingredients come from the exact same places."

Connoley pulls a mulefoot hog loin from a chest freezer and points to the thick layer of fat surrounding it. That fat gives the meat a unique flavor that he's willing to pay a little extra for.

"It doesn't taste like the commercial pork we all know. It's not funky, it's not gamey," Connoley says. "It has a rich, clean flavor. It's such a special piece of meat."

Connoley uses the mulefoot meat in just about everything, including a Mexican mole made with local pawpaw fruit and the cafe's best-selling pork apple breakfast hash.

He also renders gallons of "beautiful, creamy white lard" from American mulefoot meat, which he uses in a variety of dishes.

"There's not a single piece of that animal that goes to waste, whether it's the skin that gets turned into chicharron or the fat that gets used in a number of different items," Connoley says. "Even the bones get roasted off to make a stock."

Taste aside, he says the ethics of working with mulefoot meat are the single most important factor to him.

"If I'm going to consume a life, I want to know that animal had a good life up until the point that it became food," Connoley says. "I know this animal was well cared for. It was allowed to run in the woods and forage for acorns. That means a lot to me."

This story comes to us from St. Louis Public Radio, a member station. Listen to the audio here. Follow Shahla on Twitter: @shahlafarzan