Accessibility links
Is The Pentagon Modifying Viruses To Save Crops — Or To Wage Biological Warfare? : The Salt The Pentagon wants university researchers to find ways to protect crops in the field using infectious viruses carried by insects. Critics think it looks like bioweapons research. 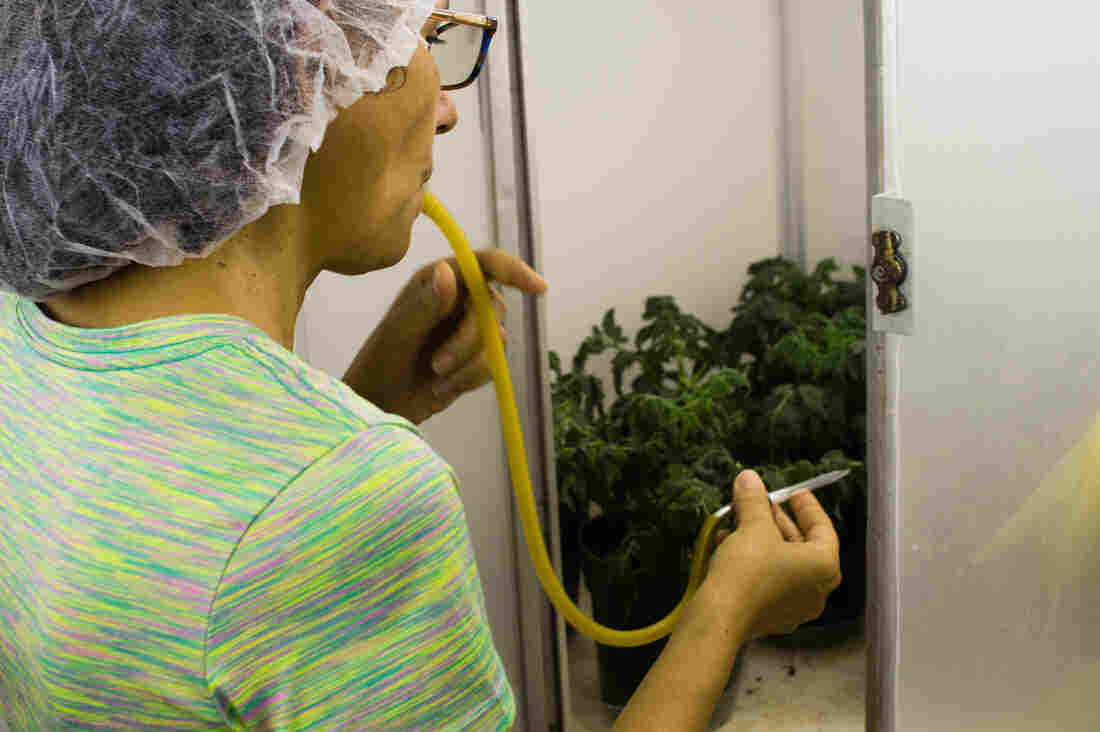 Alba Nava uses an aspirator to gather virus-carrying whiteflies that have been feeding on tomato plants at the University of Florida. Dan Charles/NPR hide caption 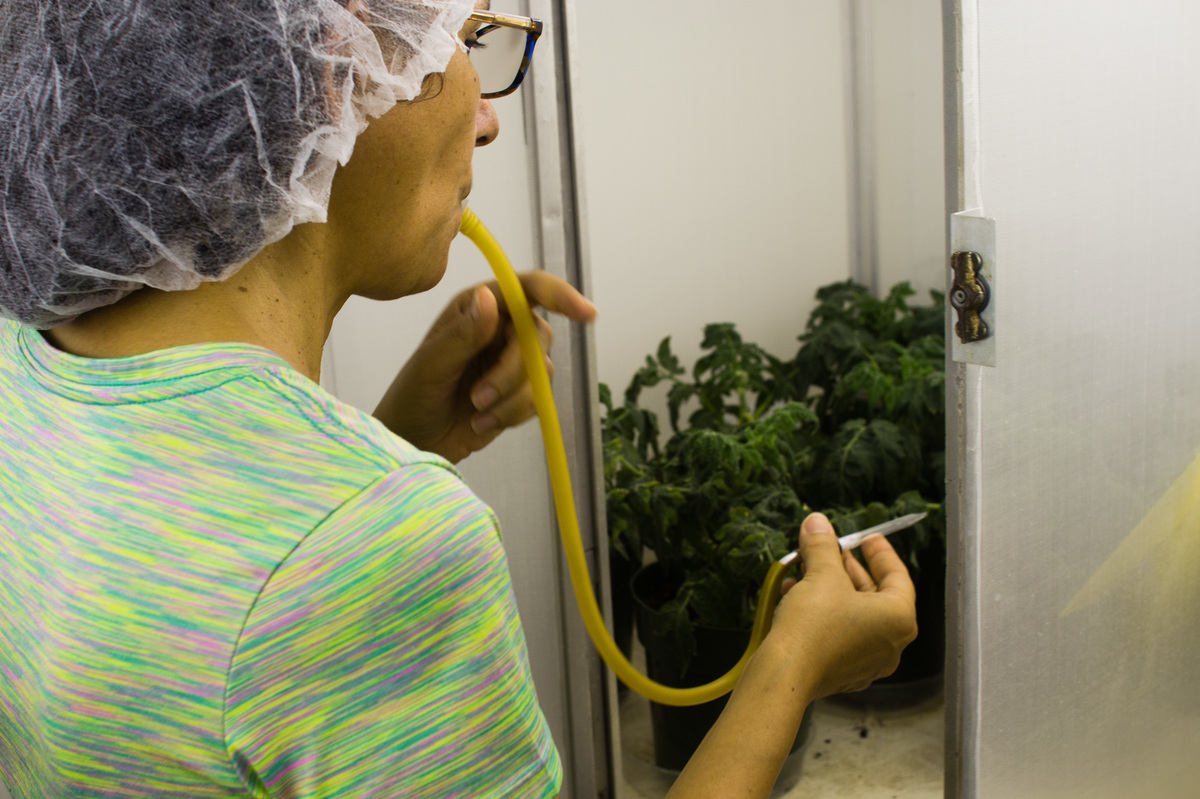 Alba Nava uses an aspirator to gather virus-carrying whiteflies that have been feeding on tomato plants at the University of Florida.

Jane Polston and I are walking over to some greenhouses at the University of Florida, where she's a professor. She wants to show me how viruses infect plants, which has been the focus of her professional life ever since she first learned about plant viruses, back in college.

We step inside the greenhouse, where I see a smaller chamber with walls of fine mesh and six tomato plants inside. They don't look too healthy. Their leaves are wilting. "This is our tomato yellow leaf-curl virus colony," Polston says.

The tomato leaves look like they're covered with dandruff. But when Polston reaches in and moves one of the plants, the white particles come alive. They're tiny flies — whiteflies. They're also infected. "Because they're reared on these infected plants, I think probably all of them will have virus in them," Polston says. 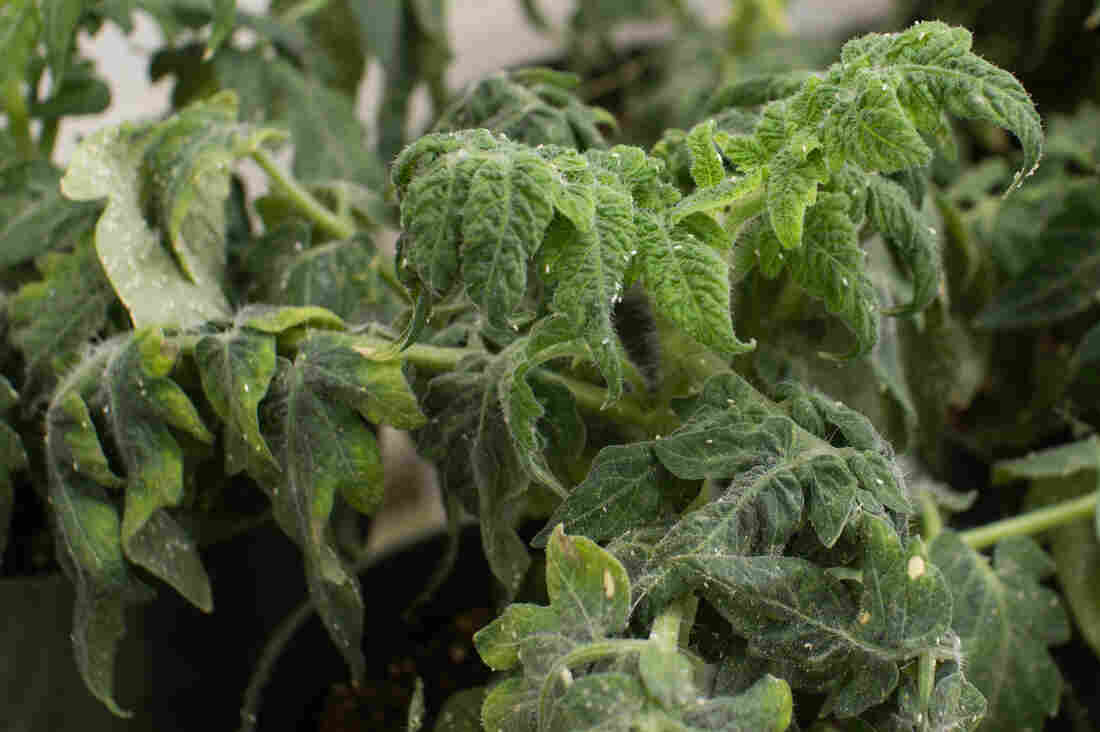 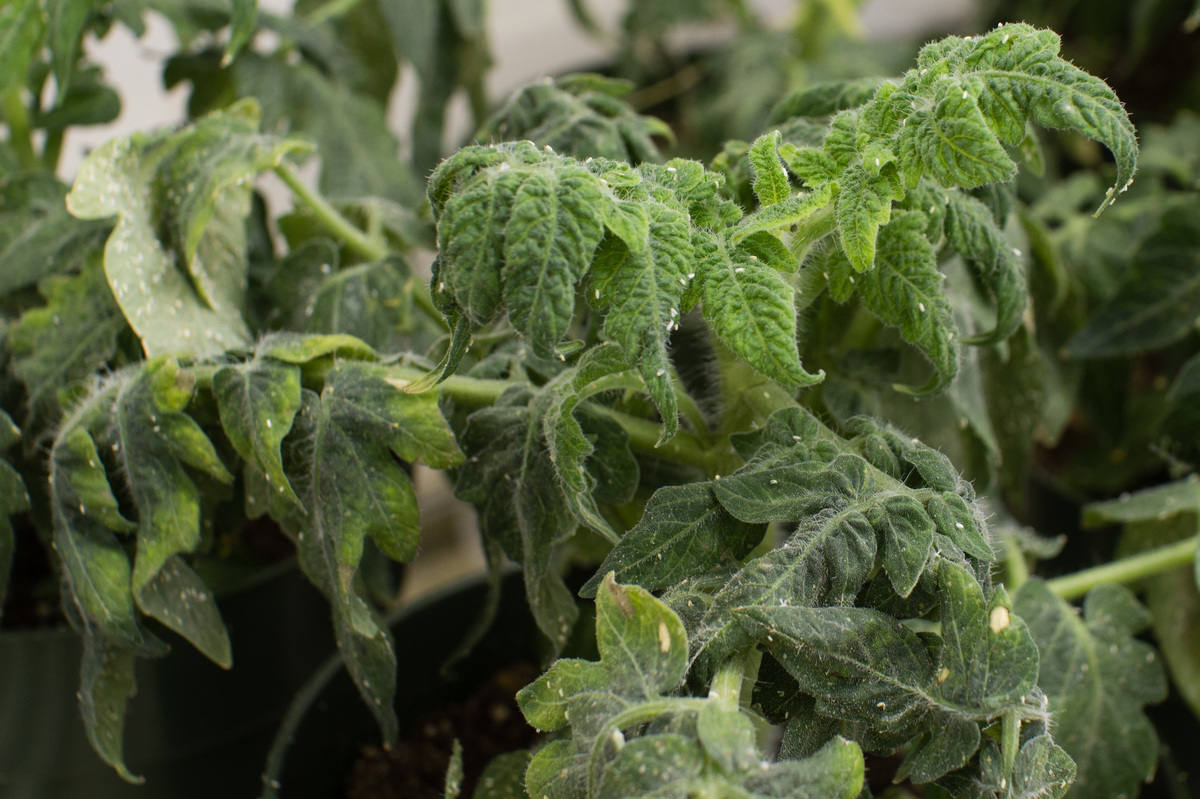 Whiteflies feeding on a tomato plant that infected with yellow leaf curl virus.

One of her colleagues, Alba Nava, scoops up some of these flies and puts them in a cage with a healthy, uninfected tomato plant.

"If you look carefully, you can see some of the whiteflies landing on the leaves," Polston says. The flies start feeding on this plant, and as they do, they infect it with the virus. The virus starts replicating and moving throughout the plant.

Polston spent years studying this triangle of virus, insect, and plant so that she could figure out ways to disrupt it — and stop viruses from harming crops.

But she's now getting ready to carry out a very different kind of experiment in a different greenhouse, a super-secure one that I wasn't allowed to visit.

What's going on in that greenhouse is the brainchild of Blake Bextine, a program manager at the Defense Advanced Research Projects Agency (DARPA). He thinks there's a way to use this infectious triangle for good.

"This is a beautifully elegant system that puts genes into plants, that causes negative effects. Why can't we turn this system upside down, and use it to deliver positive traits into plants?" Bextine says.

DARPA is funding Polston and several other groups of university researchers. Each group is using a different combination of insect and virus.

The viruses will be genetically modified so that they carry new packages of DNA. These new genes are supposed to help the plants — perhaps help corn survive a drought, for instance.

"If a drought is coming, we could actually use the insects to deliver viruses that carry with them the payload — that drought tolerance capability," Bextine says. 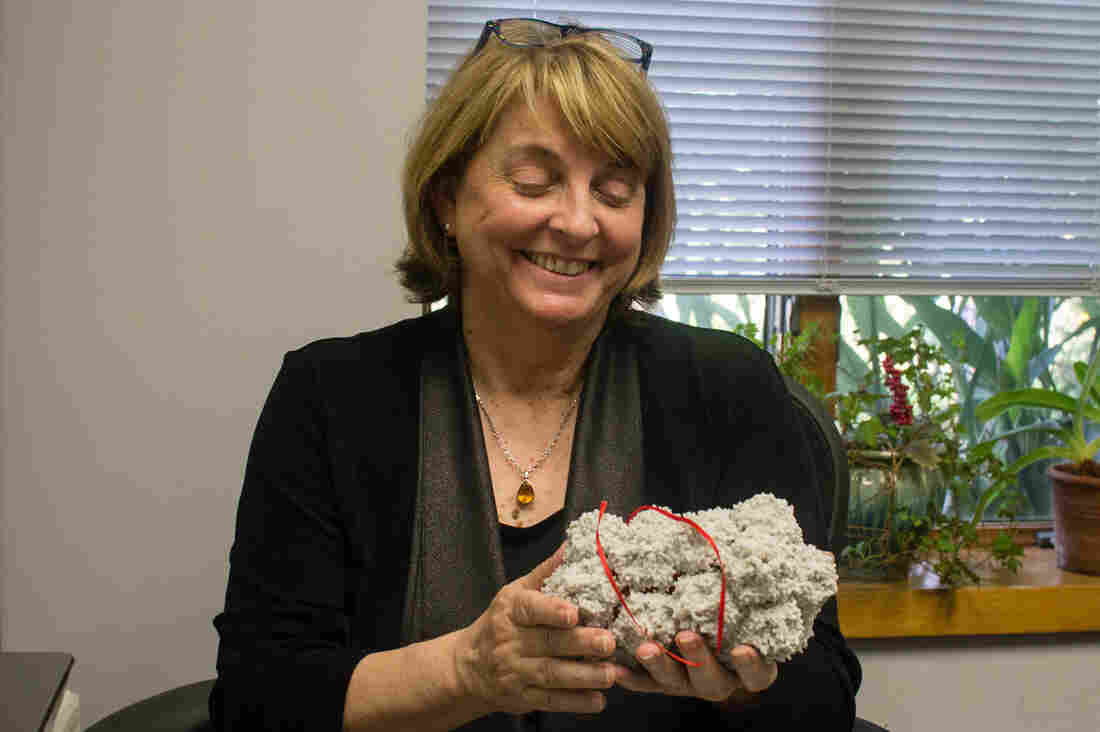 Jane Polston, at the University of Florida, holds a model of a virus that infects tomato plants. Dan Charles/NPR hide caption 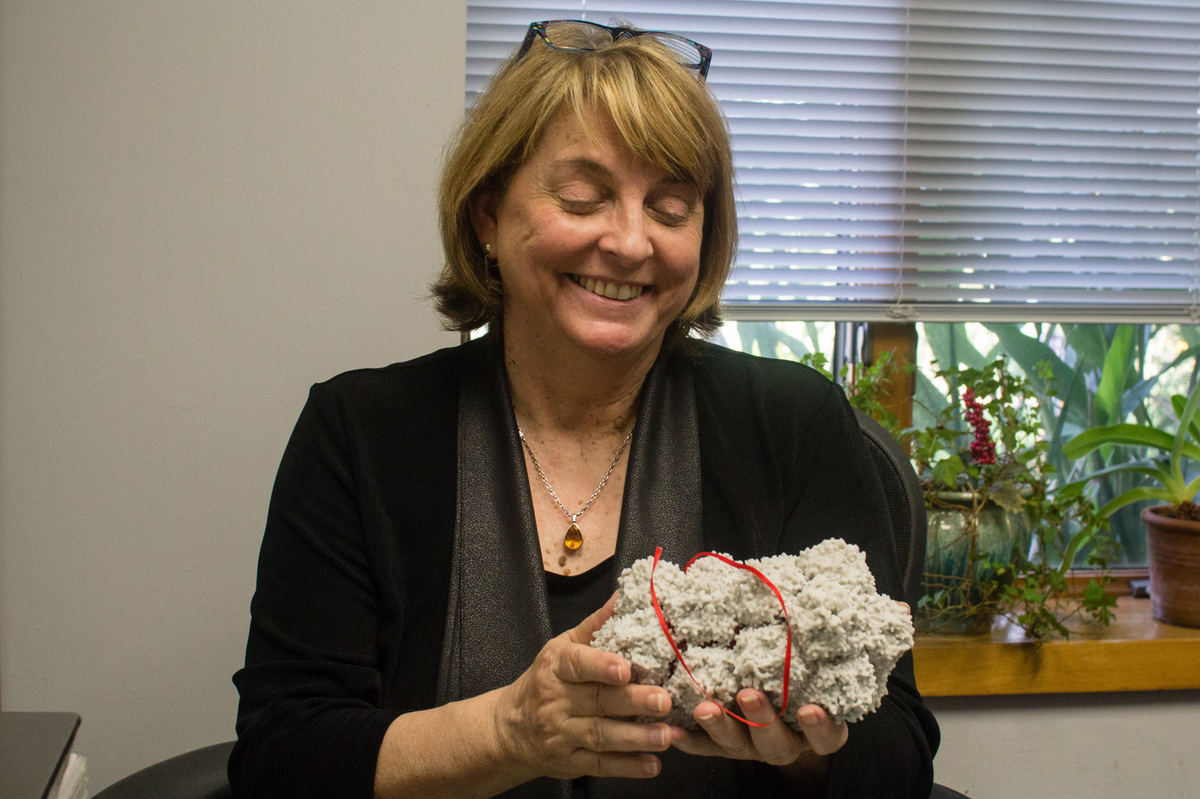 Jane Polston, at the University of Florida, holds a model of a virus that infects tomato plants.

The insects are supposed to be genetically altered, too, to make sure they all die after they accomplish their mission.

But all this talk of genetically modified insects delivering "payloads" sounds disturbing to Silja Voeneky at the University of Freiburg, in Germany.

Her specialty is international law, including the Biological Weapons Convention, which the United States ratified in 1975. The BWC bans the use of living organisms such as bacteria or viruses as weapons of war.

And to Voeneky, the peaceful puposes that DARPA has proposed don't really seem plausible. If one is trying to protect a crop, just spray it, she says. Why resort to uncontrollable, unpredictable tools like genetically modified insects and viruses?

"It seems much easier to harm a plant with this technology than to make it more resilient," she says. It's pretty easy to imagine using modified insects and viruses during wartime to destroy an opponent's crops. So the research risks being perceived as a violation of the Biological Weapons Treaty. She recently co-authored a commentary in the journal Science calling for more public debate about this research.

DARPA's Blake Bextine insists that Voeneky's suspicions aren't justified. "We are not developing biological warfare agents," he says. "This is for the benefit of crops and the stability of our food supply."

Jane Polston, the University of Florida scientist, agrees: "We're not going to do anything scary with it," she says. But she also points out that new technology can be used in many ways, including ways that one can't predict.