Accessibility links
Sourdough Hands: How Bakers And Bread Are A Microbial Match : The Salt In Robert Dunn's new book, Never Home Alone, he explores our symbiotic relationship with food: Not only do we impact the bacteria in our food, but the microbes in our food imprint our bodies. 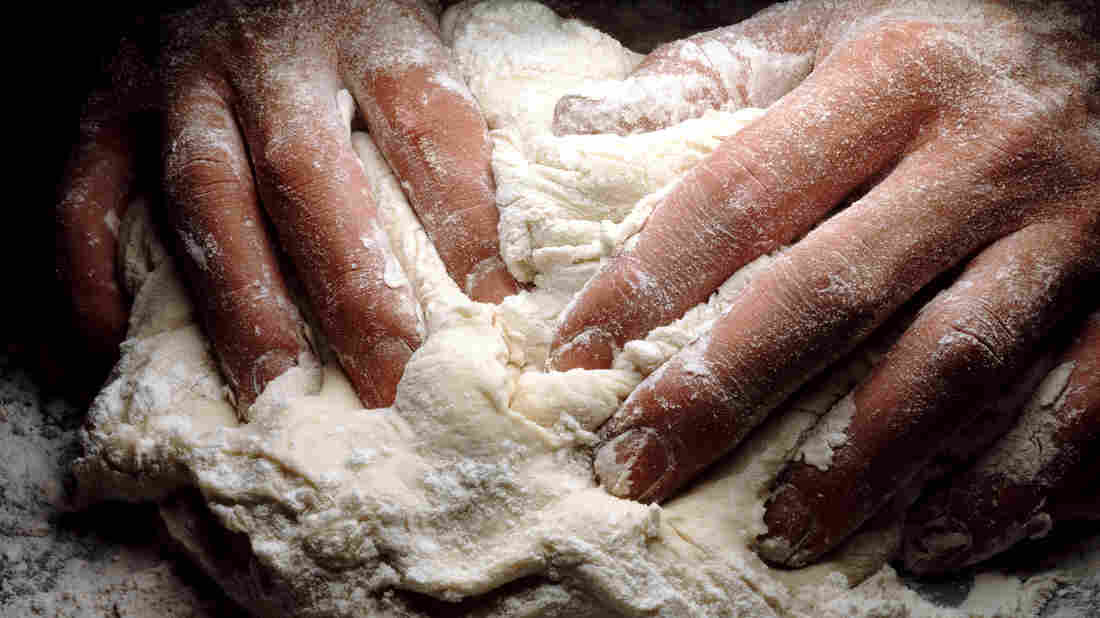 "Our data suggests that something about baking seems to be changing the hands of the people who do the baking," says ecologist Rob Dunn. Rick Gayle/Getty Images hide caption 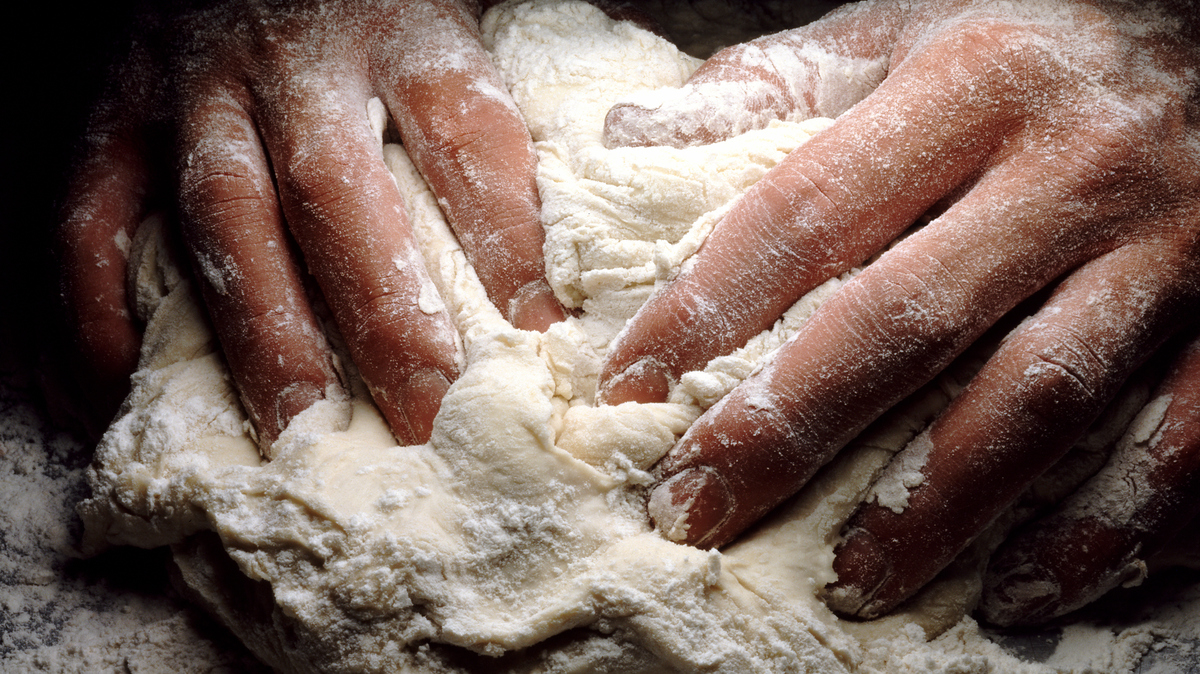 "Our data suggests that something about baking seems to be changing the hands of the people who do the baking," says ecologist Rob Dunn.

If you bake a lot of sourdough bread, your hands might look like your loaves. Bacterially speaking, that is. The microbes found on bakers' hands mirror the microbes within their starters — the bubbly mix of yeast, bacteria and flour that's the soul of every loaf. 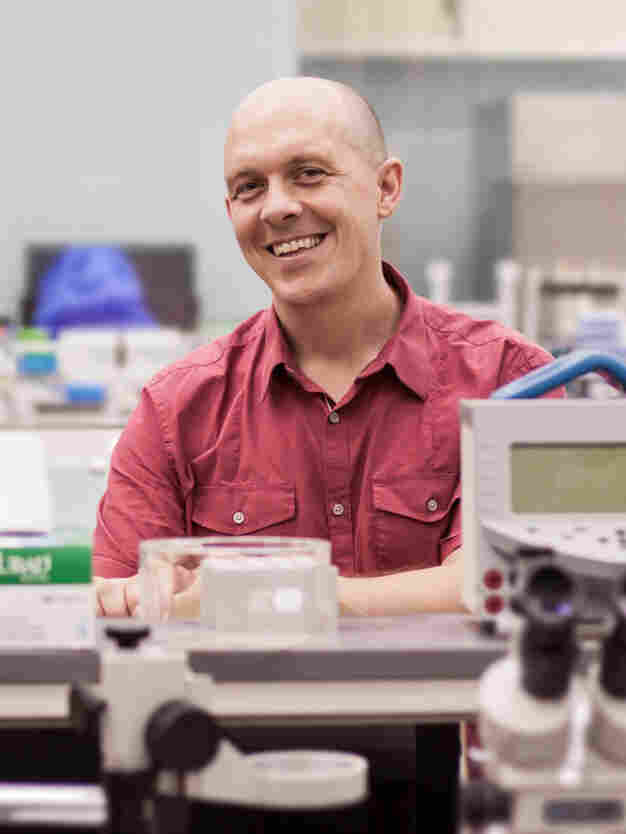 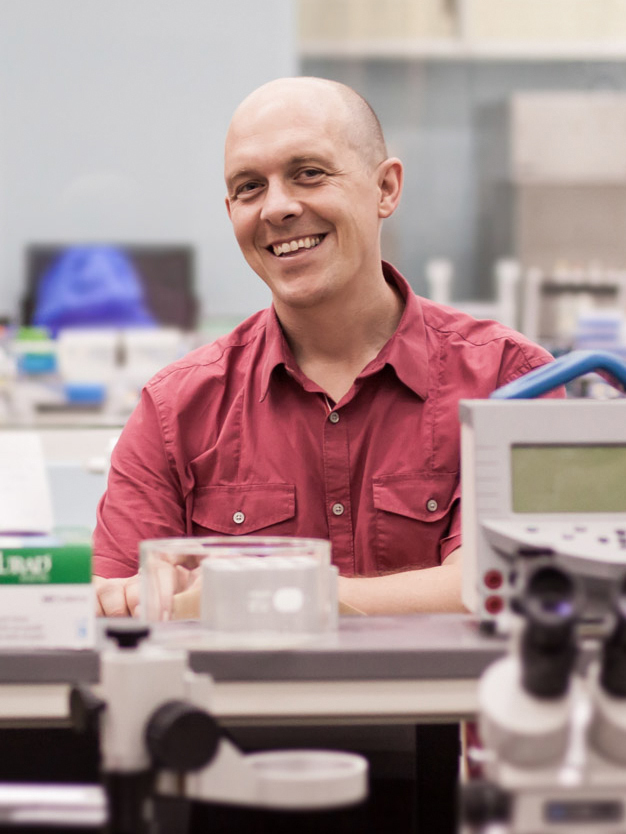 Author and scientist Rob Dunn helped conduct an experiment to explore the microbial interaction between bakers and sourdough bread.

That's the surprising finding from a sourdough bake-off experiment, coordinated by ecologists Rob Dunn and Anne Madden. Fifteen sourdough experts from around the world arrived at a Belgian baking center with brand-new homemade starters, fed from the exact same ingredients sent from Dunn's lab. But before the bakers could get their hands into the dough, they held them out to Madden for bacterial swabbing.

Partnered with analysis of the starter's microbial ecosystem, Dunn and his collaborators were able to draw a close connection between bread, bakers and their bacterial species.

In his new book, Never Home Alone, released Nov. 6, Dunn explores the species behind what he calls the "wild life" of our homes. "There's a lot more life in our houses than we think," he explains. "To the extent that we've thought about it, we've tried to kill it."

It's no surprise, then, that Dunn's survey of indoor species (including insects) lands him in the bakery with sourdough, which is brought alive by microbes. The experiment delves into how cooking with fermented foods might affect the microbes of the people who make them. In the book, Dunn describes how he formed the hypothesis that our bodies and environments influence the taste of our food.

The following interview has been edited for brevity and clarity.

Where did the idea that hands and home affect the flavor of food come from?

How did you come up with an experiment to test that idea?

We teamed up with the Puratos Center for Bread Flavour, which is a super cool bread museum, research and conference center in the tiny German-speaking part of eastern Belgium. The ideal experiment would have people from different regions, both men and women, from different styles of bakeries. That would maximize the kinds of ways that their bodies and bakeries might influence what they were contributing. That's where Puratos was super helpful, because they were able to recommend bakers around the world who could come together at this bread center to do the experiment. The hope was to get them all to make the same starter except for the microbes, then bring them together, and all make the same bread. So we could test the starter, we could test their hands, and we could test the consequences for the bread itself. 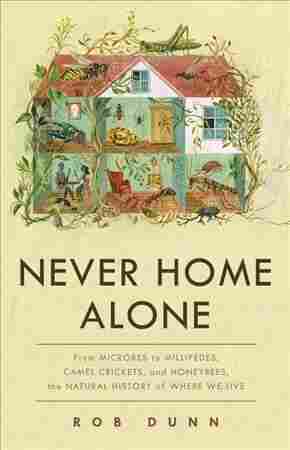 From Microbes to Millipedes, Camel Crickets, and Honeybees, the Natural History of Where We Live

Title
Never Home Alone
Subtitle
From Microbes to Millipedes, Camel Crickets, and Honeybees, the Natural History of Where We Live
Author
Rob Dunn

What were the results?

The starters were super different, and those differences were in part associated with who made them, and where they made them. There was an essence of the baker in the starter the baker made, and that was conveyed in the bread. That was one result.

The other one, which our design wasn't perfect for, but was the crazier one to me, was that we'd swab the hands of the bakers to figure out what was on their hands, and it was the same thing that was in the starter. We hadn't thought to wonder if the baker's hands themselves would be unusual. But lo and behold, the baker's hands looked like sourdough. So yes, the bakers did influence their starters, but the other way around was true too. The life of baking seems to influence the bakers.

Can you describe what you mean by "Their hands looked like sourdough"?

The most common sourdough starters are lactobacillus bacteria and their relatives. And the most common yeasts are saccharomyces yeasts and their relatives. If we look at the average human hand, those bacteria and those yeasts are really quite rare — three percent maximum of fungi on the hands. On the bakers, they were in some cases up to 60 percent of the bacteria in particular on the hands. Which is to say that the hands looked more like sourdough in terms of the microbes they had more than they looked like the hands of the plumber or the professor.

So, based on their bacteria, if you were to try to pick sourdough hands out of a lineup, those hands might look like the starter itself?

Yeah, they would probably look like a funky starter.

People have such a personal connection to their starters. Would you say that that's backed up by the science at this point?

How much bread do you have to bake to have sourdough hands?

That's a good question, and I don't know the answer. But if I were to speculate, I bet it doesn't take a lot of baking to change your hands a little bit. But if you really want those total baker hands, I think that's touching bread as much as you touch people.

Lindsay Patterson is the producer and co-host of Tumble, a science podcast for kids. She lives in Barcelona with her husband and son. Follow her on Twitter: @tumblecast