Accessibility links
In 'Solo,' Chef Anita Lo Celebrates The Art Of Cooking For One : The Salt Meals for one should not be a sad or boring affair, says Michelin-starred chef Anita Lo. In her new cookbook, Lo goes beyond bitter greens, blue cheese and monkfish to serve up fun meals for one. 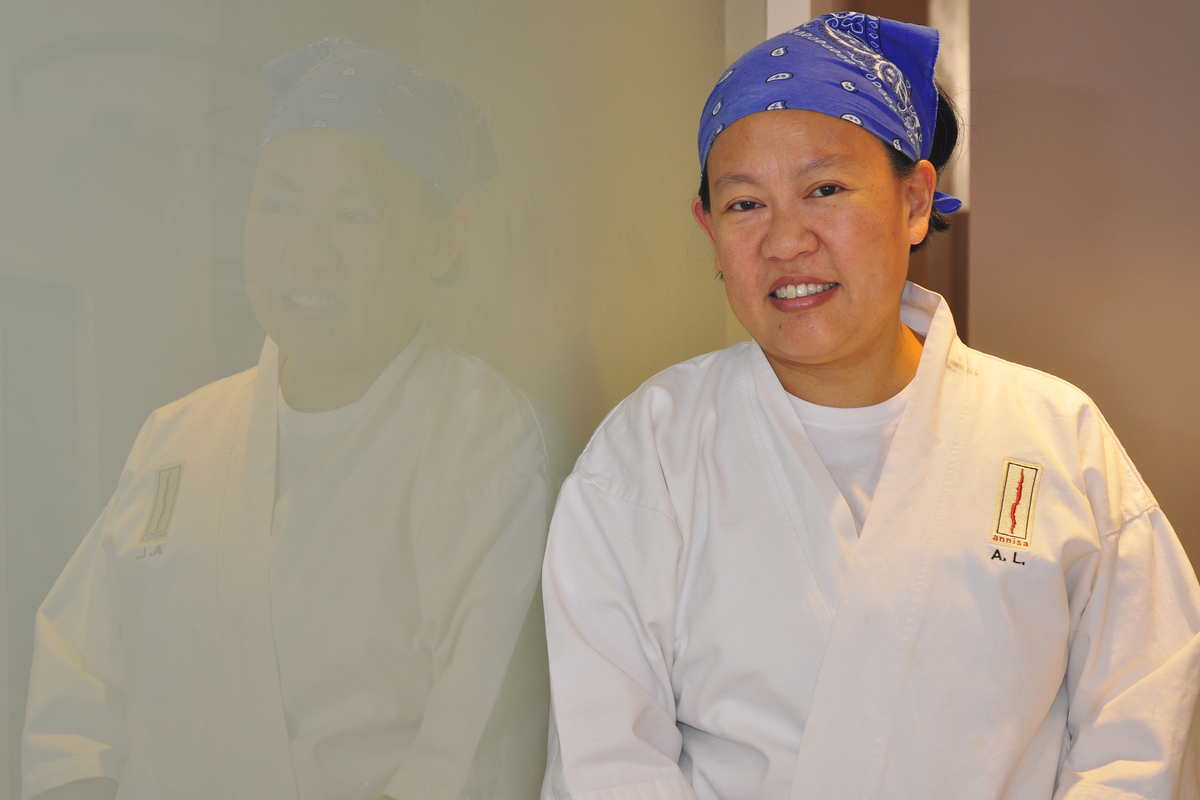 Cooking is about community. But it can also be about solitude.

That's where chef Anita Lo's latest cookbook, Solo: A Modern Cookbook for a Party of One, comes in.

"Food is culture, food is identity. So it's reaffirming to cook the things that either you grew up with or the things that you love," Lo says — whether it's for your whole family or just yourself.

After working at restaurants such as Bouley, Maxim's in New York and Chanterelle, Lo ran her own restaurant, the Michelin-starred Annisa in the heart of Manhattan's Greenwich Village, from 2000 until last year. She has appeared on Top Chef Masters, Iron Chef America and Chopped. And in 2015, she became the first female guest chef to cook at the White House.

As Thanksgiving approaches, Lo speaks with All Things Considered host Ailsa Chang about the art and joy of cooking for one.

For China's President, An Evening Of Lobster And Lamb From Chef Anita Lo

I love how you started this book: "I've been dumped almost as many times as I've been in relationships — and I can count those on less than two hands. Spread over my 50-year life span, that's a lot of solo meals." That's how you mastered cooking for one, right?

That might have been an overstatement, but food has saved me in many instances like that. There was one time where I was dumped by a girlfriend of ... two years. I was devastated, really devastated, and my parents came to town and they took me out to dinner and we went for my first kaiseki meal, which is a fancy Japanese meal of many, many courses, and it is very seasonal. And I had all of these things that I've never had before, and I was so devastated at that point, but in that meal, I was like, "Oh my God, this is so cool." And I just felt rejuvenated. 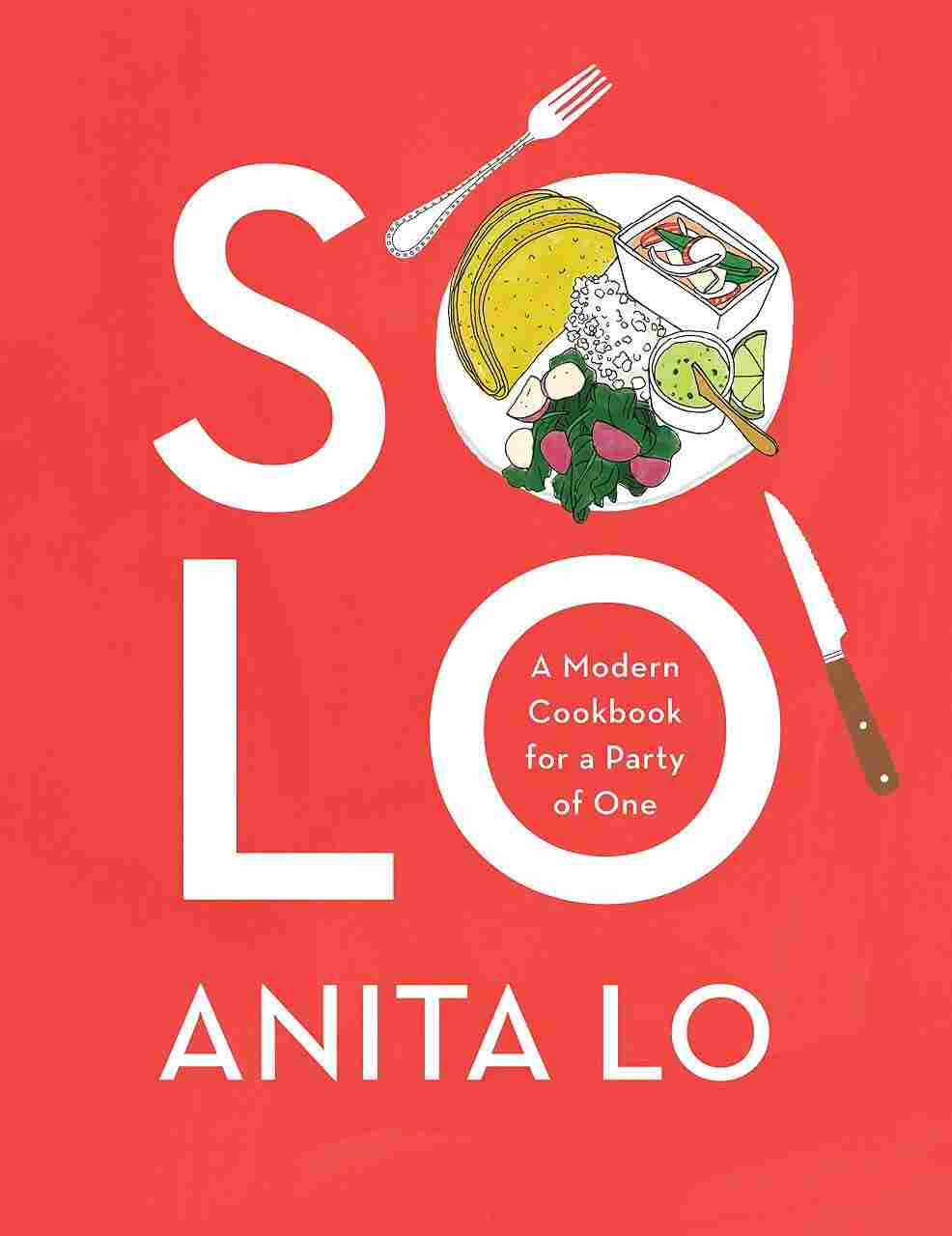 A Modern Cookbook for a Party of One

Read an excerpt of Solo

For people who want to wallow in their loneliness, there are recipes like "A Single Broken Egg On A Bed Of Torn, Wilted, Bitter Greens With Blue Cheese." This is like a sadness plate! When did you come up with this recipe? After a breakup?

I probably came up with this recipe for this book, but I had many of those types of recipes over the years at Annisa for Valentine's Day. Actually, I always thought Valentine's Day was a cheesy, Hallmark holiday. But you always have to have a special menu. So I always had plenty of things with hearts, passionfruit and stuff like that. But then I always wanted to have a dish for the lonely person, like a "monkfish ...."

What is it about cooking for one's self that's such a hard mountain to climb? Is it only the trouble or is there some deeper psychological block?

I think it is a deeper psychological block. Everyone says, "Why would I go through all of that trouble for just myself?" Why not? You can't give to other people and share with other people if you're not taking care of yourself.

What is a good Thanksgiving recipe for one?

In my book there is a broiled squab with roasted carrots and carrot top zhoug, spicy condiment from the Middle East. What's great about this recipe is that it is a whole bird, a little bird, it's very fall, it's root vegetables and dark meat. And squab is sort of celebratory. It's not hard to do, but it's a little more "chefie."

Are you allowed to gnaw on a squab drumstick?

Oh yeah, I think you're supposed to, actually.

Connor Donevan and Emily Kopp produced and edited this interview for broadcast. Leslie Ovalle adapted it for the Web.

You people eat too much chicken. I know this because every cookbook editor I've ever met asks for more chicken recipes. This one did! Overcrowded chicken factories? Hormone-pumped superbirds? Your fault! Okay, maybe it is our collective responsibility as a culture. And I know, guilting people into trying a new food rarely works — but squab is rich and delicious and has been eaten since ancient times in places all over the planet. That many people can't be wrong. While it's a little expensive and harder to find, making it  at home costs a fraction of what you'd be charged at any fine-dining establishment, and it's available at the click of a button online if you can't find it at a local specialty grocery store. This recipe celebrates where this bird perhaps was first eaten — in the Middle East. And it makes use of carrots and their tops in the spicy Middle Eastern condiment, zhoug or zhug, depending on where in the Middle East you might find yourself. Of course, if you must, you can substitute a Cornish hen, which is really just a little chicken, and cook it for a bit longer, about 10-12 minutes, depending on the size.

1 bunch baby carrots (or 1/2 bunch adolescent ones), tops removed but leaving 1/4 of green attached to the carrots

1 bunch baby carrot tops, washed (substitute parsley for the tops if your carrots didn't come with them)

1 tablespoon chopped jalapeño (or to taste: if your jalapeño has no heat, you can try a serrano, or add a little cayenne)

Preheat your oven or toaster oven to 350 degrees F. Using scissors, cut through the back of the squab between the legs and wings and lay flat on a plate. Pat the bird dry with a paper towel and rub in the V clove garlic, cumin, lemon juice, and olive oil. Allow to marinate at room temperature while you prepare the other ingredients.

Toss the carrots with ample olive oil, then season with salt and pepper and bake on a small tray until browned and soft, about 20 minutes. Sprinkle the caraway seeds over the top for the last 5 minutes of cooking.

Meanwhile, make the zhoug: Place 1/3 cup of the washed carrot tops, roughly chopped, into the container that your hand blender came with, along with the cilantro, jalapeño, garlic, cumin, coriander, and olive oil and puree with the hand blender until smooth. Add a tablespoon of water to the mix if needed to get the blades going. Season to taste with salt and pepper.

When carrots are done, keep warm in tin foil, or on top of the toaster or oven while you broil the squab. Turn the oven to broil and season the squab on both sides with salt and pepper, leaving any excess marinade on the plate. Place squab on a tray, skin side up, and broil, 4 inches from the heat source, until skin is browned and crisp and meat is medium rare, about 6 minutes. (Squab, unlike mass-produced chicken, is safe and better served medium rare.) Serve with the carrot top zhoug, carrots, and some warm pita, or Chickpeas in Tomato.

Excerpted from SOLO by Anita Lo. Copyright (c) 2018 by Anita Lo. Excerpted by permission of Alfred A. Knopf, a division of Penguin Random House LLC. All rights reserved. No part of this excerpt may be reproduced or reprinted without permission in writing from the publisher.