Accessibility links
Mexico's Endangered Stingless Bees Mysteriously Find A Sweeter Home In Cuba : The Salt The bee, cultivated and revered by the Maya for thousands of years, is leaving its shrinking habitat for the Caribbean island, which uses its small-batch citrus-flavored honey mostly in pharmacies. 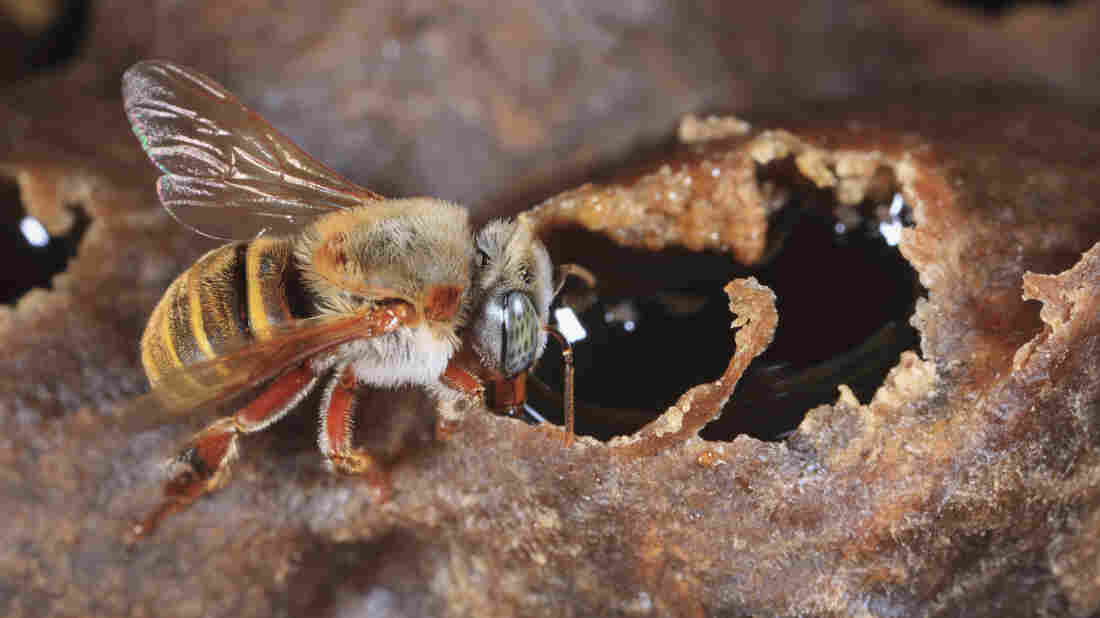 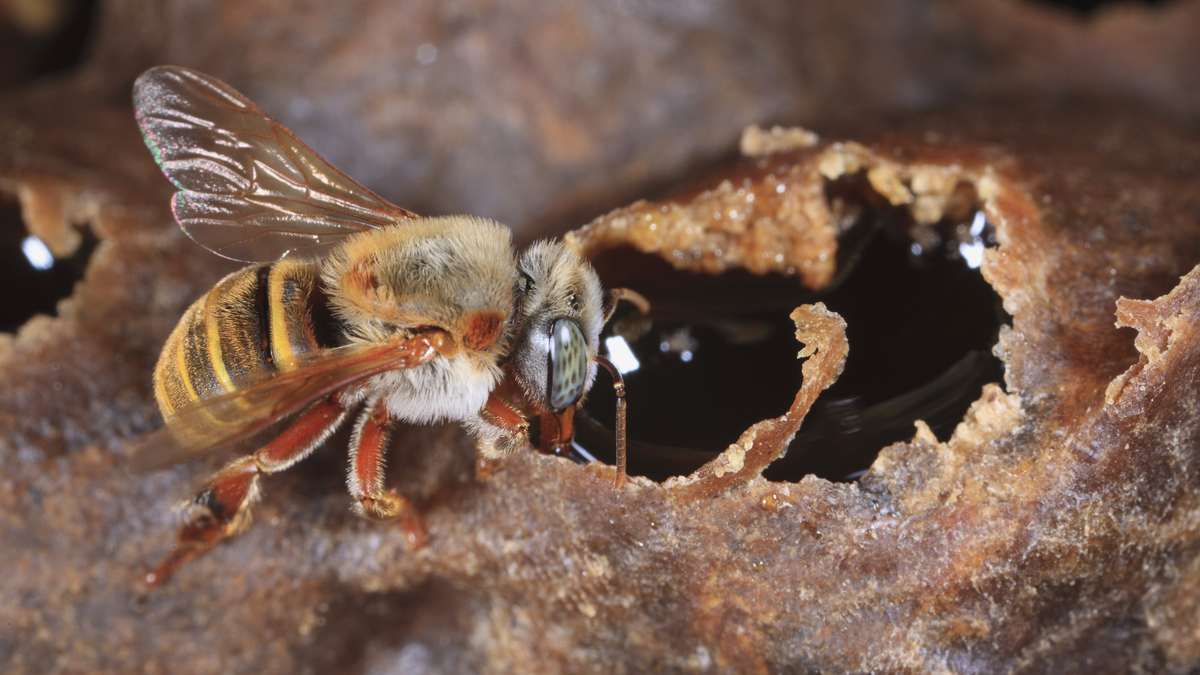 A stingless Mayan bee (Melipona beecheii) gorges itself with honey during the harvest in Yucatan, Mexico.

A rare, stingless bee cultivated by the Maya more than 3,000 years ago may be going extinct in its natural Yucatan Peninsula habitat in Mexico, but a mysterious relocation to Cuba may save its future.

A combination of hurricanes, pesticides and logging is leading to the decline of these unique bees, called Melipona beecheii.

Melipona nest in odd-looking log hives in large, hollowed-out trees. When the hives are removed from the trees for cultivation, they are called jobones. The bees have small colonies and don't form honeycombs.

"They don't have frames or vertical comb," says evolutionary ecologist David Roubik the "bee man" of the Smithsonian Institution. Instead, "They have storage pots that are squished and left to drain into some basin." Although the bees do not sting, they will bite to protect their hives.

But the biggest difference between Melipona and European honeybees is the honey they produce. Roubik describes it as having more of a citrus flavor than commercial honey, with a longer aftertaste.

"It's much tastier honey," says Drexel University entomologist Meghan Barrett. "It's runnier. It's more floral. It's very delicious, but [there are] much smaller amounts of it, so you need a lot more bees."

The native peoples of the Yucatan practiced bee husbandry for thousands of years. Melipona honey was the primary sweetener in food. Only the arrival of sugarcane, brought by Europeans in the 16th century, supplanted the culinary use of honey. Sugarcane is faster and easier to grow than tending jobones, and produces a much larger yield.

Steve Buchmann, a pollination ecologist at the University of Arizona, says that the stingless bee only produces about one to two liters of honey per hive a year (compared to about 70 liters from a typical honeybee), but that small volume can be worth about $30 a liter, if not more.

The honey is now rarely used as a sweetener; its primary use is actually medicinal. Buchmann says, "It's used somehow to aid childbirth. And it's also used to help with the treatment of cataracts in the eye." Roubik acknowledges there are other homoeopathic uses. "Many people know and use its honey as 'medicine' mostly for sore throat or asthma. [The honey is] part placebo, part really an aid for skin irritation and bacteria," he says.

The ancient Maya also honored the Melipona in religious ceremonies. A priest would preside over the harvesting of honey twice per year. There are a few beekeepers left today who still observe the ancient religious practices, but a more comprehensive record of the bee's religious importance can be found in the Madrid Codex, one of only three verified remaining codices made by the ancient Mayans around 1,100 years ago. A surprising proportion of the codex depicts beekeeping methods and the Mayan bee god, Ah Mucen Kab.

"He's a deity often figured as holding a cluster of something that look like grapes in his hand," says Buchmann. "And those are the adhering honey pots, just like you find when you open a nest or a managed colony of the bees." 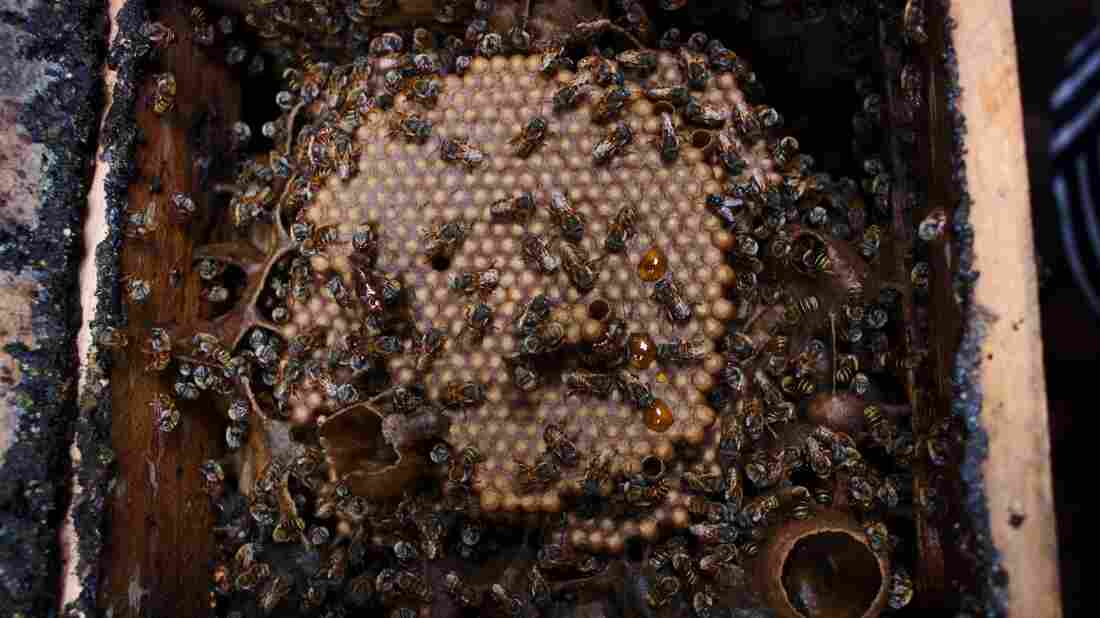 In a Melipona beecheii hive in Cienfuegos, Cuba, bees are completing their tasks, which range from returning pollen and nectar to the hive to nursing new bees. Zachary Smith/NPR hide caption 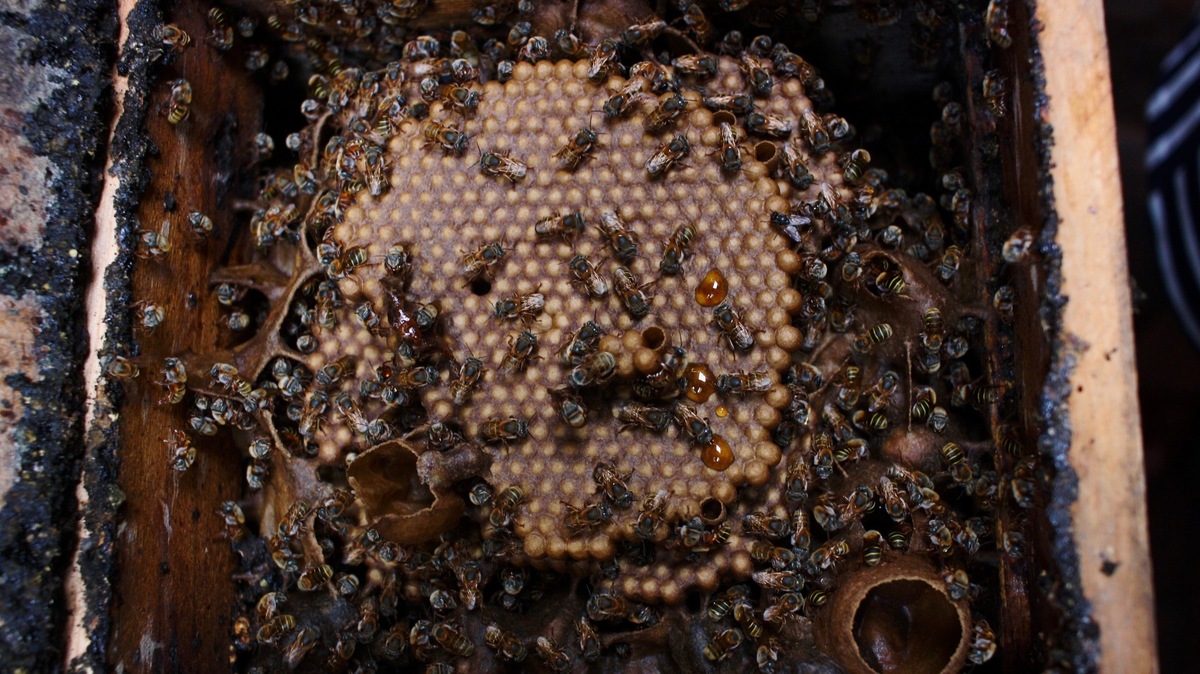 In a Melipona beecheii hive in Cienfuegos, Cuba, bees are completing their tasks, which range from returning pollen and nectar to the hive to nursing new bees.

A shrinking habitat usually spells the end for a niche species like Melipona, and the ancient practice of Mayan beekeeping is also fading away.

"A lot of the beekeepers [in Mexico] are aging males and as they die off or choose not to pass it along to their children or relatives, the art of Mayan bee craft dies off," Buchmann says.

But a seaward voyage might prove to be the Melipona's saving grace.

Scientists still aren't sure when the bees arrived in Cuba or how they got there. In fact, Barrett recently visited the Caribbean island to lay the groundwork for future research. She's trying to answer these questions of origin as well as study the DNA of the Melipona. Working with veterinary professor Jose Machado at Cuba's University of Cienfuegos, Barrett is advising a student how to set up hives for agriculture research while working on getting permits to collect the DNA samples necessary for her genetic research.

Barrett says raising stingless bees in Cuba is about as common as hobbyist beekeeping in the United States. But instead of selling the honey in regular stores, Cuban beekeepers generally sell it to pharmacies or neighbors.

Barrett tells the story of her sole day off while visiting Cuba. "We're just sitting on the beach and all of the sudden this Melipona bee lands on my hand. And I'm like, 'What? This is my day off! I'm not supposed to be seeing any of these.'"

Barrett says it's interesting to think about how the relocation of the bees is sort of a successful conservation effort. "You're conserving them, just not in their natural zone," she says.

And thanks to Cuban beekeepers, you may be able to taste Melipona honey sooner than you think.

Sadie Witkowski is a PhD Candidate at Northwestern University in Chicago. You can find more of her science writing here or follow her on Twitter: @sadiewit.