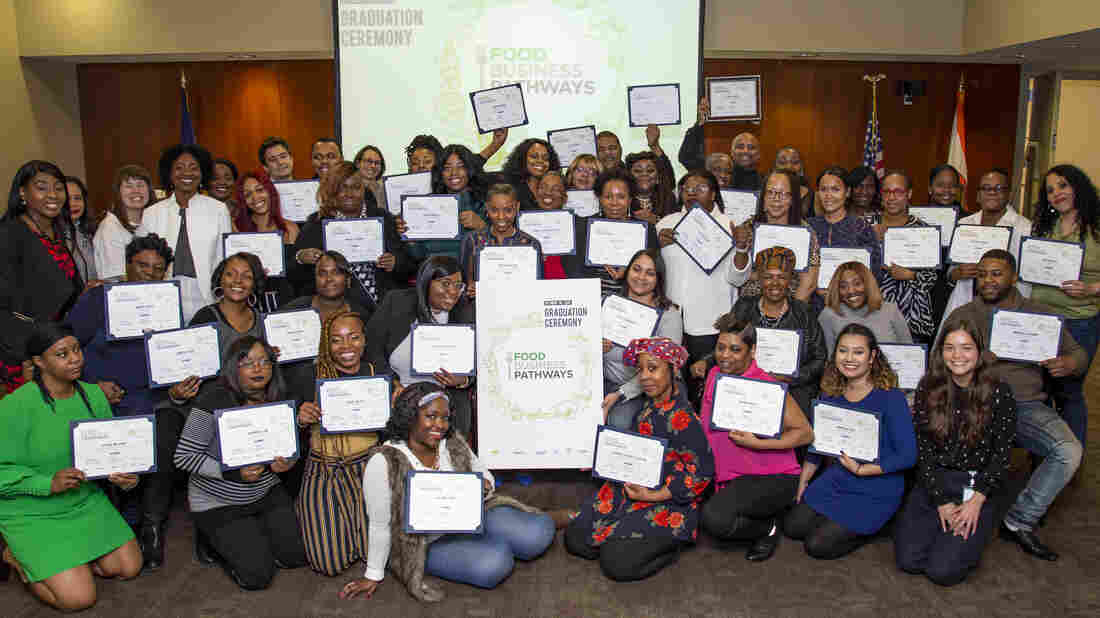 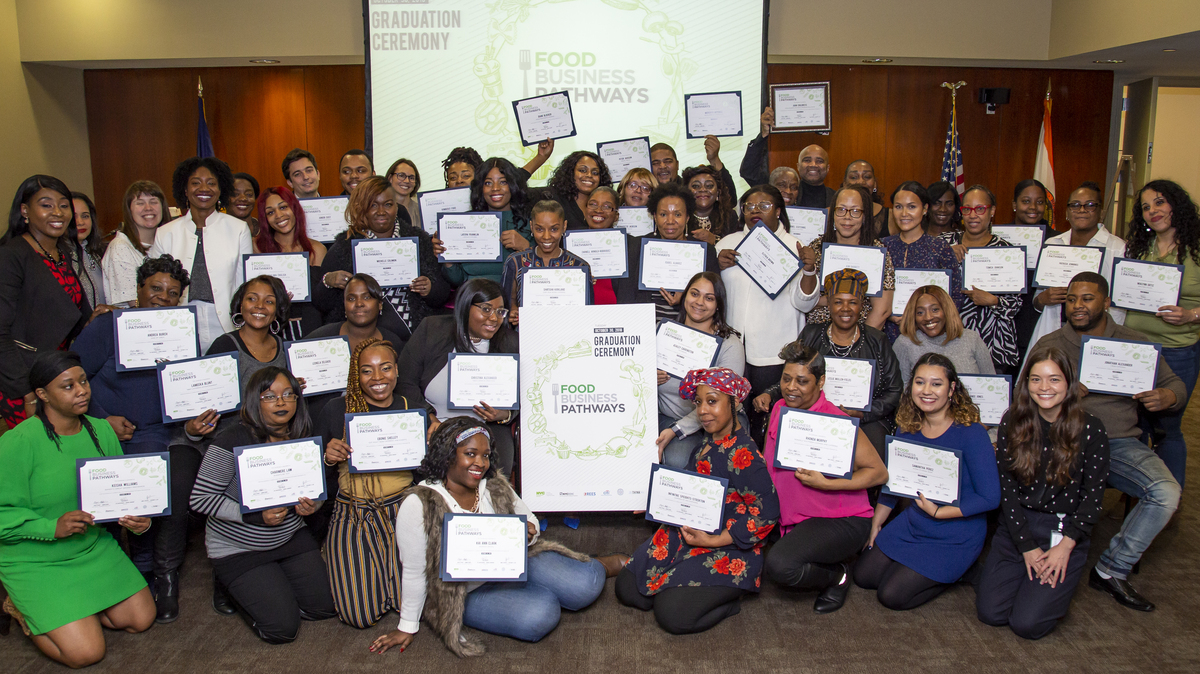 Joann Poe had been a field technician for Verizon for nearly 20 years when she saw the flyer. Hanging in the lobby of her apartment building, a public housing unit in the Bronx, N.Y., it announced a free training program to help residents launch their own food businesses.

"It must be a hoax," she thought. She walked by without writing down the number.

But Poe couldn't stop thinking about it. Her friends had long encouraged her to open a bakery. They loved her sweet potato pies and her magical layer cakes, frosted and decorated to the nines, like something from an episode of Netflix's Sugar Rush.

"People used to ask me to make cakes for them, but I never thought of it as a career," she says. A single mother of two — she has a 24-year old son with Down Syndrome and a 13-year old daughter — she was fairly certain a bake shop of her own was not going to be part of her life plan. But her thoughts kept returning to that flyer. Finally, she thought, "What do I have to lose?" She called the number. It wasn't a hoax.

Poe now owns her business, Best Dressed Cupcakes, where she bakes magnificent, intricately decorated cupcakes as well as boozy cupcakes called Happy Spirits. Her confections have been served at A-list events such as The Harlem Eat Up and Summer Stage; her corporate clients include Capital One, Kate Spade, and CitiGroup. 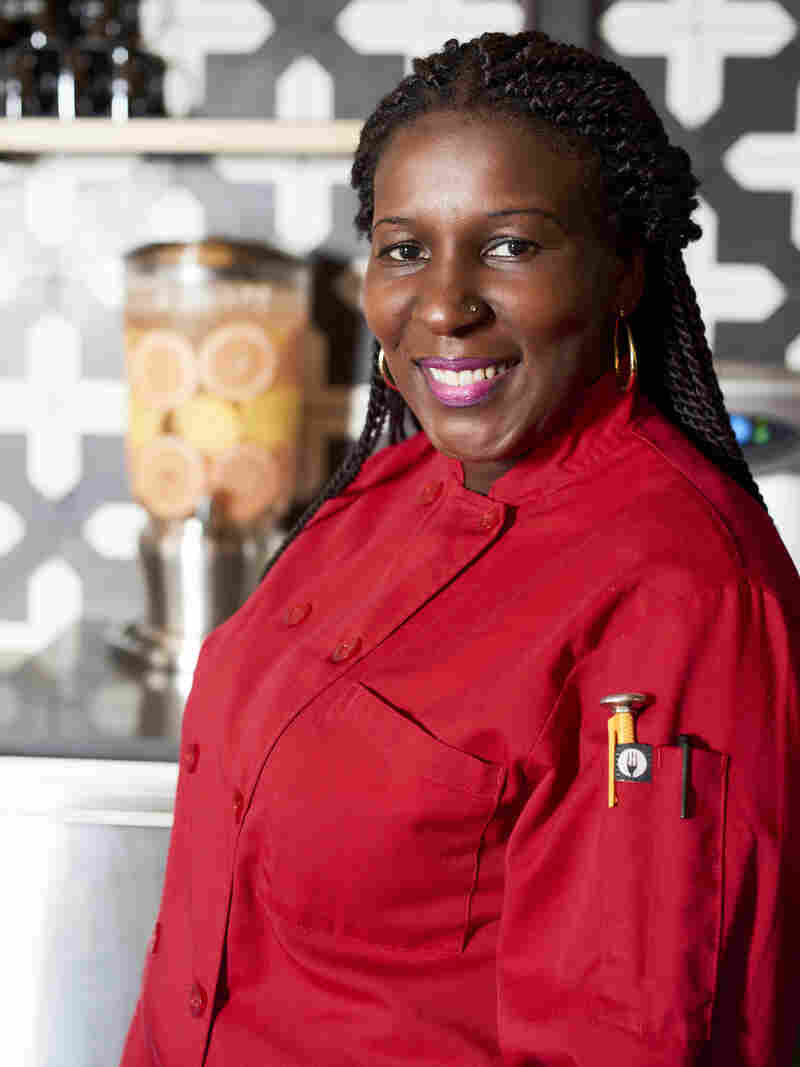 "People used to ask me to make cakes for them, but I never thought of it as a career," says Joann Poe, owner of Best Dressed Cupcakes. Caio Ferreira /Start Small Think Big hide caption 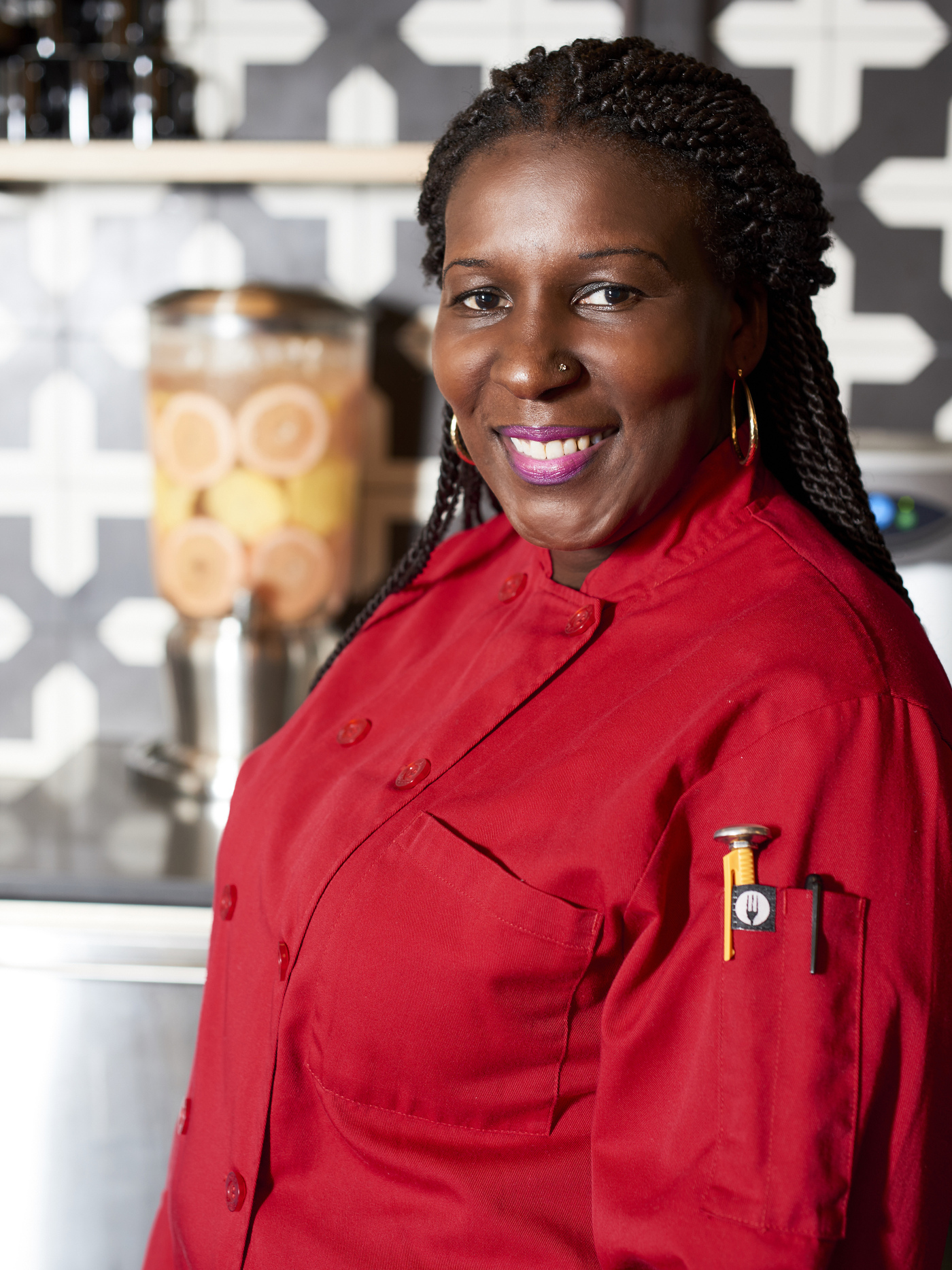 "People used to ask me to make cakes for them, but I never thought of it as a career," says Joann Poe, owner of Best Dressed Cupcakes.

"I never thought I would be a business owner," she says. "It was the best thing that I have ever done."

Since its inception in 2015, the FBP course has been offered nine times, with a total of 271 graduates. Of those who have graduated, 82 percent have registered their businesses. Graduates include DAM That's Good Cake, Grace Kelli Cupcakes, Chef Sherri's Catering, Munch Hours, Cornel's Catering, Bad Gurls Burgers and A Cake Baked in Brooklyn.

The initial idea came from New York City Mayor Bill de Blasio, who, in 2014, tasked the New York City Economic Development Corporation (EDC) with spurring small-business growth by assisting low-income residents with their ventures. The EDC approached the NYCHA, home to nearly 600,000 low-income New Yorkers. Based on feedback from a 2013 survey of residents, the agencies devised a plan to create a food-business entrepreneurship program.

"We sat down with EDC and SBS [the New York City Department of Small Business Services] with a goal of weaving together all of the services a food business would require, from idea to execution," says Sideya Sherman, NYCHA's executive vice president for Community Engagement and Partnerships.

"In an industry where the failure rate is high, it's imperative that support services like ours are in place to help entrepreneurs navigate NYC's culinary landscape," says Kobla Asmoah, Hot Bread Kitchen Incubates director. "Like many food entrepreneurs, Food Business Pathways graduates have the grit and hustle necessary to operate a food business. What we provide is a more formal framework for them to be successful."

Graduates learn not only how to read a balance sheet and create capital projections; they come away with a fully incorporated business. Related fees are paid for by the program, a significant savings; the costs of permits and licenses can be a prohibitive barrier for many low-income New Yorkers.

"A lot of our participants are accidental entrepreneurs, and we provide them with a way to structure, market and scale their concepts," says NYC Department of Small Business Services Commissioner Gregg Bishop. "We try to connect the dots so that we are not just to teaching them how to run an effective business, but connecting them with services that will help them."

FBP's nonprofit partners stay engaged with graduates long after the program is over. Alumni are invited to sell their products at Start Small Think Big's "Tasting Thursdays," a pop-up event series in Harlem, as well as letting them promote their businesses at its annual Pop-Up Party Fundraiser. Four graduates from each 10-week course compete for free kitchen space at Hot Bread Kitchen Incubates, a shared commercial area that includes support services to help entrepreneurs mitigate risk and grow their ventures among a community of business owners.

Not surprisingly, the program is quite popular. With only 35 students per course, the program typically receives nearly three times the number of applicants as it has vacancies. "Lots of our residents are home-based chefs who have been selling food for years and see the success of our graduates," says NYCHA's Sherman. "People know that it's a real opportunity, and they are eager to apply."

This year marks an exciting milestone for the FBP; its entry into New York's bustling food hall scene. The program has secured a stall at the new Brooklyn Navy Yard Food Manufacturing Hub, alongside the iconic NYC smoked fish house Russ & Daughters. "The food hall gives them the chance to test their product in a real-world setting, with lots of foot traffic and other exciting businesses that they can learn from," says Sherman.

Sherman says she hopes that other cities use this model to support low-income communities. NYCHA is already emulating it for a new program called Child Care Business Pathways. "We are riding on the wave of success of this one," says Sherman. "There is a serious talent pool within public housing. When you get them the resources, guidance and support they need, they are able to shine." 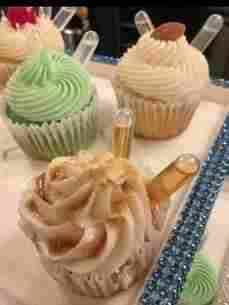 Joann Poe's Happy Spirit cupcakes are infused with two droppers full of alcohol (Hennessy, Patron, Amaretto) that you can either squeeze into the cupcake — or directly into your mouth. Joann Poe/NPR hide caption

With nearly 300 graduates over the past three years, the program has just launched an alumni group which offers bi-monthly meetups to share best practices, network and learn new skills. Sherman says this is critical to future entrepreneurs' success. "One challenge for low-income people in public housing is a lack of access to mentors," she says. "They don't know anyone who has started their own business. But now they do. Now they have someone to call and say, 'What do you do when you can't make payroll? What insurance do you use?'"

Nearly 90 percent of FBP graduates are women, a reflection of the female-heavy NYCHA population. Sherman says the program has the potential to impact future generations of women living in low-income housing. "We are helping low-income minority women realize their business dreams," she says. "That's great, not only for them but for their households, and for their daughters to see them succeed."

Leslie Mullen-Fields, who graduated in October, is starting her healthy gourmet business, MaahWaahs Catering, with her daughter Asantewaa Mullen. "I had nothing to leave my kids," she says. "Now I have a business that I can pass on."

Mullen-Fields says her experience in the program has been transformative. "How many 61-year-old women do you know starting their own business? I am still moving and going into unchartered waters at this age, and it feels really great. I was given the lift I needed to excel."

Poe, who has held onto her Verizon job, bakes at night and on weekends at Hot Bread Kitchen's 24-hour incubator kitchen. She also hopes the program helps tomorrow's entrepreneurs.

"My daughter sees what am I doing and she is proud of me," she says. "We can be role models and leaders for our family. It's hard where we come from. People are used to just getting a job and not thinking about owning a business. This program helps people aim higher."

Over the course of her career, Andrea Strong has been a lawyer, a restaurant manager, a waitress, a farm hand, a humanitarian activist, and for the last two decades, a journalist. Known for her pioneering food blog, The Strong Buzz, Andrea now covers the intersection of food, business, policy and the law. Read more about her at www.andreastrong.com, or follow her on Twitter: @strongbuzz.