Accessibility links
Happy Hanukkah. Love, Crisco : The Salt On Hanukkah, many Jews fry potato pancakes called latkes in oil or maybe schmaltz. But a century ago, one company saw an opportunity to make the Jewish fat of choice truly American: Crisco. 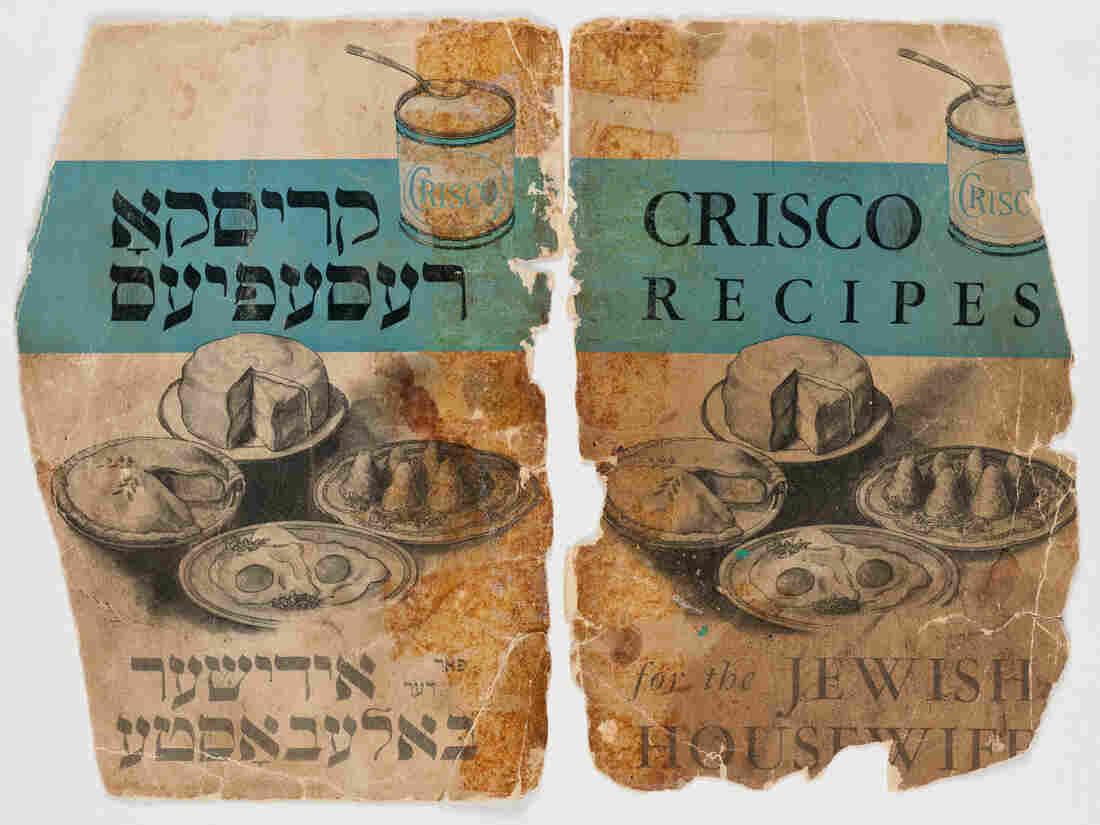 The cover of a 1933 cookbook, Crisco Recipes For The Jewish Housewife, produced by Crisco's parent company Procter & Gamble, to promote the vegetable-based oil to the new wave of Jewish immigrants. from The New York Public Library (public domain) hide caption 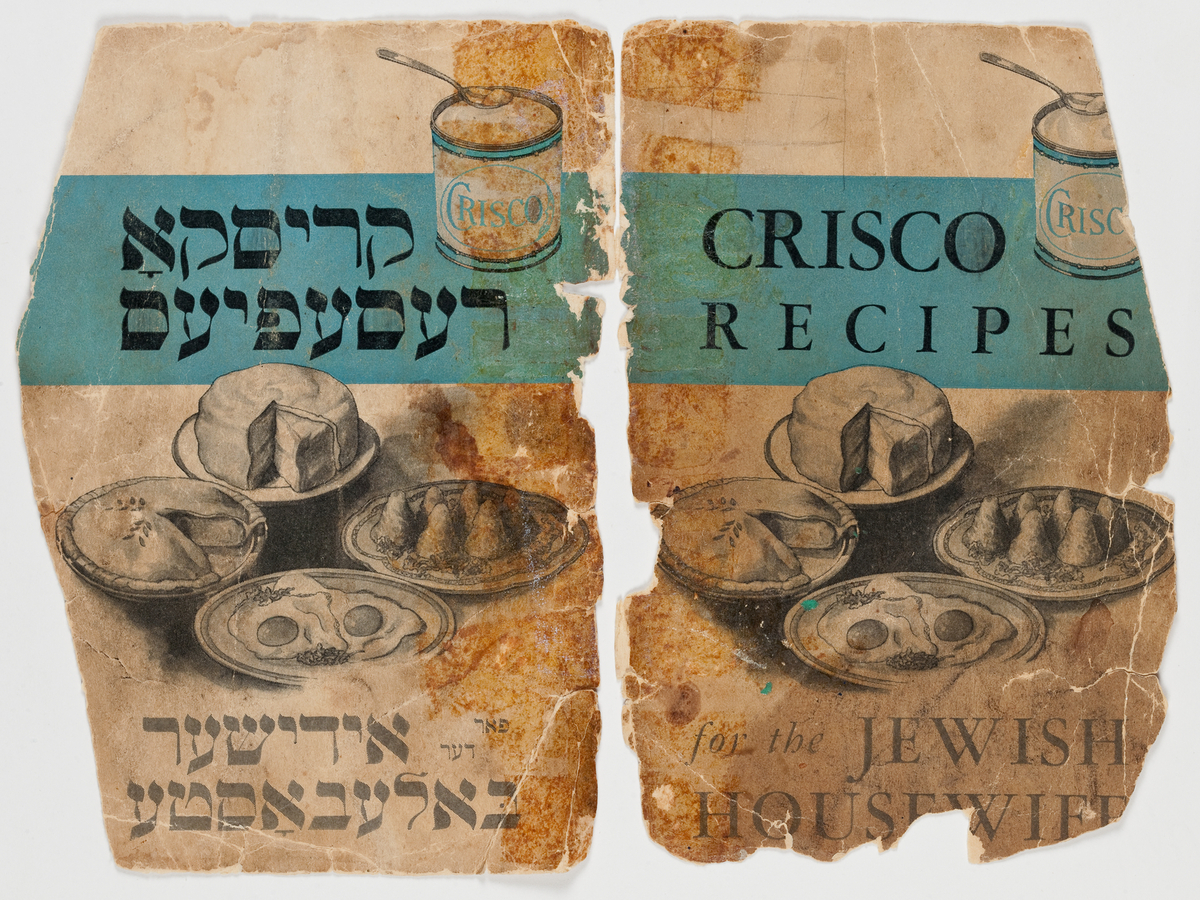 The cover of a 1933 cookbook, Crisco Recipes For The Jewish Housewife, produced by Crisco's parent company Procter & Gamble, to promote the vegetable-based oil to the new wave of Jewish immigrants.

Sunday is the first night of Hanukkah, and that means Jews around the country will be frying up potato latkes, celebrating the ancient miracle of the oil that burned for eight nights.

In a lot of ways, this deliciously greasy treat hasn't changed that much over time. Pull up a recipe from 80 years ago, and you'll find pretty much the same ingredients — grated potatoes with a sprinkling of flour or matzo meal, maybe some onions for flavor and eggs to bind, fried in fat until nicely browned. But there is one thing you may find in an early 20th-century cookbook that would surprise today's latke-makers: Crisco. Yes, that Crisco.

The Math And Science Of Latkes

To be clear, Crisco is not the fat of choice of the ancient Maccabees. And Eastern European Jews, who didn't have much access to oil, would have fried in schmaltz — rendered poultry fat (usually chicken, though goose was a holiday favorite if you had the means). But in the new world, that changed.

Kerri Steinberg wrote about the history of advertising and graphic design in her book Jewish Mad Men. And, she grew up with her mother's latkes fried in Crisco. Steinberg says the hydrogenated cottonseed oil in her mother's frypan was likely there thanks to Joseph Jacobs. He was an ad man who set up an agency on the Lower East Side nearly 100 years ago, which is still around today. 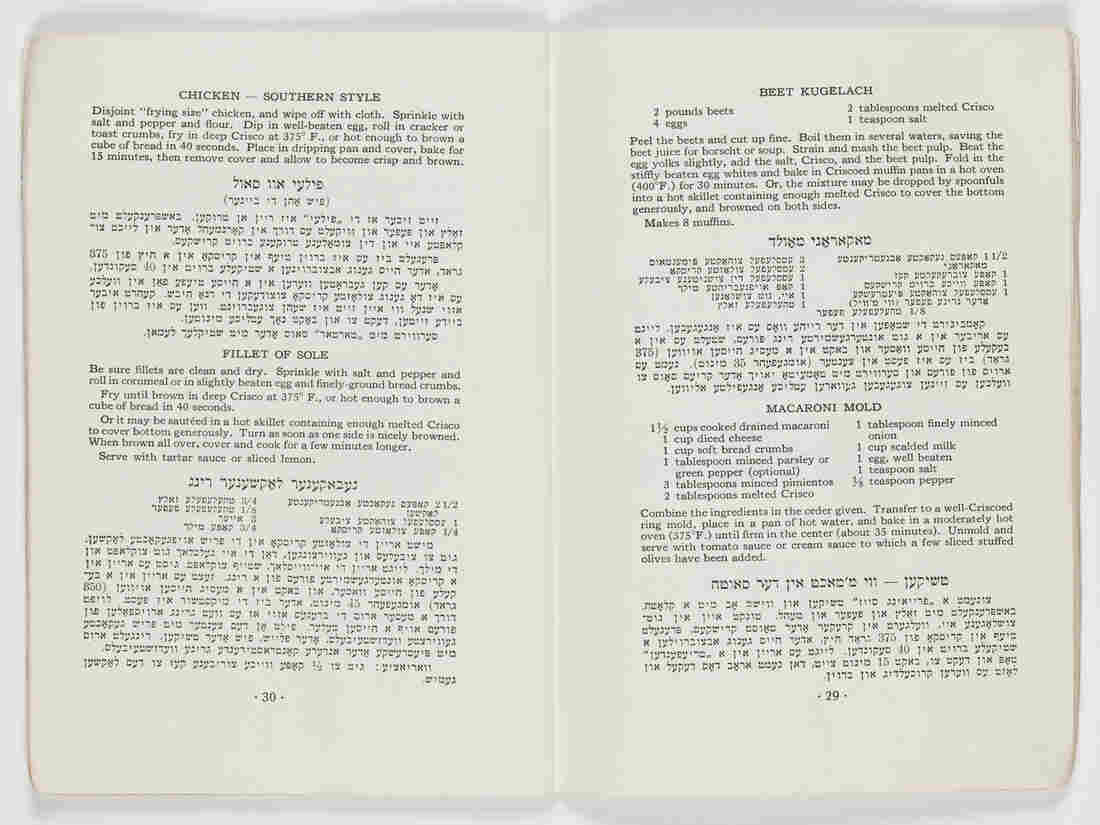 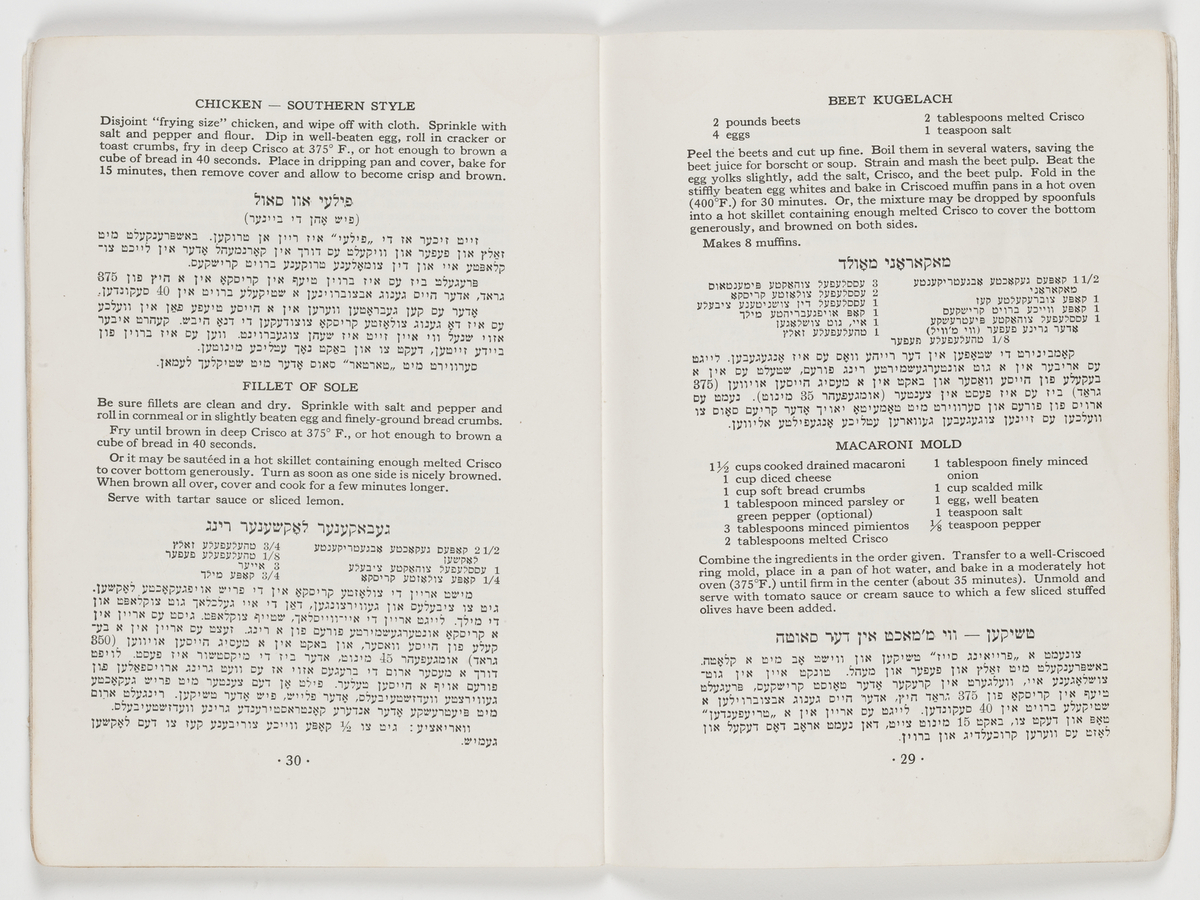 Recipes like Chicken - Southern Style and Macaroni Mold (a type of salad), from a 1933 cookbook by Crisco maker Procter & Gamble aimed at the "modern" American Jewish housewife.

"He specialized in mixed marriages," Steinberg jokes. "Which is to say that he introduced American mainstream manufacturers and products to the Jewish market."

With the wave of European Jewish immigration in the early 20th century, this was a sizable market, and companies from Procter & Gamble (P&G) to General Foods hired Jacobs to learn about these potential customers. And these interest went in both directions, as new immigrants were eager to Americanize.

One of Jacobs' greatest successes with the market of Americanizing Jews was the Maxwell House Haggadah, creating a standardized holiday text as a way to ensure religious Jews continued to drink coffee during Passover.

And because of the dietary restrictions of keeping kosher, which call for the separation of meat and dairy, Jacobs realized that Jews were a natural market for a pareve (neither milk nor meat) vegetable-based product like Crisco. And in 1933 he appealed directly to the Jewish-American identity, religious dietary restrictions, and interest in the latest "clean" and healthy food science by developing a cookbook called Crisco Recipes for the Jewish Housewife. In both Yiddish and English, it showed newly American households how to use Crisco in everything from poppyseed cookies to stuffed cabbage to Chicken - Southern Style. And of course, fried potato latkes.

It was a perfect entree into the Jewish American home of the time, which often included multiple generations. "The Yiddish-speaking mother, presumably, is going to bring a knowledge and a familiarity with traditional Ashkenazi baked goods. And the English-speaking daughter is presumably, Procter & Gamble hopes, going to bring a willingness to use modern products like Crisco," says Gross.

Crisco even made a radio advertisement targeting the Jewish market, which originally aired during the radio program "Hebrew Songs of Palestine." The tape is courtesy of the Max and Frieda Weinstein Archive at the YIVO Institute for Jewish Research:

And so Crisco, at least for a time, became part of Hanukkah.

With the growing availability of various vegetable oils and rising concerns about trans fats, Crisco gradually fell from favor in the Jewish kitchen. These days, instead of reaching for their grandparents' Crisco, latke-fryers may be more likely to experiment with schmaltz — reaching back to the flavors of their grandparents' grandparents.

Hanukkah History: Those Chocolate Coins Were Once Real Tips

Professor Rachel Gross says when holidays come around, we think about family, and what it means to be part of a particular story. And if those stories are shaped by food, and immigration, and even product placement, that's okay. It's what Hanukkah is, says Gross — "Not some biblical story, or the rabbinic stories that come later about miracles and oil. But getting together and eating latkes with your family or with your friends."

And that can make for a meaningful holiday no matter what type of fat happens to be in the frypan.