Accessibility links
U.S. Offered Chicken To Address Soviet Food Shortages In The 1990s : The Salt The first Bush administration left the former Soviet Union with a taste for dark meat American chicken. It's all because of a Soviet food shortage, a U.S. surplus, and a deal with President Gorbachev.

3:53
Chicken Diplomacy: How President Bush Went For The Gut In The Former USSR 3:53 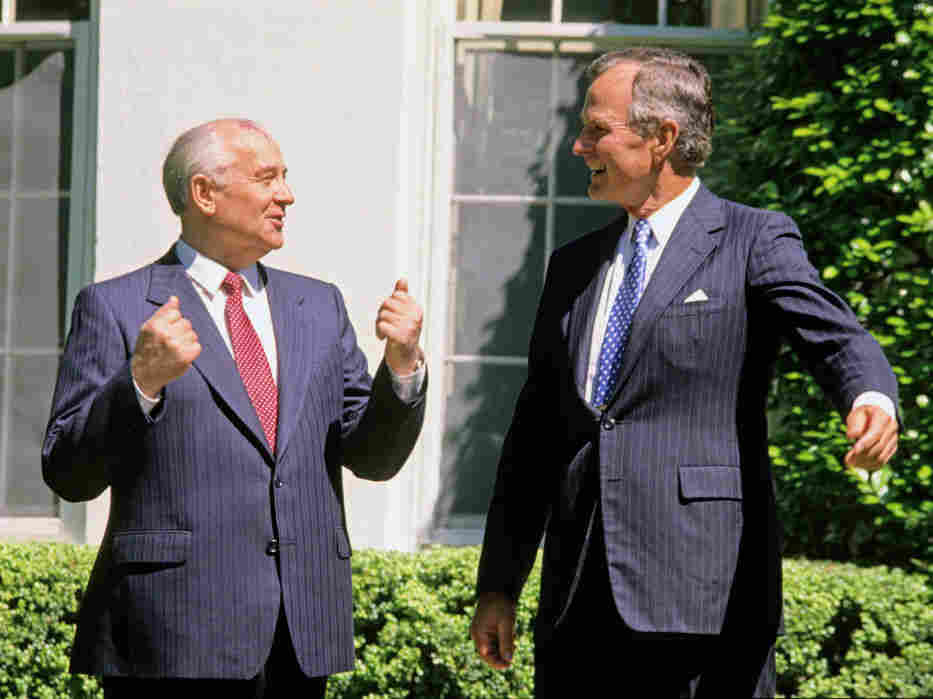 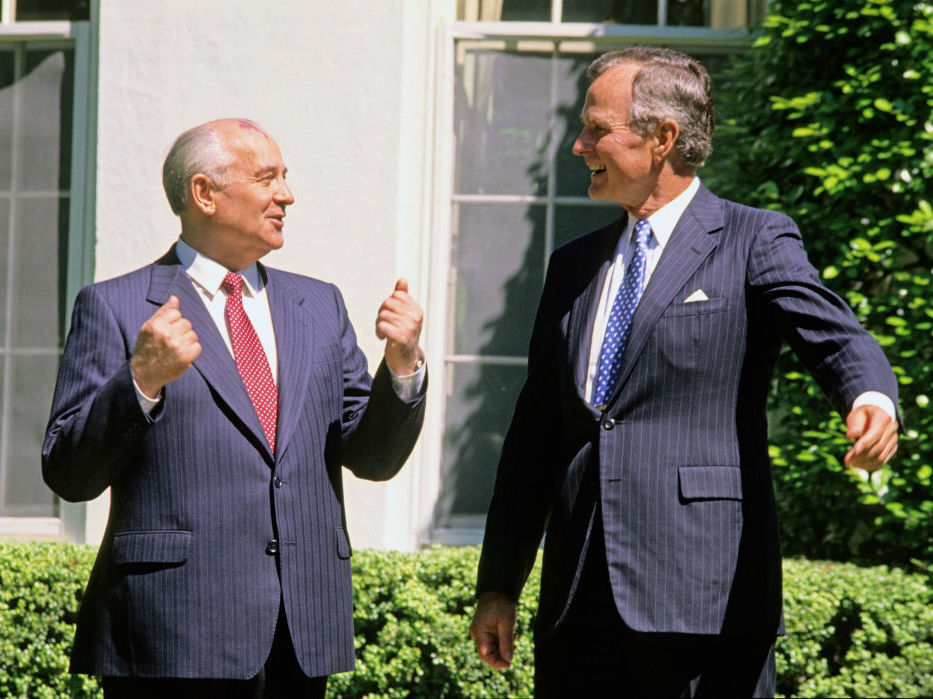 Soviet President Mikhail Gorbachev (left) and former U.S. President George H.W. Bush share a light moment together outside the White House in 1990. Could they be discussing chicken?

As we've been hearing this week, people have very different memories of the late President George H. W. Bush. Some see him representing a civility that has disappeared from American politics. For others, he's the symbol of indifference to the suffering of many Americans during the AIDS epidemic. But ask someone from the former Soviet Union about Bush, and they're likely to think of... his legs.

Some context: As the Soviet Union began to unravel in the late 1980s, the food supply chain broke down. It's a picture a lot of people remember.

"You'd have people standing in lines to get especially scarce things, like vodka. But increasingly also cheese, bread, milk," says Yanni Kotsonis, a historian of Russia and its economic history at New York University.

To deal with these shortages, the Soviet Union made a series of trade deals.

"There might be a deal with some enterprise in Eastern or Western Europe, and suddenly there's a flood of that particular good," Kotsonis explains. "It could be ballpoint pens. It could be cologne. It could be Bulgarian kompot, which is preserved fruit in a jar. It could be canned fish from Greece." And the Soviet people would line up for it, whatever it was.

And in 1990, the U.S. made a deal to send over surplus chicken — which, given the U.S. preference for chicken breasts (then and now), meant dark meat. And so, Kotsonis explains, the market was flooded with these large chicken leg/thigh combinations.

Come To The Dark Side Of The Chicken; It's Tastier

"It was announced as a deal between the United States, led by President Bush, and Mikhail Gorbachev of the Soviet Union. And the nickname immediately caught on that these are Bush's legs, or Bush's feet."

And these Bush legs, known as nozhky boosha, made a big impression on the Soviet market.

"Each Bush leg was the size of a Soviet chicken," recalls Anya Ulinich, laughing. She is a writer in Brooklyn now, but in 1990 she was a teenager in Moscow. "Or at least it seemed sort of that way. It was like an elephant next to a Chihuahua."

While these days consumers may pay top dollar for a small, flavorful heritage breed, back then, the Soviet chicken stock was not a source of pride, Ulinich explains. "All these jokes were always made about the Soviet chicken — that it ran a marathon, or several. Or it got an award for being the longest-lived chicken. They were kind of scrawny and blue and dark."

Sasha Senderovich, who teaches Russian and Jewish studies at the University of Washington, remembers that the Soviet bird's shortcomings didn't end there.

This Soviet-Era Cookie Is Filled With Sweetness Amid Scarcity

"If you were able to procure that scrawny Soviet chicken, you would have to bring it home, and kind of continue to kind of deal with it, because it wasn't fully plucked," Senderovich explains. "There would still be some feathers on, and you would pluck those that were still there. Then you would have to singe them inside the apartment, on your gas burner, so it would stink up the whole house," he recalls with a shudder.

By contrast, Bush legs were enormous, white, and fully processed. And, they were available. Historian Yanni Kotsonis says that in the 1990s, about 70 percent of Russian chicken was imported. At times, Russia bought up to 40 percent of U.S. chicken exports.

"Sure it was motivated by Bush's good connections with the poultry industry. But it also represented a very real form of diplomacy. And I lament the loss of that kind of diplomacy."

But Kotsonis acknowledges that around the same time Russians were embracing the soft diplomacy of delicious Bush legs, they were also watching the brutal bombings of the first Gulf War. And thinking about their own dependence on the country behind it. For a lot of Russians who lived through this period, feelings toward America can be somewhat conflicted.

Sasha Senderovich fondly remembers the Bush legs coming out of his grandmother's oven. And yet, he says the Bush legs "were the sort of first foot soldiers of American capitalism you sent eastwards, to lay the groundwork for all the rest that followed," he laughs ruefully.

With perestroika came not only surplus American dark meat, but a loosening of political humor. Senderovich recalls the most popular joke:

Like a lot of Russian humor, this one is hard to parse. Is the joke on the scrawny Soviet bird who thinks he's noble? Or on the capitalist American bird who isn't? Or on the Soviet consumer stuck between these two?

Either way, it's a thing of the past. Import sanctions over the last decade took Bush legs off the Russian menu, and the domestic industry rebuilt to fill the void. But for millions of former Soviets, the deliciously complicated memory remains.