Accessibility links
As Climate Changes, Is Eating Raw Oysters Getting Riskier? : The Salt Tighter regulations on oyster harvesting have helped reduce the number of people affected by the deadly bacteria Vibrio vulnificus, but warming waters have allowed the bacteria to expand and thrive. 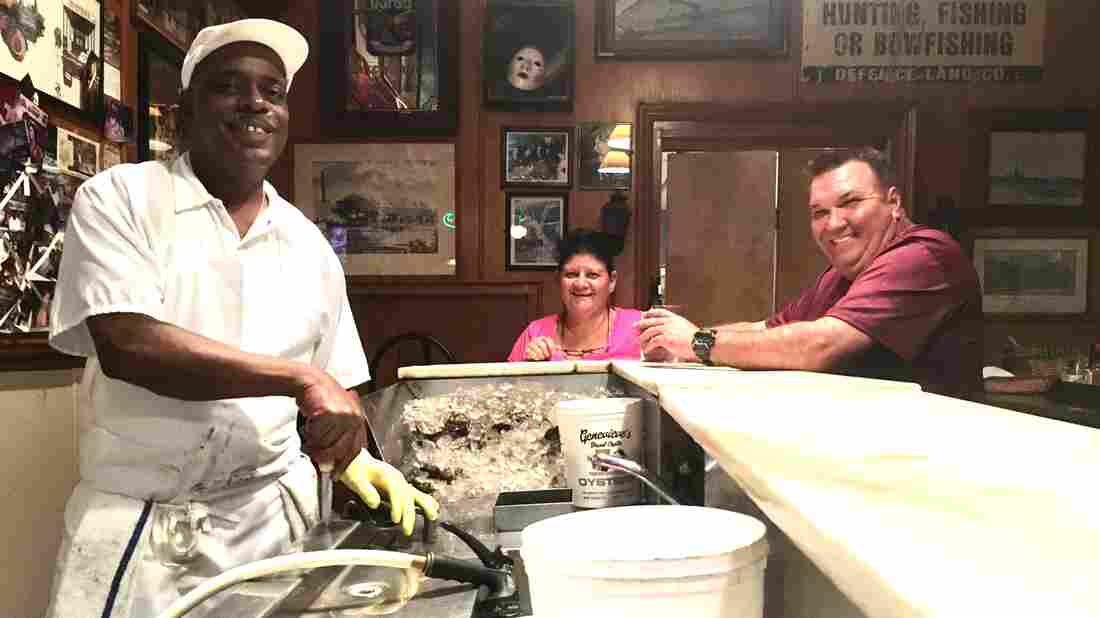 Thomas "Uptown T" Stewart (left), has been shucking oysters at Pascal's Manale restaurant for more than 30 years, about as long as Paula (middle) and Brent Coussou have been going there. Travis Lux/WWNO hide caption 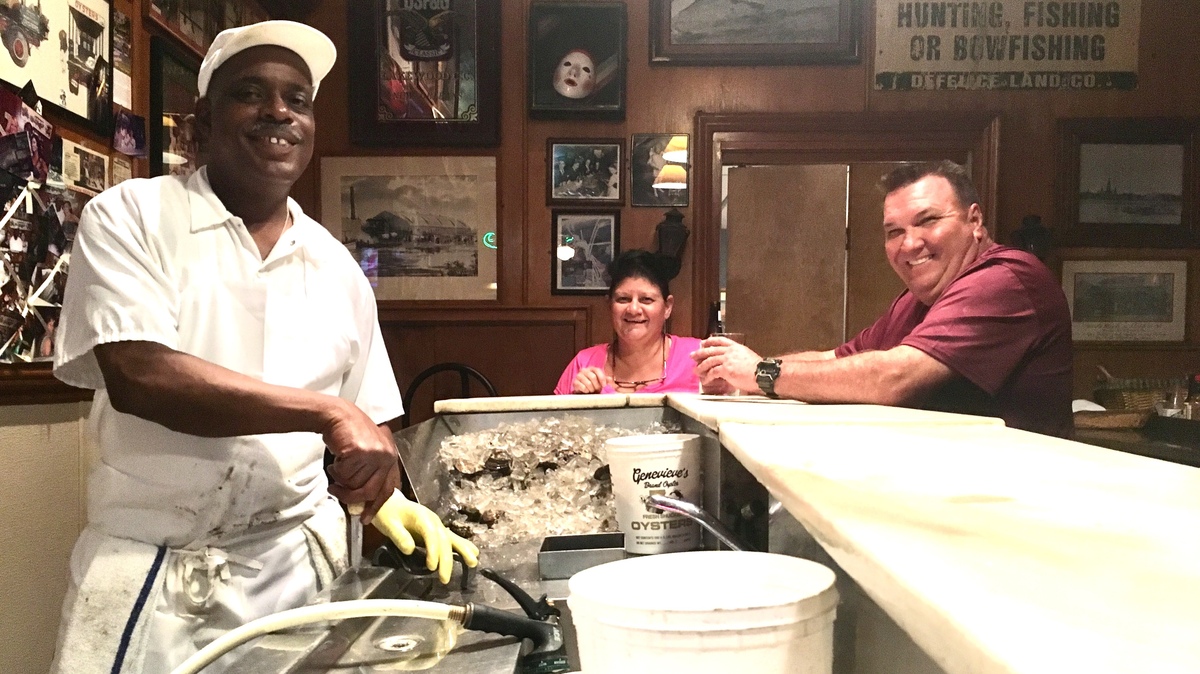 Thomas "Uptown T" Stewart (left), has been shucking oysters at Pascal's Manale restaurant for more than 30 years, about as long as Paula (middle) and Brent Coussou have been going there.

The place where Kelsch ate oysters has not been publicly released.

Oysters have long been a trademark of southern cuisine, but they also pose health risks for some.

Lopez says the biggest danger comes from a pervasive bacteria called Vibrio vulnificus, which is what reportedly killed Kelsch.

Vibrio vulnificus naturally thrives in brackish waters where the temperature is above 68 degrees Fahrenheit. As a result, it's actually more common in the Gulf of Mexico, where the waters are warmer, than on the East and West coasts.

"If you're consuming a raw oyster that comes from the Gulf Coast waters ... particularly in the summer months," says Lopez, "You have to assume that it has Vibrio vulnificus."

Thomas "Uptown T" Stewart is the famous oyster shucker at the New Orleans restaurant Pascal's Manale. Stewart has worked at the restaurant for more than 30 years, and he knows his clients well. It seems like he's always shouting "What's happening, y'all?" to people walking through the front door.

Stewart's side of the bar is covered by a pile of raw oysters and ice. One by one he digs them out, pries open the shells with a knife and frees the meat with effortless speed.

Brent and Paula Coussou are on the other side of the bar. They're each nursing a beer, and there's a row of empty oysters between them. They say they've been coming to the restaurant for as long as Stewart has been working there.

"This guy here's the best. The best," says Brent Coussou." I mean, I've been to a lot of places and it's just, his oysters are very clean. He doesn't have any chiplies in his oysters."

That may not be an official term, but he's referring to those crunchy bits of shell that sometimes get slurped down with the raw oyster.

Coussou heard the news about the politician who died, but he's not worried. He says he's never gotten sick.

Although many oysters are exposed to Vibrio vulnificus, they aren't dangerous to everyone. People with specific pre-existing health problems are most vulnerable.

"They can eat shellfish," he says. "They just need to make sure that they're thoroughly cooked — boiled, fried, steamed, etc."

But when people with weakened immune systems are infected by Vibrio vulnificus, anywhere from one-third to one-half of those people die.

That's why there are very strict regulations around oyster harvesting. The Interstate Shellfish Sanitation Conference (ISSC) sets those regulations for the Food and Drug Administration.

"Probably, shellfish and milk are the two most regulated foods in the country," says Ken Moore, Executive Director of the ISSC.

There's an old adage, that you should only eat raw oysters in months with an "R." September through April — basically the cooler months. So this isn't a new idea.

Moore says regulations have tightened over the last 10 years or so. For example, during the warm summer months, oysters that are meant to be eaten raw must be refrigerated within an hour of harvesting. He says it's had a positive effect.

"We've actually seen a reduction in [raw oyster Vibrio vulnificus] cases," Moore says. "We think that the controls that we have in place are actually keeping those numbers low."

"It is very, very rare to become ill from eating oysters," says Billioux.

On East Coast Oyster Farms, 'Women Are Rising Up From The Bay In A Big Way'

And though infections from raw oysters are down, Billioux says the amount of Vibrio vulnificus in the water is actually increasing due to warming waters.

"I definitely expect our jobs to become harder as the waters continue to warm because of climate change," he says.

That could mean more testing, scrutiny, and risk in the future.

"I think that's sort of the big point when we start talking about the climate change effects," Billioux says. "It really can touch everything."

This story comes to us from member station WWNO in New Orleans. Support for the Coastal Desk comes from the Walton Family Foundation, the Greater New Orleans Foundation, the Foundation for Louisiana and local listeners. You can listen to the audio here.