Accessibility links
Lots Of Antibiotics Are Used In Beef Production. McDonald's Vows To Change This : The Salt The fast-food giant, one of the world's biggest beef buyers, announces plans to use its might to cut back on antibiotics in its global beef supply. Environmentalists are applauding the commitment.

Lots Of Antibiotics Are Used In Beef Production. McDonald's Vows To Change This

Lots Of Antibiotics Are Used In Beef Production. McDonald's Vows To Change This 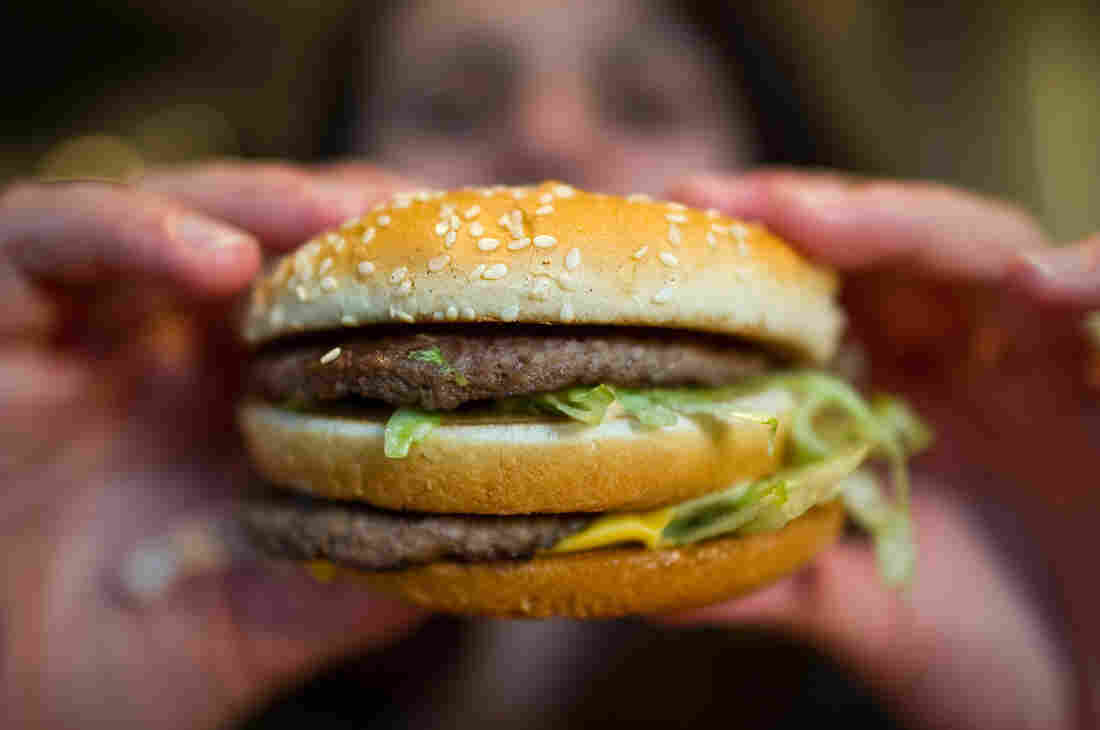 A customer holds a McDonald's Big Mac. The fast-food giant, one of the world's biggest beef buyers, has announced plans to use its might to cut back on antibiotics in its global beef supply. Environmentalists are applauding the commitment. Christoph Schmidt/Picture Alliance via Getty Images hide caption 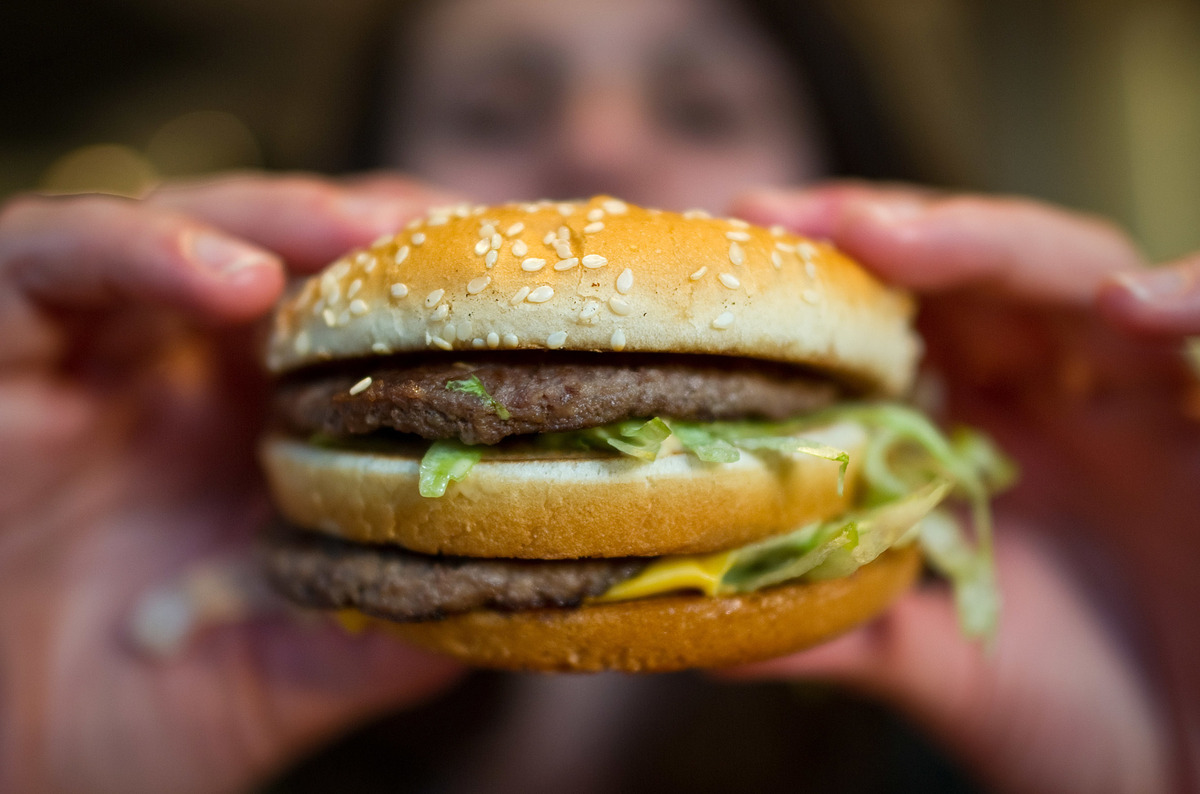 A customer holds a McDonald's Big Mac. The fast-food giant, one of the world's biggest beef buyers, has announced plans to use its might to cut back on antibiotics in its global beef supply. Environmentalists are applauding the commitment.

Antibiotic resistance poses a threat to global health and food security. And McDonald's — one of the globe's largest purchasers of beef — gets it: The more that antibiotics are given to livestock, the more quickly bacteria could adapt and become resistant to them. Ultimately, experts say this could render the drugs ineffective for people.

When it comes to reducing the use of antibiotics in livestock, there's been a lot of progress in the poultry industry. Back in 2015, McDonald's announced a plan to prohibit its chicken suppliers from using antibiotics that are important to treating human health. Many other food chains did the same.

Now, McDonald's says it will use its massive scale to reduce the use of antibiotics in cows that are part of its global beef supply. "I personally think this is probably the most ambitious project that McDonald's has ever taken on," says Bruce Feinberg, a senior director at McDonald's Corp., who oversees global quality systems for protein and dairy products. The company will measure antibiotic use in its top 10 beef markets, including the U.S., Brazil and New Zealand — and then will set targets for reduction by the end of 2020.

Environmentalists are applauding the commitment. "McDonald's is the first major burger chain to announce a comprehensive antibiotic use reduction policy for all beef sold by its restaurants — and the largest, by far," Lena Brook, interim director of food and agriculture at the Natural Resources Defense Council, writes in a statement. The NRDC says at a time when about 40 percent of medically important antibiotics sold in the livestock sector in the U.S. go to the beef industry, compared to just 6 percent for chicken, "addressing overuse in beef production is critical to combat drug resistance."

The new commitment from McDonald's comes at a time when advocates have turned up the volume on their criticism. U.S. PIRG Education Fund, a consumer advocacy group, and more than 80 other stakeholder groups have called on the chain to cut routine antibiotic use. In May, some of these groups delivered a petition to McDonald's during its shareholder meeting with more than 150,000 signatures.

"The Golden Arches just raised the bar for responsible antibiotic use in meat production. We can't afford to misuse these precious medicines," writes Matthew Wellington, antibiotics program director for U.S. PIRG Education Fund, in a release.

Given the poultry industry's swift action to reduce antibiotic use, why has it taken so much longer to push for reductions in beef? McDonald's Feinberg says it's been tricky to determine which antibiotics — and how much -- are used in beef production. "We've found out that there's not a whole lot of information available globally," Feinberg says. Some countries do track antibiotic use, but — for instance — in the U.S., the Food and Drug Administration data estimates usage by tracking pharmaceutical sales.

"The beef supply chain is quite fragmented and complex," says Karin Hoelzer of The Pew Charitable Trusts, whose research focuses on antibiotic use in animals and other public health risks related to the food supply.

With chicken, it's common for "the same entity [to] handle everything from hatching to slaughter," Hoelzer says. And chickens are typically hatched and slaughtered within 50 days. But with cattle, she says, "there are many different entities involved in beef production, over a longer period of time."

For instance, cows are often transported from a ranch to a feedlot. "So you load them in a truck and ship them for many miles to a feed lot," explains Lance Price, a professor at George Washington University's Milken Institute School of Public Health and the founding director of the Antibiotic Resistance Action Center.

Price says that during this transportation process, the cows can become vulnerable to what's known in the industry as shipping fever, "so that's one of the justifications for using antibiotics. Another example: "You switch [the cows' diets] from grass to corn and soybeans, which is not what they evolved to eat and they start getting liver abscesses," Price explains. So, this is another justification to "treat them with lots of antibiotics once they're on the feedlot."

GW's Price applauds McDonald's approach. "I think it's a big step," Price says. According to the Centers for Disease Control and Prevention in the U.S., at least 2 million people get an antibiotic-resistant infection each year, and at least 23,000 people die.

"In the midst of the crisis that we're in, in terms of antibiotic resistance, I haven't seen our policymakers running towards the common goal of protecting antibiotics," Price says. When it comes to addressing the role that animals raised for food can play, "I think what we're seeing is the marketplace being more protective than the government."

Hoelzer says she'd like to see industrywide standards for reducing antibiotic use in beef, but "given the scale and pace of change in the food sector, we think McDonald's has done a commendable job tackling these important issues head on."