Accessibility links
The Bitter Boom-And-Bust Tale Of Colorado's Bet On Local Beer Hops : The Salt Even with the backing of state-based beer giant Coors, small farmers just couldn't compete with the Pacific Northwest. And with more people choosing wine and spirits, some craft brewers are closing. 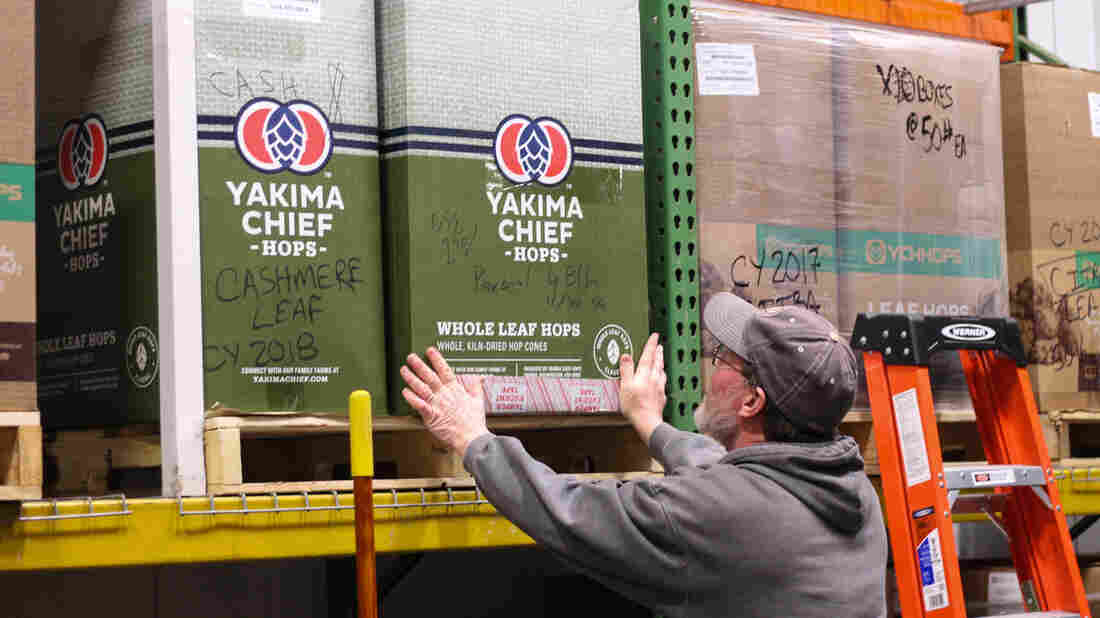 At Odell Brewing Company in Fort Collins, Colo., Scott Dorsch pulls down a box of hops from the Yakima Valley in Washington, the state that grows the most hops in the nation. "We would buy more hops than what Colorado could produce," he says. Esther Honig/Harvest Public Media hide caption 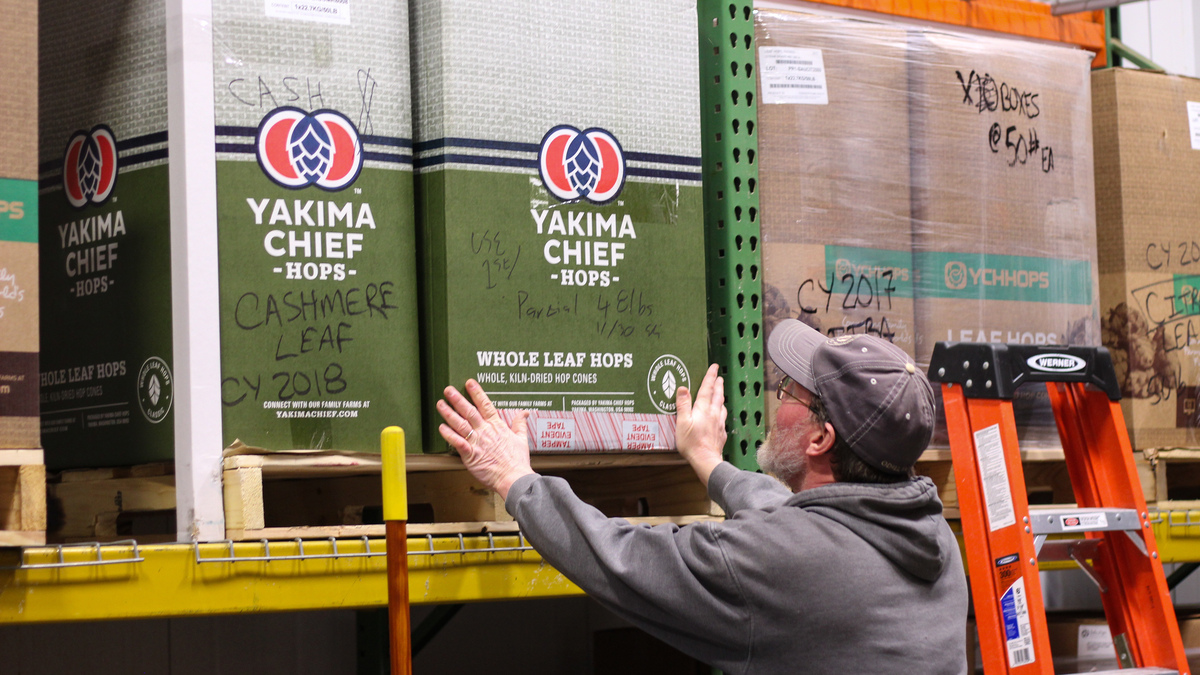 At Odell Brewing Company in Fort Collins, Colo., Scott Dorsch pulls down a box of hops from the Yakima Valley in Washington, the state that grows the most hops in the nation. "We would buy more hops than what Colorado could produce," he says.

Back in 2010, there were high hopes in Colorado that locally grown hops, the plant that gives beer a bitter or citrusy flavor, would help feed the then-booming craft beer market. In just six years, the industry had sprouted from almost nothing to 200 acres, according to the trade association Hop Growers of America.

Inside the chilled storage room at the 22nd largest craft brewery in the country — Odell Brewing Company in Fort Collins, Colo. — brewer and agronomist Scott Dorsch pulls down a large box with the words "whole leaf hops" printed on the front. He rips open the silver packaging to reveal a mound of flattened, dried green hops, crisp and airy like dried leaves.

Of the estimated $25,000 worth of hops in the room, none are from Colorado. That's because a large company like Odell requires a more reliable source. Farmers in Washington have been growing hops for decades, sometimes over several generations. Dorsch knows the hops he buys from them have the consistent flavor he needs to produce Odell's signature beers, and supply isn't a concern. When Odell has bought local hops in the past, it's only to make a seasonal, limited-distribution beer.

"We would buy more hops than what Colorado could produce," he says.

Hops may not have panned out to be the major crop that some Colorado farmers had bet on. And Dorsch says the green rush all began with one well-known company.

"If it hadn't been for Coors, I don't think there would have been 200 acres of hops growing in Colorado," he says. "I think that people would have given up a long time ago."

With the largest single brewery facility in the world, the Coors Brewing Company operates out of Golden, Colo. A company they own, called AC Golden, wanted to jump-start the local hop industry for its beer, "Colorado Native," which uses only local ingredients.

AC Golden officials says that starting in 2010, they paid farmers a premium price for their crop in an effort to help get them established. Farmers reported being paid up to $15 a pound, far above the going market price at the time of around $4.

There's a high start-up cost to growing hops. The vines require trellises, which can cost anywhere from $10,000 to $20,000 per acre to install.

Ron Yovich was one of about a dozen farmers growing hops for Coors. Like most, he was a small first-time farmer, and that premium price allowed him to purchase expensive harvesting equipment from Europe.

"At that point, [Coors] had a significant role in basically keeping us afloat for the first few years," he says.

The premium price allowed Yovich, as well as other farmers interviewed for this story, to make a return on the investments. But it wouldn't last.

In 2016, it started slowing down as wine and spirits grabbed a larger share of the market, according to Bart Watson, an economist with the Brewers Association, a national trade association. He says that while the craft beer market is still growing, it's just less so because consumers have far more options. Last year, 165 craft brewers closed down.

"There's a lot of competitiveness out there," he says.

This, he says, is partly why the hop industry in Colorado still hasn't reached the scale that Coors and some farmers had bet on.

"We may see the hop industry scale back in places like Colorado simply because they were building for a future that was bigger than what we've actually seen," he says.

The Pacific Northwest is the nation's major supplier of hops, especially Washington's Yakima Valley, which produces more than 39,000 aces, or 71 percent of the nation's hops. Idaho and Oregon are the next largest, and together three these states have pushed the U.S. to its biggest-ever hop harvest, breaking the 100 million-pound mark for the first time in history.

Colorado's crop acreage is 7th in the country, and hasn't grown since 2016. And small hop industries in Indiana, Illinois, Nebraska and Iowa have seen little to no growth in the past few years. Only Michigan and New York have remained competitive at a time when experts say the specialty hops market is saturated.

Finding a new market ... or crop

Demand for local hops may lie with microbreweries, which are still doing well despite the outlook for the rest of the craft beer market. 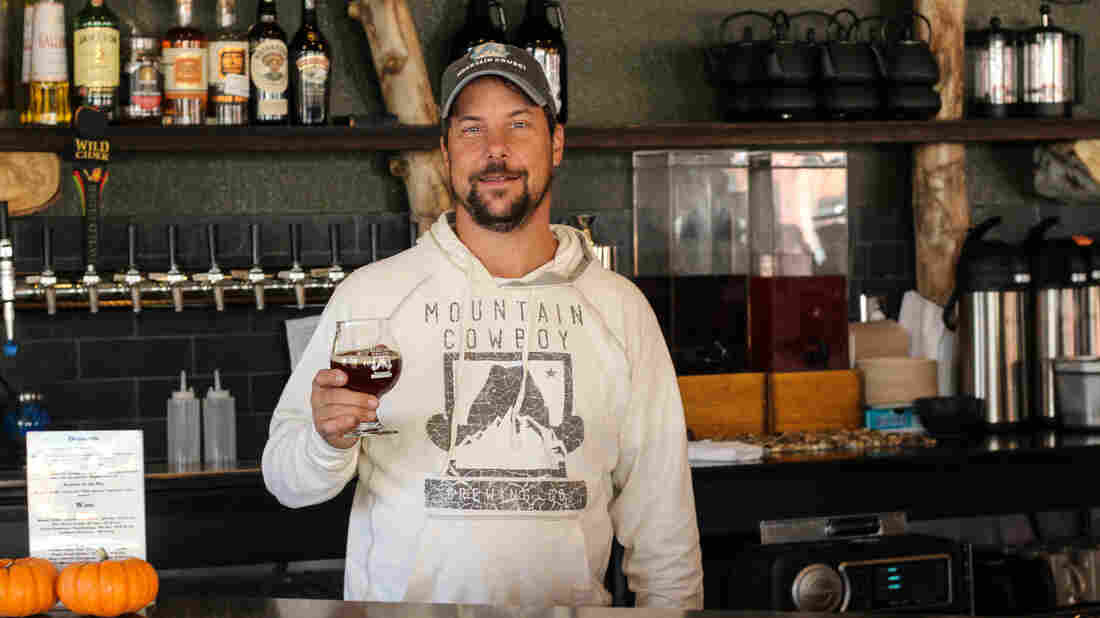 Ron Yovich opened a microbrewery in Frederick, Colo., where he uses the hops he grows to make his beer. Esther Honig/Harvest Public Media hide caption 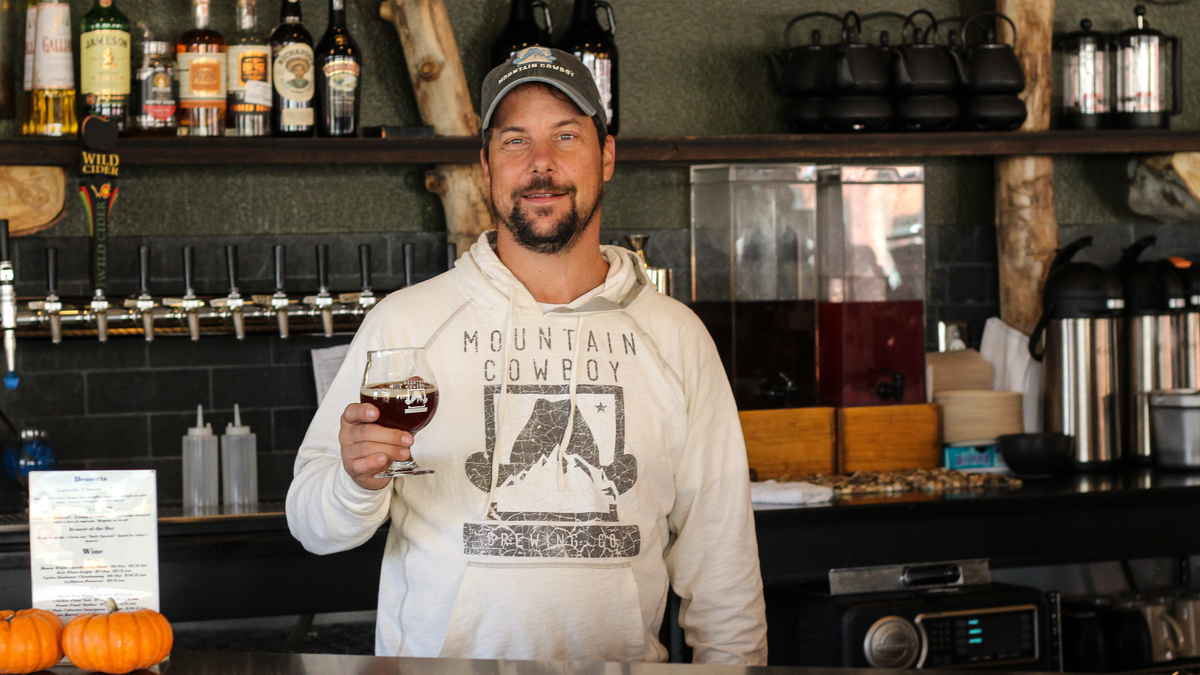 Ron Yovich opened a microbrewery in Frederick, Colo., where he uses the hops he grows to make his beer.

That's where Yovich has placed his bets. He no longer grows for Coors, nor does he have to worry about finding a reliable buyer. Instead, he and his wife opened Mountain Cowboy Brewing Company in Frederick, Colo., and most of his crop is used to make his beer.

"You know the old adage, 'don't put all your eggs in one basket'? That's the way it is," he says.

Other hop farmers have left the industry altogether. Mark Riley owns several acres and grew for Coors starting in 2012, but says this year the company lowered its price to about $5.50 a pound. He said he could have kept things going, but the drop in price — along with the cost of labor and arrival of powdery mildew on his plants — told him it was time to throw in the towel.

"You know when you tell people, 'Oh, you've lost your price.' They're like, 'Oh, that huge corporation, screwing the little guy,' and that's not how it was," he says.

He said Coors communicated from the beginning that the high prices wouldn't last. The idea was that growers would eventually find more buyers elsewhere.

Riley recalled one year when he approached more than 100 local brewers to buy his hops, but managed to sell only a fraction at a reduced price. "We thought a lot more might be interested in a Colorado product," he says. When it came to marketing, "We don't have that skill set," he adds.

For their part, AC Golden officials said they had to strike a balance between supporting farmers and being financially solvent. By their estimates, they overpaid farmers by about $3 million over the course of eight years, which they consider an investment in local industry.

Other farmers who were interviewed are still growing and selling to Coors.

Riley has ripped up his hop plants and moved on to something else that many farmers are hoping will become the next big crop in Colorado — and maybe across the United States: industrial hemp.