Accessibility links
Let's Gather In The Kitchen, Where The Guests Are : The Salt Holiday season is party season. Hosts decorate their homes with trees, flowers and candles in the windows to make them cozy and festive. Yet so many parties end up in the kitchen. Why? 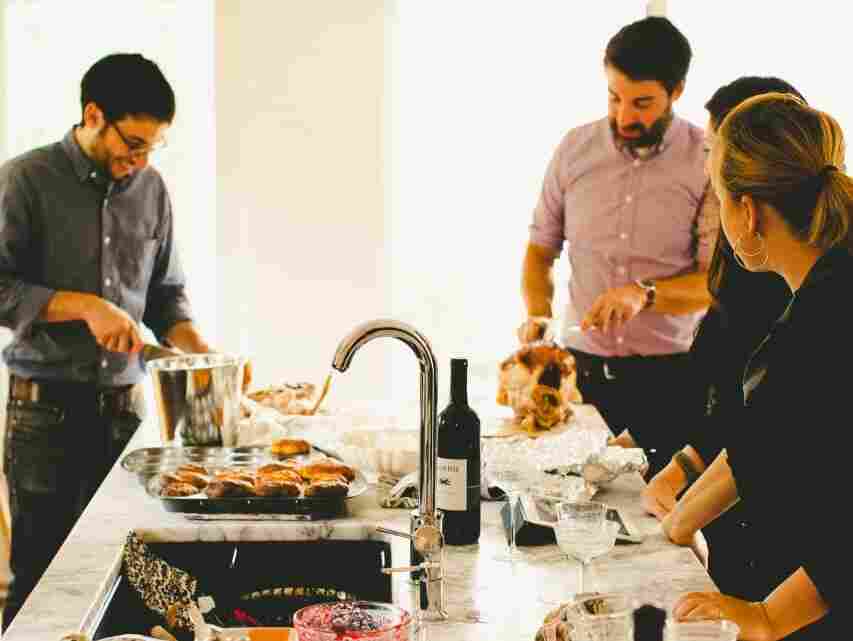 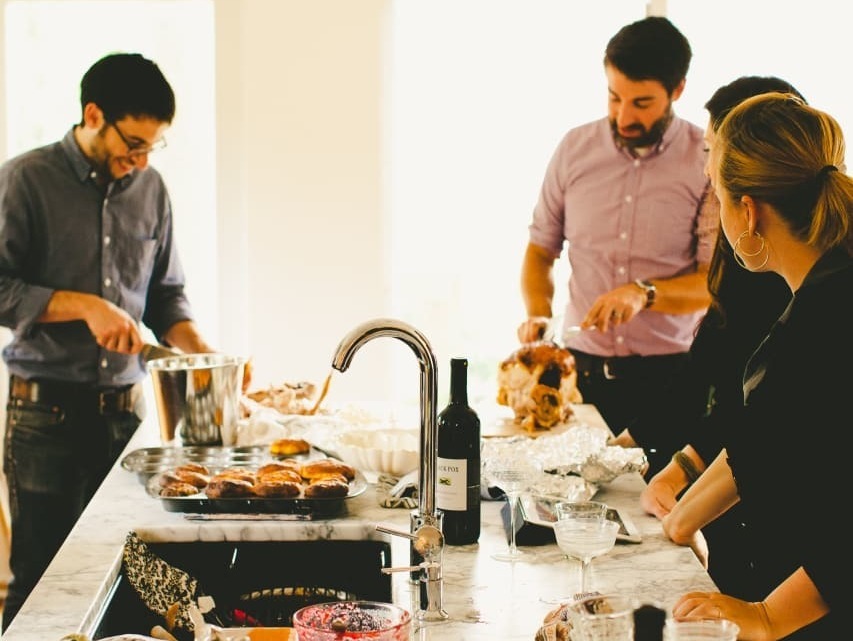 Michael Durand (left), husband of Kitchn Editor-In-Chief Faith Durand, and friend Chris Gardner (right) carve turkey while guests hang out in the Durands' kitchen, dirty dishes and all, at a recent party.

In Portland, Ore., Patrick Donaldson's Christmas party is swinging. Although the living room is filled with lights, flowers, champagne and bacon-wrapped appetizers, people keep leaving the comfy couches and drifting back to the kitchen. And it's not a big kitchen.

"It's about 10-by-12, I would say — small," Donaldson acknowledges of the cooking space in his 1949 duplex. "Sometimes, I've been at parties where the kitchen is even smaller than this, and everybody is pinned in there."

It's a bit of a cliché, but the kitchen can really feel like the heart of things. As an architect, Donaldson sees this on a daily basis.

"Every time we do a remodel for somebody and we touch the kitchen, we are opening up the wall and connecting the kitchen to the living space," Donaldson notes. "The kitchen being the center of the activity, that's where everybody wants to be."

Donaldson even cut some squares into the wall separating his tiny kitchen from the living room, so guests can still see the party lights as they come in throughout the night. And they do — to grab a bite of the ham he's carving, to chat with the hosts, to chat with the guests who are chatting with the hosts or to drop off drinks in the refrigerator or napkins in the trash.

Faith Durand is editor-in-chief of Kitchn, a website focusing on home cooking, kitchen design and gatherings. And for as many articles she publishes on perfect appetizers and tablescapes, Durand knows that the messy informality of the kitchen has its own draw.

"That polish and that social media beauty that we do want to create in our home sometimes can have this weirdly cold effect for our guests," Durand acknowledges. "I think people want to be where there's warmth."

And the kitchen is most definitely warm — both literally and metaphorically.

"In the kitchen, you can relax," Durand says. "You can bump up against a counter, not worry about putting that glass of wine down. There might already be some mess."

But this warm, welcoming kitchen environment is not what you would find 150 years ago. Elizabeth Cromley, an architectural historian, looked at the intersection of food, eating and architecture in her book The Food Axis. Back then, Cromley notes, "The kitchen would be this very separated place, and nobody else would want to go in the kitchen because you don't mix socially with your servants." 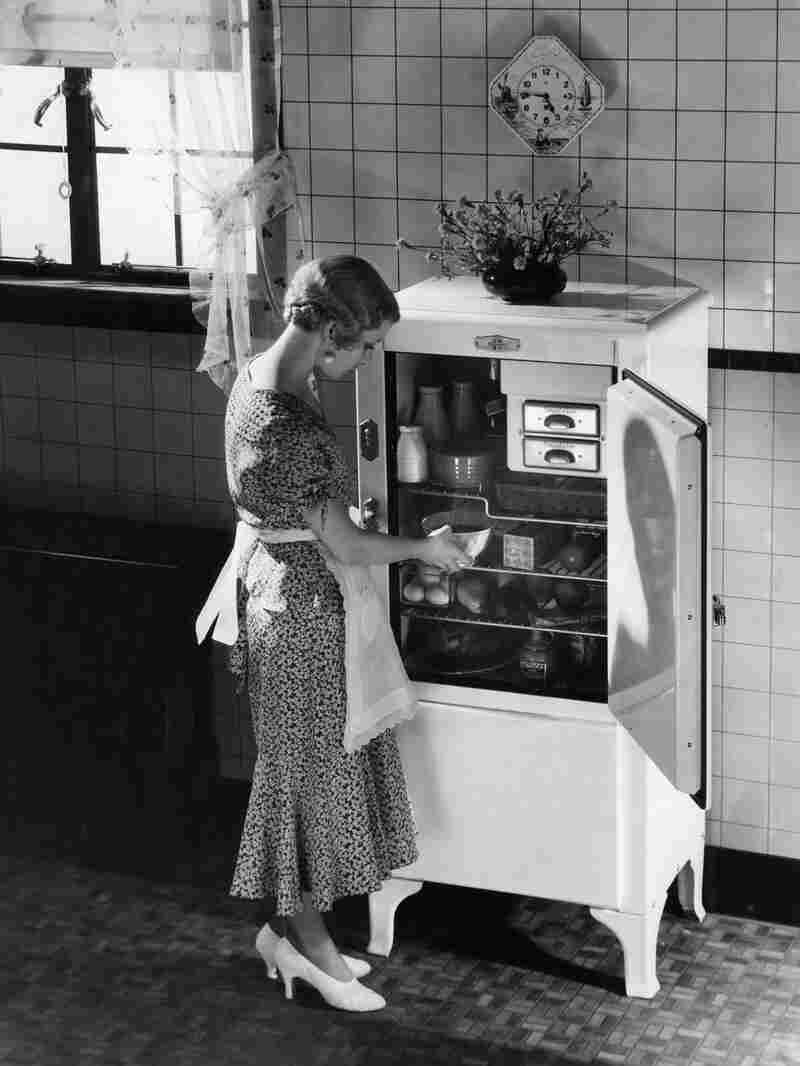 The kitchen of the early 20th century was not one that was welcoming to guests. Charles Phelps/Getty Images hide caption 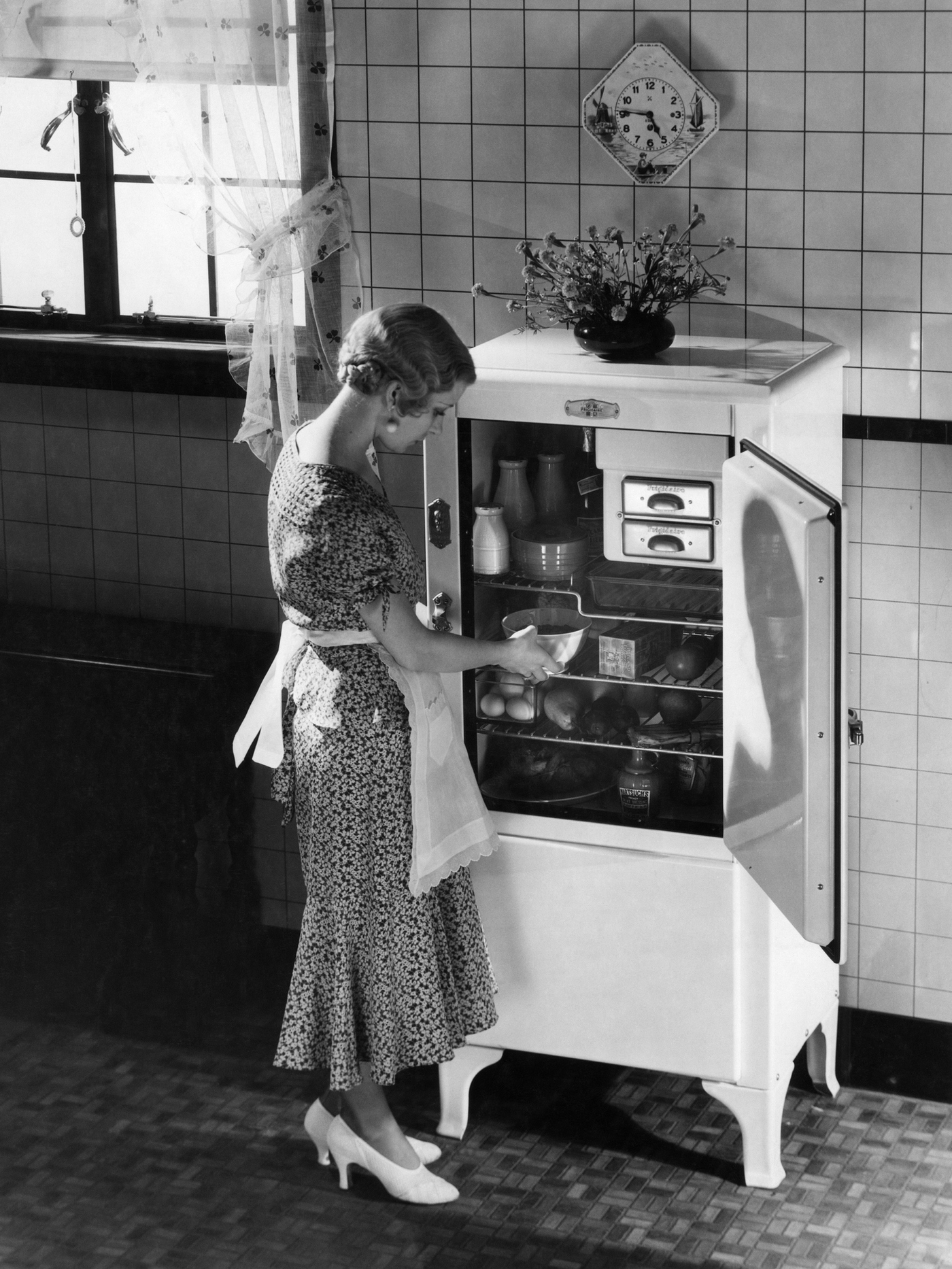 The kitchen of the early 20th century was not one that was welcoming to guests.

Also it didn't smell very good — a trifecta of of poor refrigeration, inefficient cleansers and primitive plumbing. Cromley says that poorer homes and tenements had more central kitchens but that hired household labor was surprisingly common. Until it wasn't.

"As industrialization takes hold in the later 19th and early 20th century," Cromley says, "if you had been a servant, and you could get a factory job, you would make a lot more money."

Households — housewives in particular — essentially became their own domestic labor. And the field of domestic science developed to tell them how best to do it. That meant small kitchens. One ideal was that the housewife could stand in the middle of her kitchen and reach everything. "She would revolve in place," Cromley laughs.

Over the last 100 years, this tiny kitchen expanded, to make room for other household members. And become more of a living space — with design elements like color and windows — because people want to spend time there. Including at parties.

Durand has published her share of stories on how to shunt guests out of the kitchen. But if people do end up there, next to a sink full of dishes and wadded-up tin foil, that's fine, she says.

And that comfort and connection is the reason we gather together in the first place. Even if it happens in the casual mess of a crowded kitchen.