Accessibility links
Mail-Order Pies: An Expensive Slice Of Nostalgia For Which Many Will Pay : The Salt It can cost more to ship a pie than the price of the pie itself, and causes bakers a lot of headaches. So why does business boom over the holidays? Well, that's personal. 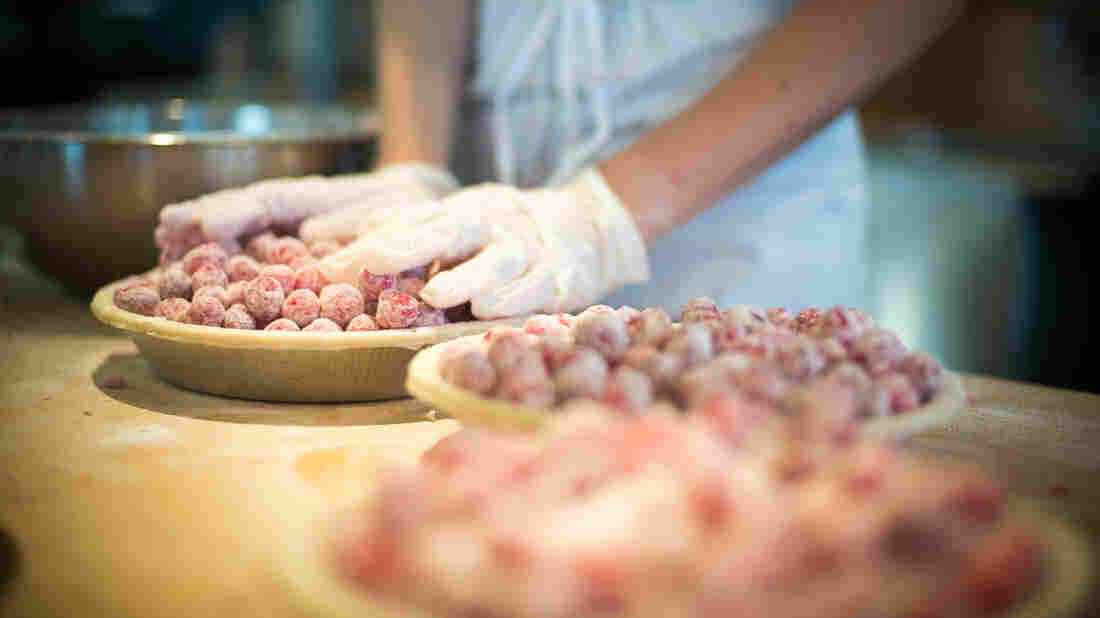 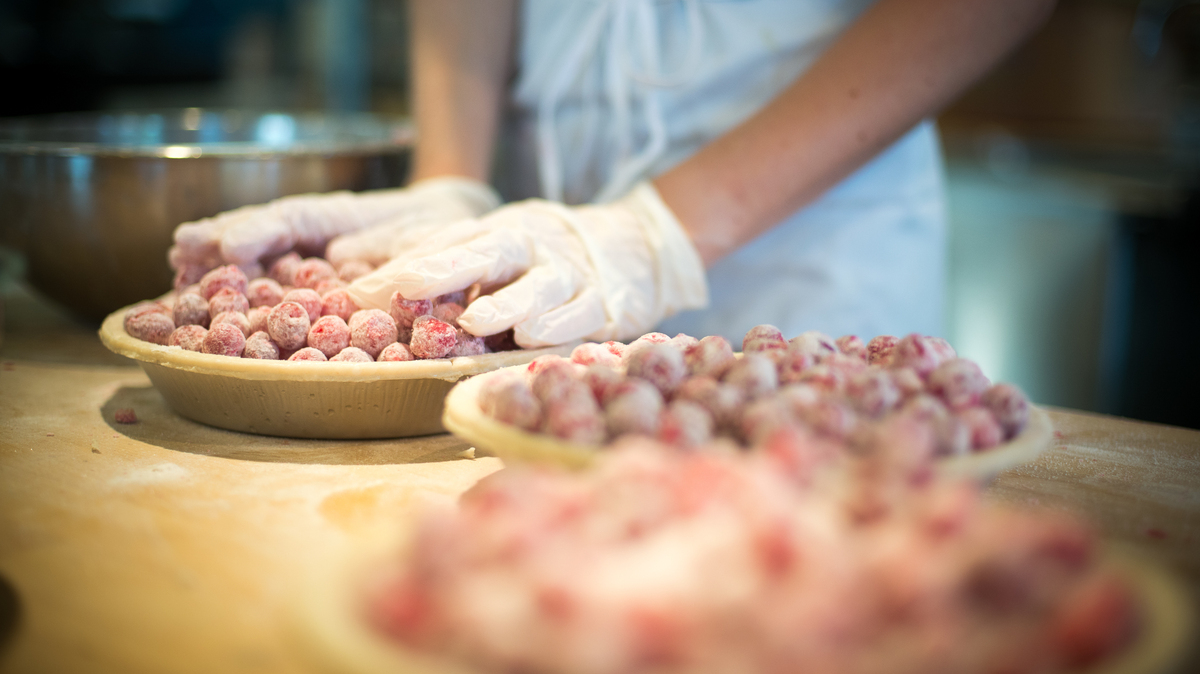 An employee at Grand Traverse Pie Co. in Michigan makes cherry pies. The company has been shipping pies since 1998, when people still had to phone in their orders.

It's almost comical — how hard it is to get this pie out of its box. Inside the well-taped cardboard, there are packing peanuts around another box that's inserted so tightly, lifting it out is like playing a game of Operation.

Finally, I can see the pie. The pastry from Virginia's Red Truck Bakery is swaddled in bubble wrap, shrink-wrapped and topped with a circle of cardboard. And inside all of this, baked into a thick reusable tin, is a pristine mincemeat pie that has spent the past day traveling across most of the country to its final destination at my door in Oregon. 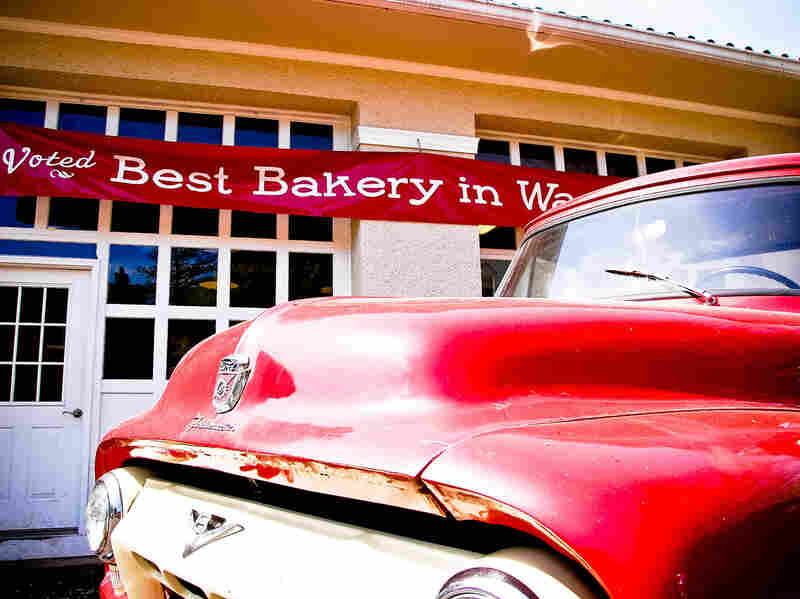 Mail order makes up about 30 percent of business for the Red Truck Bakery in Warrenton, Va. "We've probably done all we can with the two storefronts, and they're at full capacity," says owner Brian Noyes, who just released a new cookbook. Lauren Parnell Marino/Flickr hide caption 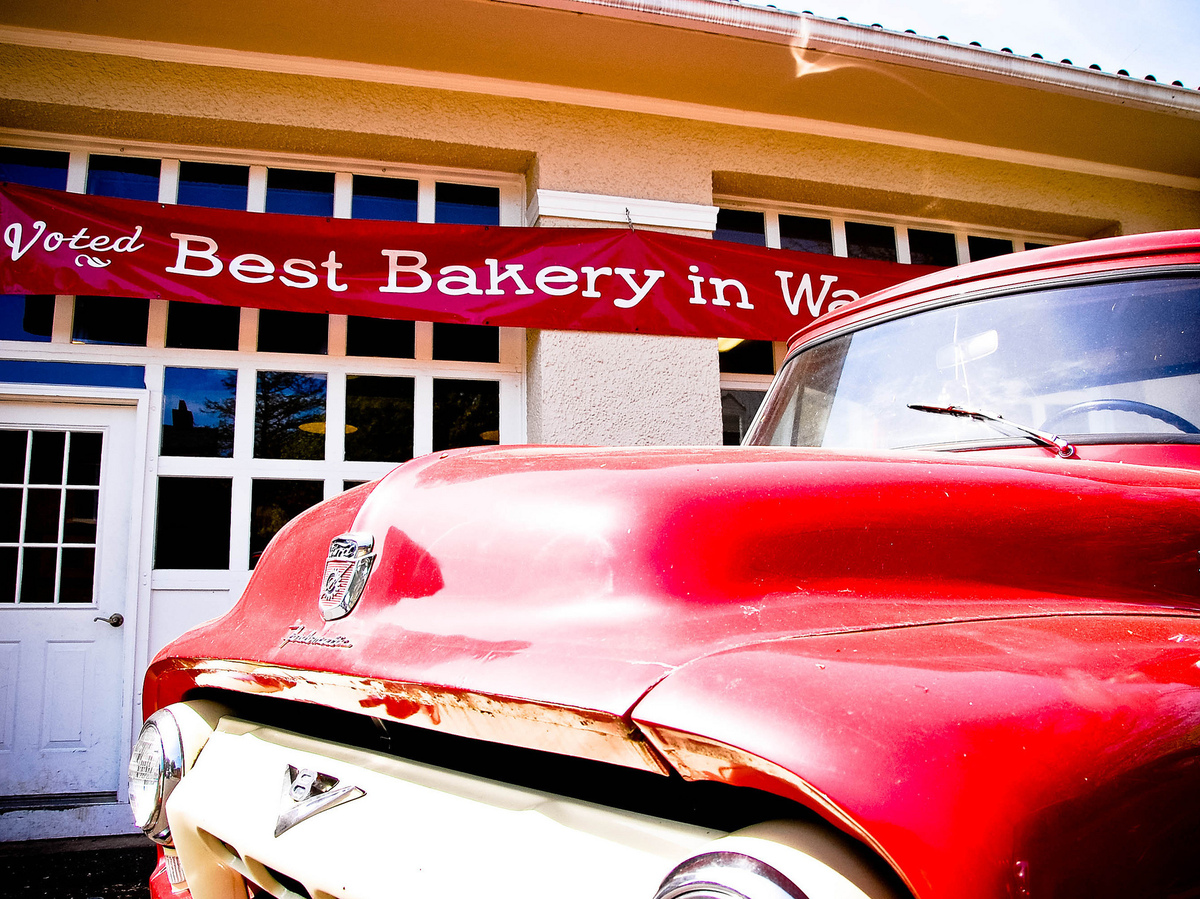 Mail order makes up about 30 percent of business for the Red Truck Bakery in Warrenton, Va. "We've probably done all we can with the two storefronts, and they're at full capacity," says owner Brian Noyes, who just released a new cookbook.

Every year, untold numbers of pies crisscross the country from bakeries to doorsteps, ramping up in popularity just before Thanksgiving and leading up to the winter holidays. The first time I got a pie by mail was after I graduated high school and moved across the country for college. It reminded me of all the things I was missing while comforting my homesickness with each bite.

Brian Noyes, owner of Red Truck Bakery, says shipping makes up about 30 percent of its business. "We've probably done all we can with the two storefronts, and they're at full capacity," Noyes says. He just released a cookbook a few months ago, and is on a book tour that "really opens up a lot of new eyes to what we're doing." And many of those new eyes don't live anywhere near Virginia. But just because there's a cookbook doesn't mean people want to make it. "I always tell people, 'Look, we'll do your baking for you,'" Noyes says.

Making sure that pies get to their final destinations in one piece isn't easy, and it comes with a cost. The expense of shipping a pie (which is always sent by one- or two-day mail, or risk unfreezing or getting squished) varies based on how far it's going, and generally costs as much as the pie itself — maybe even more.

Allison Kave, cookbook author and co-owner of New York's Butter and Scotch, a bakery (and bar!) in Brooklyn, says that a lot of people balk at the prices. "We see a lot of abandoned carts [online] where people in farther-flung places go through the ordering process, then see the shipping rates." As a result, most of their orders come from the tri-state area, where the cost of mailing a pie is much lower.

There's nothing practical about mail-order pies. The sheer amount of logistics that goes into packaging and shipping makes the pies already so expensive for customers that businesses don't tend to mark them up from what people would pay in person. "Frankly, sometimes we ask ourselves if it's worth it," Kave says. "But it's very flattering for someone to want your pie so much that they're willing to pay the insane rates FedEx charges to get it there." Rather than being an important revenue stream, she says, "we think of it as outreach, marketing to a degree."

Many companies have a similar philosophy — they send pies by mail because, well, customers want them. But occasionally, as in the case of Kermit's Key West Key Lime Shoppe, revenue from out-of-state customers can be a lifesaver. When Hurricane Irma hit Key West, Fla., last summer, "We desperately needed our mail-order business," says Karen Haught, director of sales and marketing.

Mail order got them through the months after the hurricane. "Our tourist count was way down," she says. "There are 27,000 people on the island and you're only going to serve so much pie to those people." She compares spending money for a bakery to ship a pie with paying a florist to deliver a dozen roses versus buying flowers yourself at a grocery store. "It serves a different need. It gets a pie to someone who isn't right there." 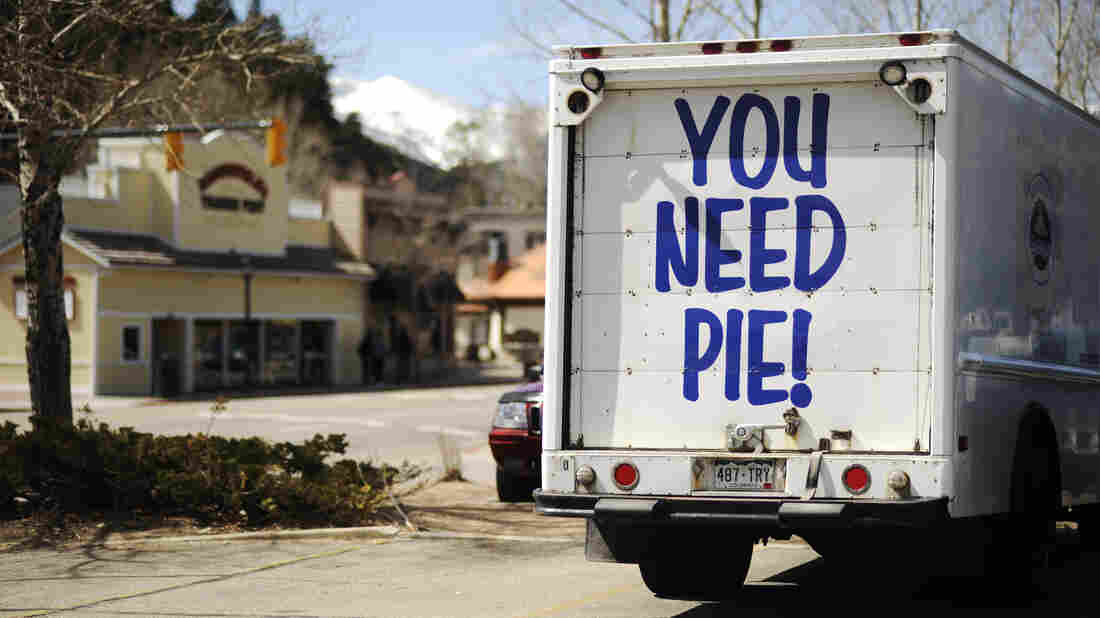 The delivery truck for Estes Park Pie Shop Bakery & Diner in Colorado conveys a pointed message that might make mincemeat out of your appetite control. Cyrus McCrimmon/Denver Post via Getty Images hide caption 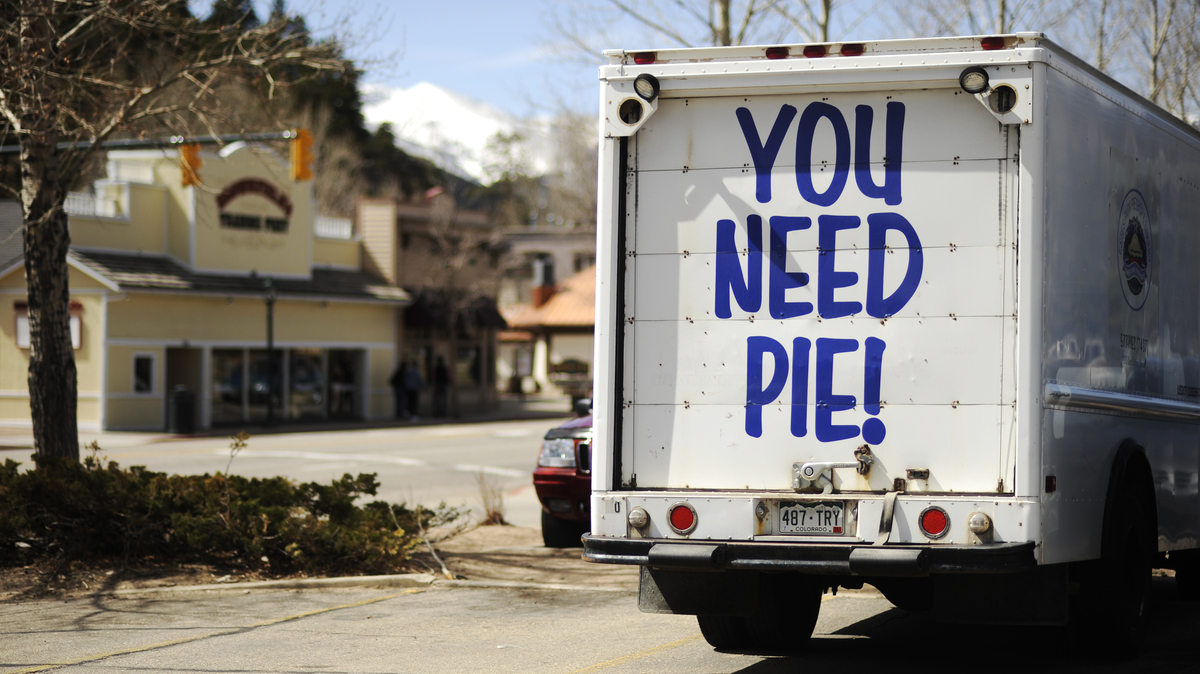 The delivery truck for Estes Park Pie Shop Bakery & Diner in Colorado conveys a pointed message that might make mincemeat out of your appetite control.

Though mail order does reach people who are far away, there are mishaps with pie deliveries. Sometimes, despite bakeries' best packing precautions, pies do get squished or sit too long on a runway because of a delay, arriving long after both the pie and its freezer packs have melted.

"We had an instance one year where the neighbor's dog really got the pie," says Renee Brown, who works in Michigan's Achatz Handmade Pie Co.'s "Pies that Fly" division. "The dog got loose, ripped it up and destroyed it." They replaced the pie, Brown says.

In addition to their six locations, Achatz does wholesale, and even with more than 1,000 pies shipped out in November of this year, mail order represents just a tiny fraction of their sales. "We try to go the extra mile for the customer, and this is one of the things we do." But getting the pies out the door, Brown says, is a "multi-step process" and "a lot of work."

In Kentucky, Transparent Pie Is Clearly A Thanksgiving Winner

Considering that you can buy a pie in almost any grocery store — and there are plenty of specialty shops — there's no reason why non-bakers should have to resort to mail order to get their pie fix. Mike Busley, co-owner of Grand Traverse Pie Co. in Michigan, has been shipping pies since 1998, when people still had to phone in their orders. Most of these end-of-the-year pies are either gifts or wind up on people's holiday tables, Busley says. He tells me that every time he eats a pie, he thinks of his grandmother, who isn't around anymore. "Pie is one of those things that takes you back in time, and there's a whole segment [of the population] that wants to replicate a specific moment in their lives with pie." Busley adds, "People want the best and they're willing to spend more."

Today, more than ever, people travel far from their hometowns for the holidays. They may not have mom's ham, and maybe their Thanksgiving came with canned cranberry sauce instead of fresh, but they can order a pie just like the one they grew up with — in some cases, the exact one they grew up with — and have it delivered to their doorsteps.

Brown tells me that Achatz has a long-time customer who lives in Minnesota. "Whenever she's in town, she wants to go to the nearest [location]," Brown says. Even when it's a four- or five-hour drive. "But she goes because she wants a cannoli pie. People are crazy for pie," she says, then pauses. Almost as an afterthought, she says that they now ship that variety by mail.