Accessibility links
Customizing Flavor For Chefs Is Growth Strategy For Indoor Farm : The Salt Chefs are turning to Fresh Impact Farms, located in an unassuming strip mall outside of Washington, D.C., when they want edible flowers, herbs, and greens that do more than just make a pretty plate.

Beyond Garnish: How Science Helps An Indoor Farm Amp Up Flower Flavor

Beyond Garnish: How Science Helps An Indoor Farm Amp Up Flower Flavor 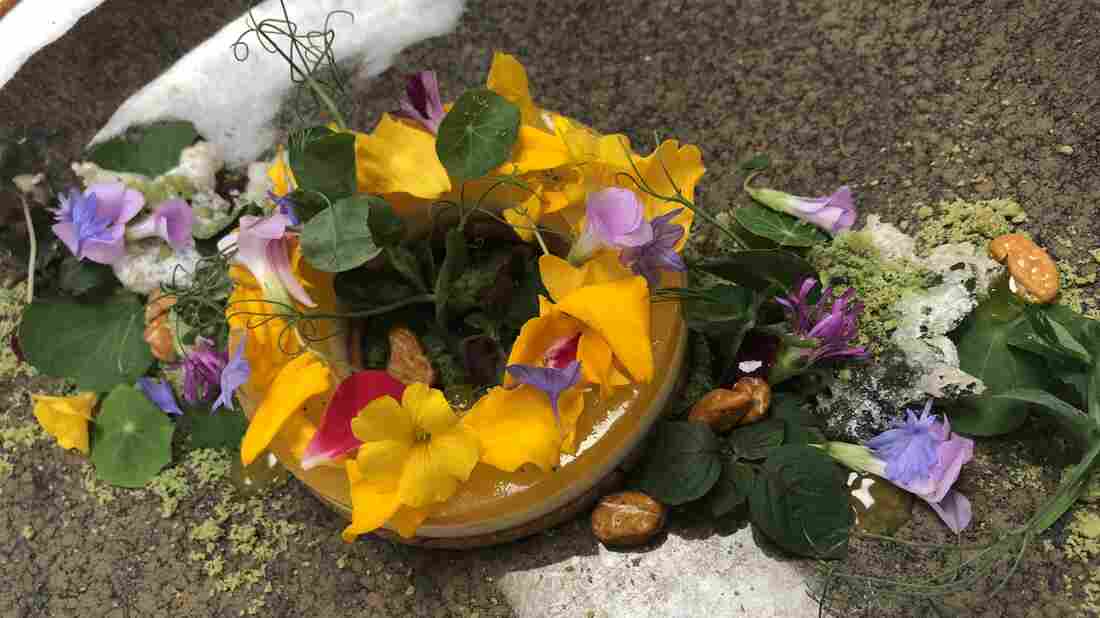 From inside the overly-lit interior of a 1960s strip mall, software programs and science are helping an urban farm fire up the flavor of fennel fronds and control the size of nasturtium leaves. By carefully monitoring each variable and its impact on the way a plant tastes, looks and grows, Fresh Impact Farms is inching closer to its goal: delivering edible flowers and herbs catered to the taste preferences of top-tier chefs.

To that end, nutrient mix, water temperature, light spectrum and countless other variables are regularly tweaked to produce more of the thumb-sized, lily-pad-shaped leaves chefs prize from nasturtium, each packed with a peppery punch. Lights at the "far red" end of the spectrum shine down on the same plant to coax its orange and vermilion blooms to appear earlier and more often. Every change is an experiment, and every aspect of the plant a potential moneymaker.

But, even though everything grown at the 1,000-square-foot farm in Arlington, Va., will likely be the last element placed onto the plate and the first pop of color a restaurant diner sees, "this isn't a [typical] garnish farm," says owner Ryan Pierce. 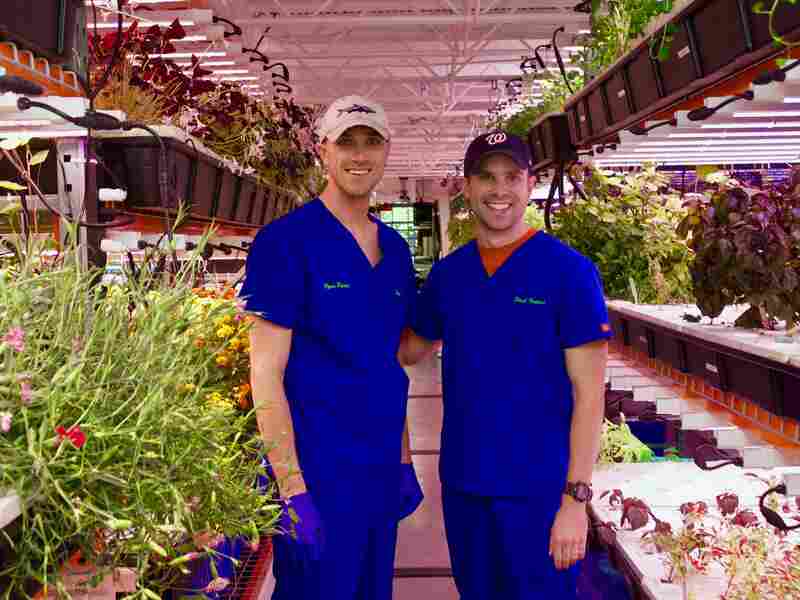 Fresh Impact Farm owner Ryan Pierce (left), and operations chief Matt McKinstry (right), stand in the 1,000-square-foot space in a suburban strip mall where they grow up to 60 varieties of edible flowers, herbs and greens at a time for restaurants. Whitney Pipkin for NPR hide caption 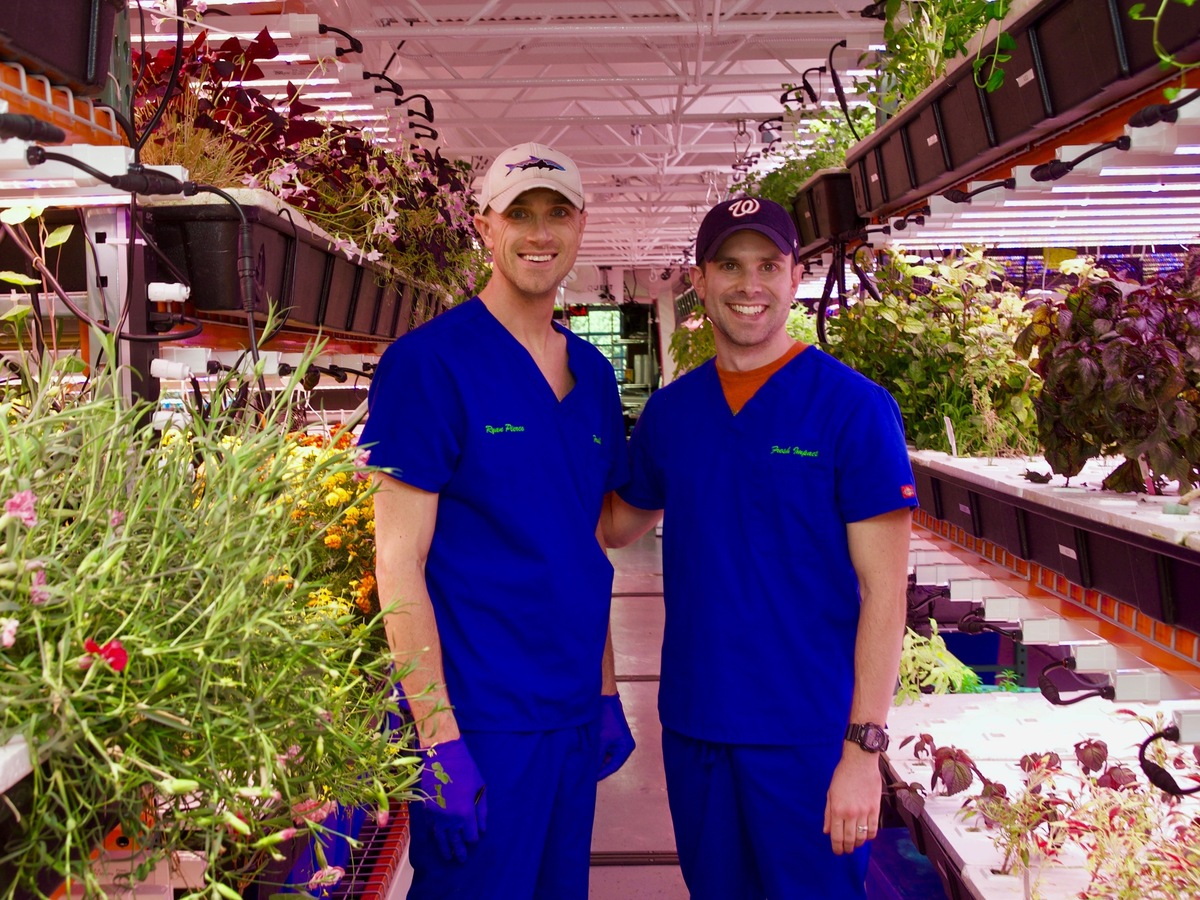 Fresh Impact Farm owner Ryan Pierce (left), and operations chief Matt McKinstry (right), stand in the 1,000-square-foot space in a suburban strip mall where they grow up to 60 varieties of edible flowers, herbs and greens at a time for restaurants.

"We didn't set out to just grow things that are pretty," adds Pierce, who, at 32, looks like an off-duty surgeon in blue scrubs, disposable gloves and a hat worn for food safety. "We set out to grow things that become an element of the flavor of the dish. We want to give chefs a palette to elevate their food."

Pierce comes to the field of hydroponic growing from a career in cloud computing, where he learned to make sense of a dizzying number of data points. He saw in indoor farming an opportunity to apply that background while producing edibles in a way that uses less water and land, reducing pollution and waste in the process.

Those same factors have fueled the hydroponic industry's meteoric growth in recent years. For urban farmers looking to make the most out of limited spaces, microgreens are often the crop of choice. But shoots and sprouts comprise only a small fraction of Pierce's business. 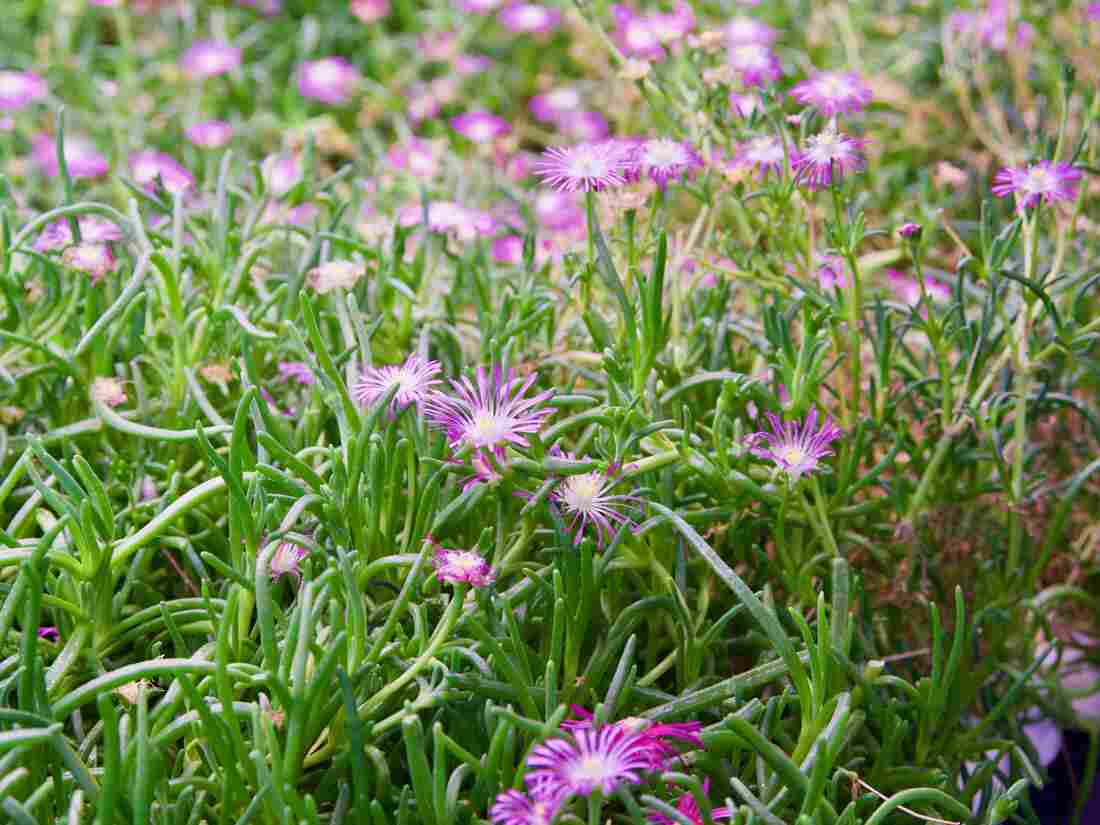 A purple ice plant flourishes under a spectrum of light designed to help it flower and thrive in an indoor environment at Fresh Impact Farms in Arlington, Va. /Whitney Pipkin for NPR hide caption 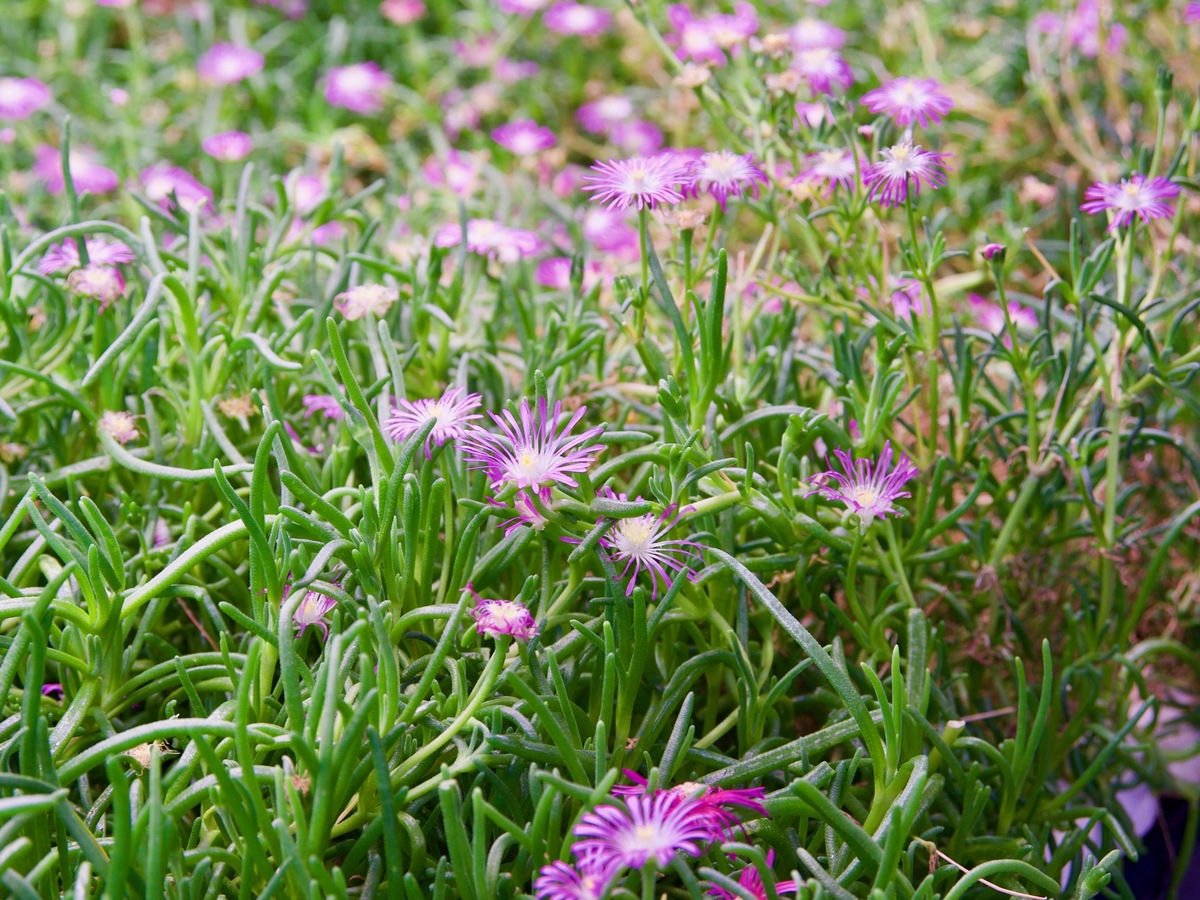 A purple ice plant flourishes under a spectrum of light designed to help it flower and thrive in an indoor environment at Fresh Impact Farms in Arlington, Va.

Instead, he has found a way to infuse surprising flavor into the plate-topping flowers, herbs and greens restaurants are already accustomed to buying.

Take one of the many varieties of hyssop that Fresh Impact grows, says D.C. Chef Robert Wiedmaier, whose high-end D.C. flagship Marcel's was the farm's first customer. "You close your eyes, taste that and it's like, 'Wow. What is that? Boom.' "

The hyssop, which smacks of mint and licorice-y anise, tops pan-seared scallops at Wiedmaier's Michelin-starred restaurant, Siren, and makes cameos in cocktails. Wiedmaier is such a booster of Pierce's business that he hosted a five-course dinner featuring the farm at Siren this fall. There, candy apple sorrel-flavored meringue topped a black sea bass dish and bright orange marigolds starred in a Japanese dessert with pineapple sage shortbread.

But Wiedmaier says: "You can't throw flowers on just anything." These garnishes must be used with care or they could overpower a dish. The musty marigold can be a challenge to deploy correctly, even if it's pretty.

Some of Fresh Impact's products pack such a flavor punch, they should come with a warning label. But chefs can't seem to get enough of the hard-to-grow and equally potent wasabi arugula. And, at the Japanese tasting room Nasime in Alexandria, Va., chef-owner Yuh Shimomura isn't timid about plating tiny yellow flowers from the toothache plant, so named because of their intense saliva-increasing, tongue-numbing effect.

Since launching in 2016, the farm has experimented with 250 plant varieties and currently grows between 50 and 60 at a time. Many of the successful varieties were originally suggested by chefs — some of them new to the concept that a farm could tweak the flavor of an herb or flower they thought they knew so well. 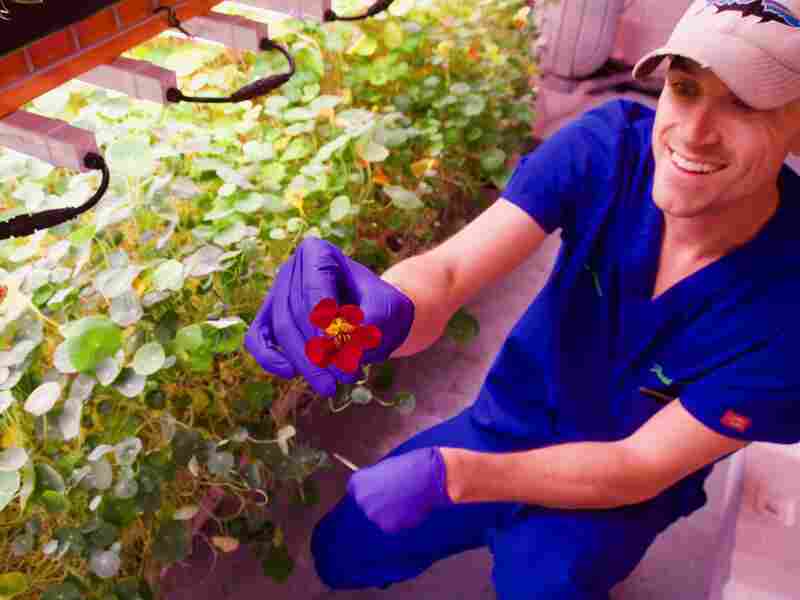 Ryan Pierce holds one of the nasturtium blooms prized by his chef-customers for decorating and flavoring dishes at high-end restaurants. /Whitney Pipkin for NPR hide caption 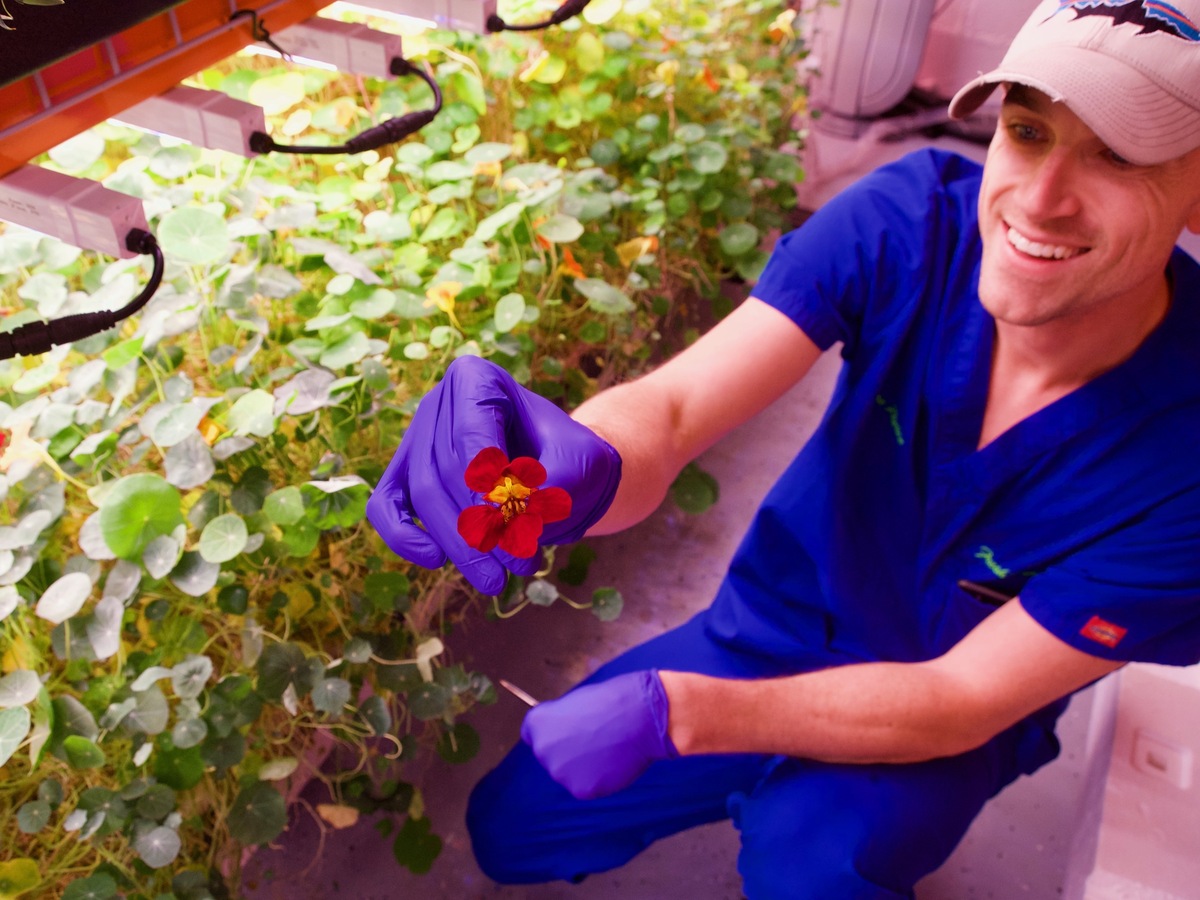 Ryan Pierce holds one of the nasturtium blooms prized by his chef-customers for decorating and flavoring dishes at high-end restaurants.

When Johnny Spero, executive chef and owner of Reverie in Washington, D.C., first requested that Pierce grow huacatay, a feathery plant used in Peruvian stews and sauces, he expected it to taste as pungent as varieties he'd tried elsewhere.

But Pierce's was milder, and Spero initially asked if he could make it more intense.

Adding "intensity" entails stressing the plant, something that is hard to do in a controlled environment where the plants are protected from the elements. Pierce can mimic that stress with an imbalance of nutrients, by applying different spectrums of light or by harvesting leaves from older plants—but every crop is different.

"Our goal is, as we collect data, to understand how small shifts change the overall flavor and success of the crop," he says. "Ultimately, we want to get to a point where we can tweak those crops on demand to produce specific flavor outcomes."

The farm's latest experiment? The succulent iceplant. Its leaves look like water droplets have frozen, still dewy, on the surface, and biting into one of them delivers a blast of hydration. One of Siren's chefs has said he wants the largest leaves possible for a dish he's dreaming up. Meanwhile, chefs at D.C.'s two-Michelin-starred minibar by José Andrés say they want the tiny clusters of leaves the plant produces before it blooms.

"If we can get it to production, we already know we have two customers interested in different parts of the plant," says Pierce.

The farm worked with a company to develop its own software that tracks the feedback received from chefs for each crop. If a chef thought a batch of bronze fennel was too bitter or too sweet, that information is stored and considered for the next crop.

Eventually, Pierce wants to bring all of that data into real-time — with chefs providing feedback through an app. Already, monitors on each of the water basins report data on its Ph, temperature and overall nutrient level to a computer every four seconds. The goal is to eventually measure each of the 17 nutrients essential for plant growth — all the time.

"The challenge is for us to drill down to that level," says Pierce, who'd like to get the flavor-changing equation down to a science. It's not going to be easy, he admits. "If you feel like you have this down already, then you're not doing something right."