Accessibility links
Kentucky Distillers Scientifically Emulate A Century-Old Bottle Of Bourbon : The Salt A discovered pre-Prohibition bottle of Old Taylor, named after a whiskey world icon, inspired a distillery to use chromatography to examine the bourbon's murky past and try to recover its flavor. 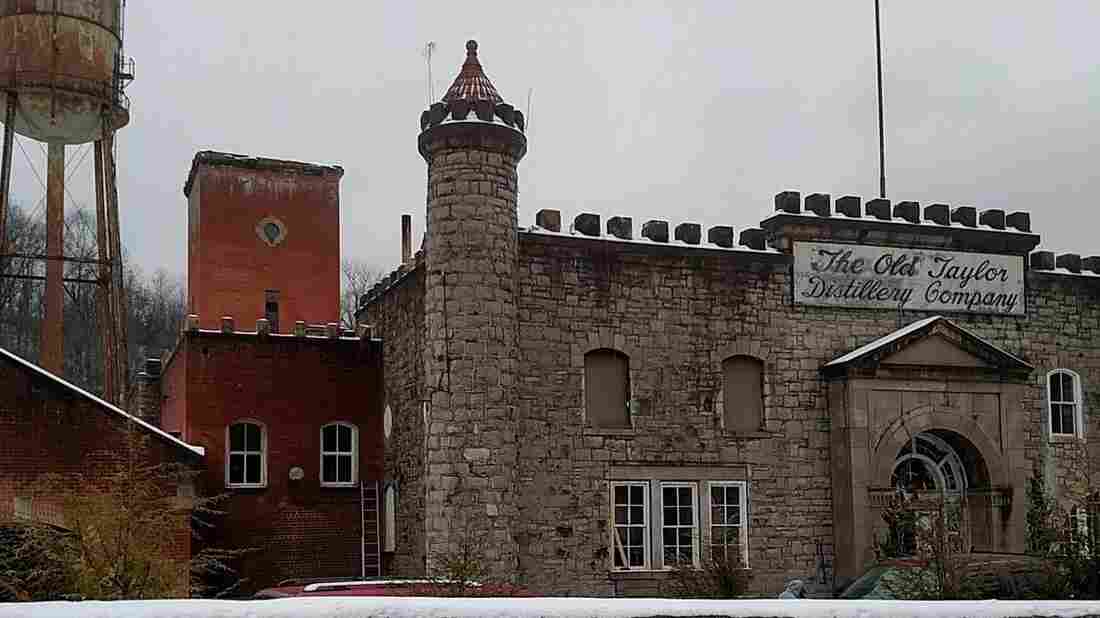 This is the original Old Taylor Distilling Co. castle in 2016. At the time, the property was still under renovation. Ashlie Stevens/WFPL hide caption 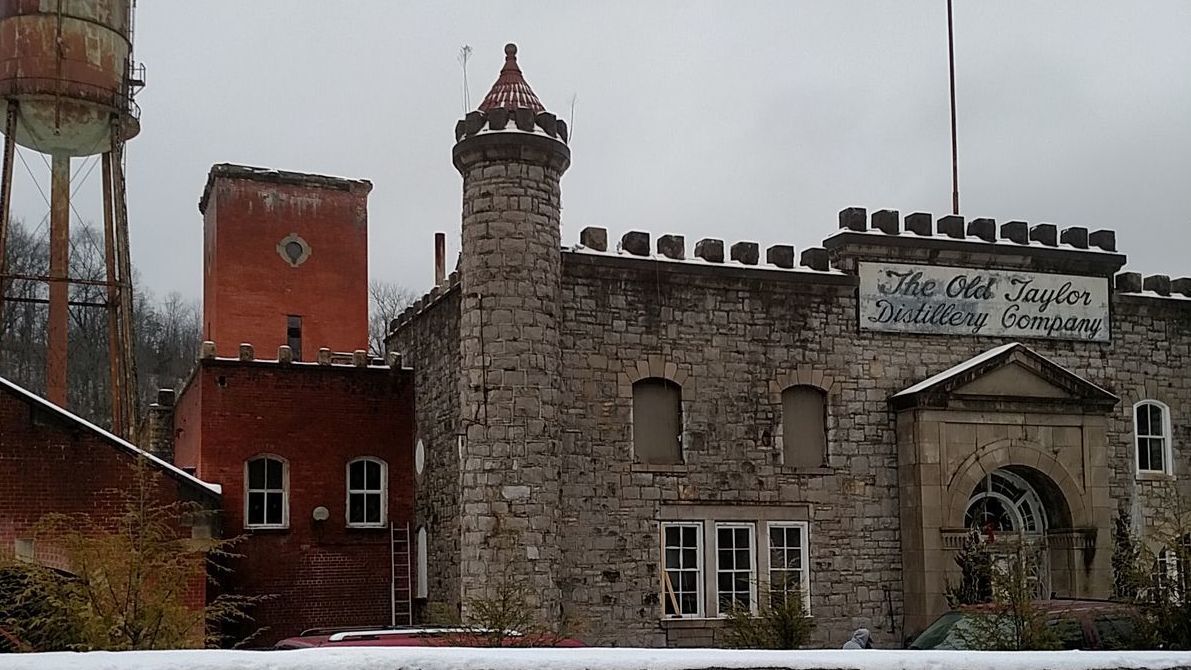 This is the original Old Taylor Distilling Co. castle in 2016. At the time, the property was still under renovation.

Several years ago, while Marianne Eaves was in the midst of renovating Castle & Key Distillery outside of Versailles, Ky., she came across an antique bottle of Old Taylor bourbon.

The distillery grounds had originally belonged to Col. Edmund Haynes Taylor, Jr. (known in the whiskey world simply as E.H.). Taylor was a leader in industrializing bourbon production during the early 20th century.

After Taylor died in 1923, the distillery passed through several owners, but eventually fell into neglect for 40 years. The grounds became a tangle of foliage and the exterior of buildings began to crumble.

Then in 2015, Eaves — who is the first female Master Distiller of Kentucky bourbon since Prohibition — along with her business partners, Will Arvin and Wesley Murry, began to bring the distillery into the modern age of bourbon production.

But that antique bottle of Old Taylor, which was originally released in 1917, inspired Eaves — whose background is in chemical engineering — to use new technology to examine the bourbon's past.

"The most dominant flavor in that 1917 bourbon was the butterscotch note," Eaves says. "That's something that bourbon aficionados and the 'dusty hunters' recognize about historic Old Taylor bourbon is this beautiful, rich, creamy, sweet butterscotch note — and the mouthfeel of that particular bottle was really unique for a historic whiskey."

That taste was something Eaves wanted to incorporate into Castle & Key's bourbon, but she was at a dead end of sorts. While modern bourbon brands keep meticulous notes on measurements and processes, pre-Prohibition brands, such as Old Taylor, were built largely on oral histories.

"They were just going all on flavor. They had these processes that had been handed down for hundreds of years, so they were just doing things the way the guy before them had — just knowing it would make alcohol," Eaves says.

And while she didn't know Taylor's exact process, Eaves had both tradition and science her side.

Susan Reigler, a bourbon historian and biologist, explains that in order for a distillate to be considered bourbon, it must meet a few basic requirements: the spirit has to be grain based; the mash bill (mix of grains) has to be 51 percent corn; it must be aged in new, charred-oak barrels; and it must not be introduced to the barrel at higher than 125 proof. 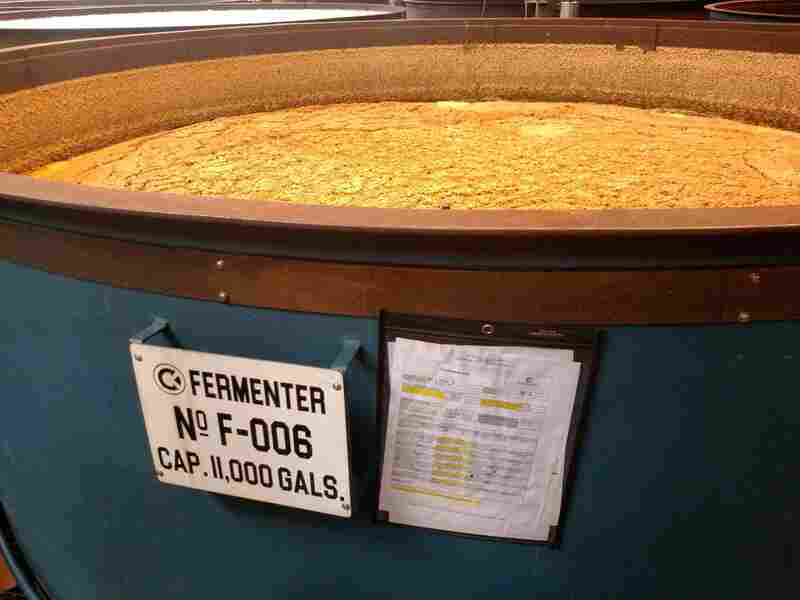 After the grain mash is cooled at Castle & Key, it's placed in a large tub where it begins to ferment. During alcoholic fermentation, yeasts convert the sugar into alcohol and carbon dioxide. Ashlie Stevens/WFPL hide caption 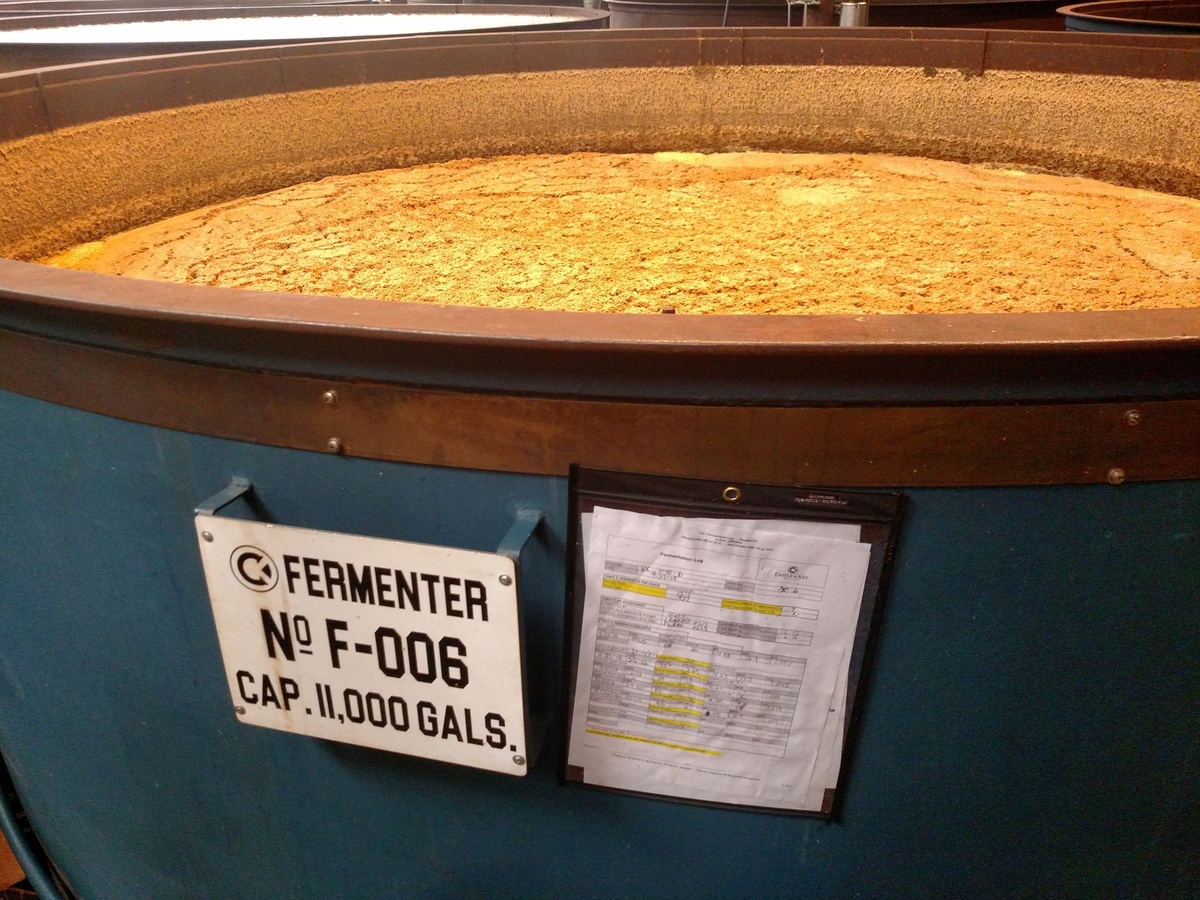 After the grain mash is cooled at Castle & Key, it's placed in a large tub where it begins to ferment. During alcoholic fermentation, yeasts convert the sugar into alcohol and carbon dioxide.

"Because of this, certainly, the process that goes on in the still is basically the same — the chemistry is the same," says Reigler, who is also the author of The Bourbon Tasting Notebook. "And the compounds in the spirit are something that can be assessed."

Which is exactly what Eaves did.

"We decided to use a good old-fashioned 'GC' — gas chromatography," she says.

Chromatography is a process used by scientists to separate a mixture of chemicals, in liquid or gas form, into components by running it over the surface of another substance, typically a liquid or solid. A visual example often used in classrooms is pouring a water droplet onto an ink mark on a piece of paper. The ink — which is a liquid mixture of several dyes — will separate on the paper into distinct, colored streaks.

In the case of the Old Taylor bourbon, the liquid was separated into different chemical compounds.

"Then we looked at these chemical compounds and from there, we were able to figure out what grains he was using, [and found] a yeast strain that has a similar flavor profile," Eaves says. "So that's how we went about it and constructed our recipe based on it, loosely. We didn't really want to replicate what he was making exactly, but take those flavor cues from the past, and then model our recipe around that."

The bourbon is distilled and is currently aging for a minimum of four years.

According to Reigler, many people still don't recognize all the science and technological innovations that underpin the bourbon industry — from increasingly computerized distilling systems to spirits analytics like what Eaves did with the antique bourbon.

"We have a lot more people in white coats that are involved in the bourbon industry, so I think all of that is very different than what E.H. Taylor would have been familiar with," she says.