Accessibility links
Memphis Food Hall Enlists Refugee Chefs To Feed, Educate Community : The Salt At a time when refugees are feeling less welcome than ever in the U.S., a group of them have built new lives in a Southern city by sharing their food and culture with locals. 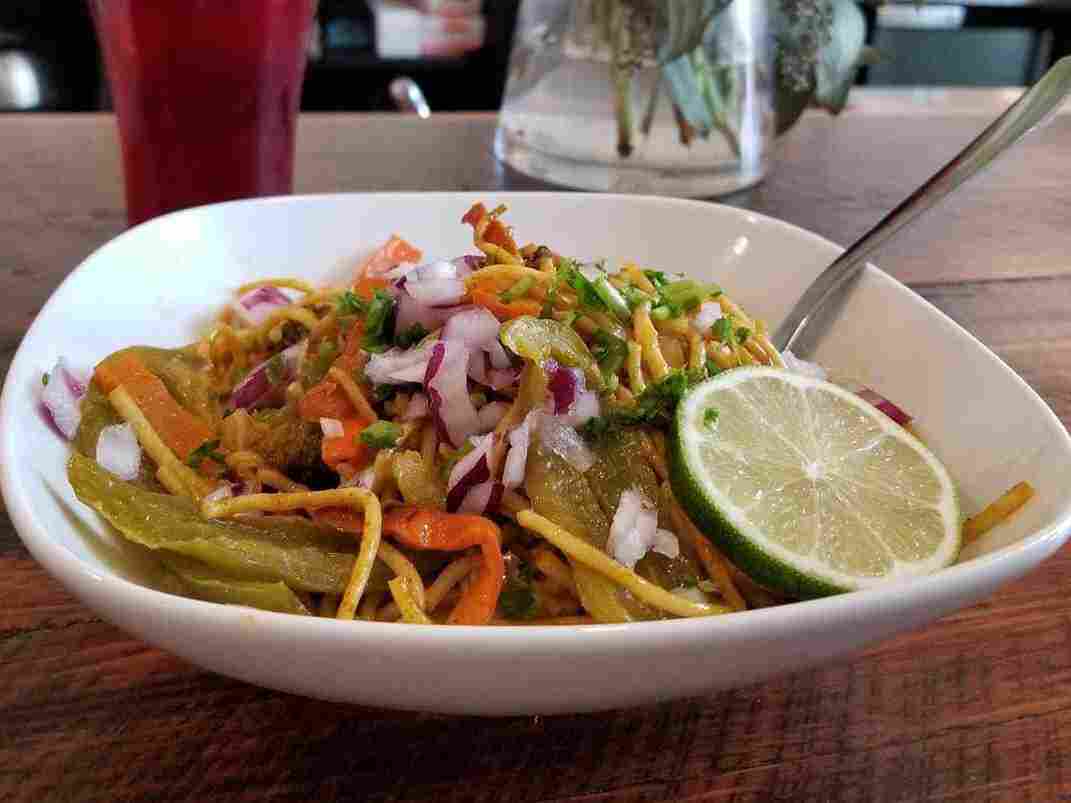 Nepal native Indra Sunuwar's vegetarian chow mein is a favorite order of regular customers to the café. Sunuwar arrived in Memphis with her family as a child refugee. Global Café hide caption 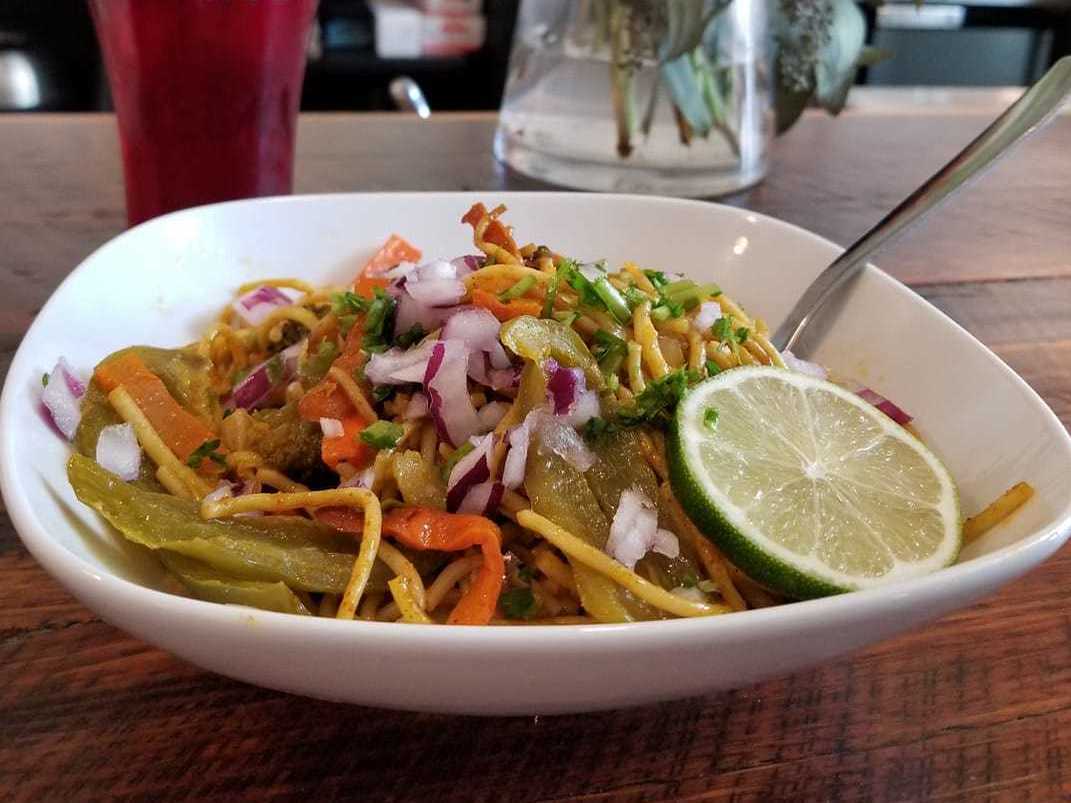 Nepal native Indra Sunuwar's vegetarian chow mein is a favorite order of regular customers to the café. Sunuwar arrived in Memphis with her family as a child refugee.

Seven years ago, Nepal native Indra Sunuwar, now 23, arrived in Memphis, Tenn., with her mom, dad and four siblings. They were seeking an opportunity for a better life. "I was really surprised by the cars and buildings and everything," she says. "I'd never seen a city like this before."

Her family was resettled in Memphis by Catholic Charities of West Tennessee, which showed them how to do things like buy groceries and take a bus. For the first few years, the transition wasn't that smooth for Sunuwar, who struggled to connect with her peers at school. "I made a lot of friends from other different countries, like Somalia, and I get along easy with them because they're like me," she says. "But I didn't really get close with American students. I don't know why; it was just uncomfortable."

After graduating from high school, Sunuwar was working at the commercial Kaleidoscope Kitchen with a fellow refugee named Ibti Salih, from Sudan, when they met Sabine Langer. They didn't know it right away, but Langer would soon change the course of their lives through a food hall she would launch called Global Café. 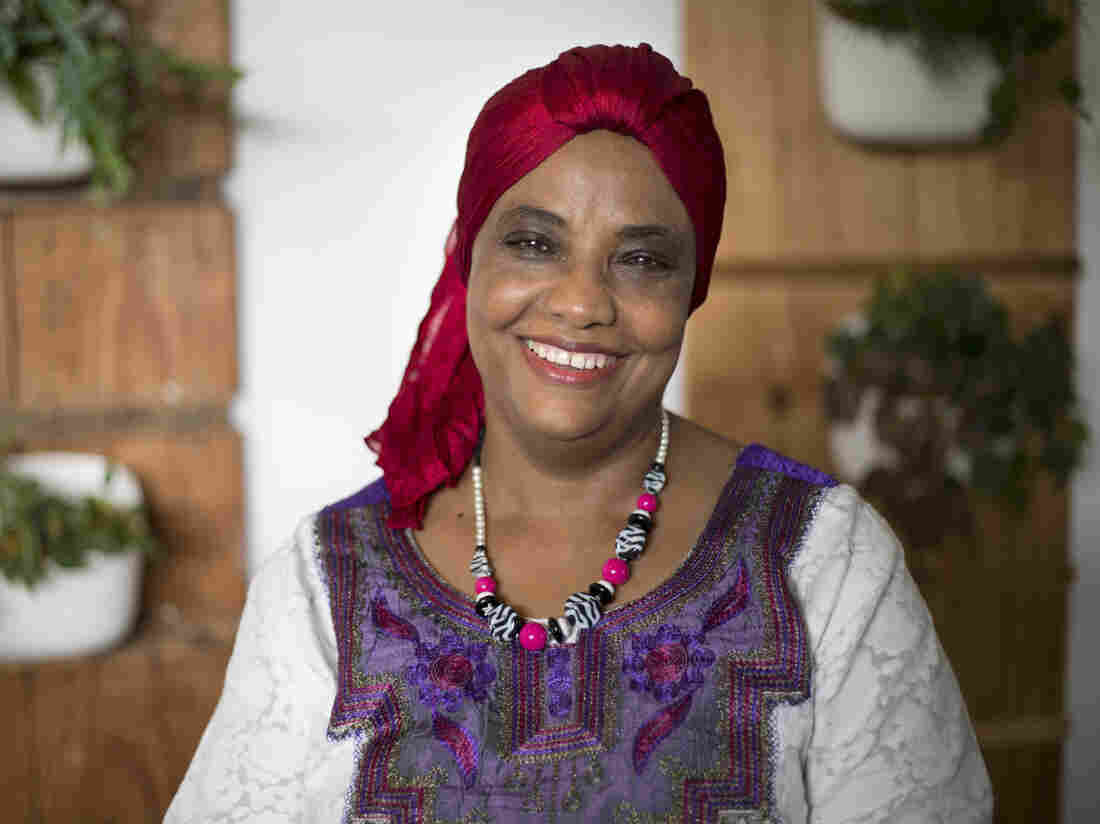 Ibti Salih, a refugee from Sudan, encourages customers to try her dishes, even if they are unsure. "I give you a bit of my heart, a bit of my love." Global Café hide caption 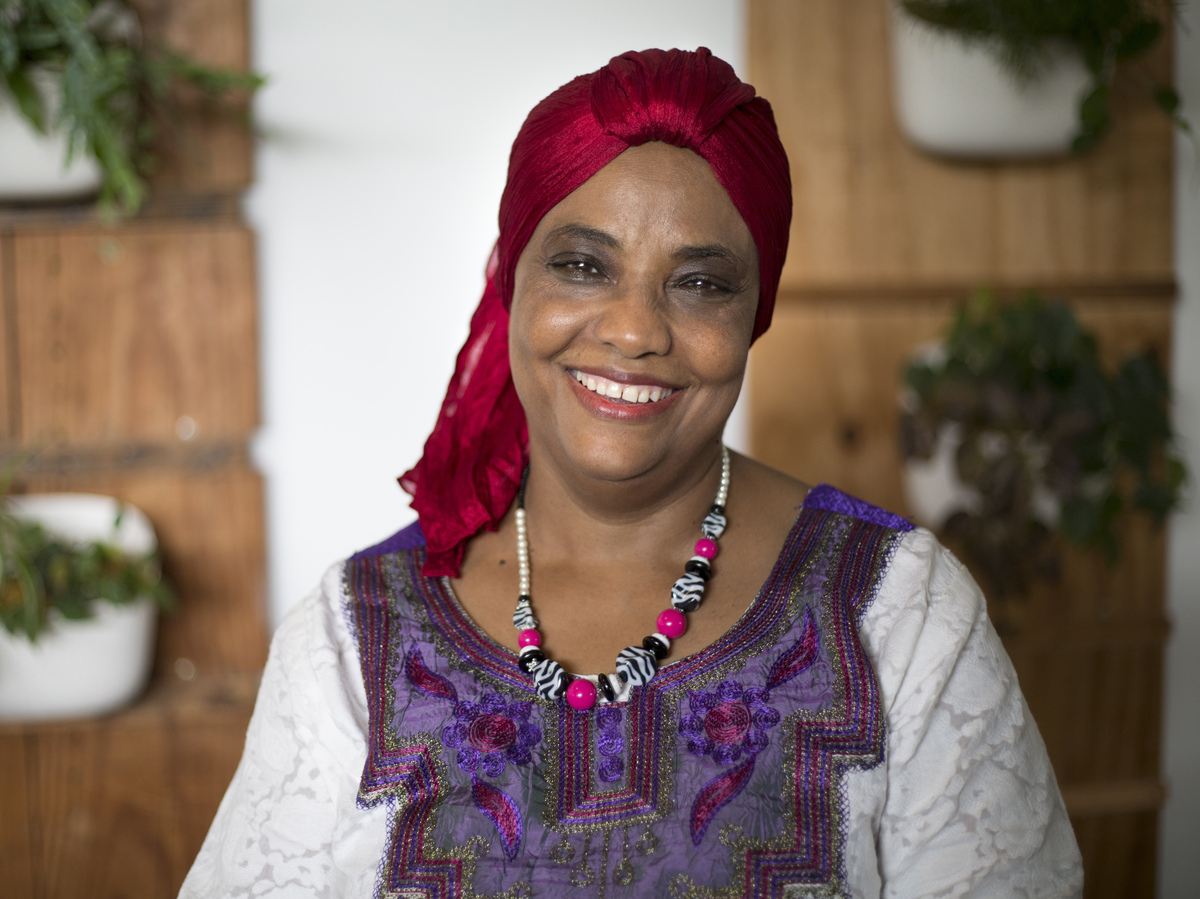 Ibti Salih, a refugee from Sudan, encourages customers to try her dishes, even if they are unsure. "I give you a bit of my heart, a bit of my love."

Langer herself is an immigrant. She was born in Switzerland and came to the United States when she was 21, finally settling in Memphis in 2012. She was volunteering with the Refugee Empowerment Program — an initiative that provides resources like after-school programs — in Memphis' Binghampton neighborhood when she began to think about how fresh, local food could make a difference in the community at large, and that there were immigrants who were willing and able to help.

"I met these amazing women from different countries who were cooking on the side as a hobby or a way to make extra income," says Langer. "Some of them were dreaming about owning a restaurant but were not in a financial position to do that."

So she formulated an idea for an international food hall that would bring together cuisines from around the world, providing job opportunities for refugees and supplying Binghampton with healthy food sources. Denver's Avanti Food & Beverage, which features seven eclectic restaurant concepts under one roof, was one source of inspiration for Global Café, which Langer opened in August.

Guests come to Global Café to try authentic, affordable dishes prepared by refugee food entrepreneurs from three different countries. Yet Global Café also serves as a gathering place, helping members of the community break bread together while learning about other cultures.

This Southern city near the Mississippi border seems like an unlikely place for such a concept. Yet the area is surprisingly diverse: In 2016, there were more than 70,300 immigrants living in Memphis — about 11 percent of the total population, according to a compilation of data from New American Economy, a bipartisan research and advocacy firm focused on immigration policy. Memphis is also home to one of 20 World Relief offices in the U.S., which partner with churches and communities to provide transition programs for refugees and immigrants.

The area's diversity is projected to grow. Between 2010 and 2015, the overall population of Memphis grew 2.2 percent, while the immigrant population increased 2.7 percent. The trend mirrors one the entire country is experiencing, with U.S. foreign-born population reaching its highest level since 1910 (13.7 percent in 2017, up from 13.5 percent in 2016), according to U.S. Census data.

Even armed with these statistics, Langer — who's vegan, doesn't cook and has no culinary background — took a big gamble getting into the restaurant business. Yet she saw a need.

"I eat a lot of ethnic food, and often found myself in hole-in-the-wall places in not-so-great neighborhoods," says Langer. "I thought, what if we could create a place for an Average Joe who would love to try something else, but hasn't had the courage to go to a neighborhood that's a little more salty [to get it]?"

She asked both Sunuwar and Salih to come on board, inviting them to have their own cooking stalls in Global Café, where they could prepare beloved dishes from their home countries and serve them to the local community while sharing a bit about their culture, too. The open floor plan of the café makes it possible for customers to speak with the chef every time they order, as long as it's not too busy.

Fayha Sakkan, who fled Syria with her husband in 1992 and helps other refugee families get settled in Memphis, was the third chef Langer asked to be part of Global Café. Sakkan had worked as a nanny for over two decades and was doing catering on the side when she learned of the opportunity.

Indeed, Sakkan's chicken kababs and tabouleh have already become something of legend at Global Café in just a few months.

The other chefs have experienced similar success: Sunuwar's momo (Nepalase dumplings) and samosas, which she makes fresh to order, sell like hotcakes. One frequent customer comes in almost daily for vegetarian chow mein, often asking her about Nepal and when she's going to open her own restaurant.

"It means a lot to me," says Sunuwar. "Cooking is like, the way you get connected with people, or how you can prove yourself or learn about different countries."

But their journey hasn't been easy. While each of them talks about how well their food has been received, and how the community around Global Café has been welcoming, Langer says the assimilation process is arduous.

Refugees often get settled in a country with no advance notice, she says, so they don't have time to learn the language or the customs. Typically they get the first job they can get that doesn't require English or skills, and end up in a warehouse job. Many of them are highly educated — like Salih from Sudan, who has degrees in psychology and philosophy — but their paperwork doesn't translate, or they don't have paperwork due to an emergency situation.

"It's kind of a cycle; they work hard, and don't have time to take English lessons because they're busy trying to survive," says Langer. "You could be in country for decades and not really learn the language, and sometimes that brings up comments from people that they're not working toward integration."

Now a dual citizen of Switzerland and the United States, Langer knows the struggles first hand. "My process was pretty difficult from a rich country," she says, "but being a refugee is a million times harder than being an immigrant."

That's a big reason she tries to employ as many refugees and immigrants as possible. Global Café's general manager is from Mexico, and the chefs each have assistants from their home countries.

This idea of spreading refugee cuisine is taking off in other cities around the country, too. West Side Bazaar, in Buffalo, N.Y., functions as a small-business incubator for immigrants and refugees, with nine restaurants helmed by refugee or immigrant chefs, ranging from Asian Halal to Ethiopian cuisine. There's been talk of turning Seattle's King Street Station into an immigrant food hall similar to Global Café. And organizations like Komeeda, a New York-based company that puts on food events, launched a series called Chefugee Cuisine, meant to help refugee chefs share their native cuisine.

Bite by bite, it appears to be making a difference.

A Memphis taxi driver from Somalia visits Saliih's stall at Global Café every day because the food reminds him of dishes his grandmother used to make back home. Sometimes he even brings one of his customers with him. If they're in doubt at first, Salih's famous falafel — which she says once brought a guest to tears — soon changes their mind.

What they don't realize is that the reward goes both ways. "I miss my country a lot, but when I cook, and share my stories and my food with the people, it gives me a really good feeling about my culture," says Salih. "I always just say just try it. I give you a bit of my heart, a bit of my love."