Accessibility links
Through Food Art, Asian-Americans Stop 'Pushing Heritage To The Back Burner' : The Salt Some Asian-American artists are sculpting the dishes of their youth to explore their race and identity. And through Instagram, they're also connecting with others who yearn for a taste of their past.

Through Food Art, Asian-Americans Stop 'Pushing Heritage To The Back Burner'

Through Food Art, Asian-Americans Stop 'Pushing Heritage To The Back Burner' 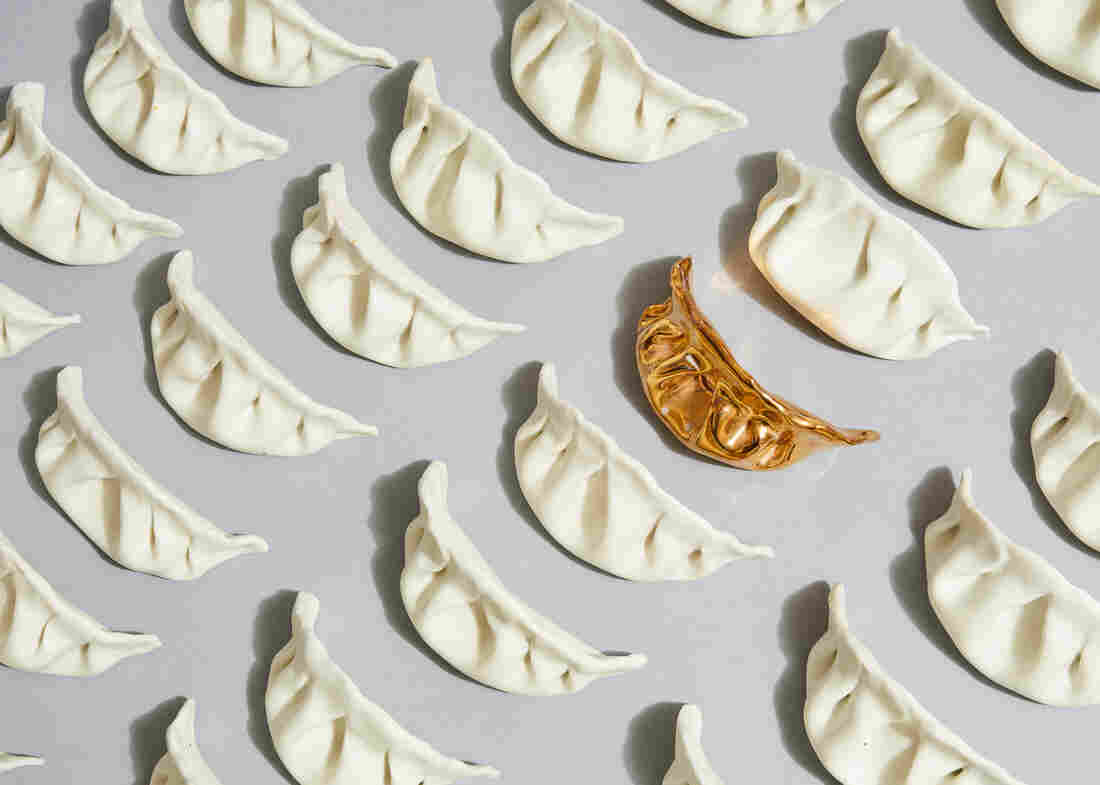 Artist Stephanie Shih remembers making pork-filled dumplings with her family and started her art project by sculpting six of them out of porcelain. She's now made 600. Courtesy of Robert Bredvad hide caption 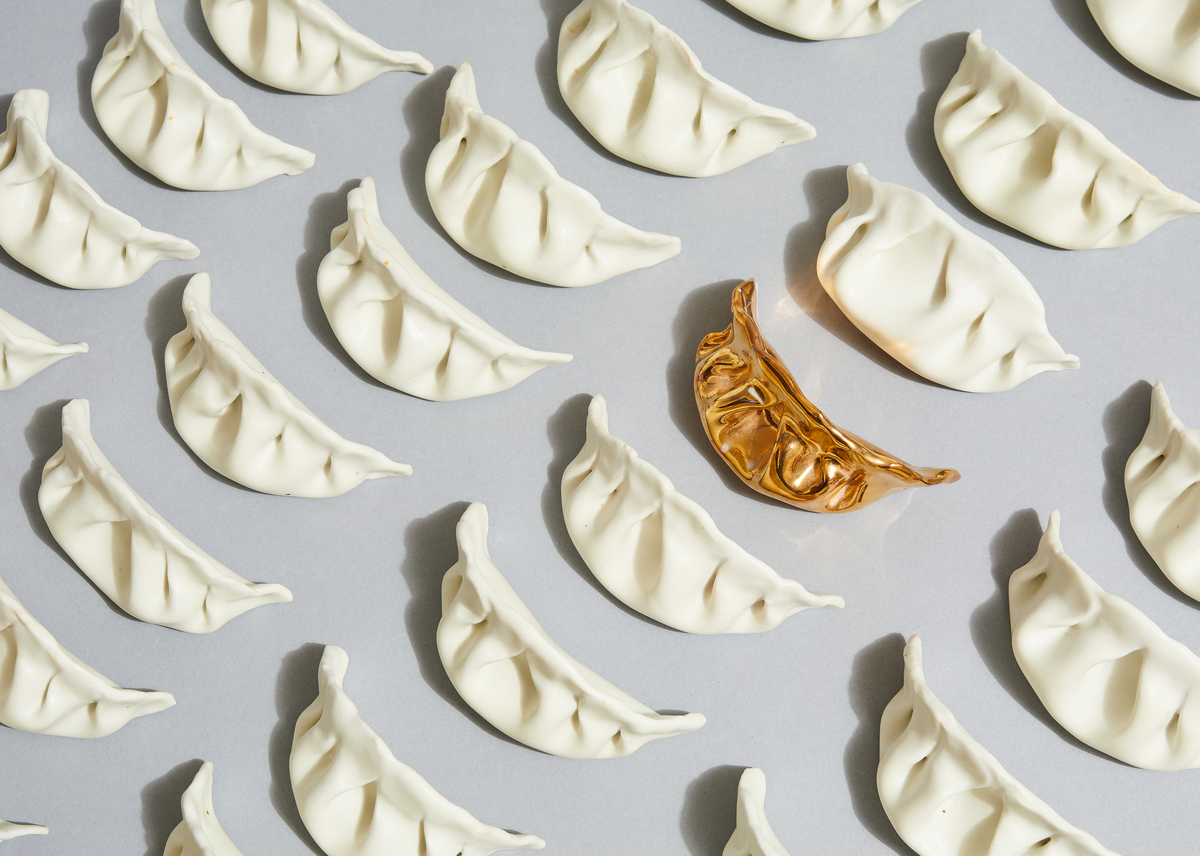 Artist Stephanie Shih remembers making pork-filled dumplings with her family and started her art project by sculpting six of them out of porcelain. She's now made 600.

Except they're not using food. They're using materials like plaster, paint and porcelain.

Remarkably, the artists don't know each other in real life, only through Instagram. But they share a common goal: to re-create the foods of their culture in sculpture to pay homage to their heritage.

Making sculptures of food isn't new to the art world, says Danielle Wu, 26, a Chinese-American writer, art critic and curator. Recently, many Asian-American artists have been continuing to use food as a means to explore race and identity.

Wu says it makes her very happy that more artists are creating works that "celebrate their identity."

"I'm thinking about my younger self and what these images might mean to someone who feels that they have been deprived of having their own culture elevated," she adds.

Stephanie Shih, a 32-year-old artist in Brooklyn, started making dumplings out of porcelain as a way to reconnect with her Taiwanese-American roots.

Growing up in Central Jersey, Shih thought "you had to be white to be cool, and that being Taiwanese was inherently uncool," she says. "I pushed my heritage to the back burner. Being [Asian] wasn't something I was proud of."

Shih remembers making pork-filled dumplings with her family. "From an early age, I could sense how important food was to them," she says.

So in July 2018, Shih started sculpting them out of porcelain. She started off making six, and says she just couldn't stop. She's now up to 600.

"I don't know why, but it was meditative for me," says Shih. "I fold them just how you make real dumplings. The only difference is that there isn't anything inside."

To her, it conjured a powerful mental image "of sitting at a table [making the dumplings] with everyone around."

Those memories are what Monyee Chau, a Seattle-based artist of Taiwanese and Chinese descent, likes about her food sculptures, too.

Chau, 22, was very close to her grandparents, she says. They had their own Chinese restaurant and she spent a lot of time with them in the kitchen.

Using plaster, she sculpted a set of her grandmother's sticky rice buns. "She would sit in the sun and make hundreds of buns wrapped in banana leaves, for hours, for multiple days, for her whole family and community," she says. "I wanted to honor her labor."

And out of ceramic, she re-created the pork belly that her grandfather used to make — her favorite dish as a child. "He used to take the wire hangers out of our closet, hook them to the pork belly, and cure them over the heat register in our kitchen," she says. Then he'd cut it up, fry it, and serve it over rice and cabbage.

"He spent a lot of time doing things like this to make me happy," she says. "I'm very, very lucky."

For Annie Shen, who goes by the name of RC, food sculpture has helped her show the world who she is as a Taiwanese-American.

In one series, made out of ceramic, she created a set of conjoined plates with two different dishes: an American one, and its Taiwanese counterpart.

Opposite a banana split, there is shaved ice. Next to a hamburger is a bao sandwich. Diagonal to a hot dog is a street snack called "small sausage in large sausage," a Taiwanese street food made with pork sausage wrapped in a sticky rice sausage.

Shih and Chau say that they've been heartened by the support they've received online, especially from Asian-Americans nostalgic for a taste of their upbringing.

"I saw right away that people loved my dumplings," says Shih.

Recently, a woman from Portland named Yumi Wilson reached out and told Shih how much her art meant to her. Wilson lost her Chinese mother 10 years ago and never learned to fold dumplings. "I never stop missing her or thinking about what's been lost," she says.

That's why Wilson finds Shih's ceramic dumplings "supremely comforting." To her, they represent the Asian-American community — the pride in their cultures and the struggle to belong.

Holding a dumpling in her hands, Wilson says she felt a magical sensation: the feeling of the ceramic "turning from cold to warm."