Accessibility links
Ancient Japanese Food Craft Brings Persimmons To American Palates : The Salt A traditional Japanese preparation of persimmons called hoshigaki is starting to trend in the U.S. thanks to social media. It turns ordinary persimmons into the Kobe beef of fruits. 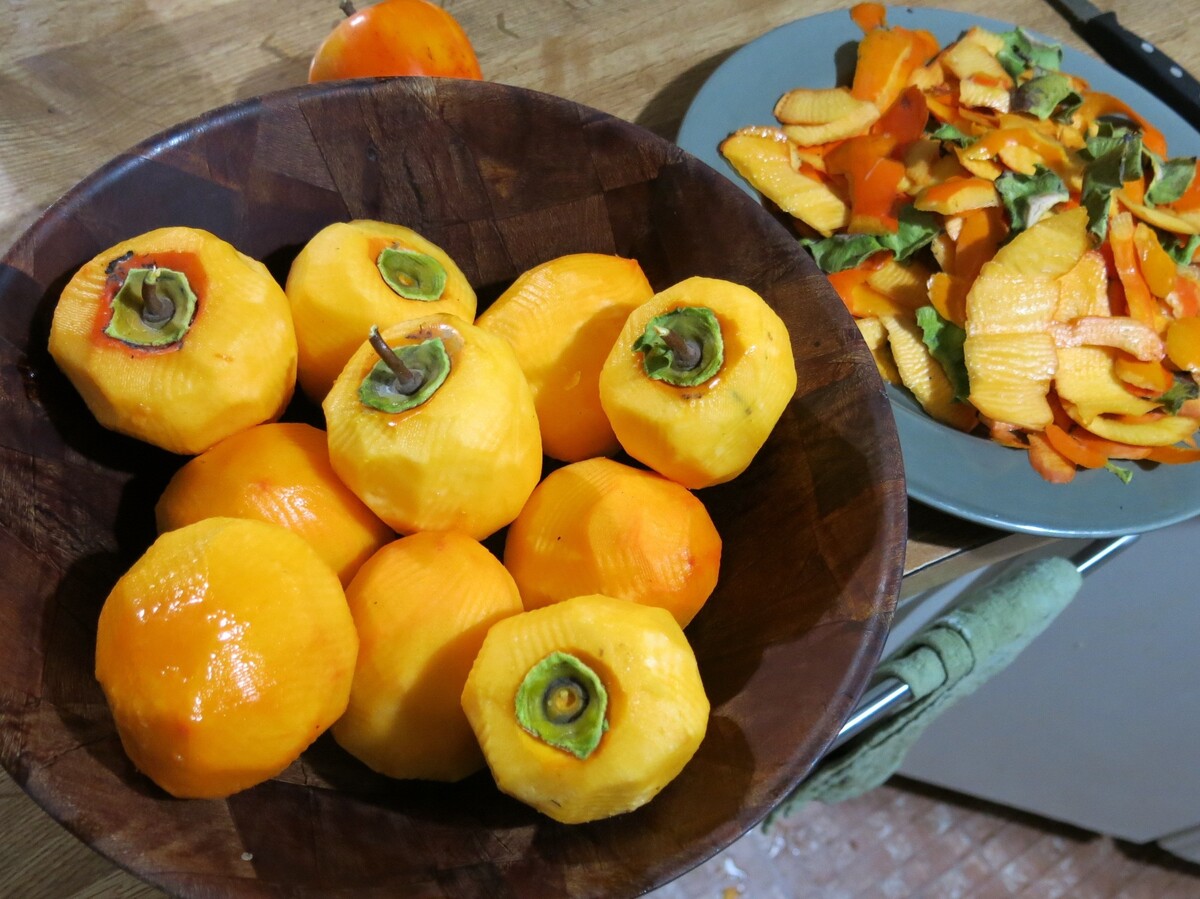 Beloved in eastern Asia, especially Japan, persimmons get little respect in the United States, where many tree owners don't bother harvesting their crop.

Each autumn, as leaves fall to the ground, persimmon trees emerge from the graying landscape, their orange and red fruits gleaming like gaudy Christmas ornaments. Beloved in eastern Asia — especially Japan — persimmons get little respect in the United States, where many tree owners don't bother harvesting their crop.

Many Americans have never tasted a persimmon. But Brock Dolman is an impassioned fan. Every fall he goes foraging for them, and the bounty is almost limitless in rural Sonoma County, Calif., where he lives.

"You can drive or ride your bike around the county, and you see these enormous trees all over with just thousands and thousands of persimmons," says Dolman, the co-founder of a permaculture center and demonstration farm in the town of Occidental.

The rise of the persimmon

There are lots of ways to eat and prepare this fruit. Many varieties, including the fuyu and suruga, are crunchy and can be eaten right off the tree like apples. Others, including the hachiya, saijo and chocolate, are considered astringent varieties. Rich in tannins, they are unpalatable until allowed to ripen to a jelly-soft texture, at which point they can be eaten out of hand or used in baking.

Several years ago, Dolman learned of a new way to prepare persimmons — a Japanese style called hoshigaki. A revered delicacy in its homeland, hoshigaki is now a rapidly trending fashion — thanks in large part to social media photo galleries and persimmons' expanding appearance on restaurant menus — in California, the East Coast and other regions with persimmon-friendly climates.

In Japanese, hoshigaki means simply "dried persimmon," yet describes a product of such labor that it has been called the Kobe beef of fruits. To make hoshigaki, producers use twine to suspend peeled persimmons — always of astringent varieties — from bamboo racks, often outdoors in the sun, other times indoors near a fan or over a warm stove. The process can take between one and two months, and every few days caretakers give regular massages to the softening persimmons, which shrivel, turn dark brown and crust over with natural sugar.

Dolman says he learned the craft both from speaking to those with firsthand experience and by watching YouTube tutorials. He has gotten the hang of the technique and recently massaged his fourth hoshigaki crop — harvested from a tree in a nearby park — toward completion. He has just a handful left of his 2017 vintage.

"I share them only with select friends who will really appreciate them," he says, adding that he often serves them with aged sheep or goat cheese.

Sonoko Sakai, a Los Angeles-based food author, spent years of her childhood in Japan, and is today one of California's hoshigaki gurus. Sakai's family was friendly with a major commercial hoshigaki producer in the Japanese city of Ogaki.

"They would send us a box each year as a gift, and there were seven of us and just eight hoshigaki in the box, so they were very special," Sakai says. The family served the fruits with tea or, sometimes, sliced them thinly and applied them as a garnish over kakinamasu — a daikon and persimmon pickle dish.

She only learned to dry her own persimmons about eight years ago, but she has eaten and appreciated them all her life. Today, she teaches hoshigaki classes. People of all ethnicities and backgrounds attend the workshops, she says, but one thing many have in common is that they are all relatively young.

"Lots of millennials," says Sakai, who is 63. "I think it's so interesting that these younger people are realizing that it's rewarding to slow down, use their hands, be patient and learn these artisanal practices from other countries."

Dangling, massaging and drying persimmons could be seen as the antithesis to what so much of Western culture now demands and expects — instantaneous gratification, ordered digitally with the push of a button. 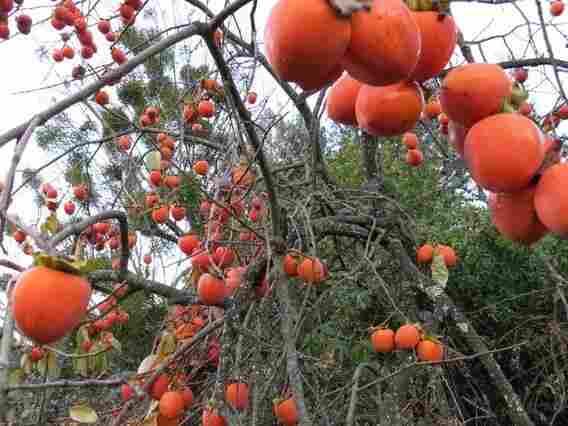 There are lots of ways to eat and prepare persimmons, but many Americans aren't sure what to do with the fruit. Alastair Bland/for NPR hide caption 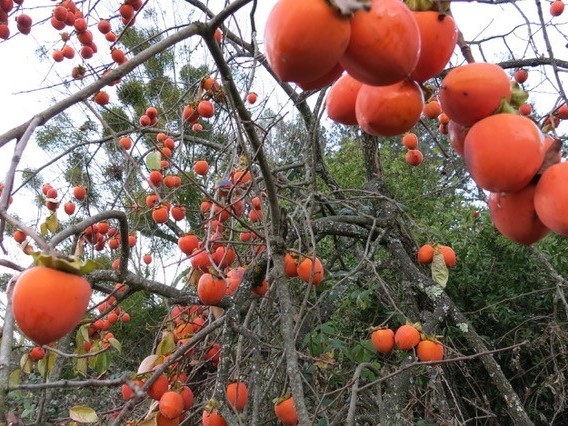 There are lots of ways to eat and prepare persimmons, but many Americans aren't sure what to do with the fruit.

"Hoshigaki is the epitome of slow food," Dolman says.

The tradition came to the United States with Japanese immigrants in the 19th and 20th centuries, and it has persisted in a relatively confined cultural circle for decades. Tosh Kuratomi, of Otow Orchard, a major persimmon farm in California, is among those who carried the torch and helped deliver the arcane knowledge of hoshigaki into the age of the Internet.

Now, as the do-it-yourself wisdom of hoshigaki circulates online, there seems to be little danger that the practice will go by the wayside, as has happened with many ancient food arts.

Sakai notes that interest seems to have surged in the past two years especially, and points out that making hoshigaki "really isn't that difficult."

"It's easier than making jam," she says.

In Bethlehem, Pa., Bassem Samaan, who owns a nursery called Trees of Joy, has grown and eaten his own persimmons for more than a decade. In 2016, he dangled and dried several dozen after learning the technique through Internet research, YouTube videos and advice from experienced friends, including a Japanese-American hoshigaki-maker.

Joel Franceschi, of Sonoma County, used to travel in Japan for work. There, he saw bright orange orbs hanging on strings outside homes in mountain villages.

"I did a little asking around and some Google searching, and I figured out what they were doing," he says.

He began making hoshigaki five years ago, mainly from fruits he acquires by knocking on strangers' doors. His very tastiest hoshigaki, Franceschi says, are those that he dunked in brandy immediately after peeling and prior to hanging.

But there are different ways to make hoshigaki, and farmer Jeffrey Rieger, owner of Penryn Orchard in California's Sierra Nevada foothills, disagrees with Franceschi's technique.

"Touching alcohol to them can ruin the process," he says.

Rieger grows several varieties of persimmons and has been making hoshigaki since 2005.

"It was a struggle to sell them at first," says Rieger, who says his persimmons, because multiple varieties are cross-pollinated, "are the sweetest in the country."

But with demand rising, Rieger says, this year he sold out his hoshigaki supply through online orders almost immediately.

A challenge for newbies

For newbies making their first hoshigaki batch, failure rates can be high. Mold can be an issue if the humidity is too high or the temperature is too low. For instance, I tried my own hand at making hoshigaki this fall from persimmons collected in and around Sebastopol, Calif. I used bamboo shoots to make a rack and twine to hang the persimmons. Though my project had the look of authenticity, the fruits did not dry rapidly enough, and as a moldy fuzz began to appear on the fruits, I rescued them from spoilage and finished them in my dehydrator. To make hoshigaki, producers use twine to suspend peeled persimmons from bamboo racks. The process can take between one and two months, and caretakers give regular massages to the softening persimmons. Alastair Bland/for NPR hide caption 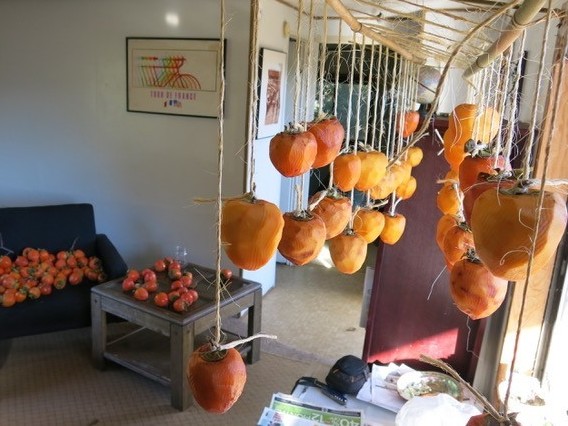 To make hoshigaki, producers use twine to suspend peeled persimmons from bamboo racks. The process can take between one and two months, and caretakers give regular massages to the softening persimmons.

But when everything works as planned, each fruit's surface turns gummy and solid, while inside the tannins break down and the fruit softens into pulp. Finished hoshigaki are dark burgundy to black in color, often with a fluffy crust of sugar on the surface.

"You're turning a fruit that's totally inedible when it's not ripe into a sweet jewel," says Sakai, whose forthcoming book, Japanese Home Cooking, will include a section on hoshigaki.

And maybe that will turn more Americans onto this unusual jewel-toned fruit.

Alastair Bland is a freelance writer based in Sebastopol, Calif., who covers food, agriculture and the environment.