Accessibility links
Nepalese Rice Farmers Boost Yields By Sowing Fewer Plants And Cutting Water : The Salt As the climate gets drier, researchers are looking again at an alternative method to grow rice — a crop that feeds millions of people — that uses less water. But support for the technique is mixed. 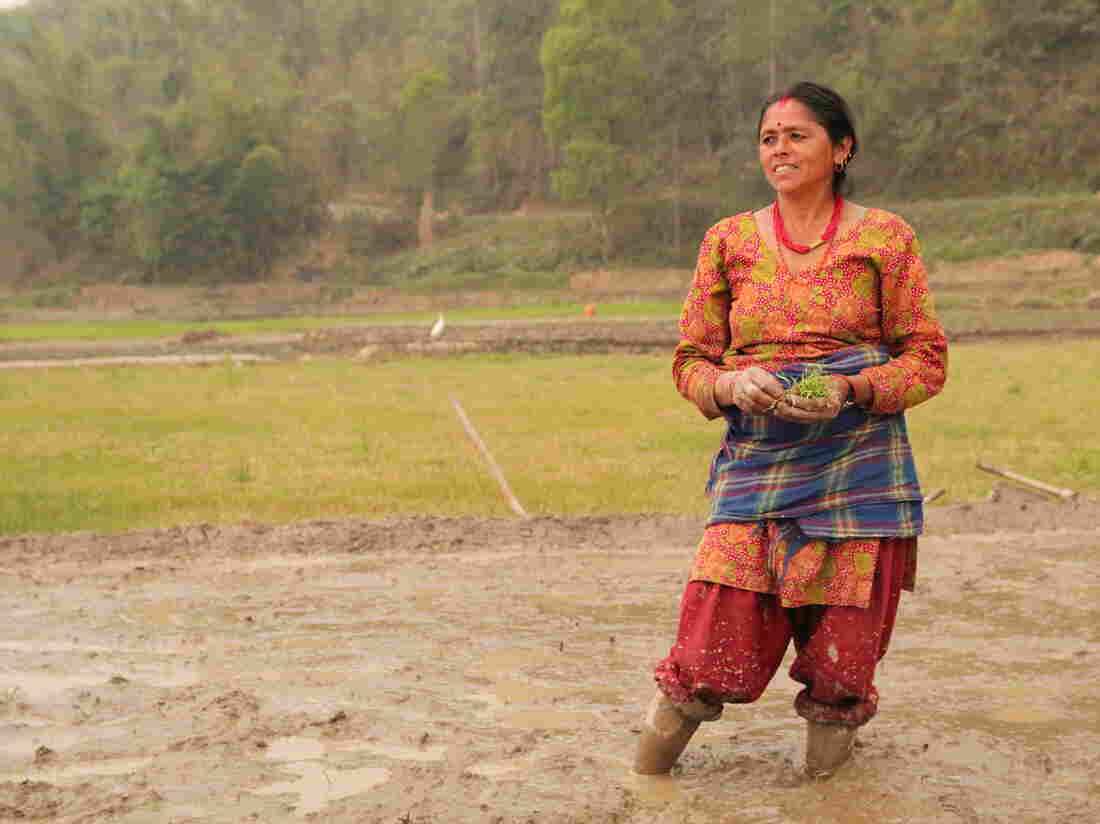 Apsara Bharati is watching over her field in Nepal, where she and her neighbors are using the system of rice intensification to plant seedlings. Danielle Preiss/NPR hide caption

Apsara Bharati is watching over her field in Nepal, where she and her neighbors are using the system of rice intensification to plant seedlings.

Apsara Bharati and her neighbors are spread across a small bit of land in Kavre, about 20 miles outside Kathmandu, Nepal's capital. The women bend to plant rice seedlings in mud up to their calves in Bharati's field.

"One by one," Bharati instructs the women, who are used to placing several plants at once. Bharati is practicing SRI, or the system of rice intensification. The technique, which was developed in Madagascar in the 1980s by French Jesuit priest Henri de Laulanié, involves several practices that seem counterintuitive to increasing production, such as planting fewer seedlings, planting them younger and using less water. But small farmers across the world have reported massive gains in yield that they attribute to the process.

Farmers using SRI in Nepal have consistently doubled their yields, according to Rajendra Uprety, a senior agriculture extension officer in southern Nepal and a pioneer of the practice in the country. This can make a huge difference for small landholders who rely on what they grow for months out of the year. Uprety says by using SRI, farmers can triple their income by growing more expensive varieties that they would otherwise eschew because of low yields. SRI also cuts water demand, which is becoming increasingly important as climate change causes worries about scarcity and food security.

Norman Uphoff, a professor of government and international agriculture at Cornell University, estimates about 20 million households around the world now use SRI, which also involves other practices, such as carefully controlling water use and applying organic fertilizers. Uphoff has been tracking its spread across the globe through the SRI International Network and Resource Center housed at Cornell. Small farmers in India supposedly shattered yield records using the practice.

But while it grows among farmers, the scientific community remains mixed. Those sensational yield records have been challenged by researchers who say they're simply not possible. "The claims that were being made were of yields that were well beyond those that have been measured by standard practices and beyond sort of the physiological maximum of the rice crop in the field," says David Johnson, the Southeast Asia representative for the International Rice Research Institute (IRRI). SRI also proves difficult to measure as its flexibility means comparisons are more difficult to draw across farms and regions.

Some of the criticism has come from Uphoff's own colleagues at Cornell, who found SRI to be no better than conventional agriculture through a review of data in 2006. Uphoff says the study used selective data, but that support for SRI is limited because there is no commercial interest from large agricultural firms that sell improved seeds and chemical fertilizers.

"The green revolution technology [of the 1950s and 60s] which had great benefits for many people requires that you buy new seeds and that you buy and use a lot of chemical fertilizer," he explains.

There might be a more pressing reason for countries like Nepal to try SRI. If you've ever seen rice paddies, you've probably seen them flooded. Rice is one of the most water-intensive crops to grow, needing about 2,500 liters per kilogram, according to the Institute of Mechanical Engineers.

"Rice is not a water-thirsty plant. But this is the tradition. That's how people plant rice," says Srijana Karki, who promotes SRI use through the U.S.-based organization World Neighbors. Karki says the excess water used in traditional rice agriculture is really to control weeds. With SRI, farmers weed more, but use less water.

This aspect of the method has piqued the interest of climate scientists like Sonali McDermid at New York University.

"I've seen estimates of about 25 percent reductions in water consumption, all the way to 50 or 60 percent reductions in water consumption," McDermid says of SRI. Standing water also causes methane emissions that contribute to climate change. As climate change causes drier conditions and less reliable weather patterns around the world, researchers are worried about the serious consequences for food security. 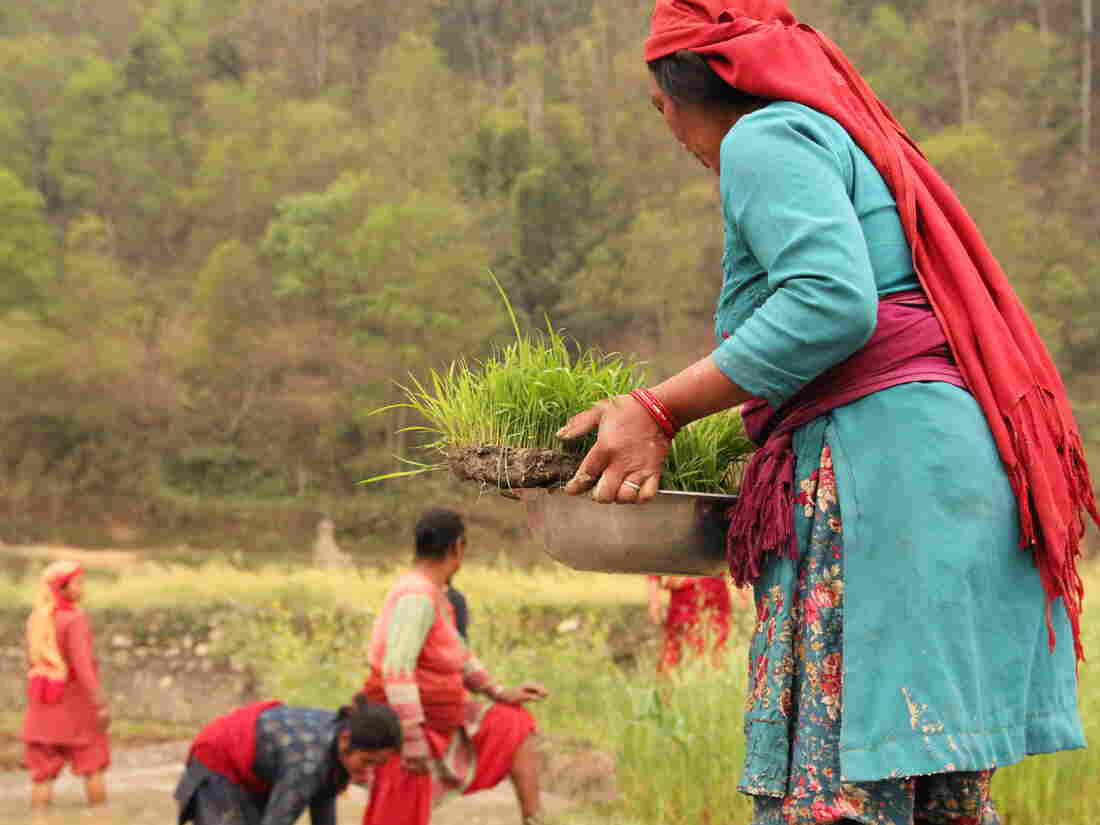 Women in Apsara Bharati's field are up to their calves in mud, using a technique that involves planting fewer seedlings but produces a higher yield. Danielle Preiss/NPR hide caption 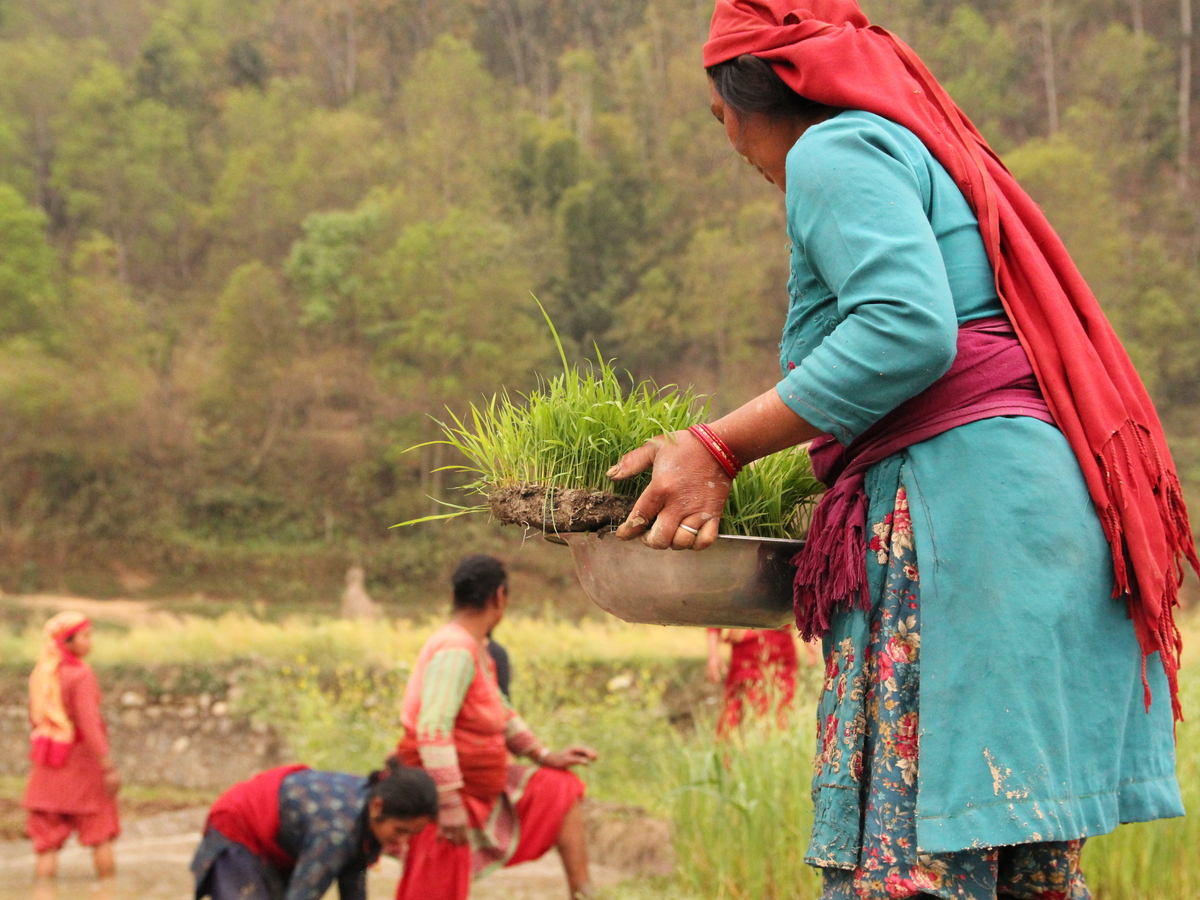 Women in Apsara Bharati's field are up to their calves in mud, using a technique that involves planting fewer seedlings but produces a higher yield.

Rice is a vital crop in Asia, where it makes up a majority of the diet of hundreds of millions of people. "Without rice, South Asia cannot think about food security. If rice production goes down it will affect the food security, it will affect the nutritional security, it will destabilize the society," says Golam Rasul, chief economist at the International Centre for Integrated Mountain Development in Kathmandu. Rasul says Nepal is especially vulnerable to the effects of climate change both because of its poverty and its geographic diversity. Temperatures increase more quickly in the high mountains, and the country's low GDP and dependence on agriculture don't allow much room for adaptation.

But Nepal is small potatoes compared to massive rice-growing countries like India, where over 20 percent of the world's rice is produced. That's why McDermid is working with researchers from Tamil Nadu Agricultural University to see whether SRI might help in the face of global water shortages. "We are very close to hitting a crisis, if not starting a crisis already, in terms of the amount of water available to sustain production," says McDermid.

Through test plots in India and Latin America, the researchers aim to isolate the parts of SRI that seem to work for poor farmers. They'll then use climate models to see how it might fare in a drier future. With longer root systems, the thinking goes, the plants should access deeper groundwater and be better able to withstand drought. McDermid is waiting for the data to say whether SRI is really a game changer, but cautions the method helps poor farmers, not those who can afford the production boost of agricultural tech like improved seeds and fertilizers.

David Johnson, from IRRI, says SRI has drawn better attention to general good crop management practices, such as weed control and use of young seedlings, and that farmers with yield gaps can certainly benefit from using the principles. But Johnson says for better adaptation, these should be combined with stress tolerant varieties of seed. IRRI has developed specific varieties for use in both Nepal and India.

Back in Kavre, Srijana Karki translates for farmer Indira Lamisal, who is noticing changes in the climate. "In earlier days rainfall was pretty predictable and regular, but nowadays there's no rainfall and it's not predictable," she says. SRI might not actually fix this; carefully controlling irrigation is an important step of the process and if rain really dries up, and small farmers like Lamisal don't have decent irrigation, the crop could suffer. These scenarios are what McDermid and her team hope to understand better. "This is where the science can help the farmers," she says.

But Karki says the hardest part is convincing farmers' families to take on the risk of SRI.

Shanti Rai, who was helping her neighbour Apsara Bharati plant, remembers seeing what looked like a barren field when she tried SRI for the first time herself. Used to seeing many plants bunched together, the few widely spaced plants didn't look like they could possibly produce enough rice to feed the family.

"I was scared and my family yelled at me, what did you plant?" she remembers. Srijana Karki (dressed in black) hands over rice seedlings for planting in Apsara Bharati's field. Karki says the hardest part is convincing farmers' families to take on the risk of SRI.

Rai's family changed their minds when they saw their production increased almost 25 percent. True to the method, the single-spaced plants produced around double the number of seeds per plant than they would have normally. This meant they grew enough to eat from their fields for eight months out of the year instead of the six they managed before. For families like theirs, this is all the evidence they need.