Accessibility links
Oregon Wineries Make Wine Out Of Grapes Rejected For Smoke Taint : The Salt After the Klondike Fire, some growers were hit with canceled orders. So wineries launched the Oregon Solidarity project, making wine with rejected grapes and paying full value for the harvest. 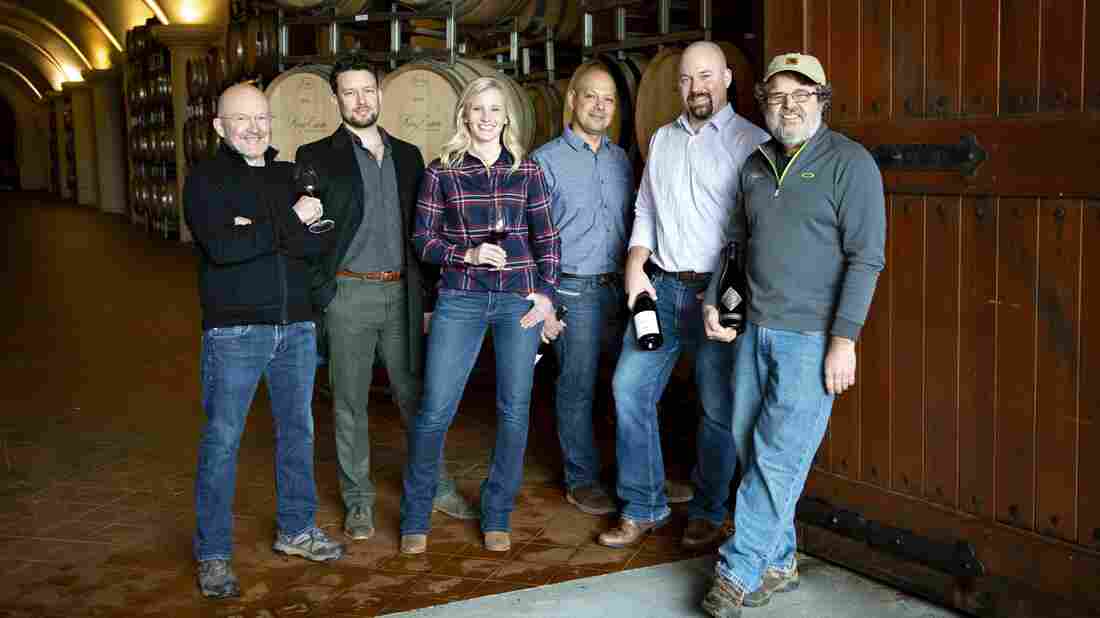 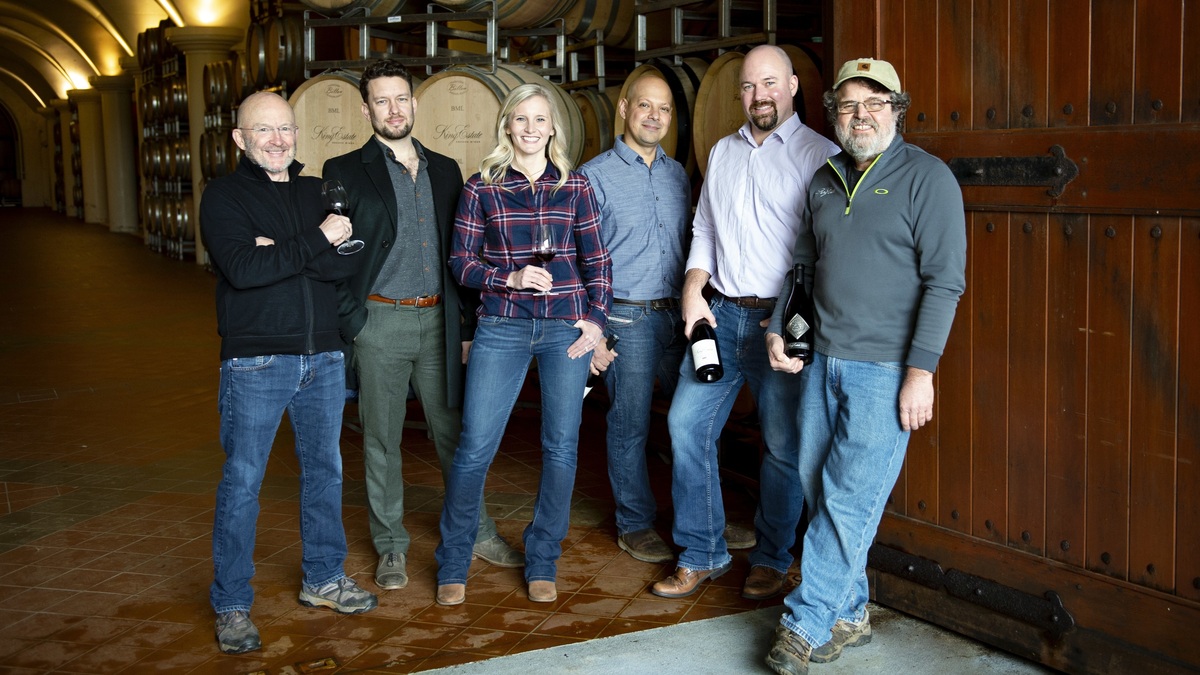 Grape growers in southern Oregon thought they had already weathered one of the biggest challenges of the 2018 season — the Klondike Fire, which burned over 175,000 acres in July.

But on Sept. 22, they faced even more devastating news: Copper Cane Wines and Provisions, a Calif.-based winery that contracts with numerous growers in the region, canceled grape orders mere days before harvest was supposed to start, citing smoke taint.

As word spread north to Willamette Valley, Ore., a few determined winemakers refused to think that something couldn't be salvaged. Like a phoenix rising from the wildfire's ashes, the Oregon Solidarity project was born. Under this new coalition label, four wineries came together to buy abandoned grapes and create three wines — a rosé, a chardonnay and a pinot noir — funneling all profits back to the growers.

After receiving the email from Copper Cane, Michael Moore of Quail Run Vineyards began calling around to his other winery accounts to see whether anyone was willing to buy extra grapes. One of those calls was to Christine Clair, winery director at Willamette Valley Vineyards.

"Already being three weeks into harvest ourselves, working around the clock, and having pretty large yields in our own winery, I wasn't superthrilled about getting the call," says Clair. "I asked him if any other people were affected. He told me 'yes,' and that he calculated over 15 growers and about 2,000 tons had been canceled. That's when I realized the severity of what was going on."

The rejected orders were financially detrimental to growers. As Moore explains, "You're not [just] losing profit. You're losing the cost of producing [grapes]." The impact also reverberated throughout the industry. "We're working the whole year, and we've got 24 people full time and 60 to 80 people at harvest," he says.

Currently, research focuses on guaiacol and 4-methylguaiacol — chemical compounds produced by fires — when assessing taint, but there are no set standards to determine what constitutes acceptable levels.

Jim Blumling, vice president of operations for Copper Cane Wines and Provisions, says the company harvested grapes from 20 growers it contracts with in southern Oregon, then did a small batch fermentation. "Once they went through the fermentation process, we taste-tested the wine and then sent it to three different laboratories to determine whether or not the grape wine had compounds that were expressing high degrees of those compounds that would impart smoke or ashtray or soot in the taste of the wine," he says. 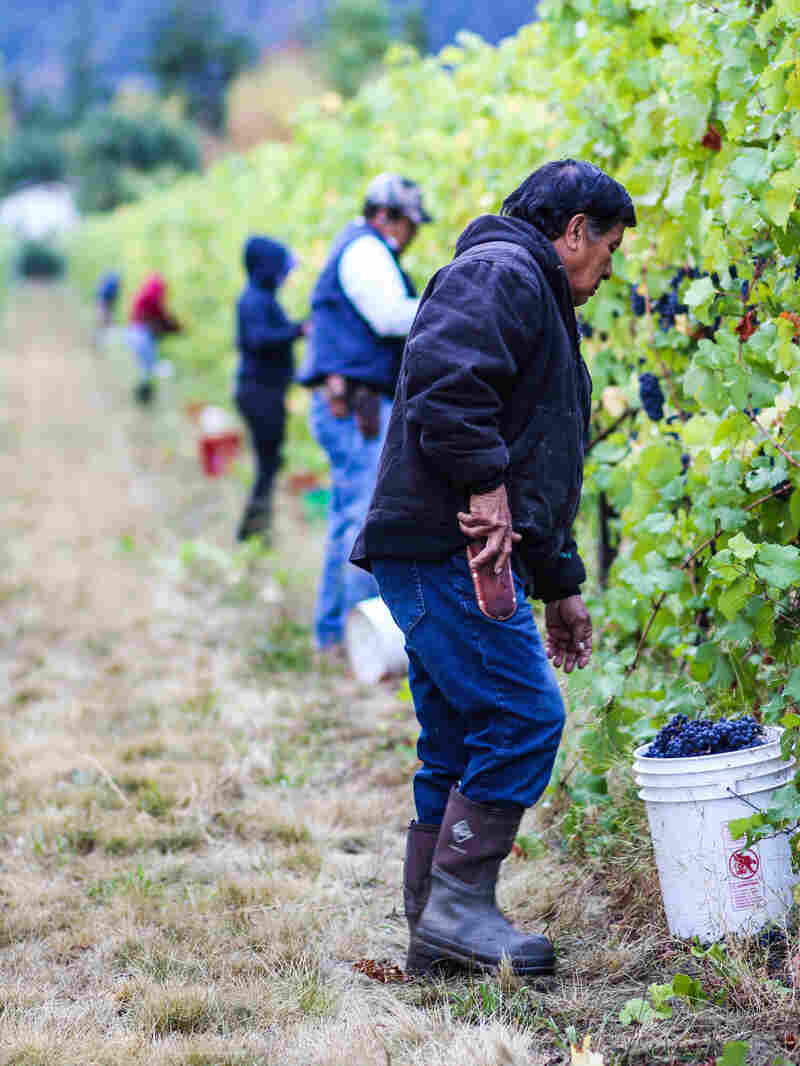 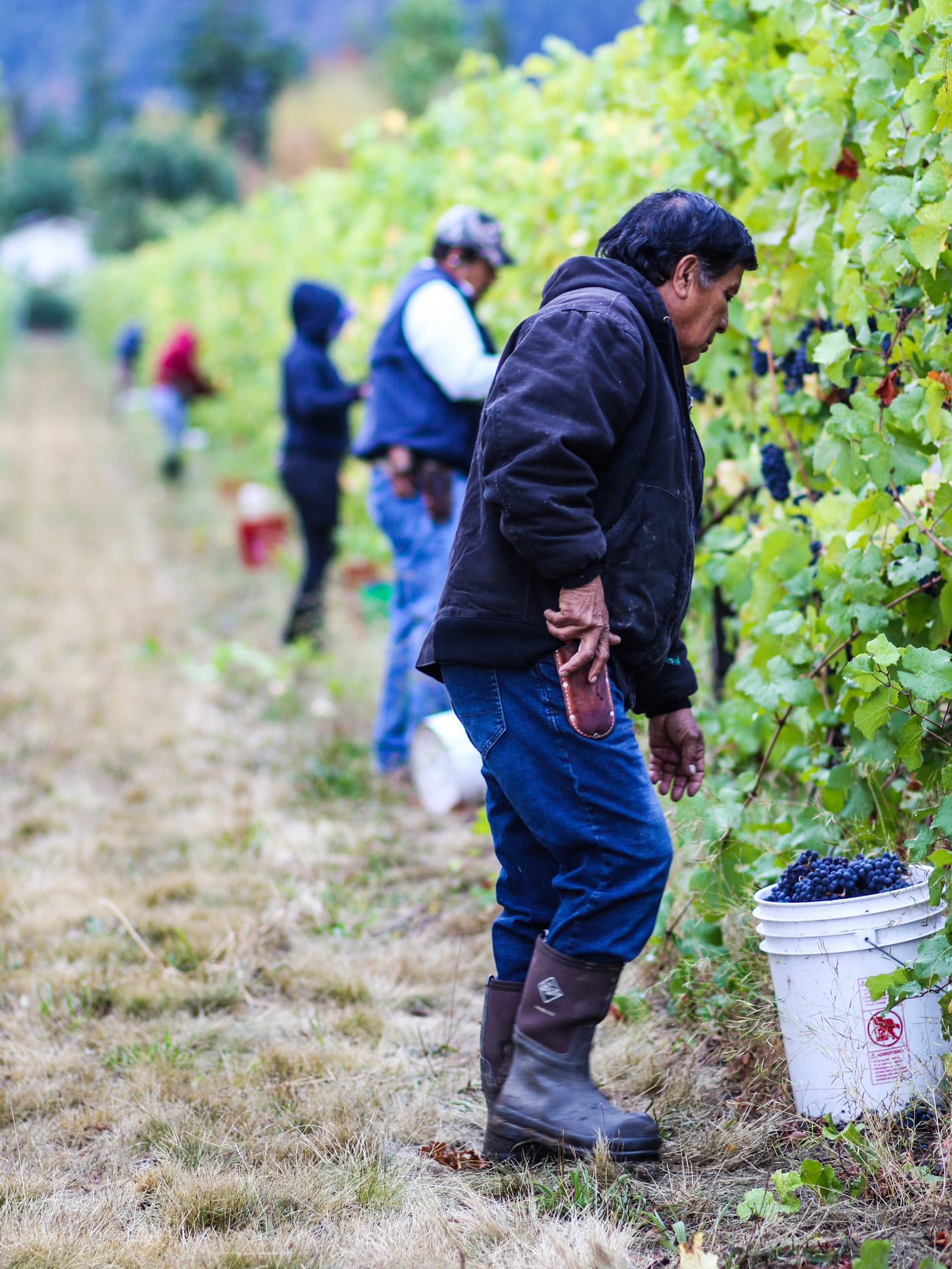 Blumling says that the company puts a lot of weight into its taste assessments. "If we felt like it was expressing too much smoke and it was incongruent with what the wine would typically taste like, yeah, that was a bit of a knockout factor."

While Copper Cane deemed grapes unusable from its tests, "I had three other buyers and they were very happy with their testing results," says Pyle. "They had been doing it regularly throughout August and into September, and they were coming up with the exact opposite conclusions [to Copper Cane's tests]. Those other three buyers are very pleased with the wines they are in the process of making."

Clair spent the weekend brainstorming solutions, originally scheming up a matchmaking service for growers and wineries, but says she "just wasn't making enough headway to really feel like it was making an impact.

Shortly after, she, along with Jim and Jan Bernau of Willamette Valley Vineyards, Oregon state Rep. David Gomberg and wine writer Jim Gullo, headed to the Rogue Valley to assess the situation. While in the car, Clair began emailing Ed and Justin King of King Estate Winery about ways they could help growers. It was during these exchanges that they came up with the idea for the Oregon Solidarity wines.

Four wineries — Willamette Valley Vineyards, King Estate Winery, The Eyrie Vineyards, and Silvan Ridge Winery — agreed to take in as much crop as the short picking time allowed and would pay growers the full value of what they harvested. Grapes would then be brought up to Willamette Valley and divided among the four estates for production.

Teams worked furiously from Oct. 4 through 12 to harvest the fruit, a very short window before grapes became overripe. The project added extra layers of work to an already frenetic time. "We made 7,500 cases of wine in a week that we were never planning on making and we did it at four wineries with four winemakers," says Clair, who served as logistics director and general head of the project. "We were all running on adrenaline, and it turned out to be one of the most rewarding things to be a part of."

What started as a partnership between wineries and growers soon saw the entire Oregon wine industry working as a unified front, from production to distribution. Carrie Wynkoop, founder of Cellar 503, an online wine club that specializes in small-production wines from all over Oregon, heard about the Oregon Solidarity project after checking in with some of her winery partners. "I called Christine Clair and asked how could I help, and we worked together to create a three-pack," she says, which is available for presale now through the Cellar 503 website.

For the Solidarity winemakers, helping growers recoup some of the potential loss just by purchasing grapes wasn't enough; all net proceeds from the sales of the wines will go to Rogue Valley Vintners, the nonprofit Oregon growers association. Clair feels the Rogue Valley Vintners is the best resource for deciding how the money should be allocated, whether it's redistributing profits to the growers, investing in a regionwide project or funding a new initiative. 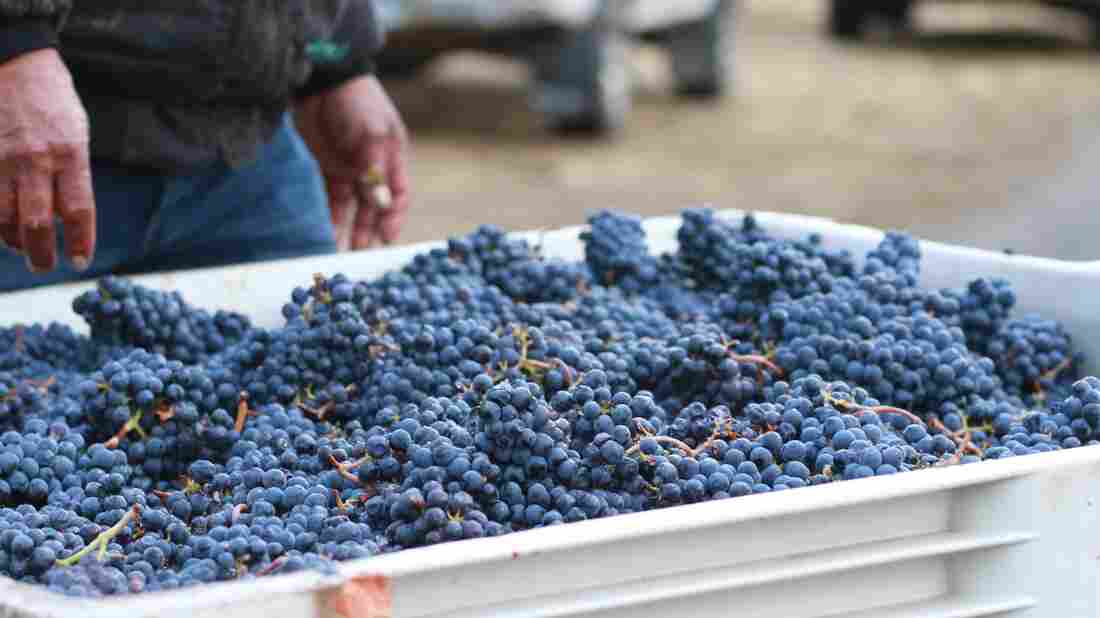 Grapes from canceled contracts were harvested and made into wine thanks to the Oregon Solidarity project. Pam Danielle for NPR hide caption 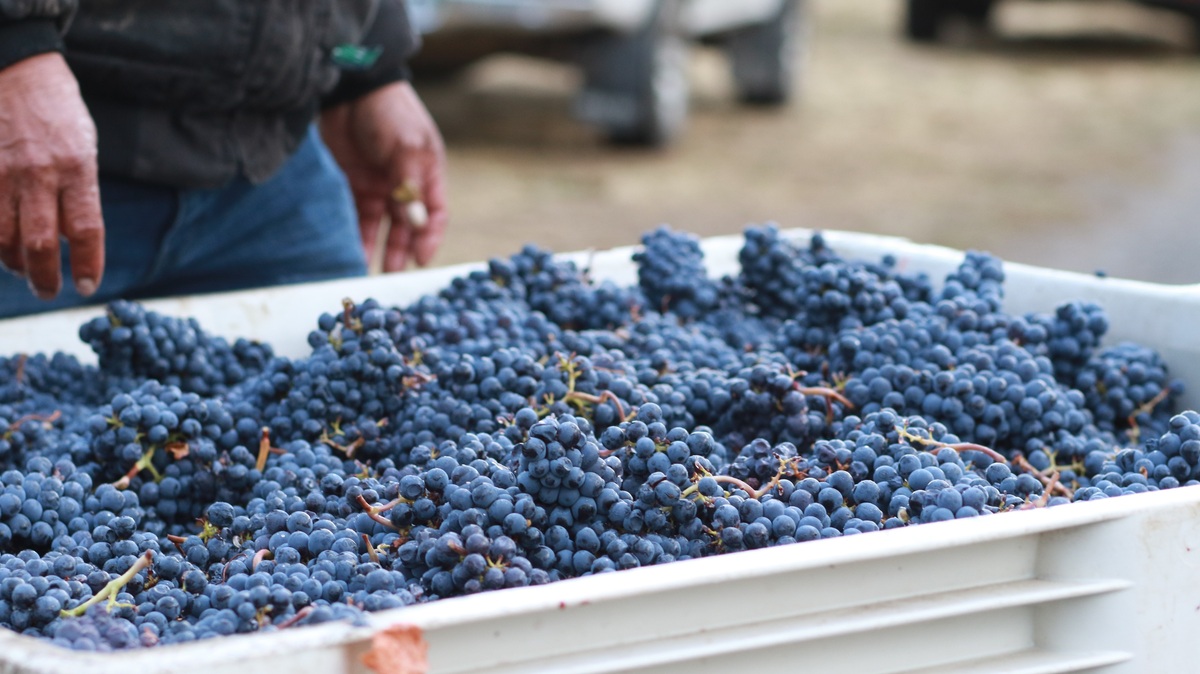 Grapes from canceled contracts were harvested and made into wine thanks to the Oregon Solidarity project.

The coalition's work has also taken members outside of the winery. "We've been working on matching [growers] up with some low-interest operating loans through the United States Department of Agriculture," says Clair. Outreach to the governor of Oregon resulted in the creation of a task force that will look at both short- and long-term financial assistance for growers as well.

While Clair says there currently aren't any concrete future plans for the label, she says there is a willingness among partners to keep it going. Their mission has touched a nerve in the industry.

Although Blumling explained Copper Cane's reasoning for canceling orders, "We support the effort," he says. "All we know is from the testing and sensory is they wouldn't meet our standards, but at the end of the day, we want the growers to thrive and prosper."

For the four wineries, the project created another kind of union. "Typically, you're not making wine with your colleagues and people you would normally consider your competitors," says Clair. "We realized, what a cool opportunity to do this together."

Shana Clarke is a freelance wine, sake and cocktail journalist who regularly contributes to Wine Enthusiast, HuffPost and Hemisphere, and is the wine editor for inside.com. Follow her on Twitter and Instagram at @ShanaSpeaksWine and see more of her work on www.shanaspeakswine.com.