Accessibility links
Cooking And Evolution: Did Softer Foods Give Us The F-Word? : The Salt Some linguists are arguing that the advent of softer food thousands of years ago led to changes in biting patterns and, eventually, to more frequent use of sounds like "f" and "v" in human languages.

Did Cooking Really Give Us The F-Word?

Did Cooking Really Give Us The F-Word? A biomechanical model of producing an "f" sound with an overbite (left) compared with an edge-to-edge bite (right). Some linguists are arguing that the advent of softer food thousands of years ago led to changes in biting patterns and, eventually, to more frequent use of sounds like "f" and "v" in human languages. Scott Moisik hide caption 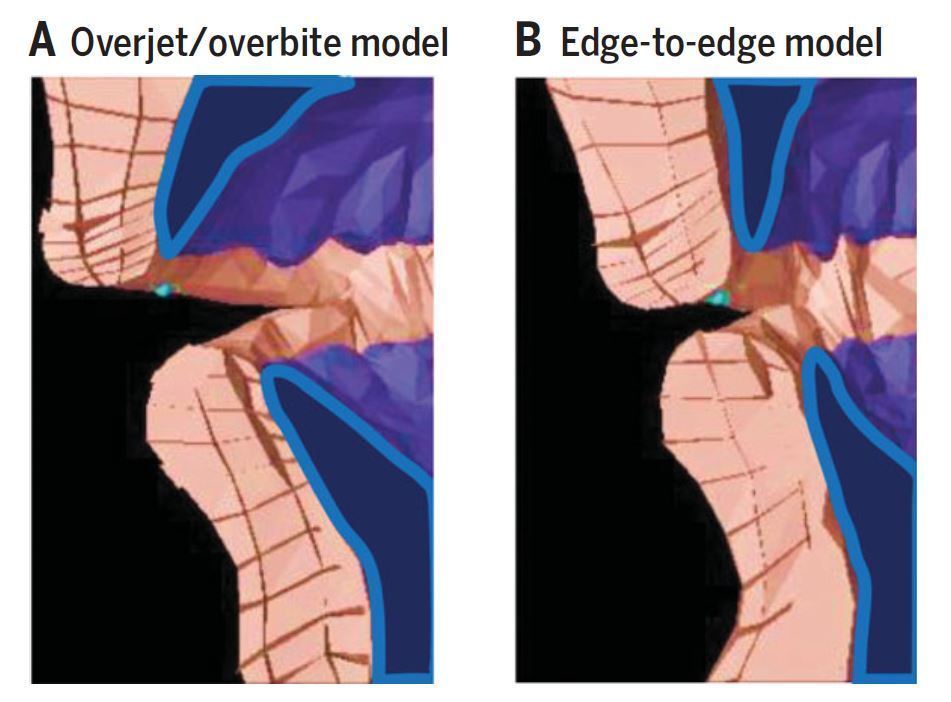 A biomechanical model of producing an "f" sound with an overbite (left) compared with an edge-to-edge bite (right). Some linguists are arguing that the advent of softer food thousands of years ago led to changes in biting patterns and, eventually, to more frequent use of sounds like "f" and "v" in human languages.

Processed foods get blamed for a lot of things. But this week, a group of linguists took it to a whole new level.

To put it crudely, they argue that the invention of processed foods like yogurt and gruel thousands of years ago gave us the F-word. Lots of F-words. To be more precise, the researchers think that softer foods led to more frequent use of the sounds "f" and "v" in human languages. (Other experts on language are skeptical; more about that later.)

According to the new theory, food influenced language through a complex chain of events.

First came agriculture and early forms of food processing like fermentation, which delivered meals that were easier to chew. No longer were humans relying so heavily on tough meats, roots and berries. And as a result, newly pampered humans ended up with a different kind of bite. Their teeth were no longer worn down so much, and they maintained more of the natural overbite that they were born with, with teeth of the top jaw overlapping the bottom teeth.

This physical arrangement of teeth, in turn, made it easier for people to make "labiodental fricative" sounds like "f" and "v," which require the top teeth to press against the bottom lip.

"This change in bite paved the way for labiodentals in the spoken languages," says Damián Blasi, a linguist at the University of Zurich. He spoke during a teleconference with reporters organized by the journal Science, which published the new research.

According to Blasi, humans with an overbite were more likely, purely by accident, to make "f" and "v" sounds. Then the normal processes of language evolution took over. These slips of the tongue sometimes caught on and became a standard part of human languages. "That doesn't mean that labiodentals will emerge within all languages," says Steven Moran, another linguist at the University of Zurich involved in the research. "It does mean that the probability of producing labiodentals increases slightly over time."

The scientists have been assembling evidence for their theory over the past five years. It wasn't easy. "The biggest obstacle was, simply put, that linguistic behavior does not fossilize," Blasi says. There are no audio recordings of conversations in the kitchens of ancient Mesopotamia.

They did, however, find evidence to support each step in their hypothesized chain of events. There's evidence, for instance, that hunter-gatherers did lose their overbite. Computer simulations of the human jaw indicate that it takes more muscle effort to make the "f" and "v" sounds if you don't have that overbite, so it stands to reason that hunter-gathers wouldn't be inclined to make those sounds.

The researchers examined the evolution of the Indo-European family of languages. Generations of linguists have attempted to reconstruct ancient versions of these languages, and indeed, "we found that, for these groups of languages, it is very likely that the labiodentals emerged not much before the Bronze Age, in parallel to [the] development of new food processing techniques," Blasi says.

The linguists also found that labiodental sounds are less common in the languages of contemporary hunter-gatherer communities in Greenland, southern Africa and Australia. Where the sounds exist, they sometimes are found mainly in words borrowed from other languages.

Putting it all together, the researchers are confident in their theory, and they think that this study of "f" and "v" sounds could shift the entire field of linguistics.

According to Balthasar Bickel of the University of Zurich, another co-author of the study, language usually is considered a purely cultural phenomenon. "If you think about it, however, this is a bit strange," he says. "We produce it with our bodies. Mostly with our mouths but, like in the case of sign language, also with our hands and other gestures." It stands to reason, he says, that biology influences language.

Other linguists are intrigued but less convinced. "I think the individual pieces seem reasonable," says Alan Yu, a linguist at the University of Chicago. But the entire story strikes him as speculative. "There are just a few too many gaps for me to think that this is a genuine connection" between dietary changes and language, he says. The researchers didn't look at languages of hunter-gatherers of the Americas, he says, some of whom use labiodental sounds that didn't come from European languages.

Salikoko Mufwene, also at the University of Chicago, expressed his own doubts. He wrote in an email to NPR that human language had been flourishing for thousands of years before the advent of farming and softer foods, "so it's surprising that people would have waited until so late before producing labio-dental fricatives."

Anthropologist Shara Bailey at New York University, on the other hand, found the new study thought provoking. "I like it!" she says. "It's making me think about something I hadn't thought about."

Bailey's research focuses on the development of the human jaw and teeth. "I can actually have my students go and maybe test some of these hypotheses by looking at fossil hominids or looking at hunter-gatherers. When you inspire other people to follow up and conduct their own experiments, I think that's a good thing!"