Accessibility links
How Some In Beef Industry Are Bucking Antibiotics Use : The Salt Most beef cattle receive antibiotics in their feed to prevent liver abscesses while eating a high-energy diet. There's growing pressure on feedlots to stop this — and some have. But it's costly. 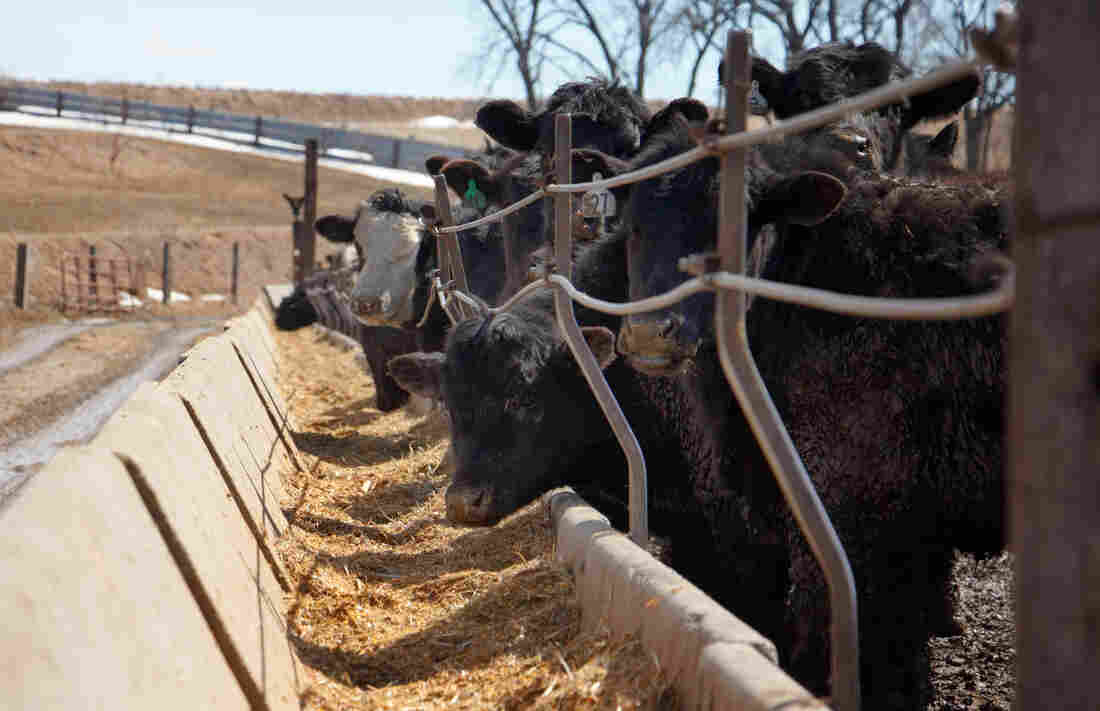 Cattle eating a mixture of antibiotic-free corn and hay at Corrin Farms, near Neola, Iowa. Their meat is sold by Niman Ranch. Dan Charles/NPR hide caption 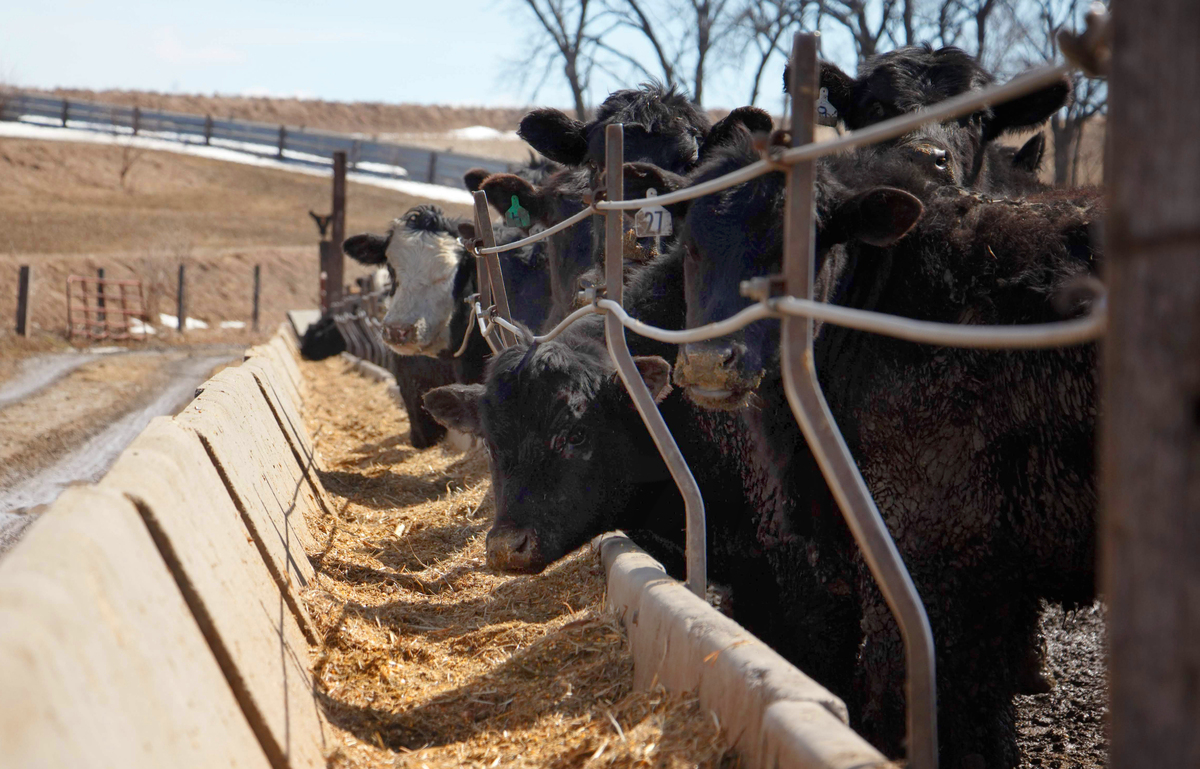 Cattle eating a mixture of antibiotic-free corn and hay at Corrin Farms, near Neola, Iowa. Their meat is sold by Niman Ranch.

If you ate a hamburger today, or a high-priced steak, chances are it came from an animal that was fed an antibiotic during the last few months of its life.

This is one of the most controversial uses of antibiotics in the entire food industry. There's growing pressure on the beef industry to stop doing this.

I wanted to know how hard that would be. My questions eventually led me to Phelps County Feeders, a cattle feedlot near Kearney, Neb.

It was cold and wet on the day I visited. The weather had been bad for weeks. Joe Klute, the feedlot's co-owner, was unhappy because he knew his 15,000 cattle were miserable, too. And miserable cattle don't gain weight.

"I mean, you spend all this time and energy and effort and money to put weight on them that you hope to get paid [for], and now it's all going to be gone," he said. "Because of the weather stress."

We head out to look at the raw ingredients of beef-making: giant bales of hay; piles of chopped up, fermented corn stalks and leaves called silage; steaming, flattened kernels of corn. "They get corn flakes for breakfast, just like we do," he says with a grin. 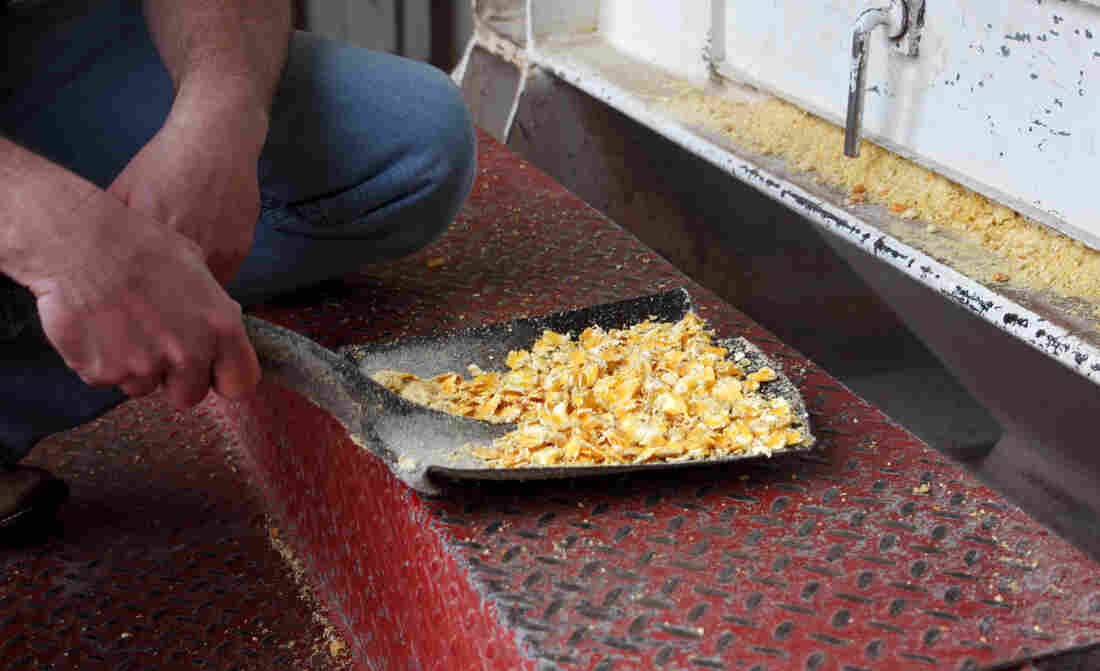 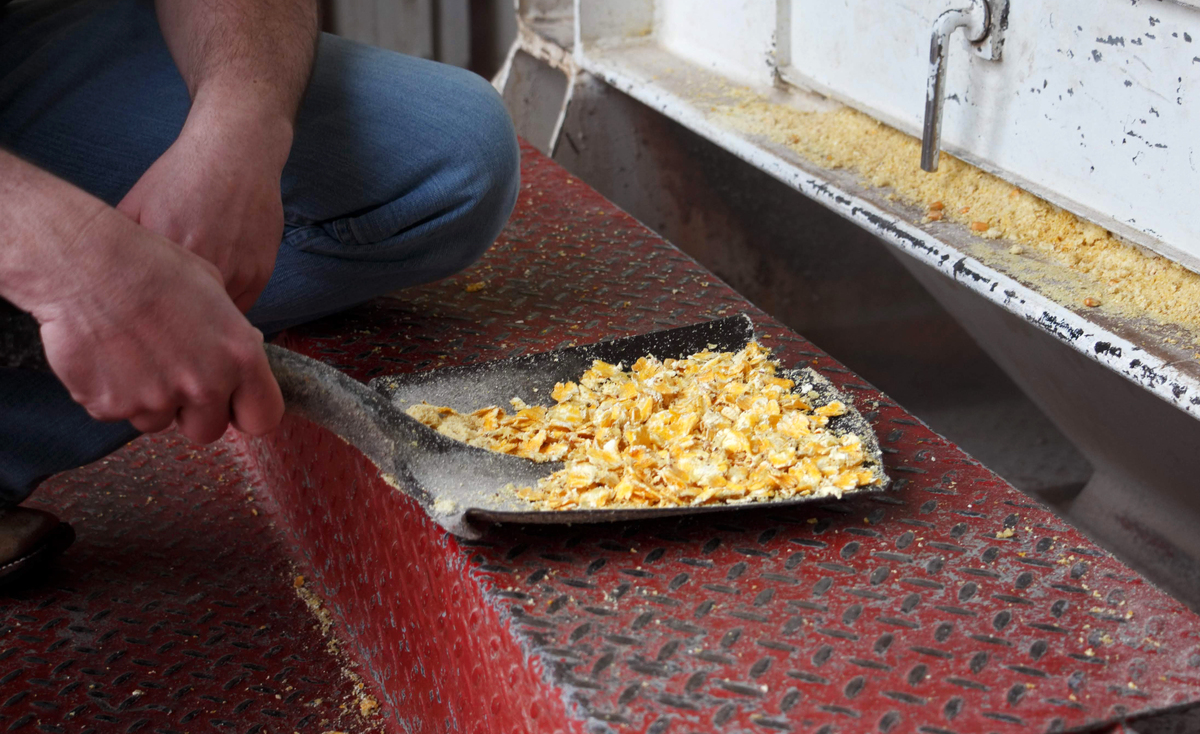 Steamed, flattened corn is fed to cattle to make them gain weight quickly. This diet can also lead to liver abscesses.

And then there are the micro-ingredients, like vitamins. They get dissolved in water and mixed into the truckloads of corn and hay. "On a 20,000-pound load, those micro-ingredients are going to be less than a pound," Klute says.

One of these micro-ingredients is an antibiotic called tylosin. It's in there because when cattle eat a high-calorie diet, with lots of grain — which they do in feedlots, to fatten them up quickly during the last four to six months of their life — many will develop abscesses on the liver.

T. G. Nagaraja, at Kansas State University, has spent most of his life studying this process. Fermenting grain produces acid in the bovine stomach that's called the rumen, Nagaraja explains. When there's lots of it, the acids can damage the rumen wall. This lets bacteria escape into the bloodstream and travel to the liver, where they get trapped, multiply, and cause abscesses.

Nagaraja says that when cattle are fed a standard feedlot diet, 20 percent or more of them typically develop liver abscesses. Tylosin cuts that percentage by more than half, to single digits.

This is, of course, great for the feedlot, but according to Lance Price, director of the Antibiotic Resistance Action Center at George Washington University in Washington, D.C., it's not good at all for the rest of us. 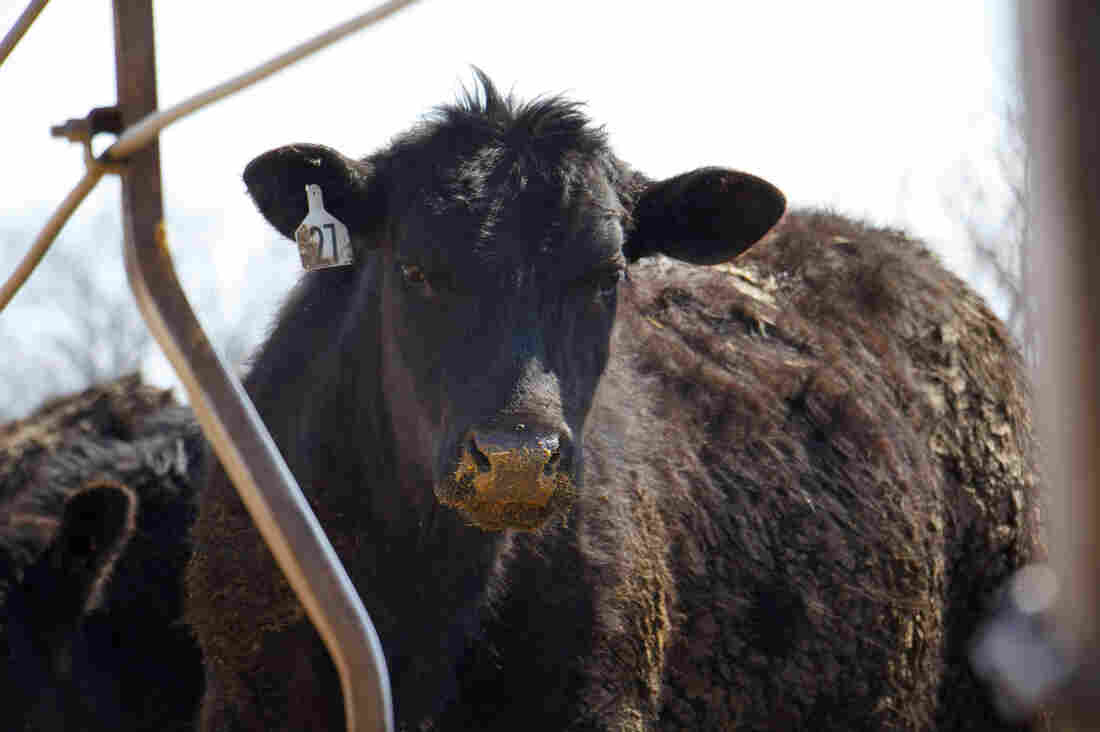 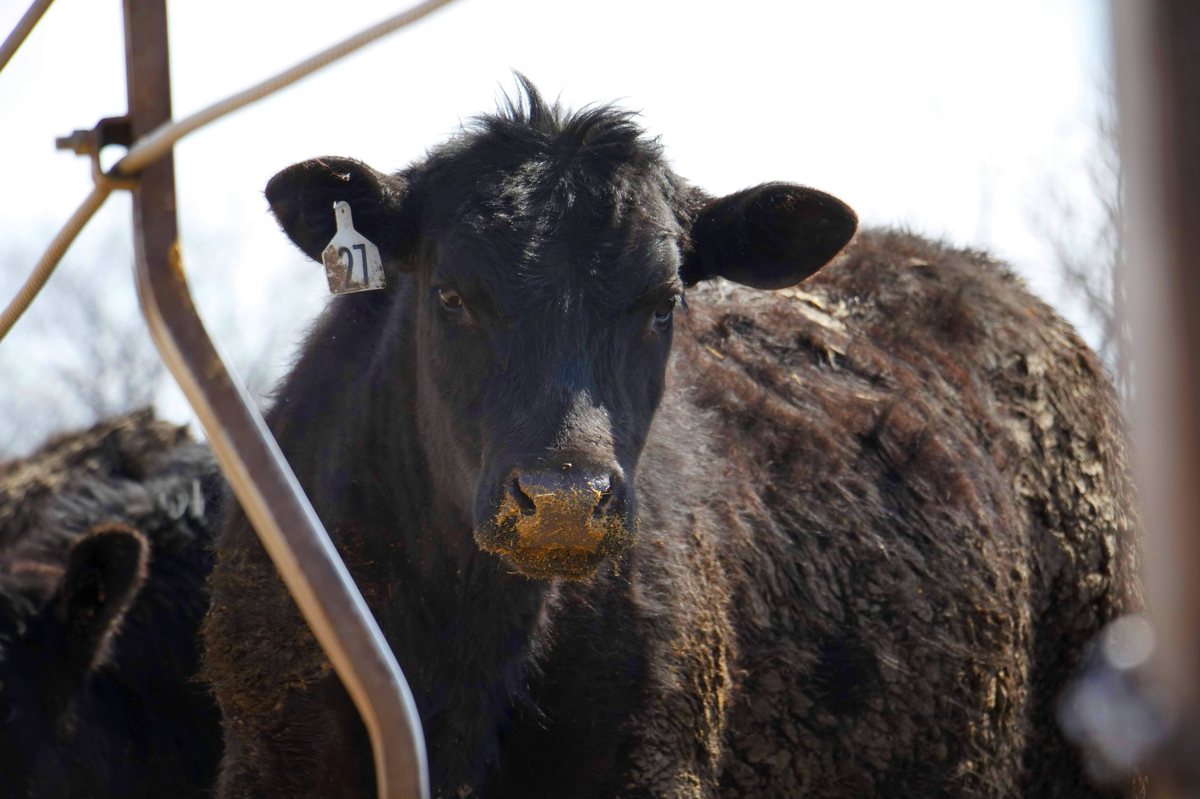 "It's basically a public health decision that they're making," he says, and it's a bad one, undermining the effectiveness of drugs that people depend on.

Tylosin, for instance, is almost the same as an antibiotic that doctors often prescribe, called erythromycin. So when you feed tylosin to cattle, Price says, "it puts pressure on all the bacteria in and on that animal. Those bacteria respond to the antibiotic and eventually become resistant to it."

Those antibiotic-resistant bacteria can migrate away from the feedlot, perhaps carried by animal waste. If the bacteria then infect people, they can't be treated with erythromycin.

The Food and Drug Administration has banned some uses of antibiotics in animals for exactly this reason. Farmers can no longer use antibiotics to make cattle grow faster. Overall, their use of these drugs is down. But farmers still can give antibiotics to treat or prevent diseases like liver abscesses.

This gets Lance Price kind of angry. "We are creating this disease," he says. "We are creating liver abscesses by the way we're raising [cattle]." Raise them differently, he says, and cattle wouldn't need tylosin.

In fact, it's being done. It's even being done at Phelps County Feeders. About 40 percent of the cattle at Joe Klute's cold, wet feedlot are not getting any tylosin, or any growth-promoting hormones. This beef gets sold as an "all-natural" product under the company's own brand: Nebraska Star Beef. The feedlot gets more money for it.

"We decided, hey, it's another avenue of survival. It's another niche. Let's find this niche; let's try to be different," Klute says.


I also visited another, much smaller, feedlot in Iowa that's completely antibiotic-free. It grows cattle for the company Niman Ranch.

In both places, they're doing it pretty much the same way.

"We change how the animals are fed, and we don't have to use tylosin," says John Tarpoff, vice president of beef for Niman Ranch.

They feed these cattle more hay and silage — and less energy-rich corn. This diet is easier on the animals' stomachs. "The idea is, you have to protect the whole digestive system," Tarpoff says. 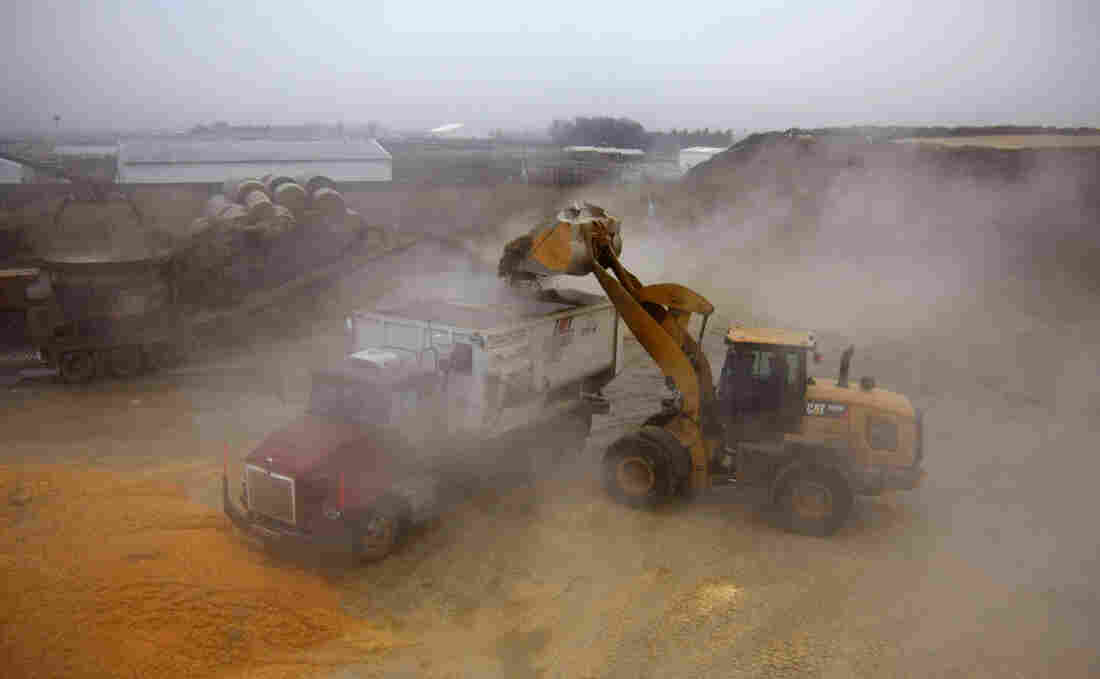 At Phelps County Feeders, trucks are loaded with hay, rolled corn kernels, corn silage, and dried distillers grains. The proportion varies, depending on which cattle are getting that feed. Dan Charles/NPR hide caption 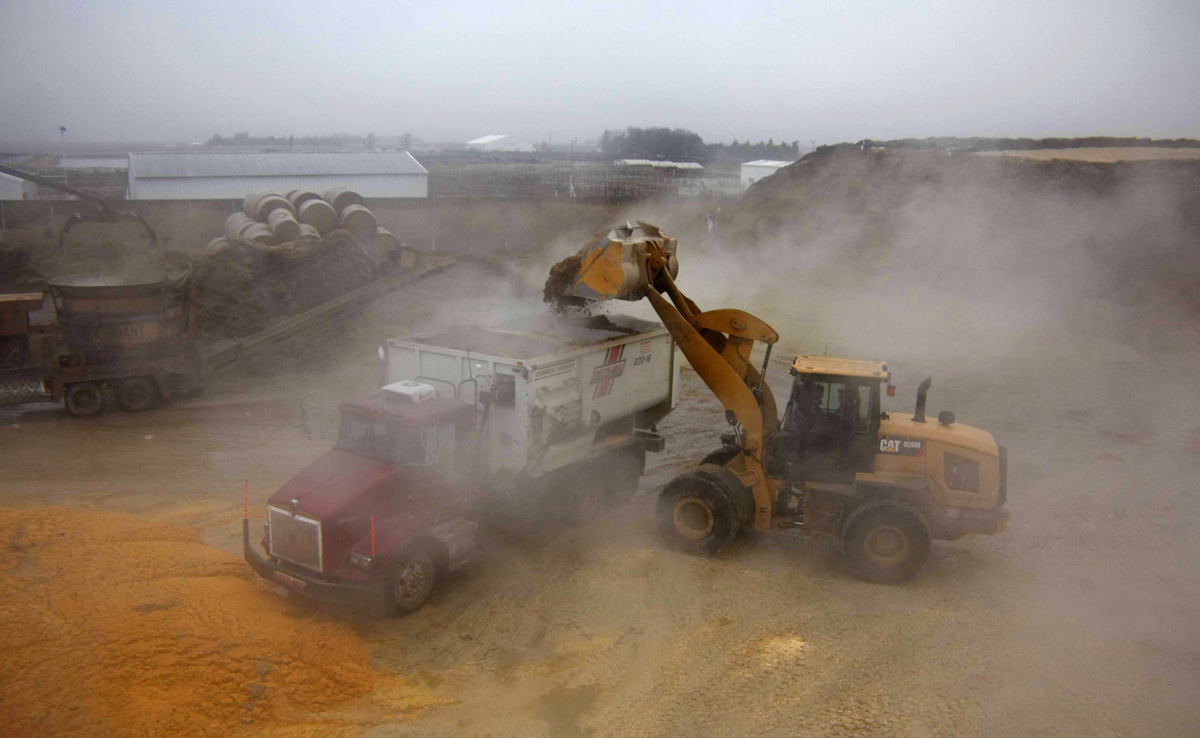 At Phelps County Feeders, trucks are loaded with hay, rolled corn kernels, corn silage, and dried distillers grains. The proportion varies, depending on which cattle are getting that feed.

But there's a trade-off. The animals grow more slowly when their diet is less energy-rich. To gain the same amount of weight, it can take these cattle about five months — as opposed to four months with conventional feeding. And some cattle — less than 10 percent of them — develop liver abscesses under this feeding regimen, too. That's about the same as in feedlots that use a high-energy diet combined with tylosin.

Another fly in the antibiotic-free ointment: Occasionally, cattle get sick with other diseases and need antibiotics. In that case, they're treated and their meat is no longer sold as "natural." Tarpoff says this happens to fewer than 1 percent of Niman Ranch's cattle. At Phelps County Feeders, it's between 5 and 10 percent.

In case you're wondering, these antibiotic-free cattle still are getting plenty of grain in their diet. That's necessary, Tarpoff says, to produce the tender steaks that many consumers prefer.

Because of the longer time and extra feed required to raise cattle this way, it costs more. Tarpoff estimates that it's roughly 15 to 18 percent more. "We get the complaint all the time, 'Gee, your product costs more than the other guy's,' " he says. "Well, yeah, it does."

Some big customers are willing to pay for antibiotic-free production. They include Whole Foods and the fast-food chain Shake Shack.

Last December, in perhaps the biggest shift in the industry away from antibiotics, McDonald's announced that it's taking steps to cut antibiotic use by its beef suppliers.

I asked Tarpoff for his reaction. He sounded cautious.

"It's not so easily done," he said. This industry, at least the mass-market part of it, has always been driven to cut costs. Cutting out the antibiotics will raise costs. "It'll be interesting to see what happens," he says.