Accessibility links
Kernza: Can This Breakfast Cereal Help Save The Planet? : The Salt Some environmentalists say food production needs a fundamental reboot, with crops that stay rooted in the soil for years, like Kernza, a prairie grass. Even General Mills says it likes the idea. 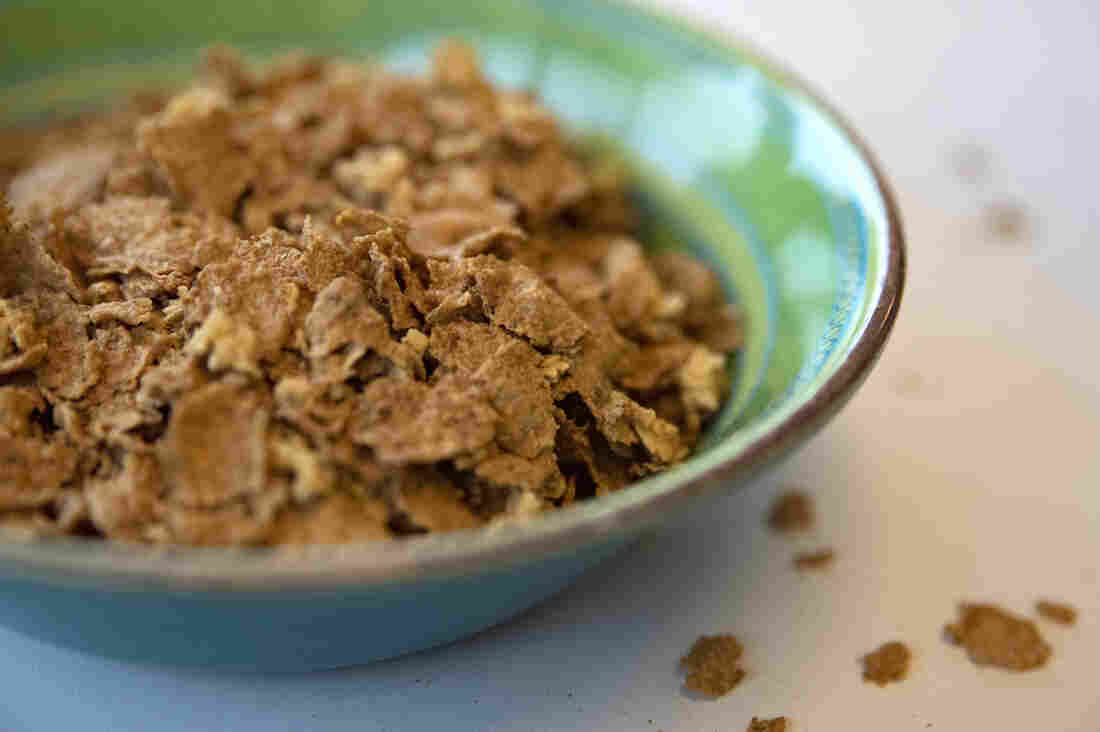 A bowl of Honey Toasted Kernza. General Mills made 6,000 boxes of the cereal and is passing them out to spread the word about perennial grains. Olivia Sun/NPR hide caption 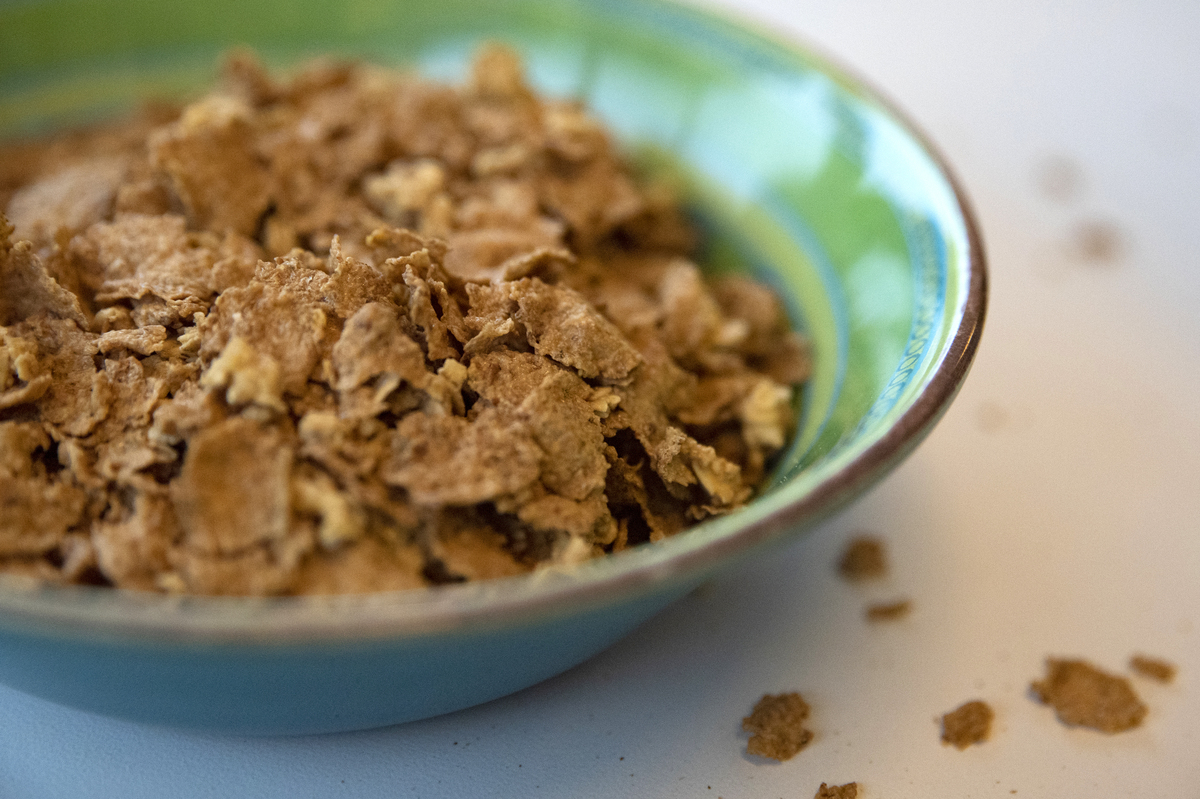 A bowl of Honey Toasted Kernza. General Mills made 6,000 boxes of the cereal and is passing them out to spread the word about perennial grains.

This past week in San Francisco, food writers and environmentalists gathered to taste some breakfast cereal.

This particular cereal had an ingredient — the milled seeds of a little-known plant called Kernza — that's the result of a radical campaign to reinvent agriculture and reverse an environmentally disastrous choice made by our distant ancestors.

The campaign began 40-some years ago with a scientist-environmentalist named Wes Jackson. He argued that humanity took a wrong turn, thousands of years ago, when it came to rely on crops like wheat and rice for basic sustenance. These "annual" crops need replanting each year, "which means that if you're going to get your seed to germinate, you've got to destroy the vegetation at the surface," clearing away anything that might compete with the fragile seedlings, Jackson said.

As farmers use tillage tools or herbicides to get rid of competing vegetation, they inevitably wipe away habitat for birds and insects. Bare soil washes away and pollutes streams and rivers. Tilling the soil releases vast amounts of carbon dioxide into the atmosphere.

Jackson imagined a totally different style of farming. And he founded a small organization called The Land Institute, in Salina, Kan., to pursue the dream.

Tim Crews, the institute's director of research, takes me on a little tour of the grounds at The Land Institute, and our first stop is a patch of native prairie. Crews gesture toward the carpet of grass, wildflowers and clover. "This is the vegetation that actually builds soil. It's what created the rich soils that feed us, across the breadbasket of the Midwest," he says.

These plants don't require reseeding. Their roots go deep into the earth, live right through the winter, and send up fresh green stems every spring.

Plant breeder Lee DeHaan in a greenhouse at the Land Institute in Salina, Kan. These plants were created by cross-pollinating intermediate wheatgrass and regular wheat. Dan Charles/NPR hide caption

The first is Kernza. The plant's real name is intermediate wheatgrass, but that struck people as kind of clunky, so they renamed it. It's a distant relative of regular wheat. It's never been grown as a grain crop because it doesn't produce nearly as much seed as wheat. But it is a perennial.

For the past 15 years, plant breeder Lee DeHaan has been cross-pollinating individual Kernza plants. He grows them in greenhouses and in open fields and selects the best offspring, paying particular attention to the size of the seeds they make. Bigger seeds means a bigger harvest to mill into flour.

He opens a paper bag to show me some recent results. "As you can see, the seed is pretty small. It's about one-fifth the size of wheat," he says.

But he has been making progress. These seeds are twice as large as when the project started. The Land Institute has recruited farmers to grow Kernza in small fields (small for the Midwest, at least) of 40 acres or so. They're harvesting it with standard farm machinery.

DeHaan recalls the day, years ago, when he realized that Kernza might be more than a long-term scientific experiment. He was visiting a farmer who'd grown a field of Kernza. The farmer had just finished his wheat harvest, and DeHaan asked if he'd be willing to try to harvest the Kernza field with his combine. "He was kind of skeptical, but he was willing to give it a shot," DeHaan recalls. "I'm riding with him in the combine, and it's starting to fill up his bin in the back. He was almost giddy; he was starting to giggle about it. He couldn't believe it was working." They ended up with almost a full semitrailer load of Kernza grain.

Even more remarkable: General Mills, the company that makes Cheerios and Wheaties, now says it wants to make cereal out of it. 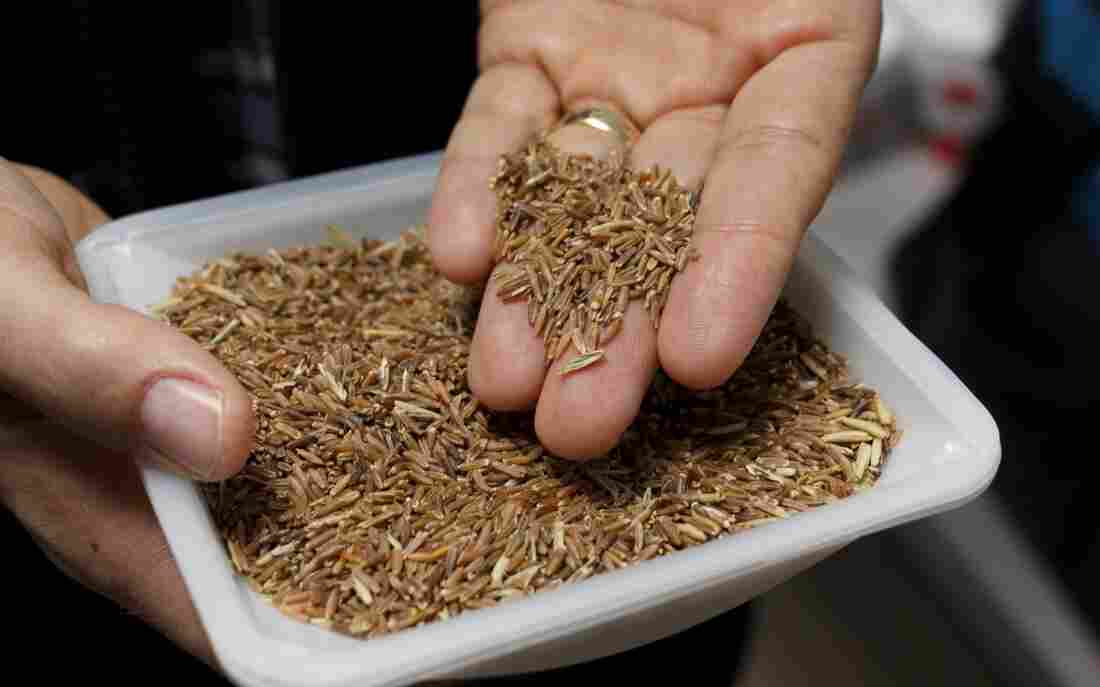 Grain from intermediate wheatgrass, or Kernza. The Land Institute is recruiting farmers to grow larger quantities of the grain for General Mills. Dan Charles/NPR hide caption 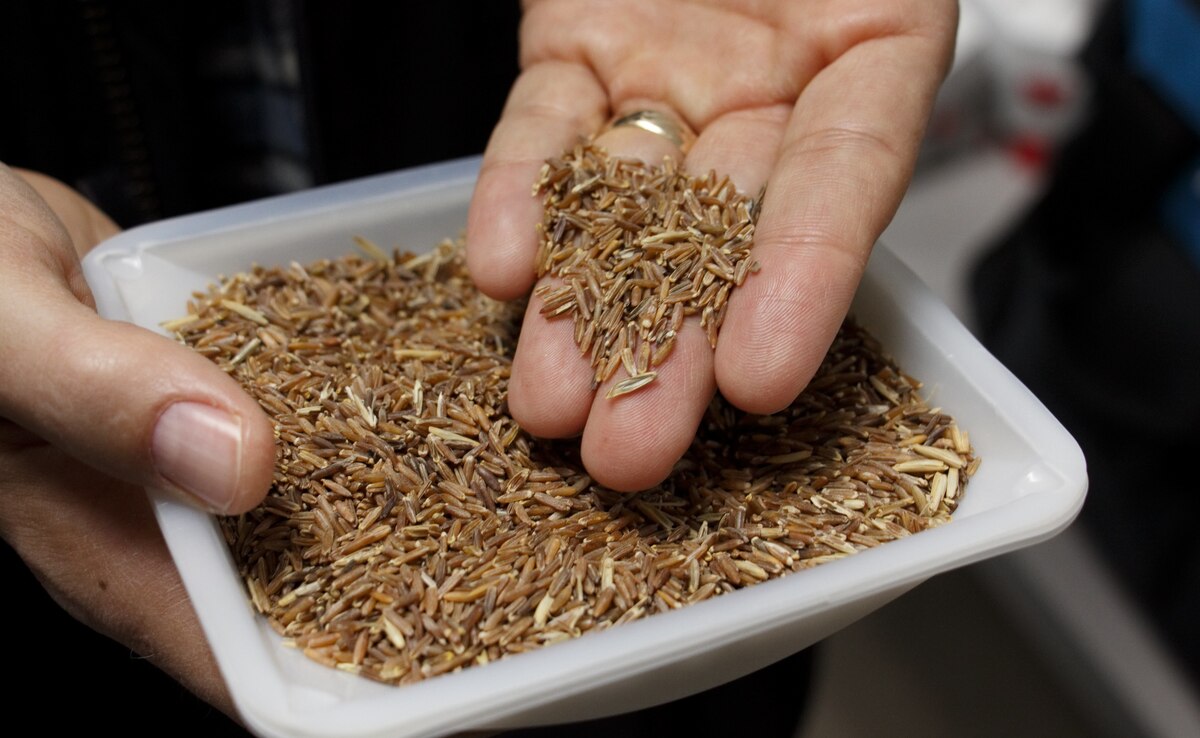 Grain from intermediate wheatgrass, or Kernza. The Land Institute is recruiting farmers to grow larger quantities of the grain for General Mills.

"I think the R&D team saw this lovely grain and thought, 'There is something we can do with it,' " says Maria Carolina Comings, marketing director for General Mills' organic brand, Cascadian Farm.

In recent months, General Mills gathered up all the Kernza grain that it could find, milled it, and made 6,000 small boxes of cereal to hand out as samples — and at events like the one this week in San Francisco.

There's actually more regular wheat in this cereal than Kernza, and it looks and tastes kind of like Wheaties. It's pretty sweet.

But General Mills wants to market Kernza — eventually, when there's more of it available — as the first grain that grows like grass on the prairie, protecting the soil, taking carbon from the air and storing it in the earth.

"We want to scale this and be able to find it on any grocery store, sitting on the same shelves" alongside every other cereal put out by General Mills' Cascadian Farm brand, Comings says. "You can start to be part of the solution to climate change by eating a cereal, which is just so lovely."

The Land Institute is recruiting farmers to grow larger quantities of Kernza, but they're telling people not to expect too much, too soon. "Commercial production of Kernza in 2019 is akin to taking a car for a test drive when it's halfway down the assembly line," says Fred Iutzi, the institute's president. For one thing, Kernza produces small harvests right now — perhaps 500 pounds per acre. By comparison, the average U.S. field of wheat yields about 4,000 pounds per acre.

But long-term, the Land Institute also has grand ambitions. "Our goal is not for it to be a small-scale, niche thing," says Lee DeHaan. "We have landscape-scale problems," and to make a real impact, perennial grains need to cover the landscape.