Accessibility links
'Debatable' List Of '100 Most Jewish' Foods Leaves Plenty Of Room For Kibbitzing : The Salt As families around the country fill their freezers with matzo balls and gefilte fish in preparation for the coming Passover Seder, a new book asks: What does it mean for a food to be Jewish? 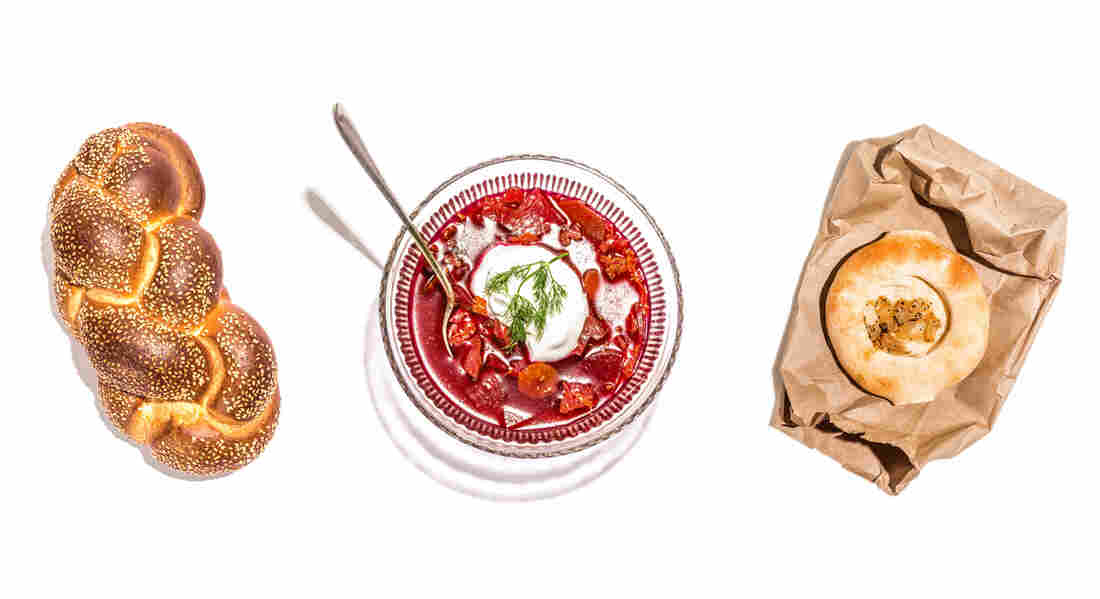 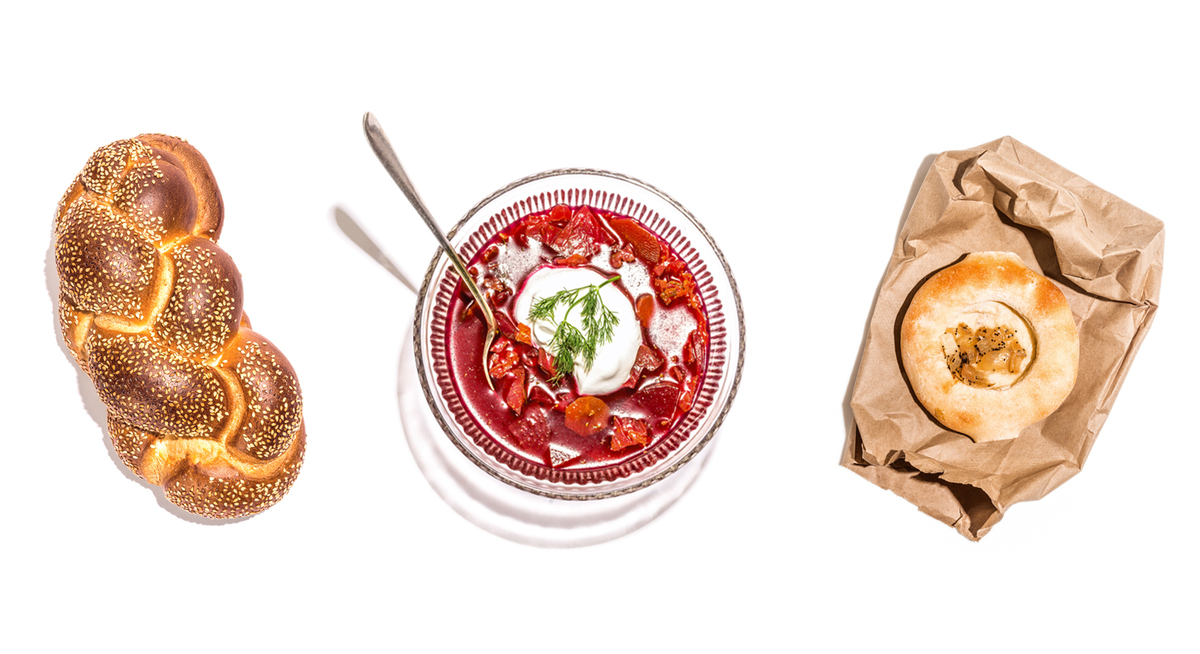 Challah, borscht and a bialy are among the items listed in The 100 Most Jewish Foods.

It's hard to talk about Jewish culture without talking about food. The bagels, the brisket, the babka. Oh, the babka.

Ask anyone who is spending this weekend filling their freezer with matzo balls for the upcoming Passover Seder, and they'll tell you that food is intertwined with Jewish culture and history — to the point,where it can become a theology in and of itself, the stage on which all sorts of Jewish values are performed. It's not surprising to learn that the code of Jewish law is called the Shulchan Aruch — the set table. And that the commentary on the book is the Mappah — the tablecloth. But that said, what exactly does it mean for a food to be Jewish?

Alana Newhouse, editor of Tablet Magazine, the online journal which brands itself as a new read on Jewish life, attempts to answer this question (or operate from the place of having answered it) with a newly published book, The 100 Most Jewish Foods: A Highly Debatable List. In a series of short essays, contributors wax on about dishes from Mitteleuropa to the Middle East, probing through lines of history and sentiment (and making a collective case as to why the latter may be more important than the former).

From the outset (well, actually from the subtitle), Newhouse acknowledges this is loaded territory.

"This is not a list of today's most popular Jewish foods, or someone's idea of the tastiest, or even the most enduring," Newhouse lays out in the introduction. "What's here, instead, are the foods that contain the deepest Jewish significance — the ones that, throughout the history of our people (however you date it), have been most profoundly inspired by the rhythms of the Jewish calendar and the contingencies of the Jewish experience."

Significance and profound inspiration can of course be in the eye (or stomach) of the beholder. But the list is admirable. Sure, we could quibble with some of the choices (say, omitting Crisco's fine Jewish history). But the book details what are clearly the greatest hits: the deli stalwarts, the Israeli favorites, the convenience foods that targeted the kosher market and became ingrained in diaspora tradition. Or, as Newhouse puts it, "the salty, the sweet, the dense, the light, the beautiful, and the undeniably brown, stretching back over thousands of years of civilization and from nearly every region of the planet."

But for those looking for a full picture of the histories and resonances of the particular foods that made the list — well, they may be somewhat disappointed.

This book grew out of an online project, and often it shows. Like a lot of quick turnaround writing of the Internet age, many pieces in this book are lightly sourced, and some more about clever constructions (that, say, some of the top bagel joints aren't run by Jews) than deeper-level history and fact (many of them still are, also: *Talmudic shrug*). 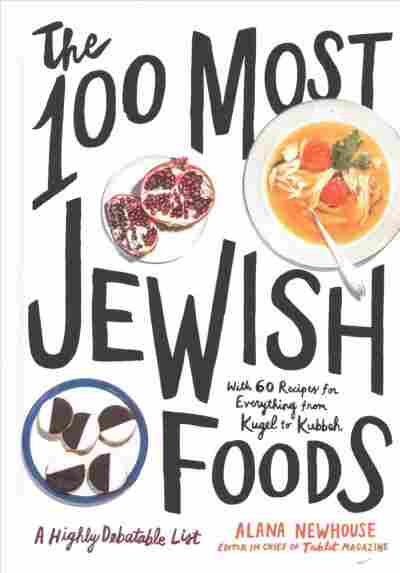 The 100 Most Jewish Foods

Zac Posen's article on borscht simply tells you that it is pink, and he developed a recipe for it, and life has sweet and sour moments. (Lea Zeltserman thankfully comes in with a beautiful meditation on how this food, which defines Russian-Jewish cuisine, actually fits into the stories and tables of those Jews who lived through the Soviet era). And fine fish chef Eric Ripert weighs in on gefilte fish, just to ultimately tell you that it is ... not that bad?

More troubling are the entries that not only sidestep the rich stories of how particular foods became "Jewish," but consciously disregard these histories in a deliberate attempt to nationalize them. Writer Liel Leibovitz urges readers to "Forget the heated arguments about [hummus'] true national origins," because all you need to know is that it's the official dip of the NFL. And his entry for shakshuka shrugs, "So what if the Moroccans make it, too. Never mind that the Tunisians eat it for breakfast each weekend, or that it delights the Greeks and satiates the Algerians: Shakshuka is Israeli now." These are clearly attempts to be cheeky (humor being a fine Jewish value), but the glib gloss on appropriation can be difficult to stomach. As is editor Alana Newhouse's essay joking that terrible store-bought cookies served at temple are more of a threat to American Judaism than the BDS movement calling for an economic boycott to force Israel to recognize Palestinian statehood.

That said, there are some beautiful meditations on food and family and feeling within these pages. Barbara Kirshenblatt-Gimblett writes an homage to everything that could be made from the whole chickens her mother and grandmother would get from the kosher butcher. The feet ended up enriching soup (after careful cleaning and prepping); the neck bones would add flavor and bits of meat to the broth; the neck skin would be stuffed with filling and sewn up with white cotton thread. The bird itself would be roasted to golden-crisp perfection, while the eyerlekh, the unhatched chicken eggs found inside freshly slaughtered chickens, would be floated in soup. (Because of salmonella-testing regulations, they aren't easily found anymore.)

There are stories of beloved grandmothers, of the wealth of Yiddish words for dill, and of the surprising role of sugar cereals in Orthodox homes. (They're a Sabbath morning treat, when religious prohibitions on work mean adherents can't cook the usual hot breakfast.) Leah Koenig (who provides context and commentary throughout the book) explains how after the destruction of the temple, religious rites were transferred to the Sabbath table, making breads like challah akin to a divine offering. And MaNishtana reflects on the special resonances of a Seder meal — and the mortar of charoset in particular — for African American Jews, for whom the legacy of slavery is lived on a daily basis.

There are also the personal recollections that are downright hilarious — like Josh Malina's story of his grandmother's gribenes (chicken skin cracklings), and his own adoption thereof. ("For an elegant vegetarian version, simply don't eat anything at all.") And Wayne Hoffman serves up a pitch-perfect ode to the (shared) used tea bag on his parents' kitchen counter.

The book comes with 60 recipes, but that's almost beside the point. (And who can agree on the definitive version anyways?) This is about how food is tied up in sentiment, and the role it can play in life. These are the stories of snacks people ate when they came home from school, memories from the holiday table, treats from the sorts of bakeries that don't exist anymore. Its very existence is an engagement in the fine Jewish tradition of debate, and there is clearly room for the arguments to continue. But The 100 Most Jewish Foods is also a love letter — to food, family, faith and identity, and the deliciously tangled way they come together.