Accessibility links
How The Pennsylvania Dutch Turned A Rural Town Into A Snack Food Empire : The Salt In a food landscape dominated by multinational conglomerates like Frito-Lay and PepsiCo, the small town of Hanover, Pa., has produced homegrown snacks for a century and is still thriving today. 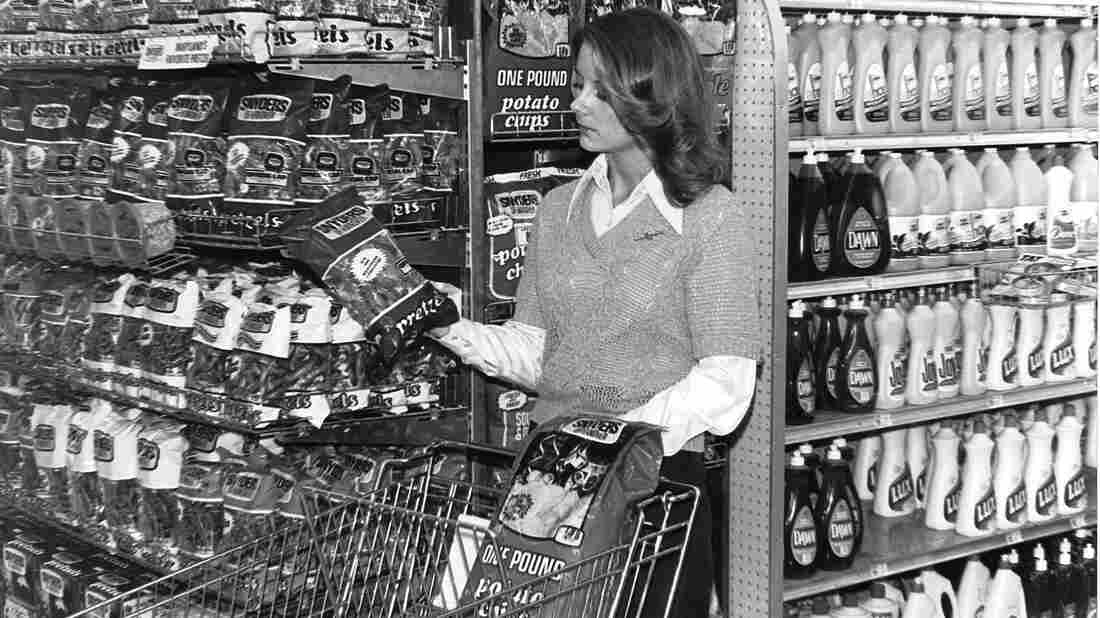 A woman shopping in the 1970s picks up a bag of Snyder's pretzels. Today, Hanover remains a center of snack food manufacturing, even as the food industry changes around it. Courtesy of Snyder's of Hanover hide caption 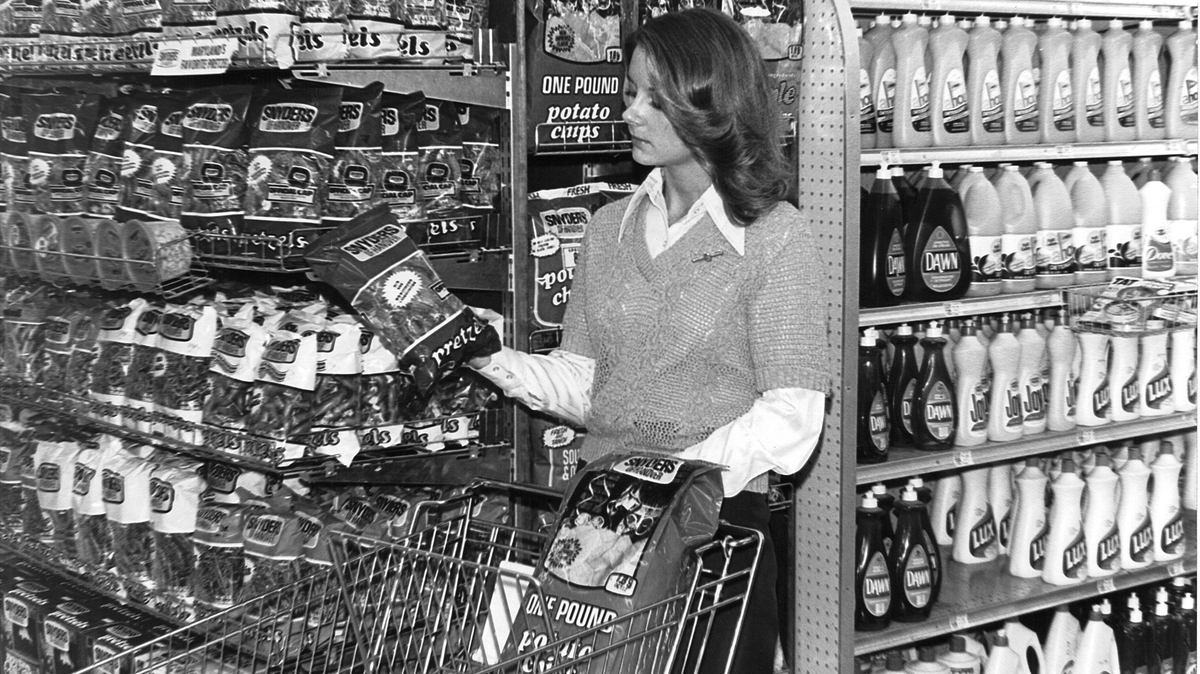 A woman shopping in the 1970s picks up a bag of Snyder's pretzels. Today, Hanover remains a center of snack food manufacturing, even as the food industry changes around it.

Courtesy of Snyder's of Hanover

Tucked close to the border of Pennsylvania and Maryland, the borough of Hanover, Pa., population 16,000, is a long way from Philadelphia and Pittsburgh.

A farming center with an industrial core, prior to the turn of the 20th century this rural town was best known as the site of the last skirmish before the Union and Confederate armies clashed at the Battle of Gettysburg in the summer of 1863. But thanks to a provident combination of heritage and modernization, York County, where Hanover is located, has exchanged its Civil War identity for a more savory image: "Snack Food Capital of the World."

Over the past century, no fewer than four snack food companies have been established in Hanover, including Utz Quality Foods, which has achieved a cultlike status among potato chip aficionados; and Snyder's of Hanover, which in 2016 was the country's bestselling pretzel brand, bringing in more than $216 million annually. Despite the acquisition of Snyder's by Campbell Soup Co. in March 2018, these companies, along with two others, Revonah Pretzels and Wege of Hanover Pretzels, call Hanover home. Several other snack food purveyors, including York Pretzel Co., Martin's Potato Chips, Good's Potato Chips, Tom Sturgis Pretzels and H.K. Anderson, are located elsewhere in York County and in the neighboring county of Lancaster.

In a food landscape dominated by multinational conglomerates like Frito-Lay and PepsiCo, the century-long survival of Hanover's snack food companies is nothing short of remarkable. Why has the homegrown snack food industry here been so successful, while other fledgling snack food industries in places like Ohio and Southern California failed to take flight? Because of two factors unique to Southern Pennsylvania alone: the Pennsylvania Dutch and a strategic location just outside the major metropoles of the East Coast.

The Pennsylvania Dutch, descendants of German-speaking European immigrants, are among the most identifiable American-made communities. Settling in Southern and Central Pennsylvania in the 18th century, the Pennsylvania Dutch (including subsets like the Amish and Mennonites) earned a reputation as hardworking, inventive and religious people, says Marvin Muhlhausen, archivist at the Yelland Research Library at the Hanover Area Historical Society.

They also, according to food historian William Woys Weaver, had complex culinary traditions that combined Old World traditions with American innovations. Hard pretzels are among the most recognizable Pennsylvania Dutch foods. Originating in German-speaking Europe during medieval times, once in Pennsylvania they became a popular snack sold at markets and county fairs — easy to make and, later on, easy to produce in large quantities. 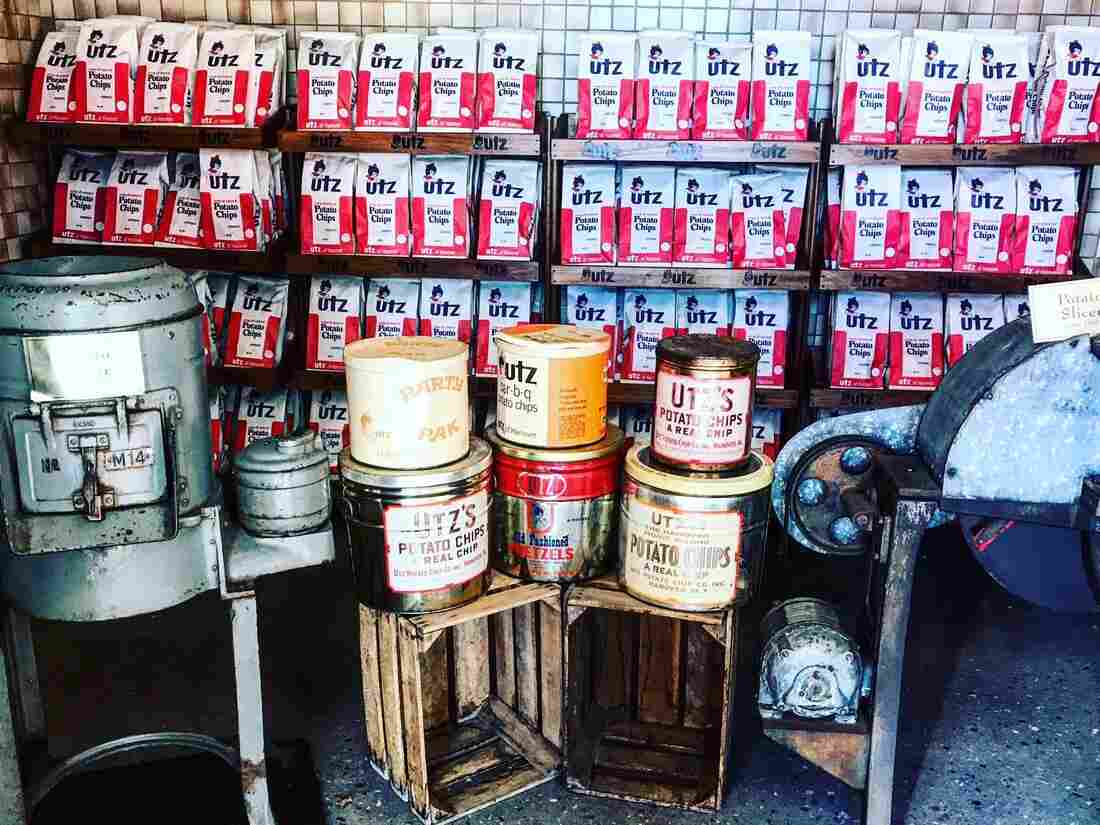 On display during the Utz factory tour is an array of the company's products and equipment circa 1930s. Shoshi Parks for NPR hide caption 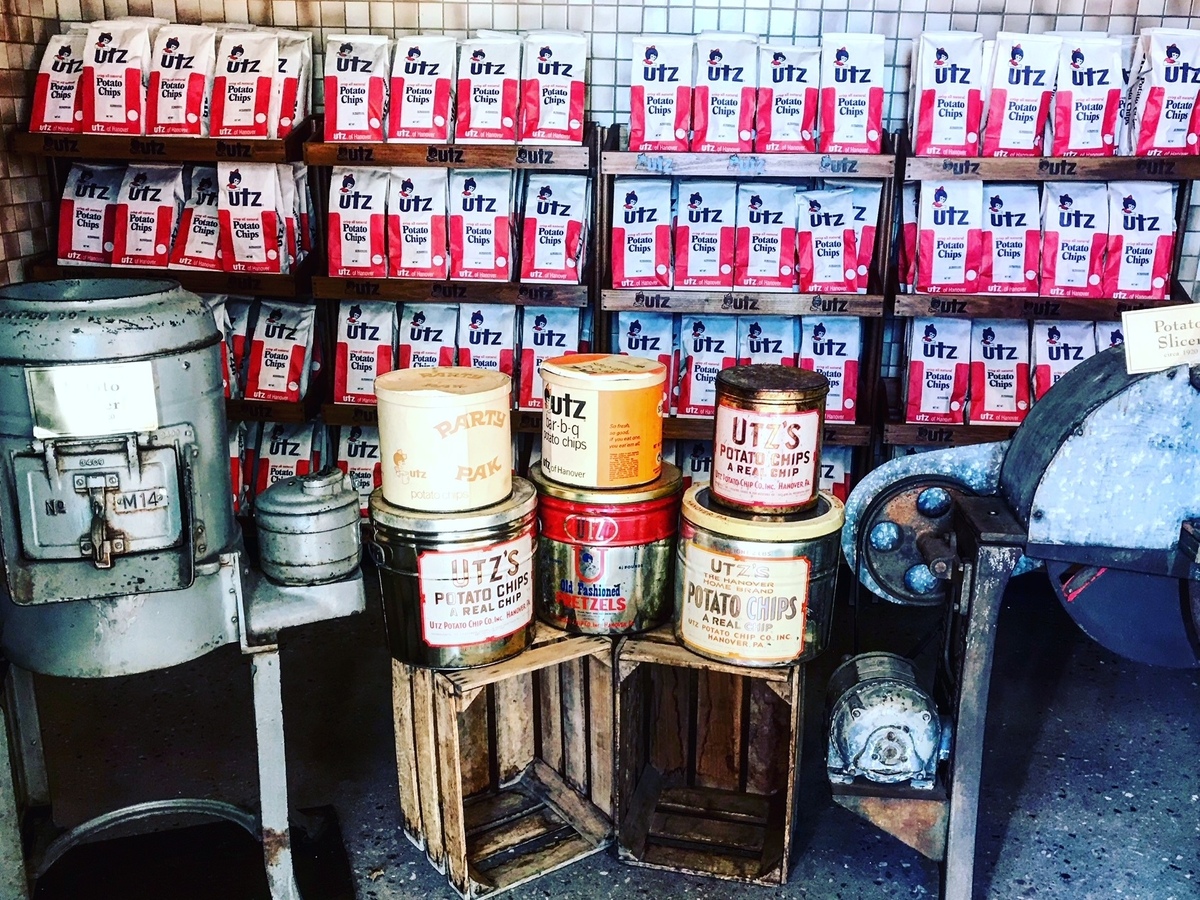 On display during the Utz factory tour is an array of the company's products and equipment circa 1930s.

Although the relationship between the Pennsylvania Dutch and the potato chip formed more recently than with the pretzel, the community nevertheless put its unique stamp on the snack food. The potato chip exploded onto the American culinary scene in 1853 thanks to George Crum, a Saratoga Springs, N.Y., cook of African American and Native American heritage. The popular "Saratoga Chips" spread quickly down the East Coast to Pennsylvania Dutch country sometime before the turn of the 19th century.

"Chipping potatoes" — potato varieties like Maris Piper, King Edwards and Rooster — which grow particularly well in York and Lancaster counties, made the raw materials for the snack easily accessible. But lard was the real reason that potato chips flourished in Southern Pennsylvania. Pennsylvania Dutch cuisine is rife with pork products — scrapple, sausages, stuffed sow's stomach (hog maw) and, of course, lard. Pastries and other fare cooked in lard are, in fact, so common in Pennsylvania Dutch country that Dirk Burhans, author of Crunch: A History of the Great American Potato Chip, refers to it as the "Lard Belt."

Potato chips, too, got the lard treatment. Fried in pork fat, the potatoes became hard and crunchy, with a flavor that couldn't be matched by vegetable oil. According to Burhans, people went crazy for lard-fried chips made by companies like Original Good's, King's and Zerbe's. Even Hanover's largest potato chip company, Utz, still produces a lard-fried brand called Grandma Utz's Handcooked Potato Chips.

If Pennsylvania Dutch heritage is the why of the "Snack Food Capital," Hanover, itself, is the how. Unlike the more traditional Amish and Mennonite subsects that populated neighboring Lancaster County, the small farm town of Hanover was populated by industrious Pennsylvania Dutch residents who were eager adopters of mechanization and factory production, according to Muhlhausen. By the turn of the 20th century, despite a population of just over 5,000 people, major industrial operations had evolved from a constellation of local businesses producing everything from leather to furniture to bricks. As Hanover industrialized, so too did the bakeries and food companies of the 19th century. By the 1940s and 1950s, early companies like Olde Tyme Pretzels (today's Snyder's of Hanover) were modernizing production.

Snyder's midcentury modernization was well-timed, closely mirroring a major local transportation innovation: the Pennsylvania Turnpike. Until the turnpike was built, says Weaver, "almost every small town in Pennsylvania had its pretzel baker." But once it was completed, shipping food products to metro areas like Baltimore, Philadelphia and Pittsburgh became more efficient. Hanover's snack food companies were in a perfect position to capitalize not just on the low cost of rural labor but on the fact that workers outside city centers were less likely to unionize, Weaver explains.

While American manufacturing went into decline by the late 20th century, innovative strategies and a deep understanding of their loyal Mid-Atlantic consumers, who remain the primary consumers of most Hanover snack foods, have kept these companies not just afloat, but thriving. Even Snyder's, which sells its pretzels all over the world, is largely driven by insight into the needs of its consumers, according to Chris Foley, senior vice president and chief marketing officer of Campbell snacks.

"The expansion of the snack food industries coincided with the decline of some of the other manufacturing centers during the latter part of the 20th century," Muhlhausen says. "The fortunate effect for Hanover was continued and increased employment for its industrious workforce."

Today, Hanover remains a center of snack food manufacturing, even as the food industry changes around it. And while some of its companies have been folded into larger operations, others, including Utz, are still family owned and operated from town. "We're making adjustments," says the owner of Revonah Pretzels, Kevin Bidelspach. The company has found a niche making pretzels by hand that cannot be duplicated by machines. "It's definitely been a big evolution since it started with people like us, but the handmade concept allows us to make a very specialized product. We're not out there trying to have our pretzels everywhere; our footprint is more defined."

Despite competition from global conglomerates, companies like Revonah and Utz are "essential components" of Hanover, says Muhlhausen. Indeed, confirms lifelong Hanover resident Jane Kindon, the companies are so interwoven into the fabric of the town that both she and her daughter attended school with two generations of snack food families, and one of her sons worked at the Snyder's factory. A box of "broken" pretzels purchased on the cheap from the Wege factory was always on hand when her kids were young.

"Because of the personal connection, it's just something we grew up with and ... our kids grew up with them," Kindon recalls. "But they're good-paying jobs. I think the people are happy about them being here."