Accessibility links
Toronto Restaurant Fights Waste By Chopping Menu Prices Till Food Is Gone : The Salt Every Sunday, Farmhouse Tavern plans how to sell out of perishable food and open bottles of wine so it can shut up shop with an empty refrigerator for the next three days, when it is closed. 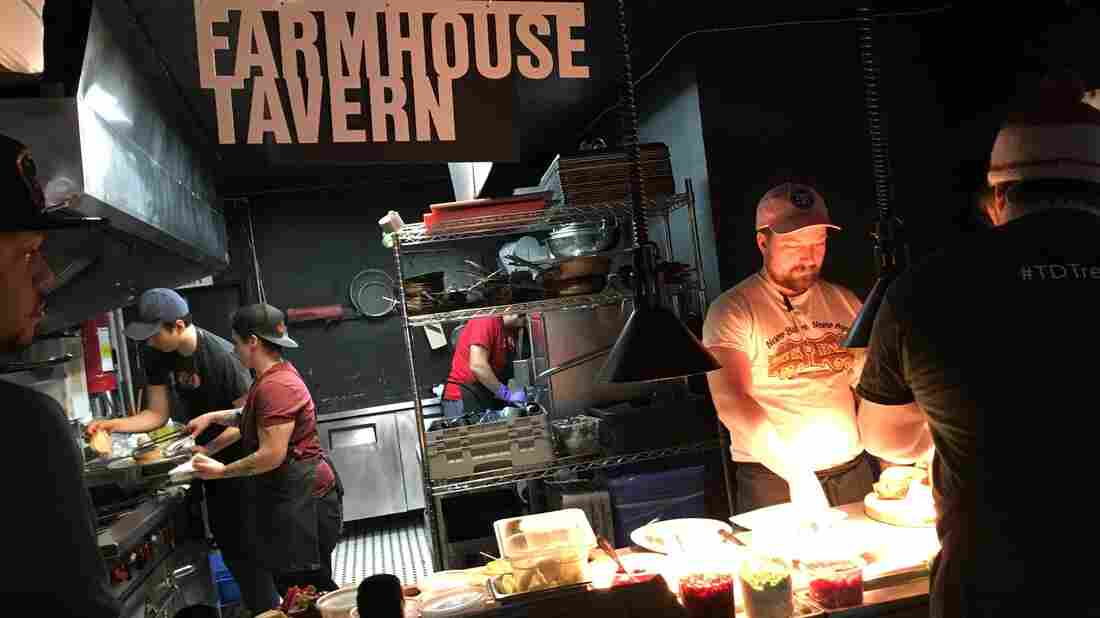 Farmhouse Tavern in Toronto has found a way to turn quiet Sundays, which often lead to either throwing away food or freezing it, into a way to sell out menu items. Jonathan Bloom/Food & Environment Reporting Network hide caption 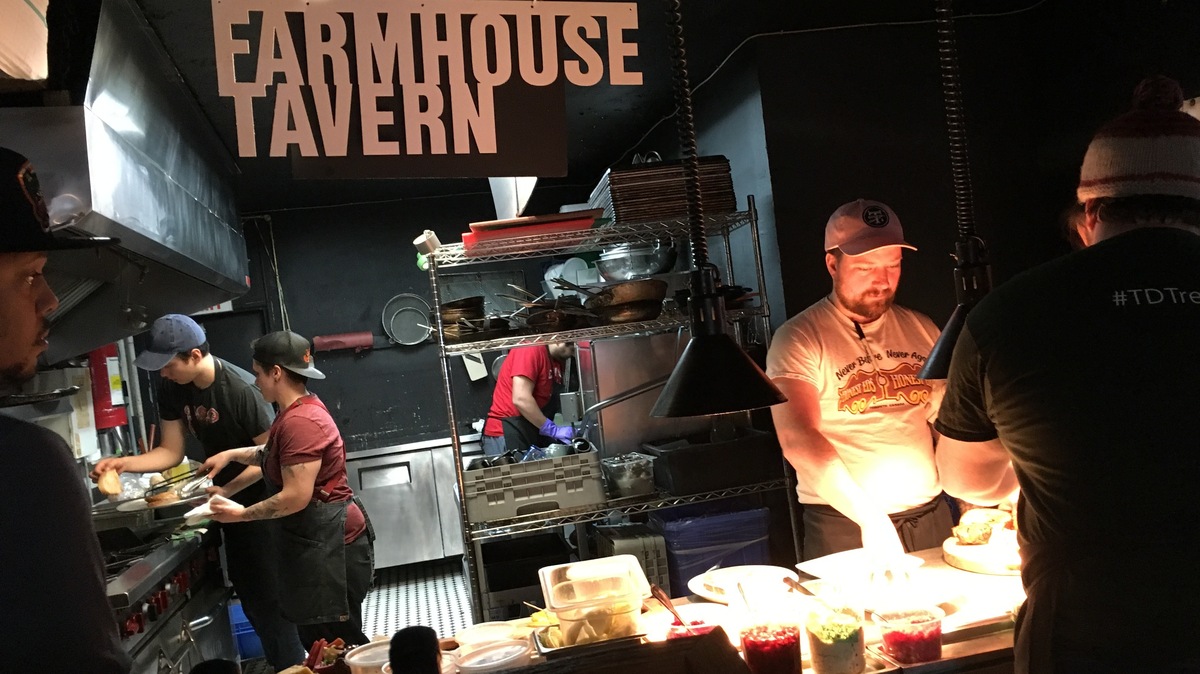 Farmhouse Tavern in Toronto has found a way to turn quiet Sundays, which often lead to either throwing away food or freezing it, into a way to sell out menu items.

It's 3:51 p.m., and chef Ashley MacNeil is busy planning how to run out of food. Sunday brunch service has ended at Toronto's Farmhouse Tavern, and she has already cubed and deep-fried the morning's excess biscuits into croutons to adorn tonight's house salad. Now she is fretting over an excess of shaved Brussels sprouts, which isn't something she wants to freeze. She sighs and hopes it'll be a big salad night.

MacNeil eyes the shimmering skin-on fillets of trout. Fourteen will be enough for tonight's Fish Dish entree, she decides, and she asks one of her cooks to double wrap and freeze six, which she'll later cure into gravlax. "You want to run out, but you want to make sure that you have enough of a selection so people come back," says MacNeil, 34. "It's a weird teeter-totter game."

That game begins around 5 p.m., as the horseshoe-shape restaurant begins to fill with diners ordering "buck a shuck," or 1 Canadian dollar ($0.74) oysters. The promotion is just one of eight hourly food and drink discounts designed to attract and retain customers on Sunday evenings. The goal is to sell out of perishable food and open bottles of wine so that Farmhouse can shut up shop with an empty refrigerator for the three consecutive days, when it is closed. Oh, and this weekly event is called F*** Mondays.

Come again? The strong language stems from owner Darcy MacDonell's lifelong dread of the coming workweek and how, in the restaurant business, quiet Sundays lead to either throwing away food or freezing it. Because he is adamant that "freshness is omnipotent," refrigerating unserved items and corking wine bottles are not options.

That philosophy led MacDonell to create Farmhouse's compelling offer: Come thumb your nose at Monday by enjoying an affordable evening that'll help us finish our food and drink.

A table of three women, having arrived at 4 p.m., is doing its very best to help out. "We came for the $4 Caesars," says Andi Wheelband, 36, referring to a Canadian bloody mary-like drink. "And then one Caesar turned into two Caesars, which turned into oysters and a bottle of white wine."

As afternoon turns into evening, Wheelband and her friends order two half-price appetizers and pints of beer on special for CA$6 ($4.47). By 8 p.m., they are ready to share a few half-price entrees — the short rib pasta for CA$10 ($7.45) and the Fish Dish for CA$12 ($8.94). All three women have work in the morning, but — Monday be damned — at 9 p.m. they're discussing which glass of wine to sample next. 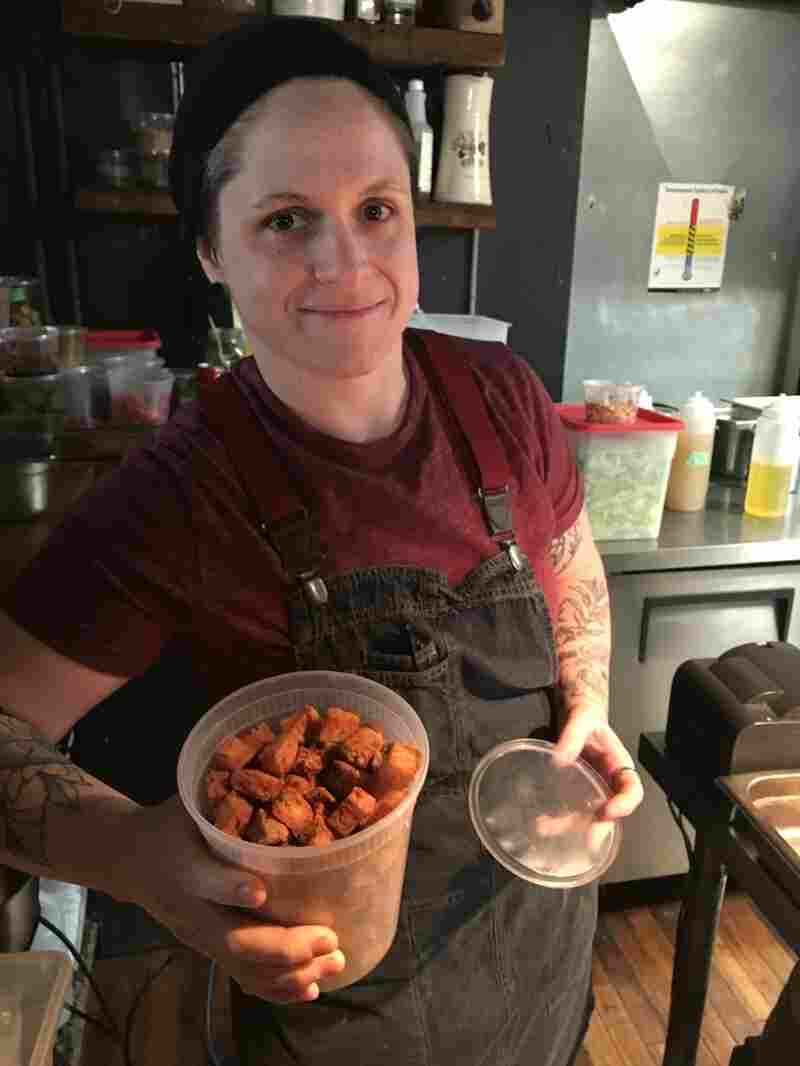 Chef Ashley MacNeil shows off the croutons for the night's house salad. They were made from the morning's excess biscuits. Jonathan Bloom/Food & Environment Reporting Network hide caption 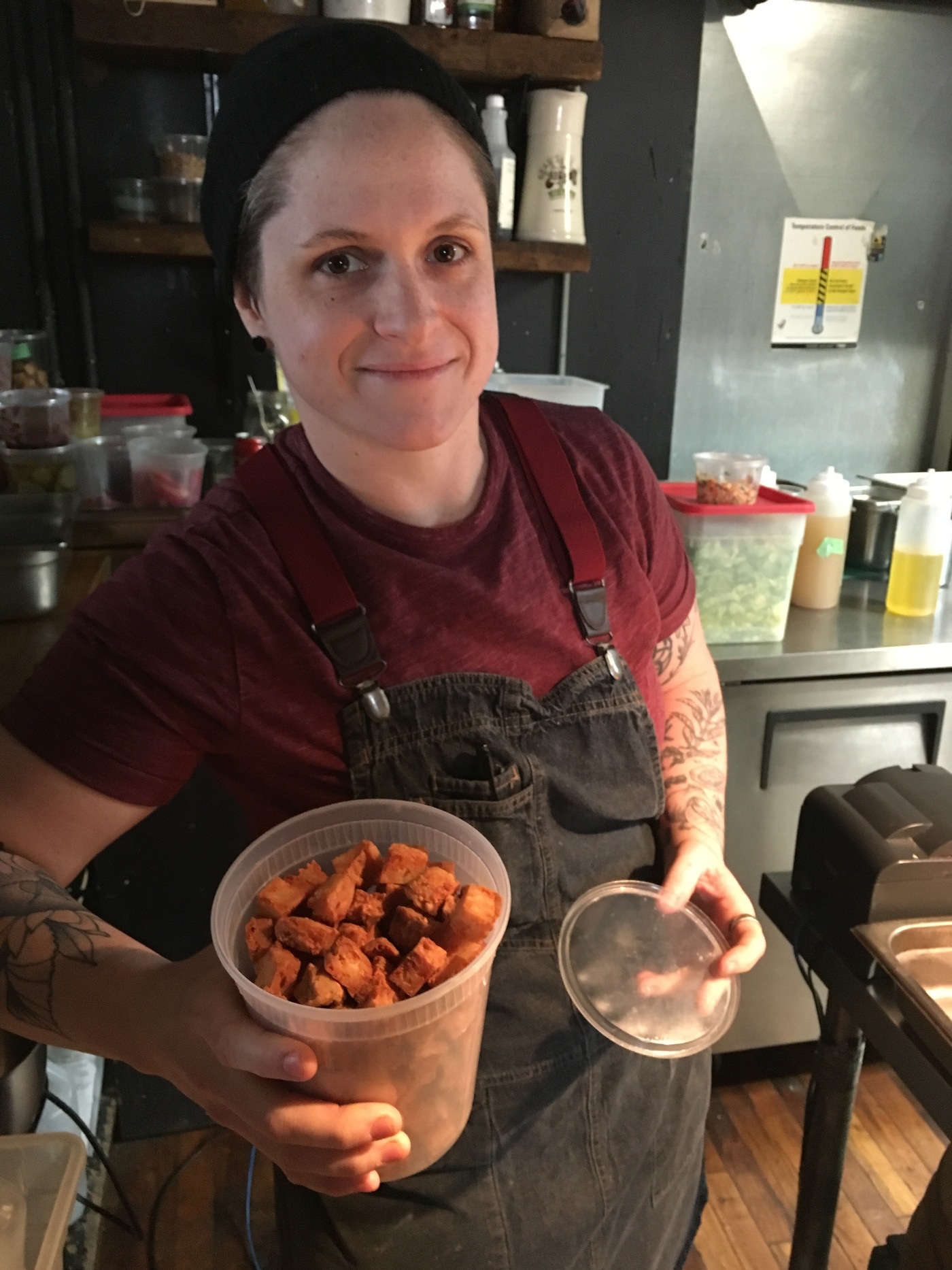 Chef Ashley MacNeil shows off the croutons for the night's house salad. They were made from the morning's excess biscuits.

At that exact hour, says bartender Riley MacLean, 29, "any open wine is [CA]$9 per glass [$6.70]. It's pretty easy to steer people toward the open wines when you tell them it's [nearly] half price" for some bottles.

Despite a casual environment — waiters wear mismatched T-shirts, and the decor leans toward cowhide banquettes and photographs from the MacDonell family's Ontario dairy farm — Farmhouse is not cheap, and Toronto is not an inexpensive city. MacDonell is adamant about serving premium local food and drink, and that comes at a cost — which makes the deep discounts of F*** Mondays even more compelling.

Farmhouse relies on chalkboard menus, the better to cross off dishes as the night wears on. On Sunday, there's eighty-sixing on the central board. When that happens, all eyes turn to the server reaching over or around diners to cross off an item. "There are definitely noticeable sighs, and guests vocalize their heartbreak when they miss out," says MacDonell.

Those dramatic erasures also create some urgency. A young artist couple, Candace Bell and Anthony Ficaro, voice two of those sighs as the carrot tartare appetizer disappears from the board. Their dismay is short-lived, though, and they switch to the bone marrow appetizer to accompany an order of 36 oysters. "That things could run out makes us order faster," says Bell, 34, a Sunday regular. "That's part of the deal when you come out on a Sunday. It's a bit of a gamble."

Another duo arrives at 8:50 p.m. and rushes over to the blackboard just as the Duck, Duck, Goose! is crossed off. They order a dozen oysters, bone marrow, foie gras, tomato tagliatelle and the Fish Dish. The dwindling supply is sparking demand. "We started to see the good stuff was going away, so we ordered quickly," says Tara Veysey, who comes once a month with her husband, Charles. "We end up ordering more because of the specials, but we'd come here anyway."

Farmhouse is comfortable striking dishes from its chalkboard menu any night. Yet the price for other restaurants that refuse to run out is either unfresh food, abundant waste — or both. A recent study found that restaurants, hotels and institutions are responsible for 13 percent of avoidable Canadian food waste. The U.S. restaurant sector generates 18 percent of U.S. food waste, at a cost of roughly $25 billion annually.

MacDonell, who learned to loathe waste while growing up on his family's farm, implemented F*** Mondays upon opening Farmhouse in June 2012. "It became clear that we would likely always struggle to get diners in after a certain point on Sunday evenings," he says, with the restaurant located in a hip, but family-filled, neighborhood called The Junction. "I hate freezing stuff, and I hate throwing food out, so we needed to find a solution that would help us use up as much as we could before closing for three days." 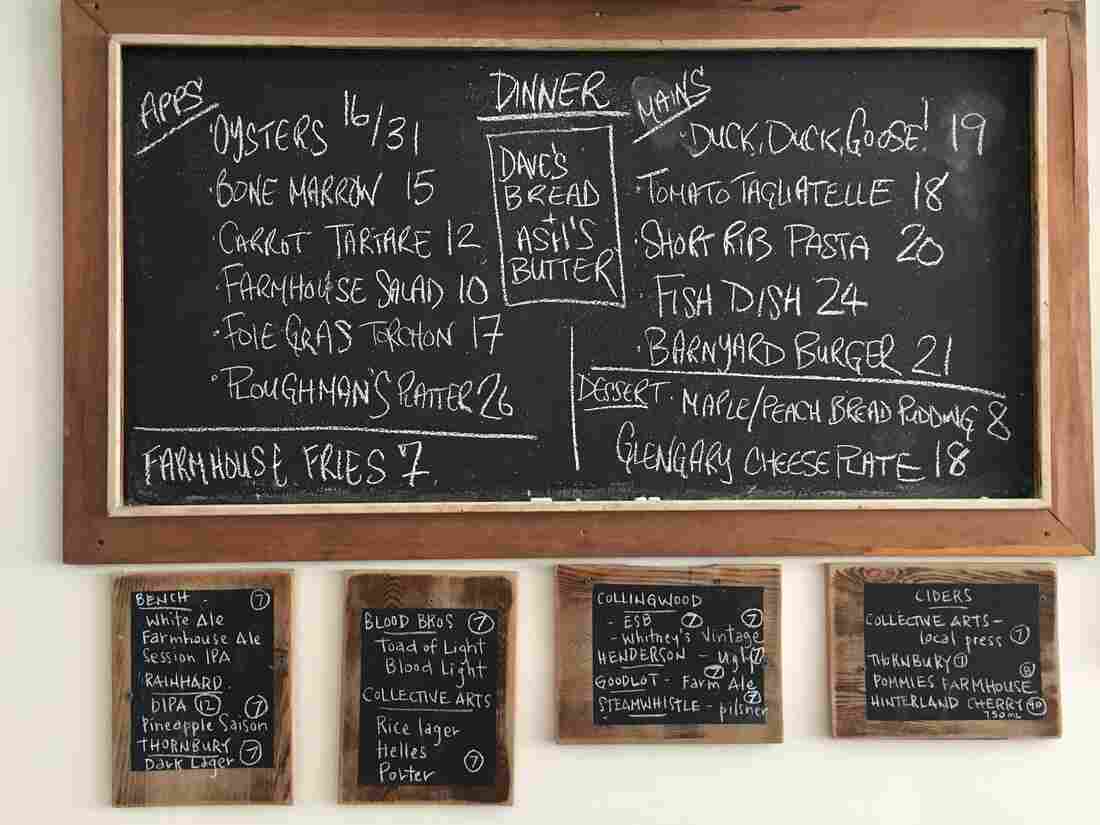 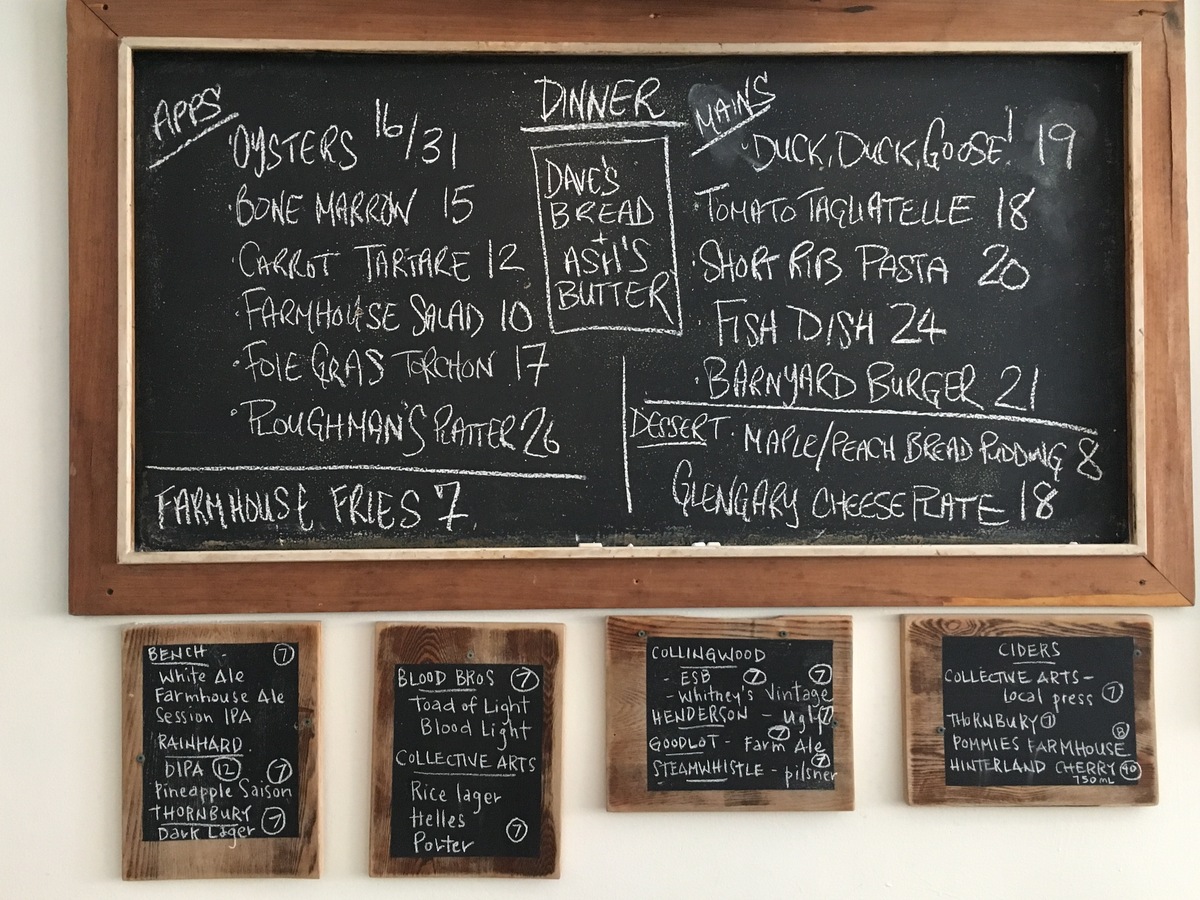 Farmhouse Tavern relies on chalkboard menus, the better to cross off dishes as the night wears on.

By 9:30 p.m., the kitchen has closed, and MacNeil is pleased with her nearly empty fridge. There's still an abundance of shaved Brussels sprouts — it turned out not to be a big salad night — but she plans to pickle them early next week. Most of the garnishes were already pickled and will store. Aside from about 8 ounces of chimichurri sauce that won't be as bright in four days, Farmhouse wasted no food on this Sunday and virtually no food the rest of the week. What the restaurant didn't manage to use went into its green city compost bin.

That's no small feat, given that Farmhouse fed upwards of 70 people this evening. "It does take a certain amount of managing and mental energy, but it's worth it when, at the end of the night, there's virtually no food left," says MacDonell.

There is another reward aside from that satisfaction. At 10:32 p.m., the staff — bartender, chef, cooks, servers and dishwasher — congregates at the bar to finish off wine bottles that are less than half full. "It'll be a quick one, because we're all pretty sick of each other by this point," MacNeil quips.

The next morning, MacNeil will process the croutons into breadcrumbs, a garnish for a Thursday dish she has, on Sunday, yet to conceptualize. Such decisions are better left for later. "That's a Monday thought," she says with a smile.

This story was produced in collaboration with the Food & Environment Reporting Network, a nonprofit investigative news organization.

Jonathan Bloom is the author of American Wasteland and the creator of wastedfood.com. He regularly writes and speaks about wasted food, and his work has appeared in The New York Times, National Geographic, The Washington Post, The Guardian and Newsweek.