Accessibility links
U.S. May Ease Rules Restricting Alaska Natives From Harvesting Seal Meat : The Salt For decades, the government stood between the Unangan people and the fur seals they subsist on. But as the seal population declines, the proposed revisions now face opposition from the Humane Society. 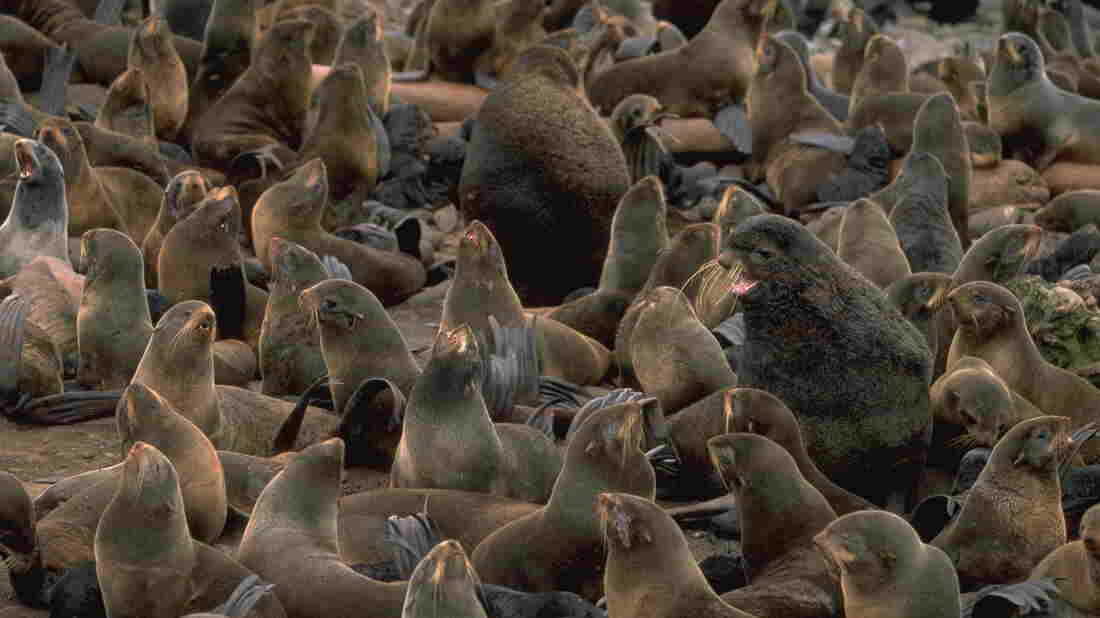 Fur seals fill up the beach of St. Paul Island, Alaska. Strict federal regulations have granted access to fur seals solely during a 47-day subsistence harvest in the summer, meaning the Unangan people have had time to harvest only about 400 seals per year. Brooks Kraft/Sygma via Getty Images hide caption 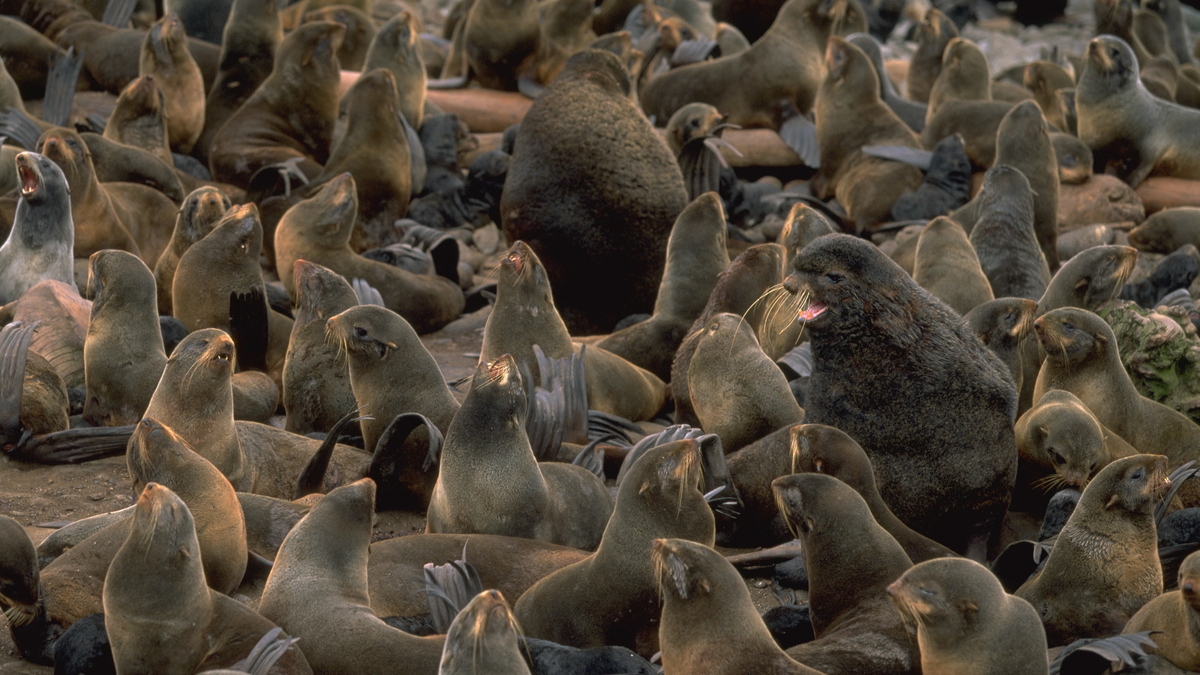 Fur seals fill up the beach of St. Paul Island, Alaska. Strict federal regulations have granted access to fur seals solely during a 47-day subsistence harvest in the summer, meaning the Unangan people have had time to harvest only about 400 seals per year.

Nearly year-round, northern fur seals can be found on the beaches of the Bering Sea island of St. Paul, Alaska, or in the waters nearby.

The small island's remote location — more than 250 miles from mainland Alaska — makes the seal meat particularly attractive to residents of St. Paul. Groceries have to be barged in or flown in to the island's sole store, and prices reflect that: Ground beef is $6 a pound, and a 12-ounce package of Oscar Mayer beef bologna costs $10.

St. Paul's Alaska Natives refer to themselves as the Unangan people. Through the mid-1980s they, as employees of the U.S. government, killed the seals by the tens of thousands annually to supply a global fur trade. The Unangan people worked largely in exchange for goods and services in an arrangement that a federal supervisor described a century ago as "actual slavery," according to Barbara Boyle Torrey's book, Slaves of the Harvest.

But since the end of the commercial harvest in 1984, strict federal regulations have granted access to the seals solely during a 47-day subsistence harvest in the summer. St. Paul residents freeze as much meat as they can; for the rest of the year, the animals are off limits, forcing residents to turn to pricey store-bought food and the occasional illegal harvest.

The island's tribal government has reported harvesting no more than 400 seals annually over the past decade; there just isn't time to harvest any more than that.

"The harvest of fur seals is ingrained in us out here. It's a part of who we are," said Amos Philemonoff, the tribe's president. "To be severely restricted in expressing who we are is just a darn shame. We want nothing more than to live off the land, live off the sea. But unfortunately, we're regulated out of that." 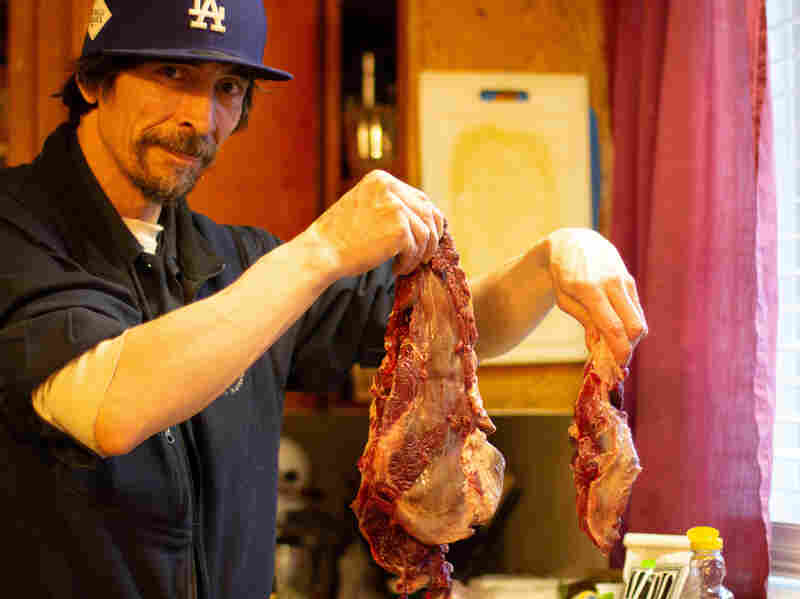 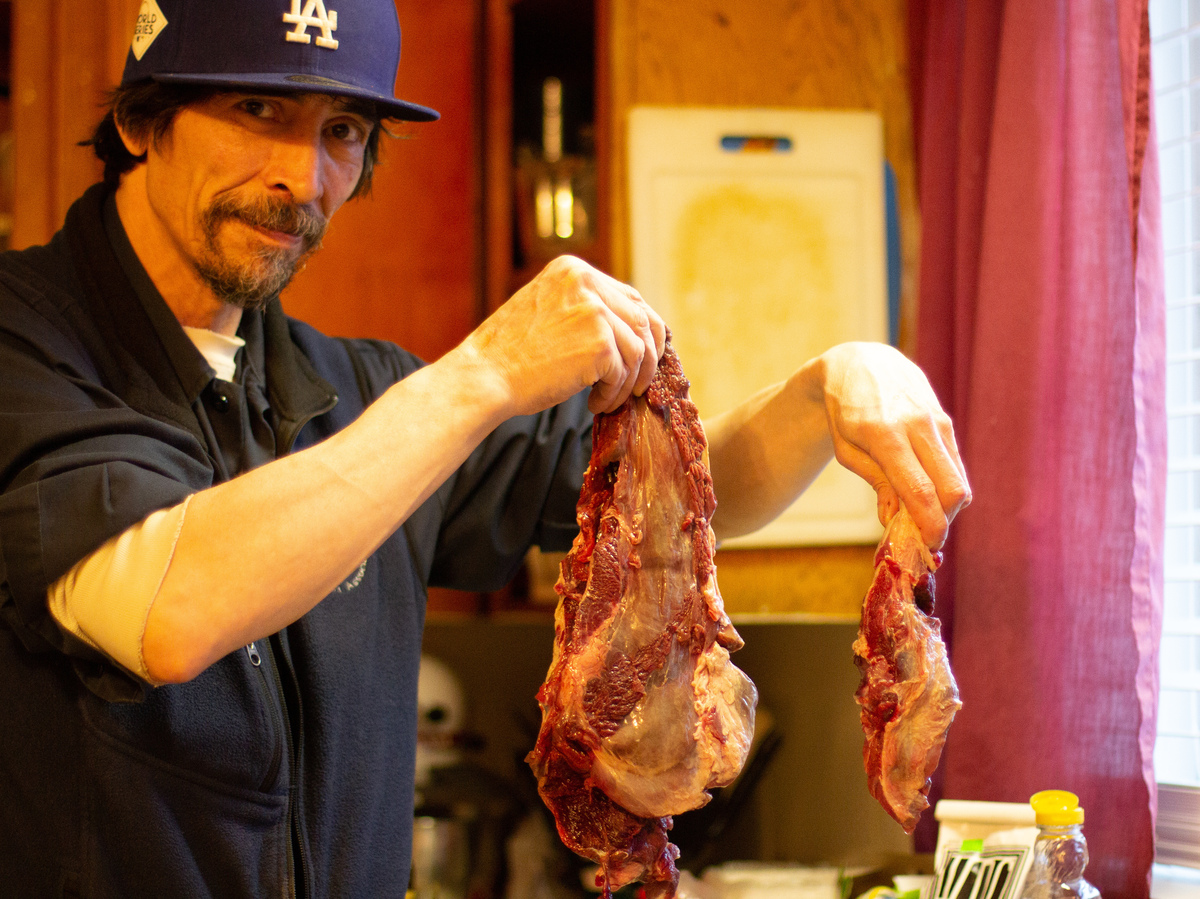 Robert Melovidov, a tribal council member, holds up fur seal meat that he's preparing to cook in his home on St. Paul Island.

Since 2007, the tribe has been petitioning federal managers to relax the seal harvest regulations. And now, the National Marine Fisheries Service is finishing a rewrite — one that would allow seals to be taken more than 11 months a year and would loosen restrictions on the size of seals that can be killed.

The fur seal population has been declining for reasons scientists haven't been able to explain. But the Fisheries Service conducted its own unpublished statistical analysis — cited in the rule change — that argues that any additional harvest, up to a 2,000-seal annual limit, will not worsen the existing trend.

"There is no doubt that this is an important item, culturally and nutritionally, for the communities," said Mike Williams, the fisheries official overseeing the rule changes from Anchorage. "This is real food security."

"A sacrifice that a lot of guys just can't make"

When St. Paul and its sister island, St. George, were first occupied by the Russians in the late 18th century, explorers described the beaches as so covered with marine mammals that they looked golden from the sea. The explorers could hear the sound of the seals through the fog.

The islands, later named the Pribilofs, were uninhabited. But the Unangan people's oral traditions hold that they discovered the islands long before and used them as hunting grounds.

Once the Russians made their own discovery of the islands, they forcibly moved Unangan people from the Aleutian Islands to the Pribilofs to serve as laborers in the commercial harvest of the seals' furs. That harvest lasted 200 years, first under Russian management and then, after the 1867 purchase of Alaska, under the control of the U.S. government.

Through the start of World War II, the power dynamics under U.S. control were stark. Unangan people didn't just earn low wages; the government also controlled the distribution of food, and only heads of household could pick up groceries at the store.

The Health Effects Of Government Food Boxes: Native Americans Know All Too Well

The commercial harvest ended 35 years ago, when the U.S. Senate, under pressure from animal welfare groups, failed to renew an international treaty that governed the harvest.

At the time, the leftover meat from the fur harvest was a staple food for the Unangan people: In the 1980s, each St. Paul household ate about 13 pounds a week, according to one estimate.

But when the federal government ended the commercial harvest and authorized the Unangan people to continue taking seals for subsistence, the regulations set up a framework similar to that of the commercial era, opening only a short season in midsummer. That timing poses a dilemma for St. Paul's many commercial fishermen.

Halibut fishing has become one of the best cash-paying jobs on the island. But the peak season comes during the summer, and a single day off the water can cost a boat as much as $30,000, said Philemonoff, the tribal president and a commercial fisherman.

"The seal harvest is a sacrifice that a lot of guys just can't make," he said. 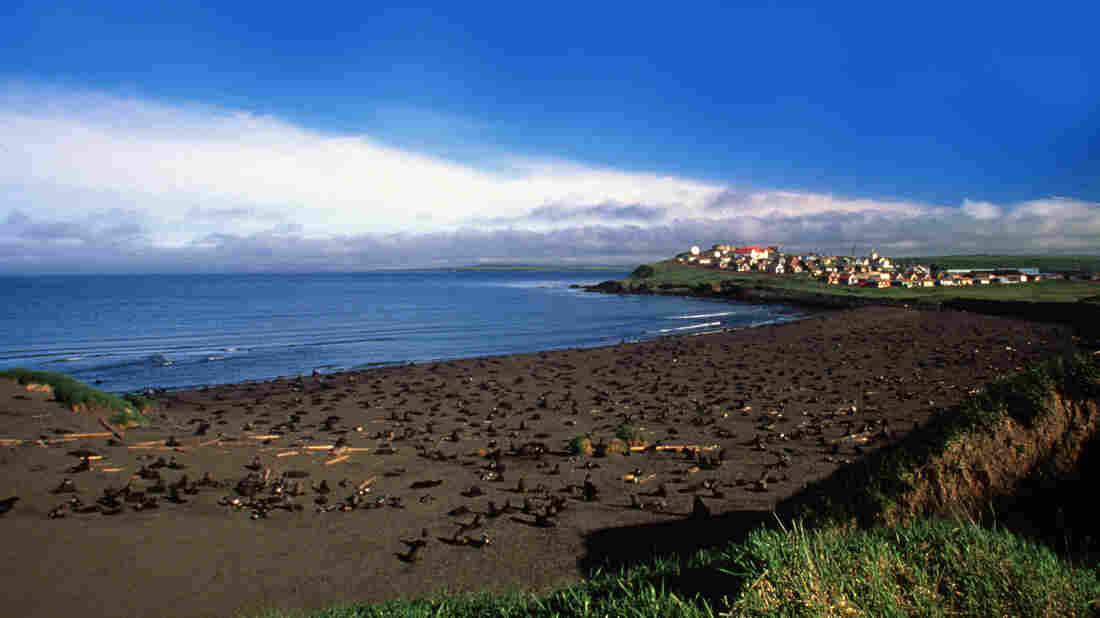 St. Paul's remote location — more than 250 miles from mainland Alaska — makes the seal meat particularly attractive to residents. Groceries have to be barged in or flown in to the island's sole store, and prices reflect that. Brooks Kraft/Corbis via Getty Images hide caption 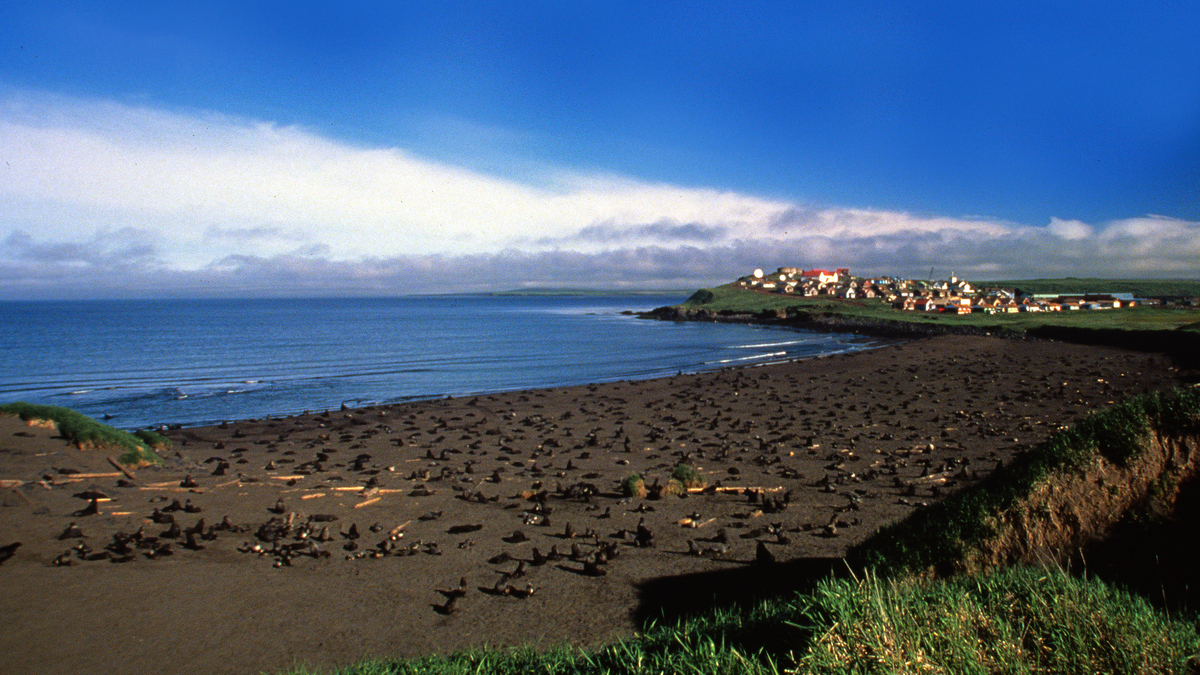 St. Paul's remote location — more than 250 miles from mainland Alaska — makes the seal meat particularly attractive to residents. Groceries have to be barged in or flown in to the island's sole store, and prices reflect that.

The tribe wants more latitude in the harvest timing also because of the potential for climate change to affect when seals haul out on the beaches each summer.

"I've seen, after the deadline, up to 1,500 animals that are perfect size just, bam, show up. And you're like, 'Man, where were those?' " said Robert Melovidov, a tribal council member who was foreman of the subsistence harvest last summer. "We have no control over when spring is going to start and when winter is going to start. And those play a very big role in when the animals are here."

While the government is advancing the rule change, the revisions face opposition from the Humane Society of the United States. Officials at the group say that deregulating the harvest doesn't make sense amid the long-standing decline in the fur seal population.

There were an estimated 2.1 million fur seals in the Pribilofs in the 1950s. Today, the population is one-fourth of that and is designated as "depleted." Federal scientists estimate that the number of fur seals born on St. Paul — home to the vast majority of the Alaskan population — has been falling 4% a year for two decades.

There's no scientific consensus on the cause of the decline. Researchers, as well as some St. Paul residents, have eyed industrial-scale fishing in the Bering Sea that targets a species called pollock — one of fur seals' primary foods — but that link has not been definitively established.

In a phone interview from Massachusetts, Sharon Young, the Humane Society's marine issues field director, said she hasn't seen a "strong justification" for revising the subsistence regulations. While the government's analysis concluded that the changes will not worsen the population decline, Wilson said that the existing trend requires a more careful approach. 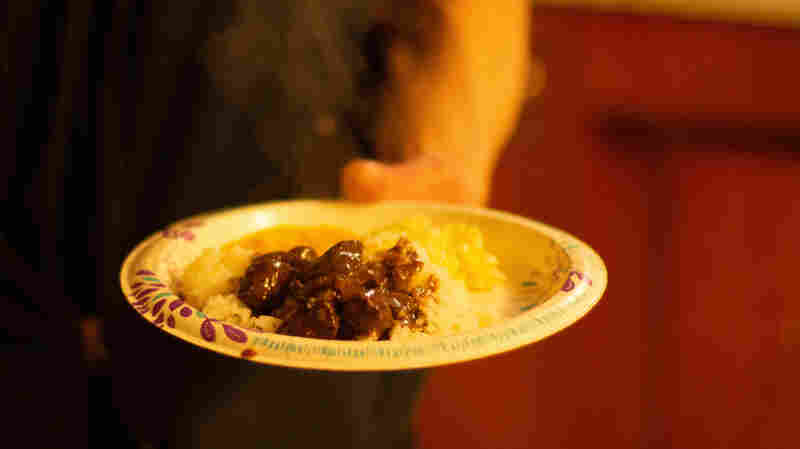 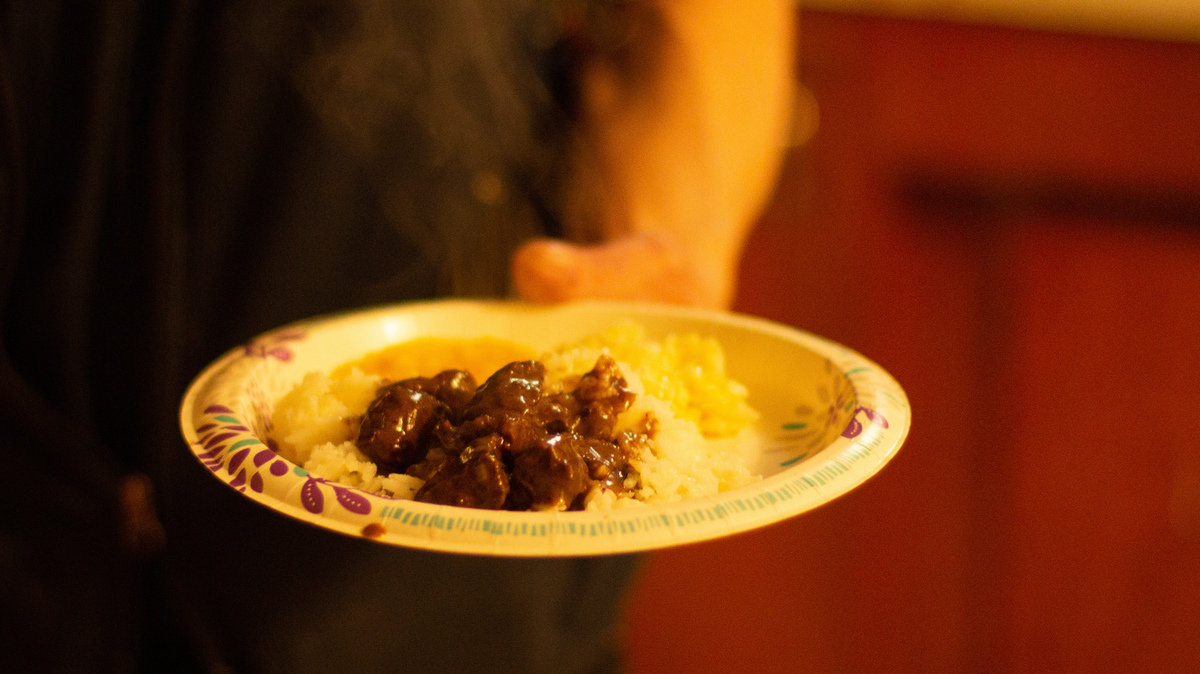 Melovidov holds a plate of fur seal and rice.

"We don't know what's causing the decline," she said. "And increasing the number of animals being killed — when we don't even understand why the population continues to decline and what, if anything, can be done about it — is hardly precautionary."

The Humane Society went to court in the 1990s in a failed effort to try to limit the harvest of fur seals on the Pribilofs; Young said her organization won't decide on its next steps until it sees the final version of the new rules.

He acknowledges that more seals are likely to be killed than in the recent past, since the short summer season has meant that the Unangan people haven't had time to harvest more than 400 seals a year.

But Williams' agency, supported by its 11-page statistical analysis, said in its formal proposal to change the rules that even harvesting all 2,000 seals will not have "significant, negative population consequences."

"We are confident in the biological consequences, even if the community needs that full 2,000 animals for food security and subsistence. That is still safe for the population," Williams said. He added, "The potential impact on the population is barely detectable."

Williams said he hopes the revisions can take effect in time for St. Paul to harvest the seals before the end of the year.

The Unangan people are excited for year-round access to fresh meat, said Philemonoff, the tribe's president — in part because it's healthier than the processed food at the store.

Philemonoff said he's a "case in point." He has diabetes, high blood pressure and high cholesterol, and rather than eating store-bought food, he said he'd like more fur seal. His favorite is when it's cooked in a pot roast, with gravy, and served over rice or potatoes.

"If I got back to a totally traditional diet," he said, "I probably wouldn't have half the issues I have right now."

This story comes to us from Alaska Public Media.