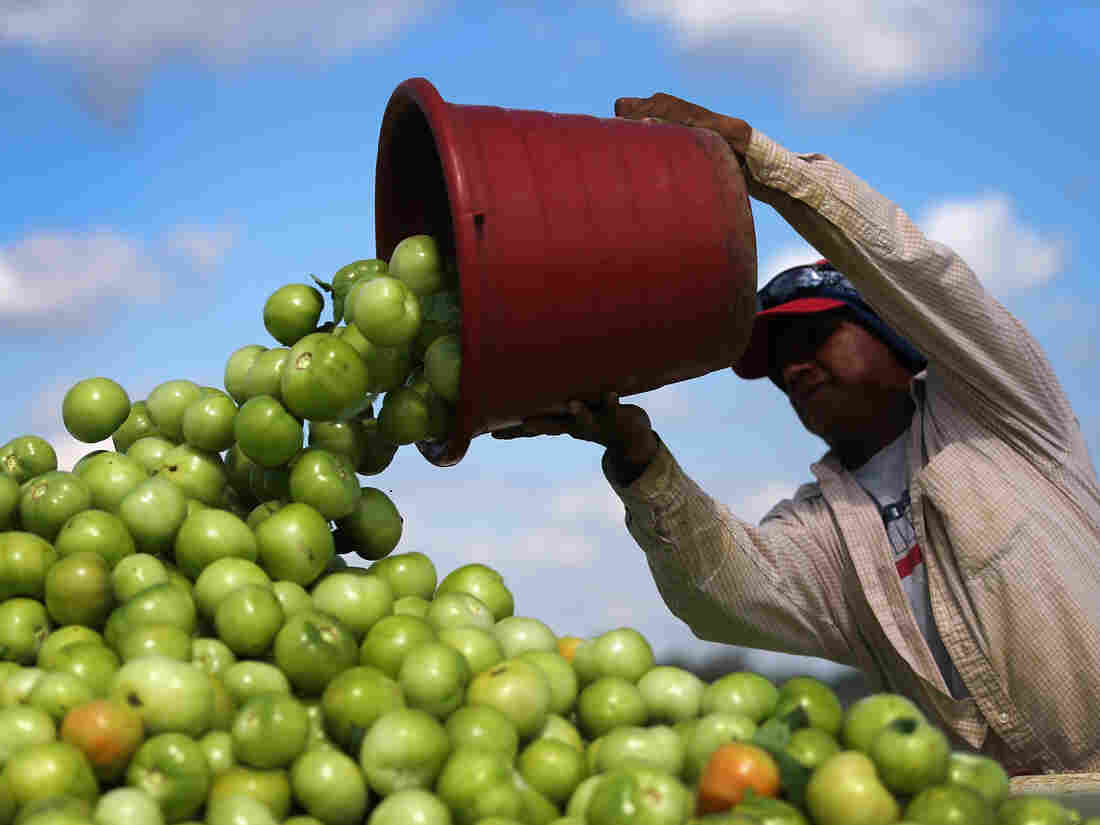 A worker dumps a bucket of tomatoes into a trailer at DiMare Farms in Florida City, Fla., in 2013. The Trump administration is preparing to level a new tariff on fresh tomatoes imported from Mexico in response to complaints from Florida growers. Joe Raedle/Getty Images hide caption 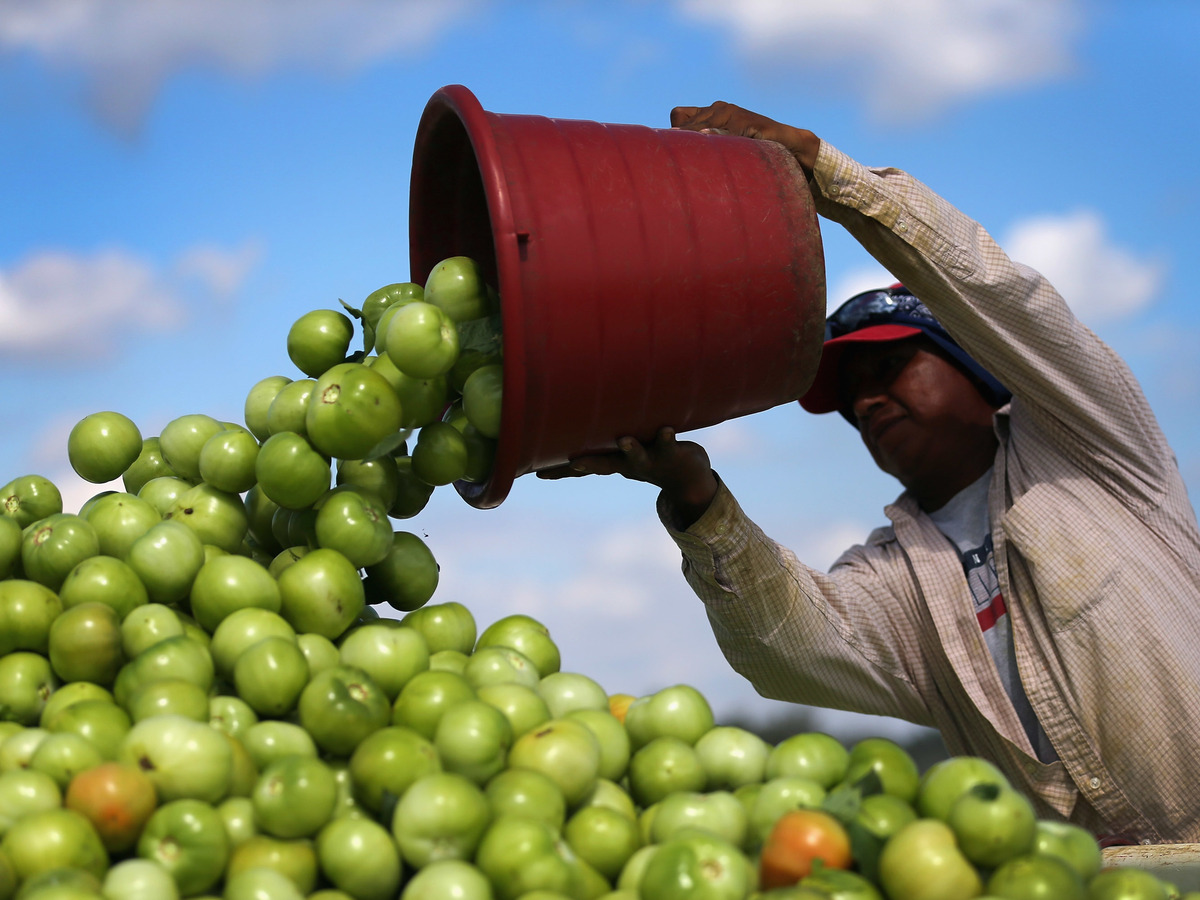 A worker dumps a bucket of tomatoes into a trailer at DiMare Farms in Florida City, Fla., in 2013. The Trump administration is preparing to level a new tariff on fresh tomatoes imported from Mexico in response to complaints from Florida growers.

While the trade war with China is rattling financial markets around the world, another trade skirmish is about to play out in the supermarket — in particular, the produce aisle. The Trump administration is preparing to level a new tariff — or tax — on fresh tomatoes imported from Mexico.

The move comes in response to a growing outcry from Florida tomato growers, who have a lot of political leverage.

Florida used to dominate the American market for tomatoes sold in the winter and spring, but over the past two decades the state's growers have been losing ground to Mexico. If you pick up a ripe, red tomato in the grocery store this time of year, the chances are good it was grown south of the border.

"Depending on where you are in the country, especially at the retail level, you're going to see mostly Mexican tomatoes at this time of year," said Michael Schadler, executive vice president of the Florida Tomato Exchange, a growers trade group. Mexico now grows more than half the fresh tomatoes sold in the United States. Imports from Mexico have more than doubled since 2002.

"To me, the tomato industry is a model child of what has happened with NAFTA and free trade," said Florida grower Tony DiMare, whose family is marking its 90th year in the business. The DiMare family used to raise 5,000 acres of winter tomatoes near Homestead, Fla. This year they grew less than 600.

Florida growers have long complained that Mexico is unfairly subsidizing its tomato crop and otherwise taking advantage of the United States. But under a series of agreements dating to 1996, the U.S. government chose not to pursue protectionist measures.

Now the Trump administration is changing course. The administration served notice in February that it would withdraw from the latest agreement on May 7, clearing the way for a 17.5% tariff on Mexican tomatoes.

"This is the day we've been waiting for for a while," Schadler said.

Florida lawmakers, led by Sen. Marco Rubio and Rep. Ted Yoho, lobbied for the change. They complain that Mexico has been selling its tomatoes at artificially low prices.

Stock Markets In Turmoil Amid Uncertainty Over U.S.-China Trade Talks

"Our producers, they can't get a box, a wrapper and the seeds in the ground for what Mexico is selling it for," Yoho said.

"The Department of Commerce remains committed to ensuring that American domestic industries are protected from unfair trading practices," Commerce Secretary Wilbur Ross said in a statement. "We remain optimistic that there will be a negotiated solution."

Tariffs could be refunded if a subsequent investigation finds no unfair pricing.

But Mexican growers and the companies that import their fruit insist price is not the biggest factor behind Mexico's growing market share. Unlike Florida tomatoes that are mostly picked green, Mexican tomatoes are typically allowed to ripen on the vine. Advocates of the Mexican fruit say consumers are simply voting with their taste buds.

Amid Talk Of Tariffs, What Happens To Companies That Straddle The Border?

"Tomatoes that we see today have very good flavor. They have nice acidity. They pop when you bite into them," said Lance Jungmeyer, president of the Fresh Produce Association of the Americas, an importers group. "Back in the day, before the innovations, we had a lot of pink and mealy tomatoes that frankly didn't keep consumers coming back."

Jungmeyer argues that rather than update their farming procedures, Florida growers have sought refuge from a protectionist federal government. He warns the new import duties will raise prices and limit consumer choice.

"Duties are harmful to the American consumers," Jungmeyer said. "It's a tax on consumers. And that's the wrong way to go with fruits and vegetables."

The Trump administration has embraced tariffs on a wide variety of imports, from washing machines to solar panels. Now that Mexican tomatoes are being added to that list, Florida growers say they feel like they have an ally in the White House. And since Mexico has been expanding its exports during other times of year, growers say this is now a fight that extends well beyond Florida.

"A lot of growers who are in states that produce tomatoes in the summer — which is a lot of different states — are now saying, we certainly commiserate with our friends in Florida, because now we're being impacted by the same Mexican competition," Schadler said.

Still, Yoho says the administration might not have acted without pressure from lawmakers. Members of Congress had extra leverage because Trump needs all the support he can get to ratify his new trade agreement with Mexico and Canada.

"We voiced our opinion that if we don't get the seasonally grown vegetables straightened out, I can't support the USMCA," Yoho said, using the president's preferred name for the trade deal.

In other words, the price of a new North American free trade agreement may be tariffs on Mexican tomatoes.