Accessibility links
Calories, Carbs, Fat, Fiber: Unraveling The Links Between Breast Cancer And Diet : The Salt A new study finds that women who ate a low-fat diet and more fruits, vegetables and grains, lowered their risk of dying from breast cancer. But which of those factors provided the protective effect? 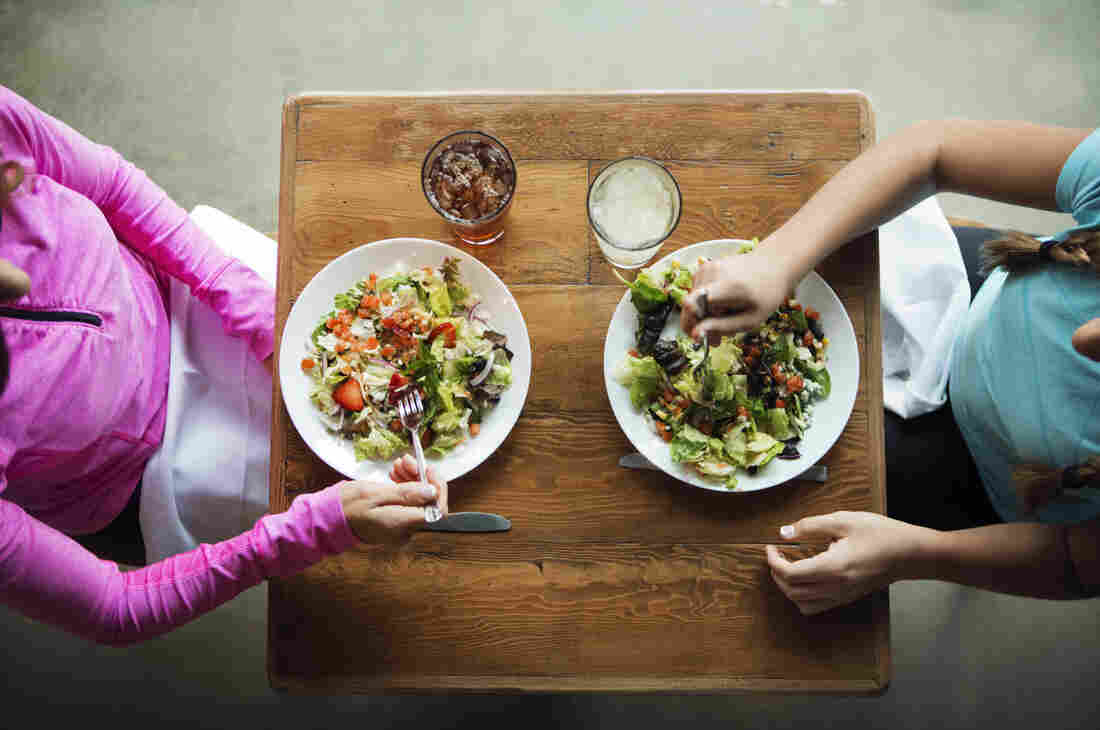 A new study finds that women who ate a low-fat diet and more fruits, vegetables and grains, lowered their risk of dying from breast cancer. But which of those factors provided the protective effect? Cavan Images/Getty Images/Cavan Images RF hide caption 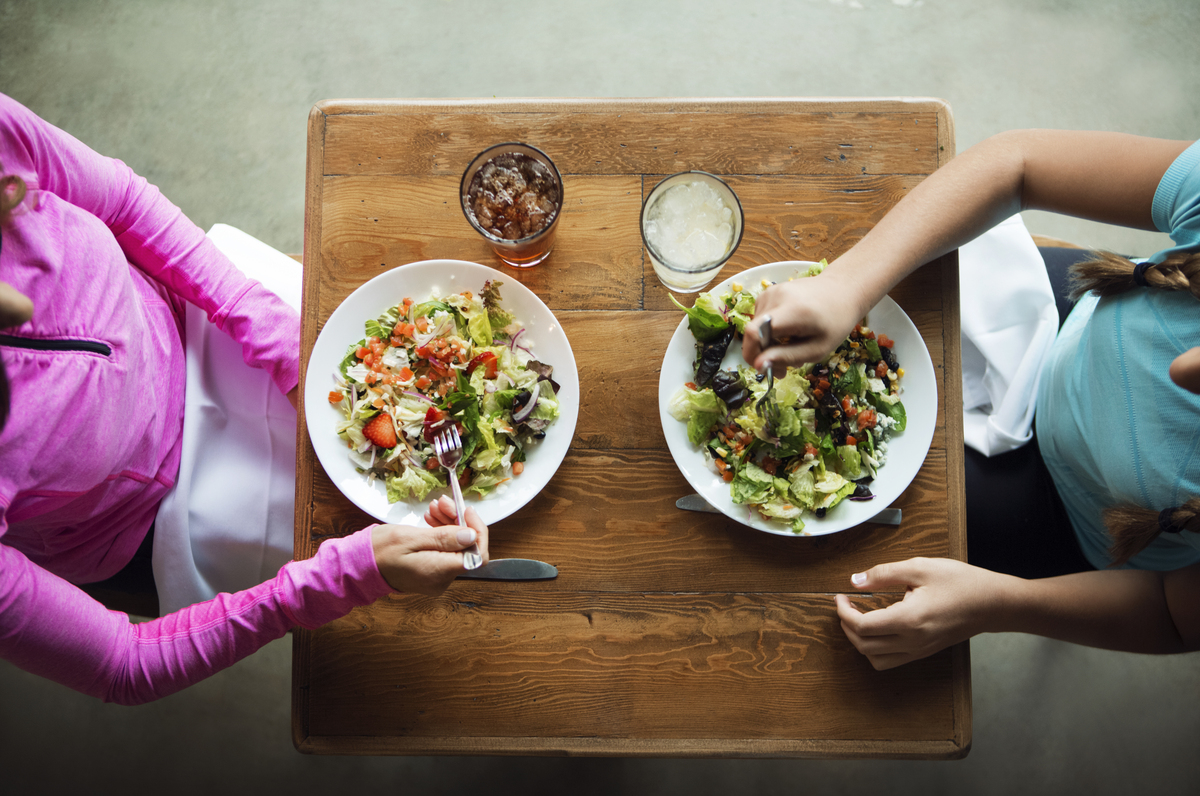 A new study finds that women who ate a low-fat diet and more fruits, vegetables and grains, lowered their risk of dying from breast cancer. But which of those factors provided the protective effect?

"A Low-Fat Diet Helps Reduce The Risk of Death From Breast Cancer." Did a headline like this catch your eye this week?

Dozens of news organizations, including NPR, reported on a new study that found that a low-fat diet helped women reduce their risk of dying from breast cancer.

The findings stem from the federally funded Women's Health Initiative, a huge, long-term, national health study launched back in 1993. At the time the study began, women who enrolled were in their 50s, 60s and 70s.

As part of the study, about 20,000 women were coached to change their diets in a number of ways for at least eight years. "We asked women to reduce their total fat intake," explains Rowan Chlebowski of the Los Angeles Biomedical Research Institute at Harbor-UCLA Medical Center. In addition, the women were asked to eat more fruits, vegetables and grains. A comparison group of nearly 30,000 women continued to follow their normal diet.

The strength of this study is twofold: its size, nearly 50,000 women in all, and its long-term follow-up, nearly 20 years. During the study, some women in both groups were diagnosed with breast cancer, but those who had changed their diets had a 21 percent lower risk of dying from the disease.

"This is significant, because this is the first intervention study targeting breast cancer where a reduction in deaths from breast cancer has been seen," Chlebowski told us.

True, these findings are significant.

But, hold on a minute: Doesn't this "low-fat" finding conflict with the current message we hear to eat plenty of healthy fats from sources such as fish, avocados, olive oil and other plant-based oils? (In fact, NPR gives this very advice in our recent Life Kit healthy eating guide.)

6 Food Rules That Could Help You Live Longer

6 Food Tips: A No-Fuss Guide To A Healthy Diet

Well, when this study was conceived in the early 1990s, it was the height of the low-fat era. Back then, the fat-free boom — with its poster child, SnackWell's cookies — even made it into a Seinfeld episode. "We really regarded fat as something we shouldn't be eating," says Jennifer Ligibel, a medical oncologist at the Dana-Farber Cancer Institute.

"There's been a lot that we've learned in the time since the study started about healthy fats and unhealthy fats," Ligibel says. We've also learned more about the effects of refined carbohydrates and sugar.

So, was it really an overall reduction in fat that helped protect against death from breast cancer? Or did the benefit come from eating more fruits, vegetables and whole grains that are full of healthy micronutrients and fiber?

The answer is: The researchers don't know.

"It is very difficult to disentangle the individual components," says JoAnn Manson, a study co-author. "The trial was designed to test reduction in total fat because the evidence at that time was ... that reducing total fat could lower risk." That was the working hypothesis.

"Now, there's much more evidence that, especially for [preventing] cardiovascular disease, the type of fat really matters," says Manson, who is the chief of the Division of Preventive Medicine at Brigham and Women's Hospital. When it comes to preventing cancer, she says, the role of dietary fat has been less clear.

"Lentils and lollipops are both low-fat," says Christopher Gardner, director of Nutrition Studies at the Stanford Prevention Research Center and a professor of medicine at Stanford University. He was not involved in the new study. "Avocados and butter are both high fat." Fat content alone does not determine whether a food is healthy or unhealthy.

"When the women [in the Women's Health Initiative study] were counseled to achieve a lower-fat diet by eating more fruits, veggies and whole grains, they were doing more than lowering fat, they were increasing fiber and nutrients," Gardner wrote via email. In other words, they were adding good things to their diets.

Gardner says he's less concerned about confusion regarding the amount and type of fat "and more interested in focusing on the overall shifts in foods and food patterns that would explain the observed 20-year health benefits, which once again, was a more plant-based diet."

Another point to consider: The women in the study who modified their diets did lose weight, on average about 3 percent of their body weight. It's possible that the reduced risk of death from breast cancer documented in the study is explained by this. It's clear that obesity is a risk factor for breast cancer, so shedding weight may be a way to reduce risk.

"The percentage of the benefit that is due to weight loss is not entirely clear," says Manson. She doesn't think it explains the whole effect.

Bottom line: The new study doesn't prove that simply lowering the amount of fat in your diet helps protect against death from breast cancer. But it fits with a growing body of evidence that a diet full of lots of fruits, vegetables and whole grains can be beneficial.

"I see it as another piece of information," Ligibel says of the new study. She says it's more evidence that diet matters. "Anytime we see that there's something people can do for themselves to lower the risk of developing cancer, or dying from cancer, that's important."

The findings of the Women's Health Initiative study on breast cancer and low-fat diets have not yet been published. Researchers will present their findings at an upcoming meeting of the American Society of Clinical Oncology.

In the meantime, Ligibel and her colleagues are enrolling women who already have breast cancer in a trial called BWEL. The study will evaluate whether a weight-loss program can reduce the risk of cancer recurrence or dying from the disease.