Accessibility links
The Lavish Roman Banquet: A Calculated Display Of Debauchery And Power : The Salt A new book profiles 10 prominent emperors who helped shape the destiny of Rome. Part of their legacy includes wild stories of hedonistic banquets, when luxury ruled even as plebeians went hungry.

The Lavish Roman Banquet: A Calculated Display Of Debauchery And Power

The Lavish Roman Banquet: A Calculated Display Of Debauchery And Power 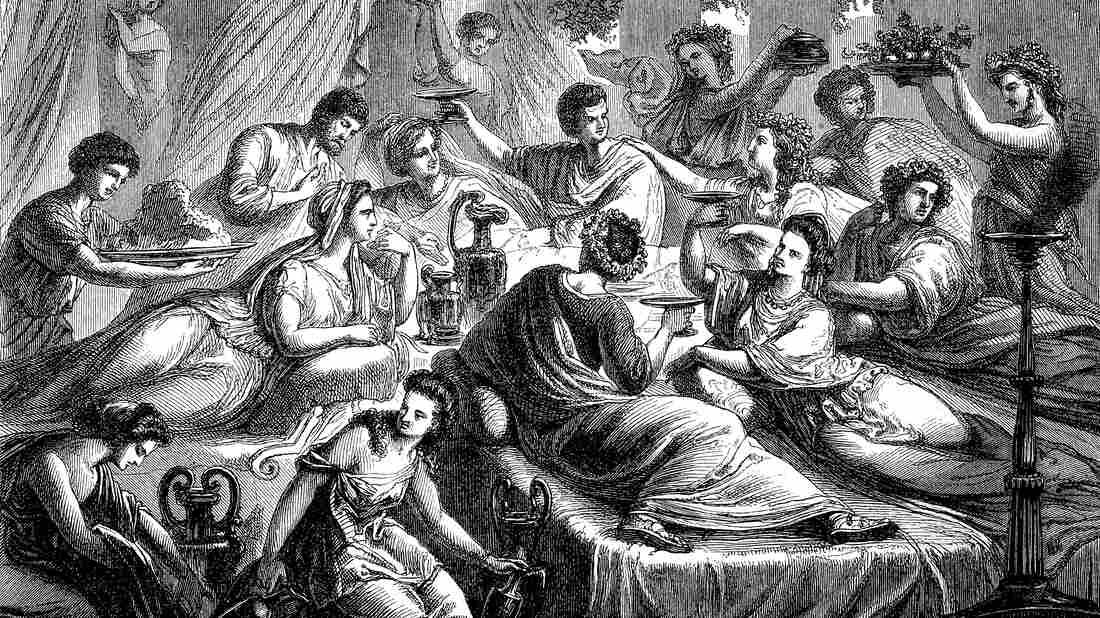 The banquet of a noble Roman in ancient Rome was more than a lavish social meal, it was a crucial power tool — a way of keeping your friends close and your enemies closer. Bildagentur-online/UIG via Getty Images hide caption 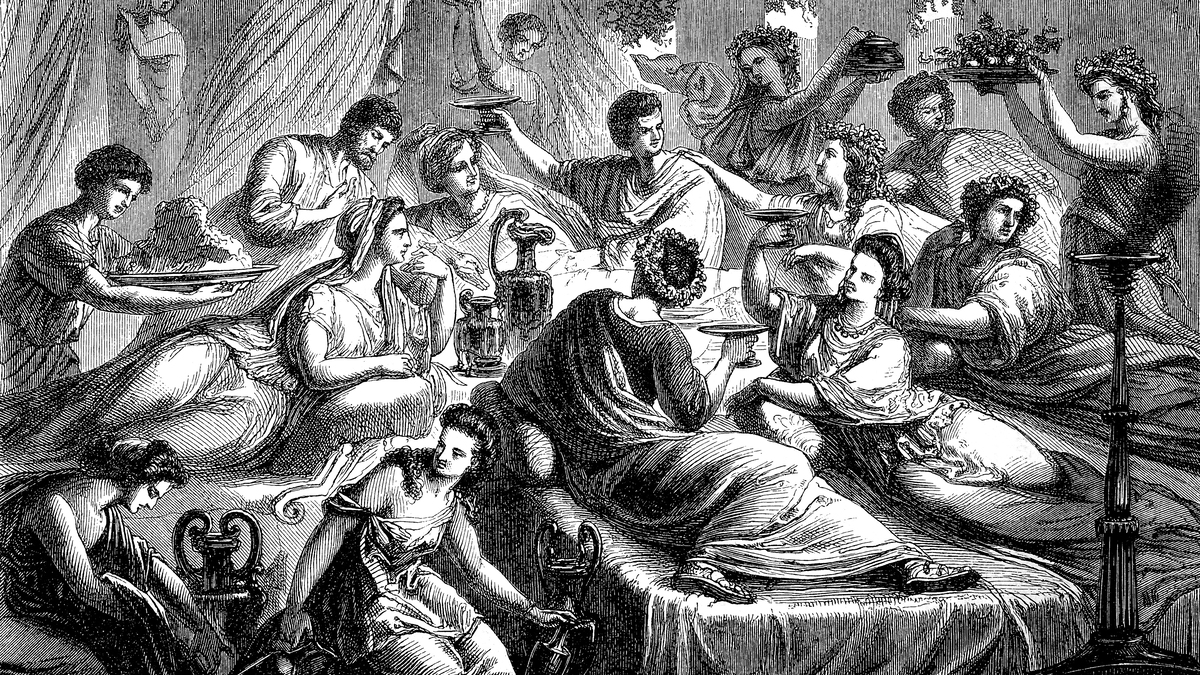 The banquet of a noble Roman in ancient Rome was more than a lavish social meal, it was a crucial power tool — a way of keeping your friends close and your enemies closer.

The Roman banquet may well have been the original staging ground of gastronomic excess — think platters of peacock tongue and fried dormice, chased down with liters of wine poured by naked waiters. But at the heart of all that gluttony was cold calculation.

For the aristocrats who ruled this sprawling ancient empire, which, at its peak under the soldier-emperor Trajan (A.D. 98 to A.D. 117), stretched all the way from Britain to Baghdad, the banquet was much more than a lavish social meal. It was a crucial power tool.

"The banquet was a chance to follow the precept of keeping your friends close and your enemies even closer," says historian and Cornell University Professor Barry Strauss. His engaging new book, Ten Caesars: Roman Emperors from Augustus to Constantine, profiles 10 prominent emperors whose policies and personality shaped the destiny of imperial Rome. "They allowed emperors to display political power and wealth, and dispense valuable favors to the invitees and monitor potential rivals. Even before there were emperors, members of the Roman elite held private banquets as a way to show off, network, reward friends and diss enemies."

And get rid of them, perhaps, by slipping a little something into their wine? "There was always suspicion of poison when a member of the elite died suddenly after a banquet," says Strauss. "For instance, the Emperor Claudius' son took sick at a court banquet and died shortly afterward. The evidence suggests natural causes, but many people at the time believed he had been poisoned on Nero's orders. The truth, however, is that poisoning was rare."

The poet Juvenal summed up the ruling formula of the Roman emperors in the cynical phrase, "Bread and Circuses," and this strategy worked not just for the rabble but for the upper-classes too. Except that in their case, "bread" applied to a dazzling range of delicacies on which they binged with a breathtaking lack of moderation. "At their hedonistic banquets," says Strauss, "Romans ate to the point of vomiting."

The Roman banquet evokes voluptuary images of men in togas reclining on couches and glutting themselves on wild sow's udders and stuffed snails, while servants stream in bearing platters heaped with heavily sauced and delicately spiced foods from all over the world: ostrich from Africa, pepper and sugar cane from India, cumin from Ethiopia, sumac from Syria, olives from Greece, and that perennial Roman favorite, the fleshy homegrown fig. Wine is drunk in copious amounts from double-handled silver cups, while a lyre plays in the background. There are performing troupes, poets, even the occasional leopard, and sometimes rose petals flutter down from on high. One sadistic host, the Emperor Elagabalus, built a banquet hall with a false ceiling that tilted open, allowing a torrent of flowers to rain down upon his unsuspecting guests, smothering to death those unable to crawl out from under the floral deluge. 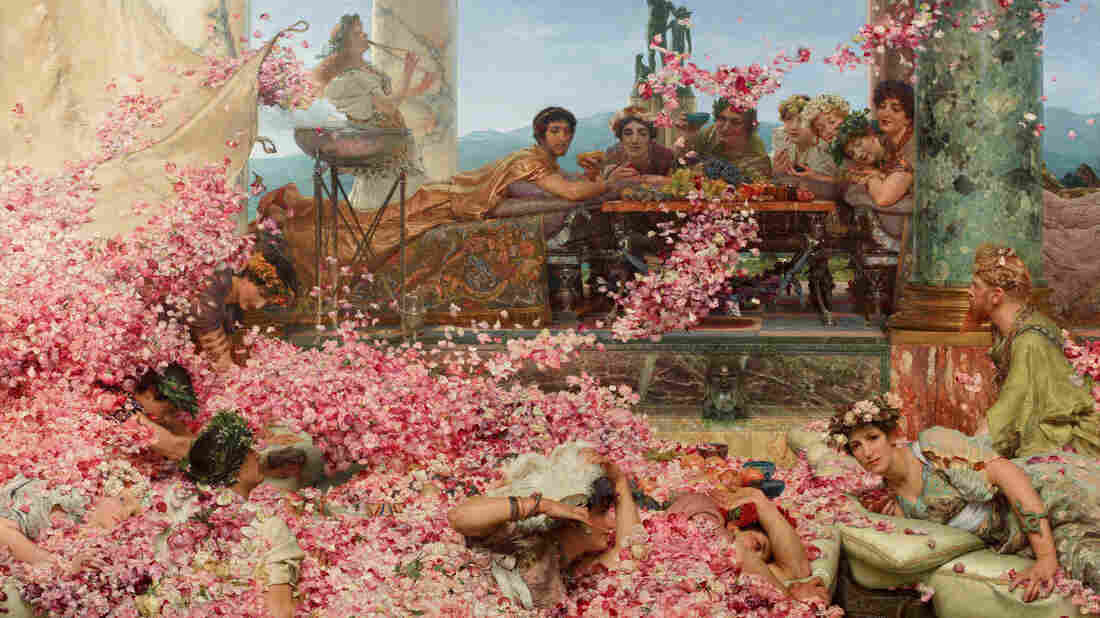 The Roses of Heliogabalus by Alma-Tadema (1888), oil on canvas. In a banquet room with a false ceiling, the Emperor Elagabalus was said to have buried his guests in violets and other flowers, so that some were actually smothered to death — the story is probably fictional. Heritage Images/Getty Images hide caption 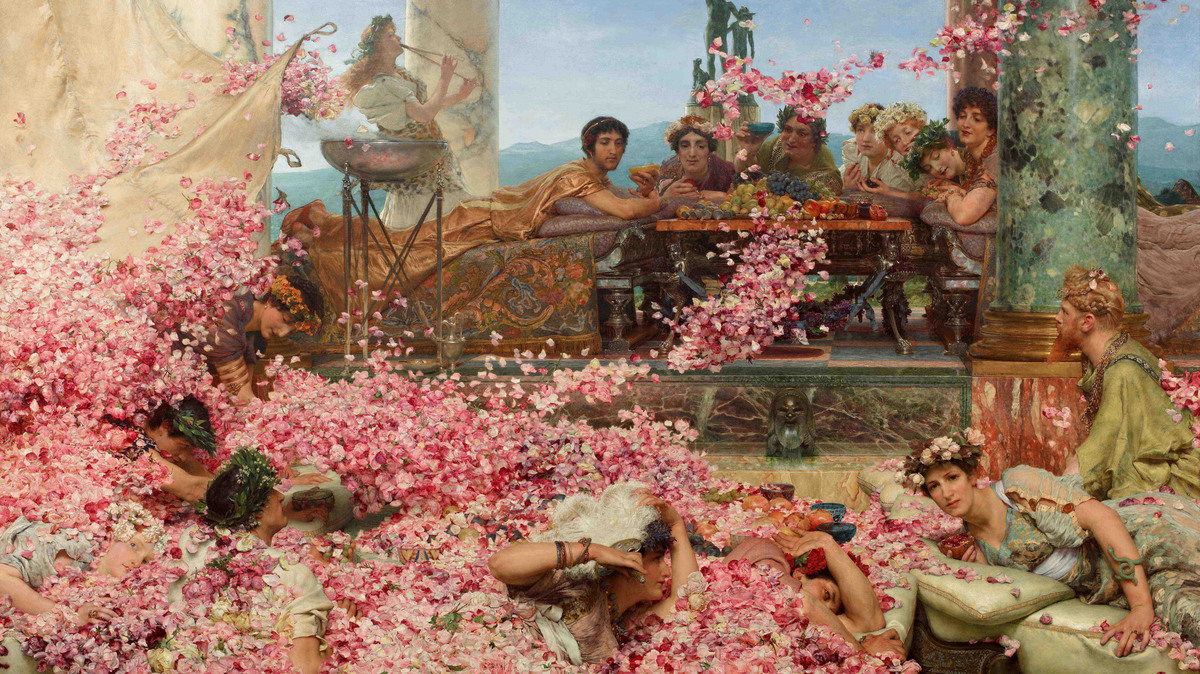 The Roses of Heliogabalus by Alma-Tadema (1888), oil on canvas. In a banquet room with a false ceiling, the Emperor Elagabalus was said to have buried his guests in violets and other flowers, so that some were actually smothered to death — the story is probably fictional.

Or so the story goes. As with many wild stories retelling Roman debauchery, this one, too, comes to us heavily sauced — or heavily perfumed in this case. What is beyond dispute, though, is that gastronomy was fetishized and raised to the level of a fine art by the Romans, and its apogee was the banquet. The Roman elite didn't believe in simply roasting an ox or a lamb on a spit. Novelty was the norm, the aim being to constantly titillate their jaded palates.

The great Roman gourmet, Marcus Gavius Apicius, who compiled what is the only surviving cookbook of the Roman empire, De Re Coquinaria (The Art of Cooking), lists more than 400 recipes for camel heels, parrot, coxcombs, venison, pheasant, thrush, rabbit, goose liver, brain-stuffed sausages, peacock, flamingo, caviar-stuffed crayfish, cranes, ostrich, ham, legumes, vegetables, and an array of seafood from sea urchins to red mullet, bass, bonito, and snails, for which special spoons were designed. 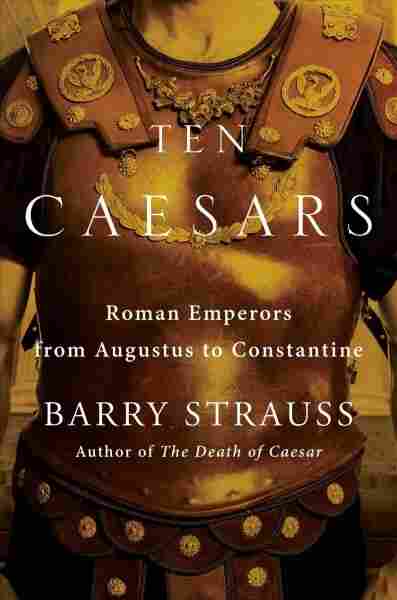 Roman Emperors from Augustus to Constantine

Apicius was a wealthy impresario, but the drachmas he poured into his extravagant banquets and obsessions — he sailed to Libya to eat the sweet shrimp he had heard so much about, only to return to his villa in Campania a disappointed man — drove him to bankruptcy and suicide. But before that, when he got a chance to host the Emperor Tiberius' sons, he served them baked honey-smeared nightingales stuffed with a prune, in a sauce made of aromatic herbs and concentrated grape juice, with a garnish of rose petals. It was two birds per guest, and the sumptuous dish was the talk of Rome. One of the most exquisite culinary legacies of this age, that we relish even today, is Apicius' pairing of sweet and savory foods, whether in the form of a honey-glazed ham or a fig-and-bacon hors de oeuvre.

Not all the Caesars were debauchees like Nero or Elagabalus. "Julius Caesar famously ate a simple diet and was relatively sober when it came to alcohol," says Strauss. "Augustus, too, drank in moderation, and it is likely that, as a philosopher-emperor, Marcus Aurelius ate and drank relatively moderately." The astute and generous Emperor Trajan was known for his passion for wine and boys, "but held his liquor and did not force himself on any lover," says Strauss, and though he entertained regularly in his country villa, his parties were praised for their "relative informality and simplicity." Trajan's successor, the intelligent, cultured and murderous Hadrian, was admired for the way he mingled with his troops and shared their rustic fare.

But for the most part, luxury ruled.

Strauss warns that the outlandish stories of revelry in the ancient texts are "famously unreliable and need to be taken with a huge grain of salt." But they make for marvelous reading. The young Elagabalus, by all accounts, was a raving libertine who swam in a saffron-scented swimming pool, served his guests rice mixed with pearls, and demanded meals all in blue or green or whatever color took his fancy. For the blue dinner, the fish had to be cooked in a bluish sauce to mimic the sea. The megalomaniacal Nero will always be associated with nibbling on peeled grapes and fiddling while the city burned. Whether or not he did is hard to prove, but recent archaeological findings have unearthed the foundations of his fabled circular banqueting hall, that, according to the historian Suetonius, "constantly revolved day and night, like the heavens."

One of the most macabre banquet stories, perfect for a Halloween party, is of the black banquet thrown by the Emperor Domitian, known for his cruelty but also for rebuilding Rome. He swathed his hall in black, had all the food dyed black, and placed each quaking guest beside a gravestone with his name on it. The guests thought they would never make it out alive, especially since Domitian talked about slaughter all through the meal, but it turned out to be a diabolical prank, and after reducing his guests to a gibbering mess, the emperor sent them home and showered them with gifts.

The most legendary Roman banquet, says Strauss, is the fictional Cena Trimalchionis (Dinner of Trimalchio) in Petronius' satirical novel, Satyricon. "In the novel, Trimalchio is a freedman (ex-slave) who has made it rich," says Strauss. "Petronius was a Roman noble who, like other members of his class, looked down on upwardly mobile non-nobles. So he laid it on thick in his description of the excesses of the banquet." Trimalchio was the Great Gatsby of his time, and F. Scott Fitzgerald's novel makes a reference to him.

It was when curiosity about Gatsby was at its highest that the lights in his house failed to go on one Saturday night — and, as obscurely as it had begun, his career as Trimalchio was over.

Petronius' descriptions of Trimalchio's banquet with its pastry eggs stuffed with the unborn embryo of a bird are similar to those of Gatsby's buffet table with its "pastry pigs and turkeys bewitched to a dark gold."

Outside the patrician mansions and saffron-flavored swimming pools, the plebeians lived in overcrowded tenements and ate frugally. Food inequality was as endemic to ancient Rome as it is to our world today, with hunger and hedonism coexisting through the empire. "Ordinary Romans ate bread, porridge, and fruit and vegetables (in season)," says Strauss. "They also ate dates and honey. Cheese was relatively available too. A fish sauce called garum was very popular and served as a substitute for salt. Ordinary people could rarely afford meat or fish, while the rich had a fair supply of both."

Bread in the form of pancakes was available throughout Rome, and street vendors sold olives and other viands for a quick midday snack. Soldiers were sustained on their long marches by lentils, chickpeas, dried vegetables and cheese. Nothing was wasted as evidenced from the ubiquitous fermented garum, made from the heads and leftover innards of fish.

"With a population of one million people, the city was hard to feed," says Strauss. "We know of 19 food riots in ancient Rome, and there were surely other ones that haven't left a documentary record." During one such riot in the Forum in A.D. 51, caused by a prolonged drought, the Emperor Claudius had to flee for his life. "The riot concerned a shortage of food," says Strauss. "Or perhaps it was only the threat of a food shortage, since the crowd threw bread crusts at Claudius: If they were really starving, they probably would have eaten those crusts. At any rate, in response, Claudius made an extra effort to import grain in order to feed the populace."

The main sources of grain for the city of Rome were North Africa and Egypt. When Vandals conquered these vital grain-providing provinces in the 5th century, they cut off Rome's food supply, dealing a death blow to an empire already weakened by years of dissipation and infighting. No grain meant no bread, no banquets, no games, and ultimately, no Empire.