When Tea Reaches Its Boiling Point In Fiction, So Too May The Story

When Tea Reaches Its Boiling Point In Fiction, So Too May The Story 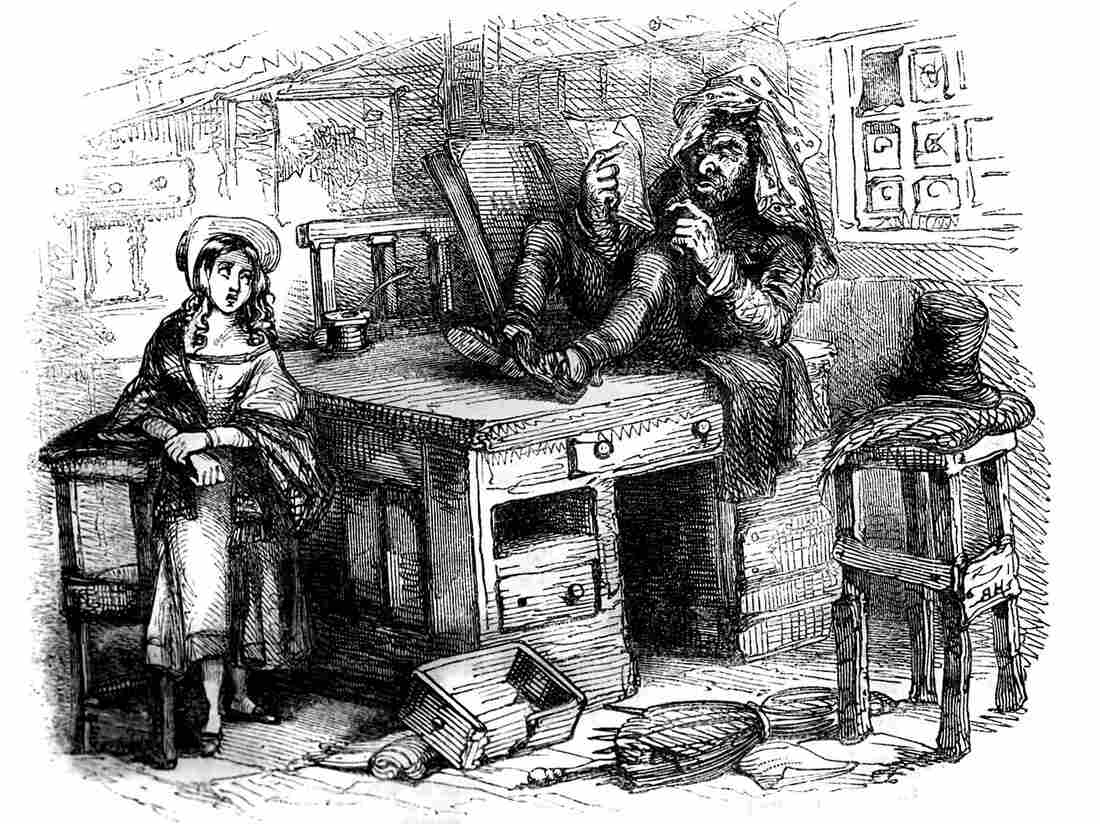 Quilp, the epitome of evil in Charles Dickens' The Old Curiosity Shop, seen here with Little Nell, is a dwarf with the head of a giant and a "few discolored fangs" for teeth. But his most grotesque trait is his trick of drinking "boiling tea without winking" and eating "hard eggs, shell and all." Culture Club/Getty Images hide caption 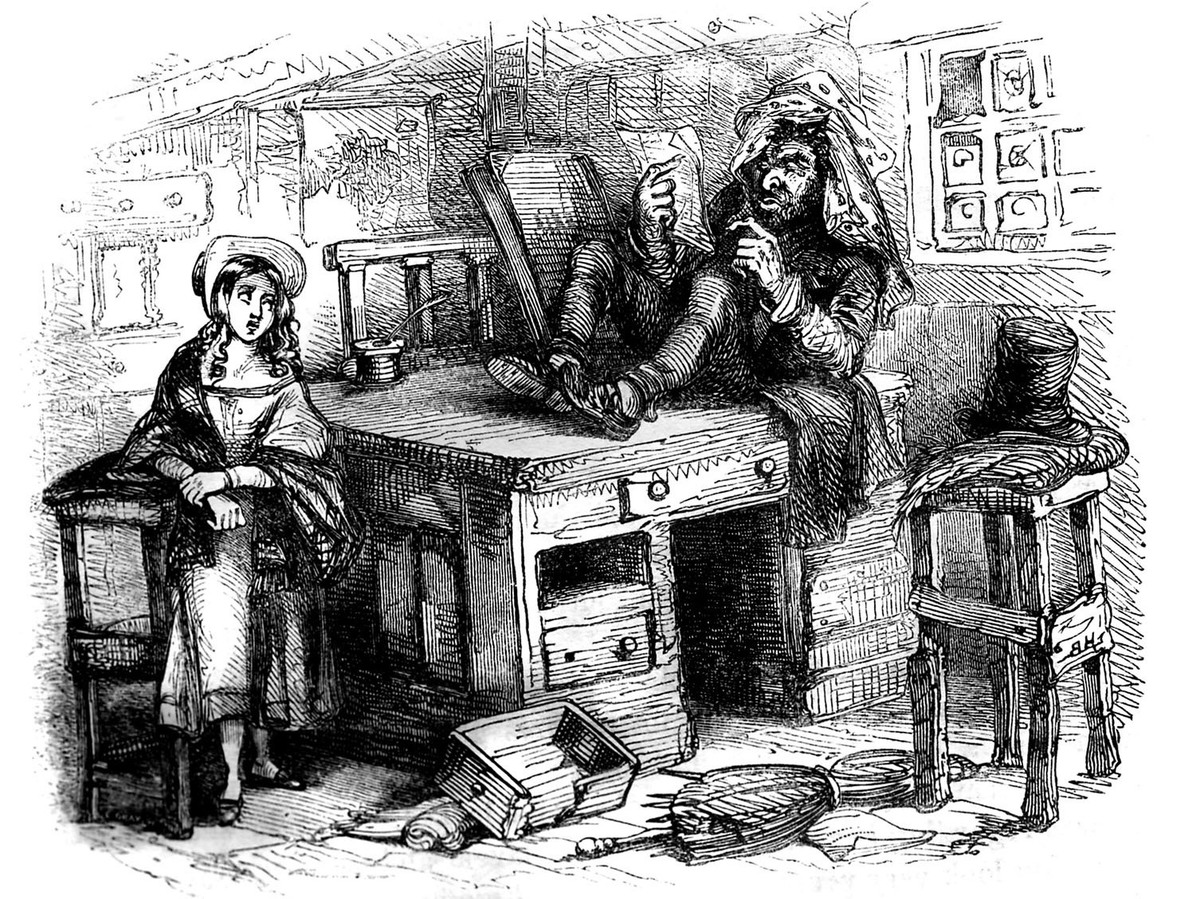 Quilp, the epitome of evil in Charles Dickens' The Old Curiosity Shop, seen here with Little Nell, is a dwarf with the head of a giant and a "few discolored fangs" for teeth. But his most grotesque trait is his trick of drinking "boiling tea without winking" and eating "hard eggs, shell and all."

A recent study in the International Journal of Cancer revealing a link between hot tea and the risk of esophageal cancer has provoked a range of reactions — from concern and vindication (for those who've long warned family and friends about the dangers of ingesting boiling liquid) to mockery (Not one more study!) to outright defiance. (You can pry that hot cuppa from my cold, dead hands.)

Hardened habitués were inclined to treat the study with the same solemnity as did the great Victorian limericist Edward Lear when he wrote:

There was an old man who forgot,

That his tea was excessively hot;

When they said 'Let it cool'

He answered 'You fool!

I shall pour it back into the pot.'

The warning is no laughing matter — esophageal cancer is the world's eighth most common cancer, and this finding affects millions of tea-drinkers. But the defensiveness that greeted it was scarcely surprising, since it imperiled one of the most intimate, ingrained and pleasurable habits known to mankind — that first scorching sip of morning tea.

Hot tea — it has to be unhealthily hot — has a deep emotional relationship with the drinker. Its dimensions encompass far more than the gustatory, starting with its magical ability to get chronic malingerers out of bed every morning. That first chastising sip constitutes a tiny tour de force of hope that, like a tingling hot bath, cauterizes other pains. Those grieving the loss of a loved one have found that hot tea can seep into places that, to quote poet William Wordsworth, "do often lie too deep for tears."

Coffee Or Tea: In Dickens' World, It Might Be A Choice Between Good And Evil

And what more villainous character than Quilp, the epitome of evil in Charles Dickens' The Old Curiosity Shop? Quilp is a dwarf with the head of a giant and a "few discolored fangs" for teeth. But his most grotesque trait — and a fine example of Dickensian éclat — is his trick of drinking "boiling tea without winking" and eating "hard eggs, shell and all." He resorts to these dietary stunts to terrorize his wife and mother-in-law, succeeding only too well in frightening the women half to death so that they begin "to doubt if he were really a human creature."

Sinister in a more ambient way is the boiling tea in Daphne du Maurier's gothic classic Rebecca. At the country manor Manderley, afternoon tea is an elaborate affair served on a tea table covered with a snowy-white tablecloth: "Tiny crisp wedges of toast, and piping-hot, flaky scones. Sandwiches of unknown nature, mysteriously flavoured and quite delectable, and that very special gingerbread. Angel cake, that melted in the mouth, and his rather stodgier companion bursting with peel and raisins." But the tea itself, for some reason, is always scalding. It unsettles the already anxious narrator, the second Mrs. De Winter, who is the new mistress of Manderley and is forever comparing herself to her predecessor, the beauteous and wicked Rebecca. When they have guests over to tea, she has to do the honors, and is in a state of high nerves at having to handle the "monstrous silver tea-pot and kettle." In another scene, when she calls on her husband's querulous grandmother, who pretends not to know who she is and demands to meet "dear Rebecca," the tea is once again unpleasantly hot, adding to the malignant suspense that builds steadily to the novel's blazing finale.

The Real 'Favourite' Of Queen Anne's Era? Tea, And The Gossip That Swirled Around It

A work that rings with cries of "tea quick, please" to tragicomic effect is Fyodor Dostoevsky's strange novella, The Eternal Husband. This cat-and-mouse psychological tale explores the fraught relationship between two men, one of whom, Velchaninov, used to be the lover of the other man Trusotsky's, now dead wife. One night, Velchaninov is gripped by mysterious and agonizing pains, and Trusotsky, with an almost demented fervour, forces him to drink "two or three cups of very hot weak tea — boiling hot" as a sureshot remedy. In hysterical tones, he urges him, "Drink this tea quick — never mind if you scald your tongue — Life is drearer. You can die of this sort of thing, you know." Why would the cuckold administer to the sufferings of the man who has wronged him? Trusotsky's concern is genuine but it has an edge. Sure enough, though Velchaninov feels better after the tea and falls asleep, he wakes up to find Trusotsky standing over him in the dark, razor in hand. The nurse has turned assassin, with the passive aggression simmering inside reaching boiling point.

As intense, but with a comic-erotic charge, is the scene that unfolds in Palace Walk, Naguib Mahfouz's first novel in his Cairo trilogy. The libertine Yasin — magnificently described as having "the body of a bull and the elegance of a peacock"— is throbbing with lust for the beautiful lute player Zanuba. As he sits in a coffee shop across from her house desperately hoping for a glimpse of her, he is in such a fever of "apprehension and anxiety" that he "forgot what he was doing and drank hot tea without waiting for it to cool." He burns his mouth and feels foolish, but the real scorcher comes a little later, when Zanuba, preceded by her long red lute case, finally emerges. When he first sees her, Yasin "craned his neck and gulped" — the hot gulp of her, which mimics the action of his tea-drinking, sears him all over again, for as he later muses to himself, "Desire's a fire."

One reason for tea's global appeal is its extraordinary ability to both warm you up on a cold day and cool you down on a hot one. The warming one up is straightforward enough. The scalding salted and buttered tea of Tibet provides its people with a boost of energy needed to battle the mountain cold, and the wintry Russian stories of Leo Tolstoy, Dostoevsky and Anton Chekhov are full of characters drinking steaming tea accompanied by a lump of sugar.

But in more torrid climes, too, hot tea is relished for its cooling effect — something Arianna Huffington discovered when she was a student in India studying comparative religions. Scorching hot tea is drunk in India, China, Pakistan, Turkey, Afghanistan, Iran and the Middle East through the broiling summer months. Gangadhar Gadgil in Crazy Bombay, a collection of humorous sketches on the city, writes, "If, in spite of all these odds heavily stacked against him, the Bombayite flourishes, that is only because of the several cups of strong and scalding tea that he pours down his throat." And a character in Ha Jin's The Crazed remarks that unlike fake stuff like pomegranate tea, nothing can "help relieve internal heat like real tea."

For gentler emotional journeys, though — such as the soothing bath of nostalgia — a lower temperature seems more suitable, as in that celebrated moment when Marcel Proust dipped his madeleine into his cup of warm tea: "No sooner had the warm liquid mixed with the crumbs touched my palate than a shudder ran through me and I stopped, intent upon the extraordinary thing that was happening to me ... The sight of the little madeleine had recalled nothing to my mind before I tasted it. And all from my cup of tea."

Proust's tea is warm and comforting. But when you're being pursued by Death Eaters, it's time to kick things up a notch. In J.K. Rowling's final Harry Potter novel, The Deathly Hallows, Harry, Hermione and a grievously injured Ron, find themselves in a wood, and on the point of despair. But then they pitch a tent and Hermione makes tea. "Harry found the hot drink ... seemed to burn away a little of the fear fluttering in his chest." What an excellent verb to employ — "burn away"— to capture the power of hot tea to singe the edge of fear and how reassuring that it works its magic even on brilliant boy wizards.

And on the war-weary soldiers, too. Major Jimmy Ross, the English hero of Len Deighton's City of Gold, a WWII thriller set in Cairo, feels equally bleak with German General Erwin Rommel's armies advancing on the city. After a particularly awful call with his superior officer, he puts down the phone, emits a heartfelt sigh, and surrenders to an antidote that his adjutant Ponsonby has long championed and that he has long resisted:

'I'm ready for a large cup of that filthy tea you brew out there.'

'I thought you might be, sir. I have one here, nicely drawn and all ready to pour out.'

Ponsonby was right. There were times when a large cup of scalding-hot tea, tasting of condensed milk, was the only alternative to jumping off the balcony.