Accessibility links
Organic Farms Use Plastic Mulch For Weed Control; 1 Solution Is Controversial : The Salt Many organic farmers rely on plastic as a form of mulch, but it ends up in landfills. Biodegradable plastic could help, but some worry about its long-term effects on soil health and the environment. 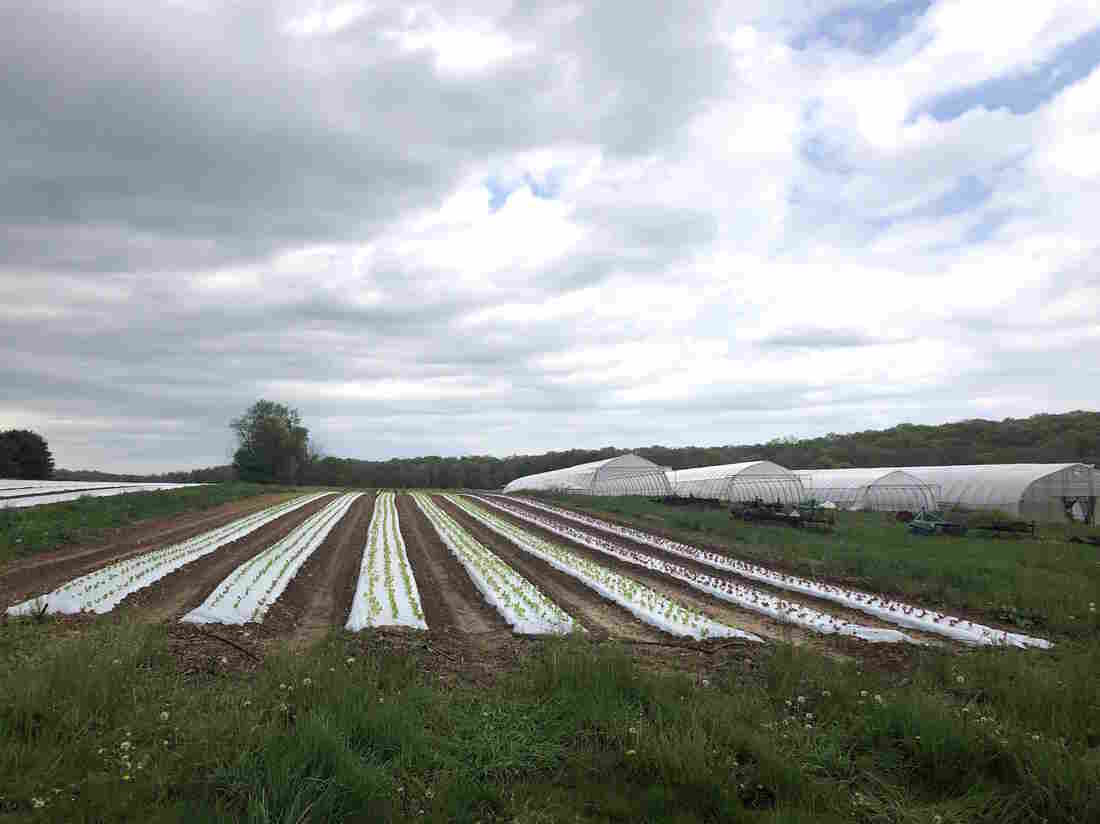 Lettuce sprouts amid rows of plastic covering the ground at One Straw Farm, an organic operation north of Baltimore. Although conventional farmers also use plastic mulch, organic produce farms like One Straw rely on the material even more because they must avoid chemical weed killers, which are banned in organic farming. Lisa Elaine Held/NPR hide caption 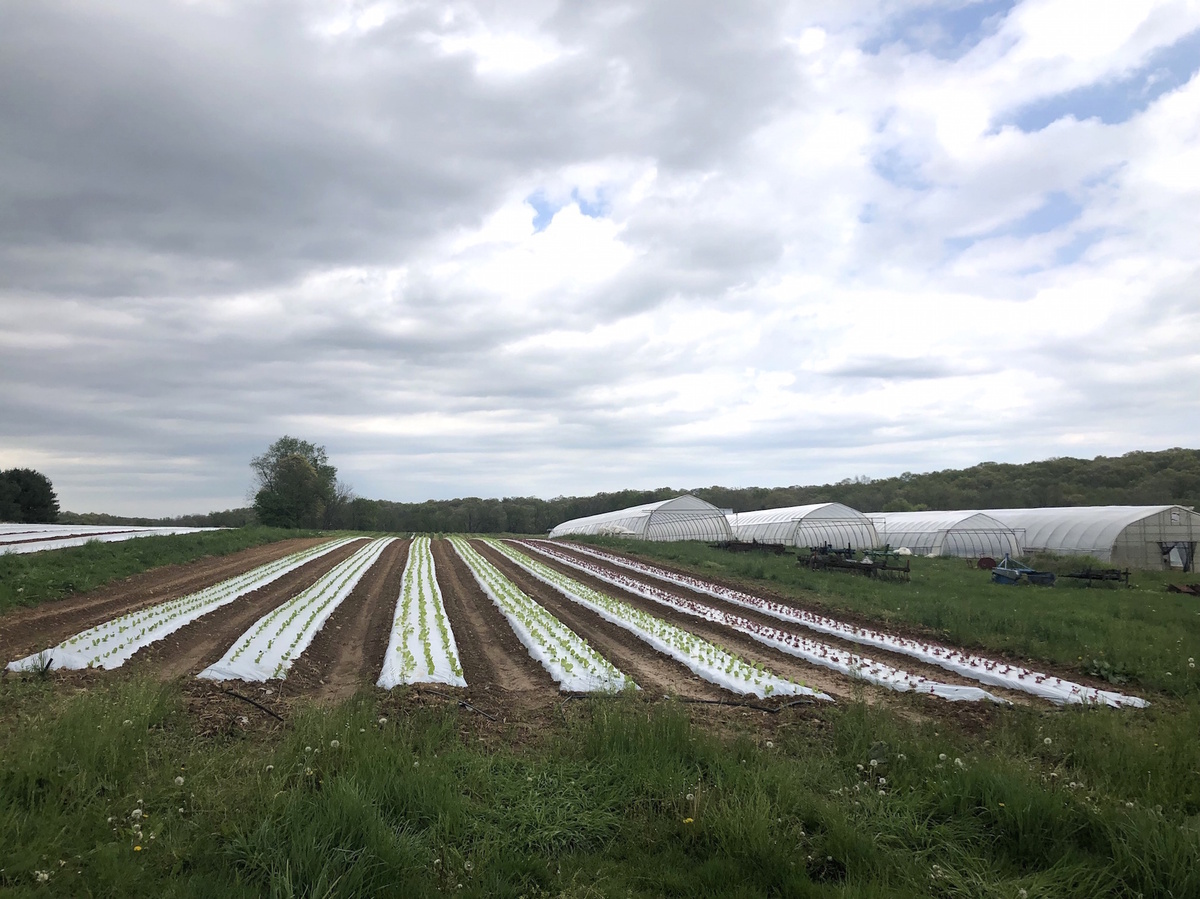 Lettuce sprouts amid rows of plastic covering the ground at One Straw Farm, an organic operation north of Baltimore. Although conventional farmers also use plastic mulch, organic produce farms like One Straw rely on the material even more because they must avoid chemical weed killers, which are banned in organic farming.

Drew and Joan Norman have been producing organic vegetables on 60 acres just north of Baltimore since 1983. On a recent spring day, signs of another new season at One Straw Farm were everywhere: seedlings in the greenhouse waiting to be transplanted, asparagus ready to be picked, tiny leaves of red- and green-leaf lettuce sprouting out of the ground — and rows and rows of plastic covering the ground on each field.

Plastic is under attack these days for the environmental problems it causes. But sustainability-minded shoppers might not be aware that many organic farmers — like their conventional farming neighbors — also rely on plastic. It's spread over the ground as a form of mulch to suppress weeds, conserve water and aid plant growth.

Explore more of our reporting on plastic waste in our environment.

At One Straw, the plastic film used on just 30 productive acres in one year would stretch 36 miles in a straight line. Bigger organic operations like Lady Moon Farms, with farms in Pennsylvania, Georgia and Florida, spread it over thousands of acres. And when the season is over, it ends up in landfills.

Many organic farmers would love to find an alternative to plastic, but they say there isn't one at the moment. One conceivable solution, biodegradable plastic, isn't allowed under organic rules in its current form, though some think those rules should be changed. Others worry about the long-term effects of biodegradable plastic on soil health and the environment.

"We're looking at it in a bigger way than just, 'Is it biodegrading?' We need to make sure that what we're putting into the soil will have a positive and not a negative effect," said Harriet Behar, chairwoman of the National Organic Standards Board (NOSB), which advises the U.S. Department of Agriculture on organic regulations.

Why plastic is popular

Spread over fields with giant rollers and held down with soil, the flat plastic blocks sunlight from hitting the ground and stimulating weed growth. That way, plants like tomatoes, set within a hole punched in the plastic, can grow unimpeded. Although conventional farmers use the material, organic produce farmers rely on it even more since they must avoid chemical weed killers, which are banned in organic farming.

"The hardest part about organic [farming] is weed control," said Larry Tse, farm manager at Dig Inn farm in the Hudson Valley region of New York, where weeds grow quickly thanks to fertile black dirt. Tse uses plastic mulch on all of his produce beds and helps neighboring farms lay plastic on their fields.

In addition to weed control, plastic works well with drip irrigation, a system that conserves water by delivering it directly to plant roots through a network of thin plastic tubes snaking beneath the mulch. "The water savings, in gallons per acre, is like 60 percent compared to using sprinklers," said Drew Norman of One Straw Farm.

The plastic also moderates soil temperature in ways that increase yields and season length for farmers. "We use plastic mulch on all our acreage," said Tom Beddard of Lady Moon Farms, a massive organic grower of supermarket vegetables. "It's for weed control and soil warmth, and heat-loving crops — like tomatoes, peppers and eggplants — will mature weeks earlier on plastic versus bare ground."

Yet there is the nagging issue of waste. Both Tse and Beddard said they had found companies to recycle their agricultural plastic for short periods of time in the past, but the operations had never lasted long. Instead, at the end of the season, the vast majority of the plastic is lifted from the ground and loaded into dumpsters, where it is taken to landfills, amounting to a major cost and labor challenge for farmers. Plus, Drew Norman said that work can interfere with other tasks, such as sowing grain and legume "cover crops" in the fall, which protect and enhance the soil through the dormant winter months.

That's why so many farmers want an alternative. Although natural mulches like straw and paper that break down in the soil do exist, they are too costly or labor-intensive for many farmers. But if a plastic mulch could slowly degrade over the course of the season, disappearing into the field and eliminating waste, it would amount to a dream solution.

Right now, however, no such solution exists for organic farms, because the biodegradable plastic mulches on the market all contain petroleum-based materials. In 2014, the USDA's National Organic Program (NOP), which implements and oversees organic regulations, specified that any biodegradable mulch could only be used if it was 100 percent "bio-based" — that is, made entirely from plant materials.

Since then, the USDA has received "considerable feedback" from organic farmers and mulch manufacturers on the topic, a USDA spokesperson said in response to emailed questions. According to the spokesperson, two researchers presented on the topic at the last NOSB meeting in April 2019 and farmers have expressed ongoing interest.

BASF, the agrochemical giant, has been sending representatives to NOSB meetings to argue for the use of its product, Ecovio, a popular biodegradable plastic mulch used by farmers around the world, in certified organic farming. It said a study published in 2018 shows that the product fully biodegrades.

While that study was supported by BASF, additional independent research points to similar conclusions, says Jennifer DeBruyn, an associate professor in Biosystems Engineering & Soil Science at the University of Tennessee's Institute of Agriculture. "Our main conclusion is we're not seeing strong effects of these mulches on soil health parameters, soil health indicators, or soil microbial communities," she said, referring to a study recently published by her team as part of a biodegradable plastic mulch research project.

But the group has analyzed only two-year field trials so far. "A lot of times, soil parameters can take years and years to change and shift, and so I think there are still a lot of questions on what the long-term effect is going to be," DeBruyn says.

For now, that hesitancy around unknown long-term effects is shared by members of the NOSB, Behar said, although the topic is on the board's work agenda for 2019. She is also hopeful that a company would bring a synthetic bio-based mulch to market — one that acts like plastic but doesn't contain any petroleum-based materials and so would be approved for use in organic farming. She believes that scenario is close at hand, based on public comments at NOSB meetings.

Meanwhile, this season's tomato plants are getting taller, and the Normans, for one, would rather not wait another season for permission to use available biodegradable mulches, even if they contain petroleum. "We have no doubt that at some point it will be 100 percent bio-based and are looking forward to that," Joan Norman said. "But until that point ... it is certainly a better choice than putting dumpsters of plastic in a landfill. It's a lot of plastic."

This story was produced in collaboration with the Food & Environment Reporting Network, a nonprofit investigative news organization.

Lisa Elaine Held is a reporter who covers the intersections of food, agriculture, health and the environment.