Accessibility links
We Drink Basically The Same Wine Varietals As Ancient Romans, And That's Not So Great : The Salt Many of today's most popular wine varietals are extremely genetically similar to wines that may have existed for thousands of years, a new study finds. In the face of climate change, that's risky.

We Drink Basically The Same Wine Varietals As Ancient Romans, And That's Not So Great

We Drink Basically The Same Wine Varietals As Ancient Romans, And That's Not So Great 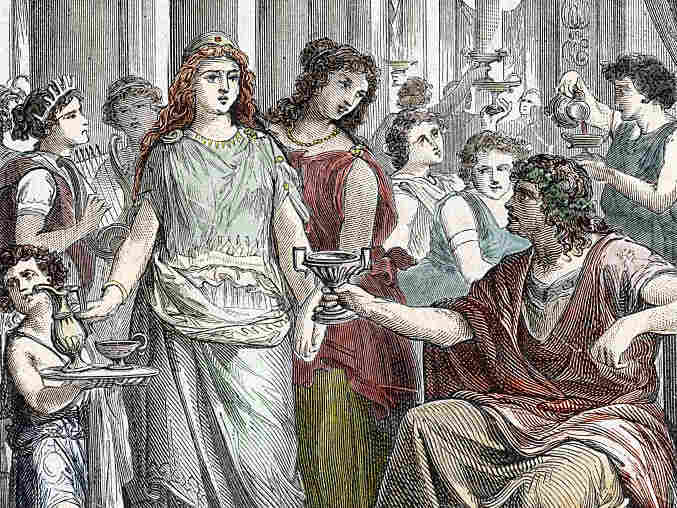 An engraving shows Galla Placidia (390-450), daughter of Roman Emperor Theodosius I, in captivity. New research shows that in some cases, we are drinking almost the exact same wine that Roman emperors did — our pinot noir and syrah grapes are genetic "siblings" of the ancient Roman varieties. Leemage/Corbis via Getty Images hide caption 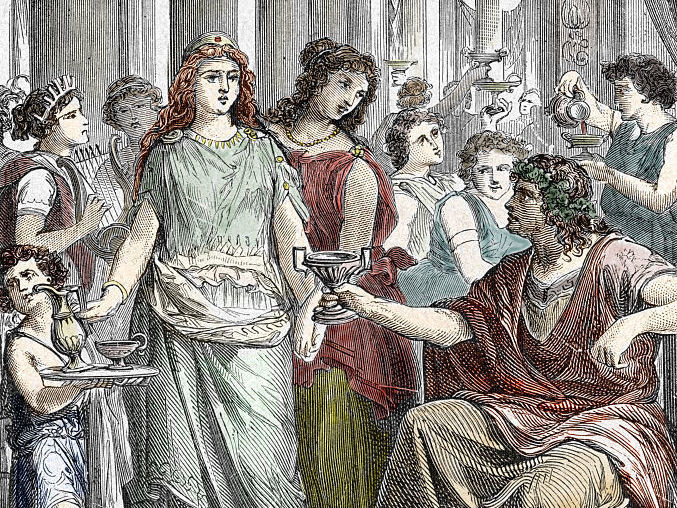 An engraving shows Galla Placidia (390-450), daughter of Roman Emperor Theodosius I, in captivity. New research shows that in some cases, we are drinking almost the exact same wine that Roman emperors did — our pinot noir and syrah grapes are genetic "siblings" of the ancient Roman varieties.

But until now, nobody knew just how ancient the wine varietals we've been drinking are. According to a new study in Nature Plants published Monday, many of the most popular wine varietals sold today are extremely genetically similar to the wines that ancient Romans drank — and may have existed for thousands of years longer.

To determine the genetic lineages of the wines they studied, researchers collected 28 grape seeds from nine ancient archaeological sites in France. There's evidence the seeds date back 2,500 years. They then analyzed the grapes' genes and compared them with modern grape varieties — something that hadn't been done before and required a cross-disciplinary effort by ancient-DNA researchers, archaeologists and modern-grape geneticists.

Of the 28 ancient seeds that the researchers tested, all were genetically related to grapes grown today. Sixteen of the 28 were within one or two generations of modern varieties. And in at least one case, the researchers found evidence that consumers are drinking wine from the same grapes, or a direct relative, as medieval Frenchmen 900 years ago: the rare savagnin blanc (not to be confused with sauvignon), a light, floral white varietal with rigorous growing standards and a small range of cultivation in eastern France.

In other cases — for example, with pinot noir and syrah grapes — we are using grapes that are genetic relatives of those used to make wine during the Roman Empire.

The researchers' findings demonstrate just how enduring wine consumers' tastes can be and how careful winemakers have been in preserving popular and enduring grape varieties, according to Nathan Wales, a study co-author and a lecturer at the University of York who specializes in paleogenomics (the study of ancient DNA).

"It's incredibly likely that someone 1,000 years ago was drinking something that's pretty much genetically identical to what we drink today," Wales says. The research did not assess whether ancient and modern wines actually tasted the same. Techniques for fermenting, storing and bottling wine have all changed over the centuries, all of which can affect the taste. The yeast used to ferment wine has also changed.

But wait. Living things evolve, right? Yes, and domesticated wine grapes have, too — but in some cases, we've slowed down this evolution by propagating the vines through cuttings. Growers cut off a piece of the wood and replant it. In this way, they essentially create a genetic clone of the original plant. The new vine is almost genetically identical to its parent, with the ineffable qualities that make it a merlot or pinot grigio.

Zoë Migicovsky, a postdoctoral researcher at Dalhousie University in Canada who specializes in apple and grape genetics and who was not involved in the study, calls the research "fascinating."

"[These grapevines have] been around for hundreds and hundreds of years, but everything around [them] has continued to change," she says.

But, she says, the research also reveals a deep vulnerability in wine cultivation — our own obsession with pedigree and timelessness.

As the environment changes around these wine varieties, they have limited genetic diversity, which could render them susceptible to ever-evolving pests, pathogens and extreme weather. "If these varieties are genetically [similar] all over the world ... it means they're all susceptible to the same pests and diseases as well," Migicovsky says. "We [may] need to use more chemicals and sprays in growing [them]" as threats advance.

A big part of Migicovsky's research involves the resilience of wine — how to breed sturdier grapes, ones that can withstand the environmental changes we're going through now as a result of climate change. Warming temperatures may increase the strength of certain pests and pathogens. And extreme weather events may hit the wine industry hard, she says. For instance, just recently in her home province of Nova Scotia, Canada, a frost "devastated" the wine industry. "We're going to see more and more of that now," she says.

But this doesn't mean all wines are doomed. "There is a lot of diversity in grapevines," Migicovsky says. "We can breed varieties that are more tolerant and resistant for our current environment." Tastes can change and evolve, and new grapes could display a magnificent array of tastes and textures to rival the ones we have now, Migicovsky believes. And who knows? Maybe wine lovers will discover a hardier grape that we love the taste of even more than a pinot or merlot.

An earlier version of this story incorrectly stated that the genes of certain domesticated grape varieties are frozen in time. In fact, domesticated grapes have evolved, though in some cases, humans have slowed down this evolution. The original story implied that limited diversity among grape varieties will cause the wine industry to fail; more accurately, this could be a problem for the industry. The story and headline have also been clarified to say that while many modern wine grape varieties are genetically similar to those in ancient times, fermenting, bottling and storing techniques have all changed, all of which can affect the taste of wine.