Accessibility links
Why Food Reformers Have Mixed Feelings About Eco-Labels : The Salt Grocery stores are full of food with labels like organic, cage-free or fair trade that appeal to a consumer's ideals. But there's often a gap between what they seem to promise and what they deliver. 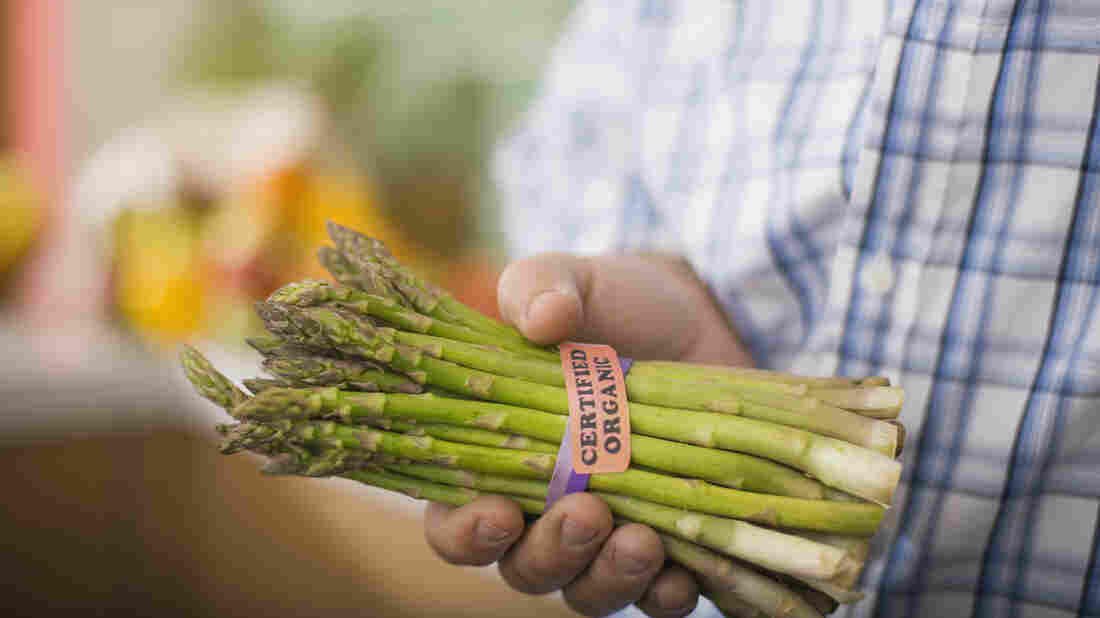 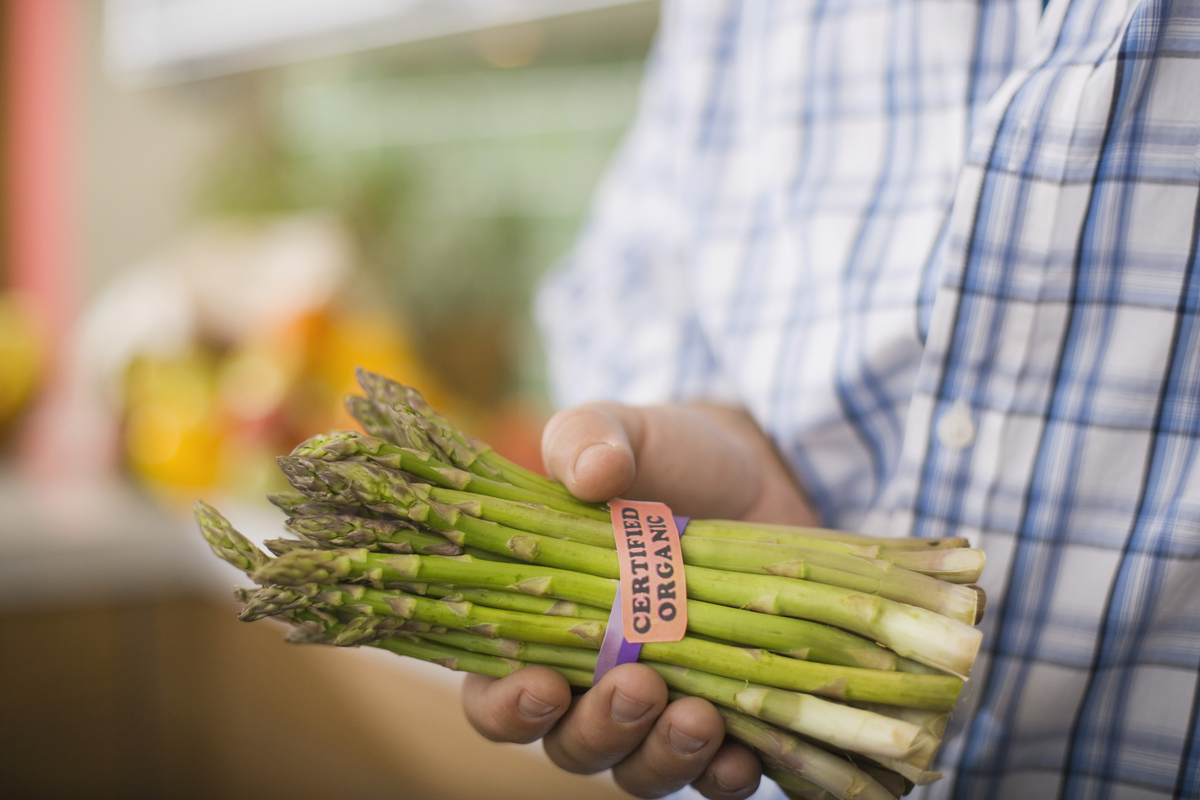 Take a walk through the grocery store; the packages are talking to you, proclaiming their moral virtue, appealing to your ideals: organic, cage-free, fair trade.

When I dug into the world of eco-labels recently, I was surprised to find that some of the people who know these labels best are ambivalent about them.

Take Rebecca Thistlethwaite, for example. She has spent most of her life trying to build a better food system, one that's good for the environment and humane for animals. Right now, she directs the Niche Meat Processor Assistance Network, which helps young farmers figure out how to make a living at it.

"I would never do away with labels. I think farmers need to be able to tell their story," she says. The words "organic" or "pasture raised" can help tell that story.

Yet many of these labels also frustrate her. There's often a gap between what they seem to promise and what they actually deliver. Marketing fills that gap.

(For a list of some labels and what they really mean, you can jump to the bottom of this story.)

For instance, "free-range" eggs probably came from hens that spent most or all of their lives indoors. And then there's "non-GMO."

When I mention this label, Thistlethwaite lets out a sigh. "I'm going to say, offhand, that is probably my least favorite label," she says.

Non-GMO means, of course, that this food wasn't made from genetically modified crops. There are GMO versions of corn, soybeans, canola and sugar beets, along with a few other crops.

But companies now are printing that non-GMO label on things like strawberries or mangoes, which are never genetically modified. "They're doing it to differentiate themselves, even though their product is exactly the same as everything else on the shelf," Thistlethwaite says. "It's primarily a market-driven label that big industry really loves."

Food companies love it, apparently, because people think that non-GMO is somehow good for the environment; maybe it means less pesticide spraying.
But that's not what it means.

"Organic," on the other hand, really does mean that the food was grown without synthetic pesticides and fertilizer. Matthew Dillon, director of agriculture policy and programs for the company Clif Bar, thinks it's the most trustworthy eco-label. "It's fully transparent. It's enforced by law. It's got teeth to it," he says.

But the organic industry also sometimes overpromises, he says. It markets organic produce as healthier for you, the consumer. The evidence for that, though, is weak. There's much stronger evidence that it's better for the environment. "It makes a difference primarily to farmers, to rural communities, to soil health, to animal welfare," Dillon says.

The Truth About Carbs And Calories

The Truth About Carbs And Calories

An even deeper problem with labels came up as I was talking with Kim Elena Ionescu, chief sustainability officer for the Specialty Coffee Association.

We were talking about the benefits of fair trade coffee. Ionescu explained that most fair trade products come from small farmers who are organized into cooperatives and that the certification guarantees a minimum price for their products.

"And chances are you're making somebody's life better?" I ask.

Ionescu pauses for a few seconds. "I hope so," she says.

"You don't sound super-convinced," I say.

"Well that's where I feel like the marketing piece gets tricky," Ionescu says, and explains that a minimum price, even when it's 30 percent above the market price, as it is today, may not be enough to lift a small coffee producer out of poverty.

"I mean, it's possible that that producer has a very small amount of land, and there is no price high enough to make that tiny plot of land a viable economic support system for that family," she says.

Or, as Thistlethwaite put it, "Labels are like Band-Aids. They're superficial, kind of feel-good solutions to systemic problems."

Buying food with labels like organic, or "grass-fed," may not do much to preserve wildlife habitat or slow down global warming.

This may seems depressing. But Matthew Dillon, at Clif Bar, says it shouldn't be. Consumers actually should feel relieved, he says. "They should, first of all, understand that improving the food system is not all on them. That they shouldn't feel guilt and shame about the purchases they make."

Our individual shopping decisions are not going to solve these big problems, he says. But political decisions, like better environmental regulations, really could. That's what people really ought to focus on, he says.

Some ethical labels and what they mean

It's the biggest and best-known eco-label. Organic farmers follow rules that ban synthetic pesticides and fertilizer. The use of genetically engineered ingredients is prohibited, and there are minimum standards for humane treatment of animals. Organically raised cattle or chickens consume only organic feed, which is the main reason organic eggs are more expensive. Organic farmers may use composted animal manure as fertilizer and control pests with natural predators or by rotating their crops.

These foods are largely free of ingredients from genetically modified crops — which at this point are mainly corn, soybeans, sugar beets and canola. The most popular non-GMO label, displaying a butterfly logo, is managed by the nonprofit Non-GMO Project. There is nothing in this standard that requires any particular farming practices, though. Unless they also are certified organic, non-GMO crops typically are grown with conventional pesticides.

These eggs came from chickens that are not housed in wire cages. They're still indoors, though. "They're living on the floor of a barn," Rebecca Thistlethwaite says. "There may be some perches in there, but they're packed in pretty tightly." Many of these cage-free chicken houses are very large, containing tens of thousands of birds. This label only applies to eggs because chickens grown for their meat aren't ever kept in cages.

Under the USDA's definition, "free-range" eggs must come from hens that have some access to the outdoors. Thistlethwaite, though, considers this label misleading. "You could have a large barn with 100,000 hens in it, and just a couple little doors," she says. "You go visit that kind of farm, and there might be 30 hens outside that figured out how to climb out those doors."

This label, if it's backed by a credible certifying organization, actually means a great deal. Pasture-raised chickens actually spend much of their time foraging on pasture. This usually means that they are moved to different pastures on a regular basis. Thistlethwaite says consumers should beware of egg producers who are trying to put that label on their products without actually doing the work. Look for certifications that are enforced. The one that Thistlethwaite prefers is "Animal Welfare Approved." Consumer Reports also has put together a guide.

This label is mainly found on beef. It means that the cattle never were confined in a conventional feedlot and fed a grain-heavy diet. Much of the grass-fed beef that you'll see in American grocery stores is ground beef, often from Australia. If you search for it, though, you can also find grass-fed steaks and other cuts of beef from cattle raised in the United States. Once again, Thistlethwaite suggests that consumers look for third-party certification, for instance, from the American Grassfed Association.

This label appears most often on coffee or chocolate, but sometimes on bananas. It is managed and verified by a couple of different fair trade certifying organizations. Fair trade coffee producers are guaranteed a minimum price for their product. Historically, that minimum price is higher than the standard market price. Right now, it's 30% more. For the most part, fair trade products also were grown by small farmers who are organized into cooperatives.

This story was adapted from an episode of Life Kit, NPR's family of podcasts to help you navigate life. Subscribe on Apple Podcasts. Follow @NPRLifeKit on Twitter. Subscribe to the Life Kit newsletter for news and updates.