Accessibility links
Naples Rolls Out A Fine-Tuned Dough, And The New 'Cloud Pizza' Is Born : The Salt Bucking generations of tradition, some Neapolitan pizzaiolis are experimenting with new ideas, bolstered by a new flour that creates a charred, puffier and lighter crust. And the trend is catching on. 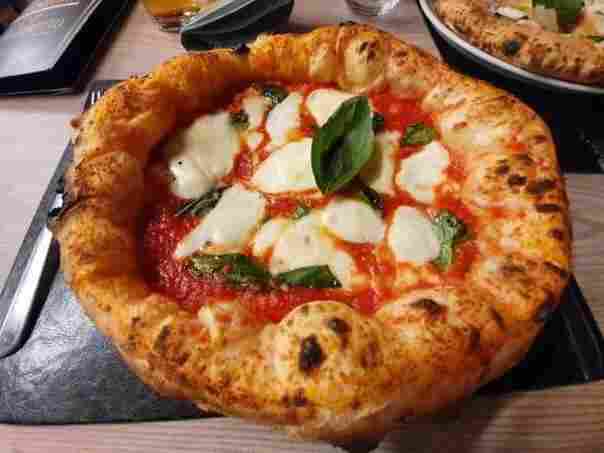 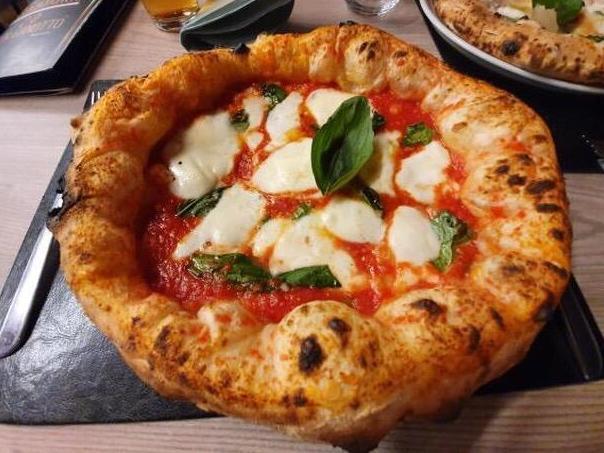 Ever since the quasimythic birth of margherita pizza in Naples in 1889, Neapolitan pizzaioli have regarded their variety as the only true pizza, looking down upon differing styles in Brooklyn, Chatham, Chicago, Detroit, Kansas City, Melbourne, New Haven, Stockholm and Tokyo. For more than a century, they have seen anything beyond their Neapolitan borders as little more than nuanced blasphemy, the squabbling dialects of errant heretics. To them, non-Naples pies have counted as pizza about as much as Rob counts as a Kardashian.

But as Naples doubled down on tradition decade after decade, its prestige pies took on a dusty flavor amid a global renaissance. "My father and grandfather never strayed," 29-year-old Vincenzo Capuano, a fourth-generation Neapolitan pizzaiolo, said in Italian by way of a translator. "Tradition strengthened us but it also held us back." So Capuano did something his ancestors never did: He listened to the heretics, despite not becoming a convert. "I can learn from any pizza — even Chicago deep dish," he said. "My family and my Naples never thought that before."

This year, a handful of young upstarts — including Capuano — are changing Naples' habits, bolstered by a new flour developed by Italian miller Caputo, a gold standard in pizza flour backed by Vera Pizza Napoletana, Naples' governing authority on pizza authenticity ("Naples is married to Caputo," said Capuano.) Caputo regularly makes new flours — Americana, for U.S.-style dough, debuted in 2016 — but the Neapolitan version hasn't changed much since 1889. Until now.

"I feel like a rebel now, a radical," said Capuano. "People in Naples told me my pizzeria would be closed in two months. Now I'm opening my third."

The new flour is called Nuvola (Italian for "cloud"). To harvest it, the combines aren't sent into fields until rainy season, late in the game, so the grains are very mature and rustic, almost aged. Antimo Caputo, the third-generation CEO of the flour producer, likens it to passito, a raisin wine. The chemical effect, he said, is that the grain is higher in fiber, with more bran, minerals, germ, protein and amylase, a sugar enzyme that allows a crème brûlée sense of character, deeply charred but not bitter.

Broadly, the maturation enables faster natural fermentation, although the dough needs roughly 24 hours of proofing (mass-market pizza companies, like Domino's, turbo-boost their fermentation for same-day results with added sugar, an accelerant for yeast.) A lactic acid buildup in Nuvola's natural fermentation process gives the end product some creaminess. It notably has no need for potassium bromate, a carcinogen that is used in the U.S. but is banned in Canada, China, the European Union and many other nations (it is regulated in California).

And, whereas most pizza doughs have a hydration point of 62, Nuvola's higher concentration of soluble starch allows for a wider hydration range, as high as 100, creating a charred, crispier, puffier, lighter crust that is melty, more digestible and yields a more bouncy, chewy cornicione (pizza-speak for the pie's raised rim). 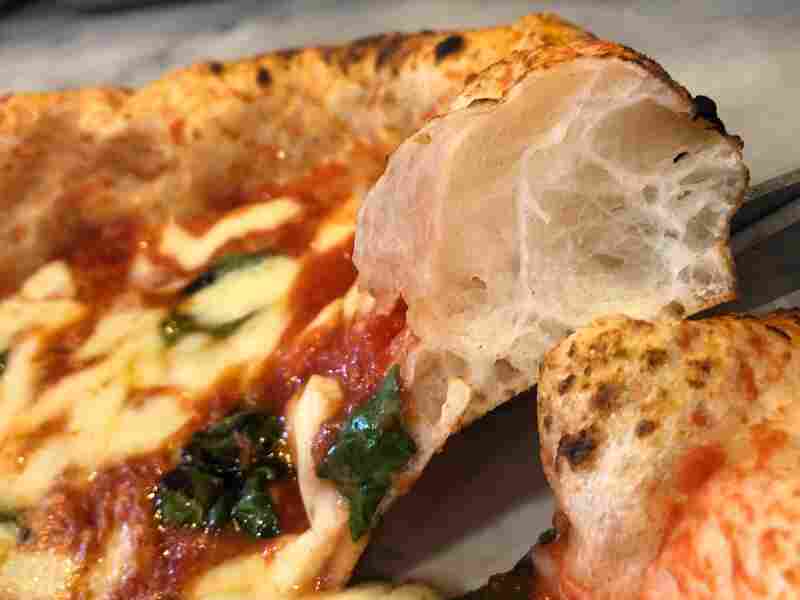 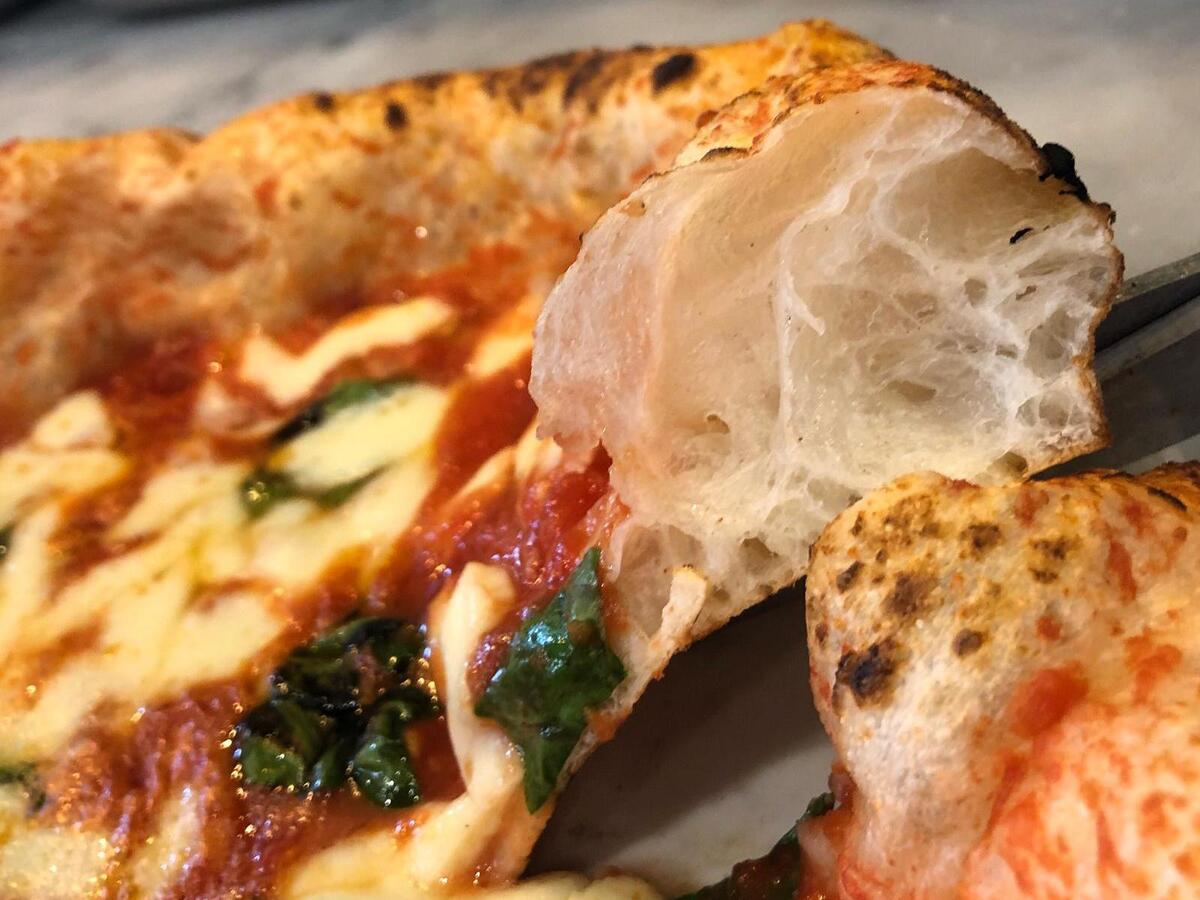 "The starting point is a new generation of pizza-makers. More exact. More specific. This is a tough grain that was previously used for breads, not pizza. It was not in the older generations' mind to approach the dough on this exact level. Nuvola is only possible because of this increase in skill and specifics," said Caputo, who added that it took almost a year to create a pizza-ready adaptation of the grain. "The traditional approach was a Mercedes with automatic shifting. Nuvola is a Ferrari with manual shift. It's the Ferrari of flours: hard to drive but a beautiful experience if you know what you're doing."

"I've experimented with basically everything and it's just the most versatile, high-performance flour I've ever seen: rum cakes, fried doughnuts, 500 degrees, 900 degrees, anything," said Nicole Russell, the YouTube-trained pizzaiola behind a rarefied pizza spot in New York City that uses 100% Nuvola: her word-of-mouth, pickup-only Last Dragon Pizza, which she runs out of her home. "It's a 45-minute drive for me to the Jericho Turnpike off Cross Island and it's double the cost, but I kept my pizza prices the same. That's how much I want it. That's how much of a difference it delivers."

Nino Coniglio's The Woodstock, a pizzeria in Manhattan's trendy Meatpacking District, sells a modified 90% Nuvola slice. "We lost something in Italy and America that we're able to rediscover," said Coniglio, who field-tested Nuvola with bagels and focaccia.

And Roberto Caporuscio, who runs Kesté in Greenwich Village's who's-who hood of pizza royalty, gave his dough a cloudy kick by mixing in 25% Nuvola.

"I was not sure about Nuvola, of course, but then I tasted it. There are two people: unsure people and people who have tasted it," said Caporuscio. "You can do Neapolitan pizza with it, of course, but also New York or Roman. It's very versatile, which is important to me because we teach pizza-making classes."

Caporuscio raises an interesting point: What do people without a dog in the fight think?

"It doesn't taste at all like a Neapolitan pizza," says pizza blogger Miriam Weiskind, after taking her first bite of Coniglio's Woodstock margherita. "It has cloudiness," she said, sticking most of her index finger into a large, charred crust bubble, "but with a New York chew, a dense taste. It's gummy. It's a lot of mixed messages." She inspected it with her phone's flashlight and took a few photos.

Because Nuvola involves food in 2019, it also involves Instagram. As much as it's about taste and chemistry, it's also about visuals and novelty. For all its supporters, it is lifted highest by the power of now and the accompanying wow factor. It seems tailored for likes, if not love.

"I took the unloved crust and it made it my trademark," said Carlo Sammarco, in Italian through a translator. He is the 28-year-old pizza rookie who was the first to use Nuvola in the Neapolitan outskirts of Frattamaggiore. He dubbed the resulting pie pizza canotto (dinghy pizza, for its resemblance to a toroidal life raft.) "It takes a new person to do that. And a new flour. Nuvola made both of us lovable."

A common refrain among the Neapolitan pizza powers that be is that Nuvola is less of a rebellion or revolution than it is an evolution. In that sense, traditional Neapolitan pizza had become a flightless bird, as wondrous as an ostrich or penguin but incapable of much migration. With cloud pizza, Naples' pizza scene finally is taking flight again.