Accessibility links
Last Winter's Bee Colony Death Rate Is Highest Reported Yet : The Salt An annual survey of beekeepers shows the rate of colony death last winter was the highest reported since the survey began 13 years ago. 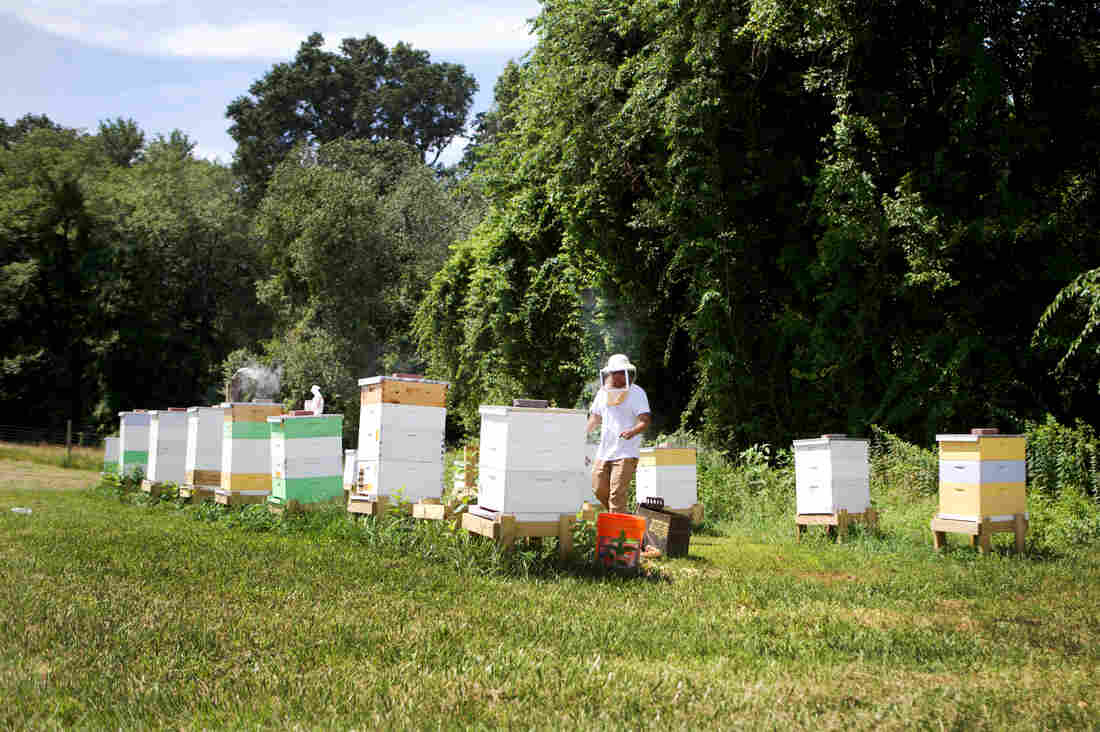 Honeybee hives stand on a field at the Central Maryland Research and Education Center in Beltsville, Maryland. An annual survey of U.S. beekeepers shows the rate of colony death last winter — nearly 40% — was the highest reported since the survey began 13 years ago. Olivia Falcigno/NPR hide caption

It's a sweltering morning in Beltsville, Md., and I'm face-to-face with bee doom. Mark Dykes, a "Bee Squad coordinator" at the University of Maryland, shakes a Mason jar filled with buzzing honeybees that are coated with powdered sugar. The sugar loosens the grip of tiny Varroa mites, a parasite that plagues bees; as he sifts the powder into a bowl, they poke out like hairy pebbles in snow.

"Right now there [are] three mites per hundred [bees]," says Dennis vanEngelsdorp, associate professor of entomology at the University of Maryland and president of the Bee Informed Partnership, which studies bee survival rates. That's a high rate of mites, vanEngelsdorp says: "If this were September and you were seeing that number, you'd expect the hive to die" during the lean months of winter. 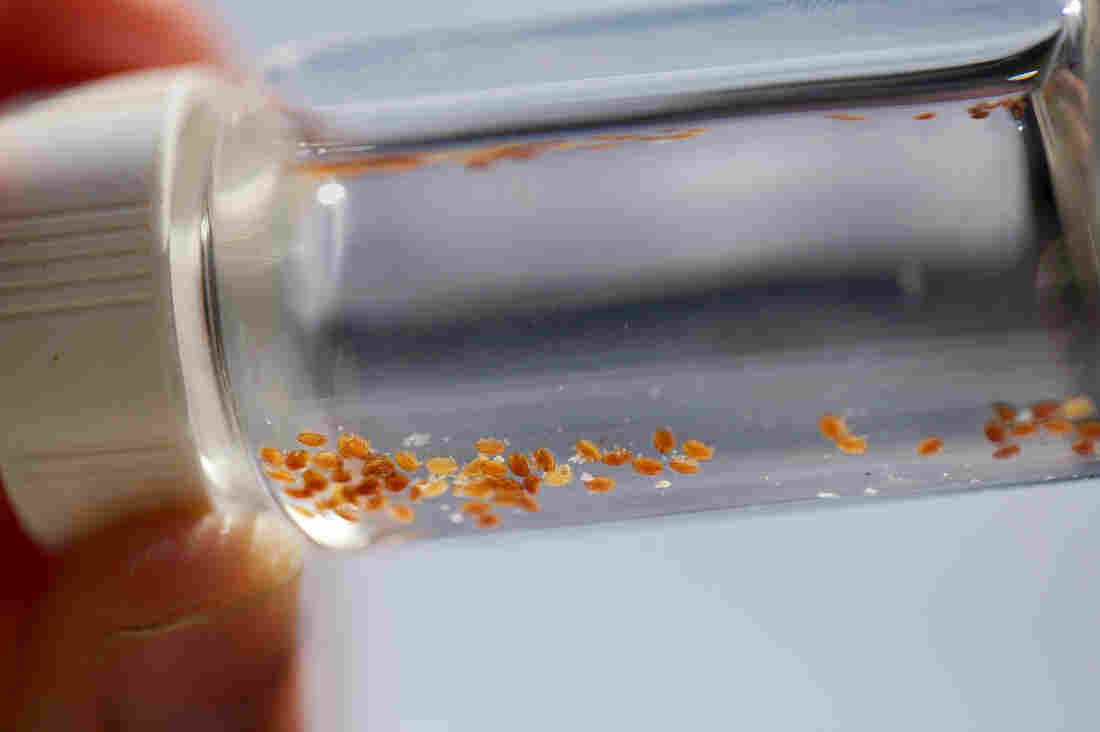 Varroa mites, tiny pests that can weaken and destroy honeybee colonies, are on display in a small jar. Olivia Falcigno/NPR hide caption

Bee colony death continues to rise. According to the Bee Informed Partnership's latest survey, released this week, U.S. beekeepers lost nearly 40% of their honeybee colonies last winter — the greatest reported winter hive loss since the partnership started its surveys 13 years ago. The total annual loss was slightly above average.

The survey included responses from nearly 4,700 beekeepers managing almost 320,000 hives, making up about 12% of total managed honey-producing colonies in the United States. 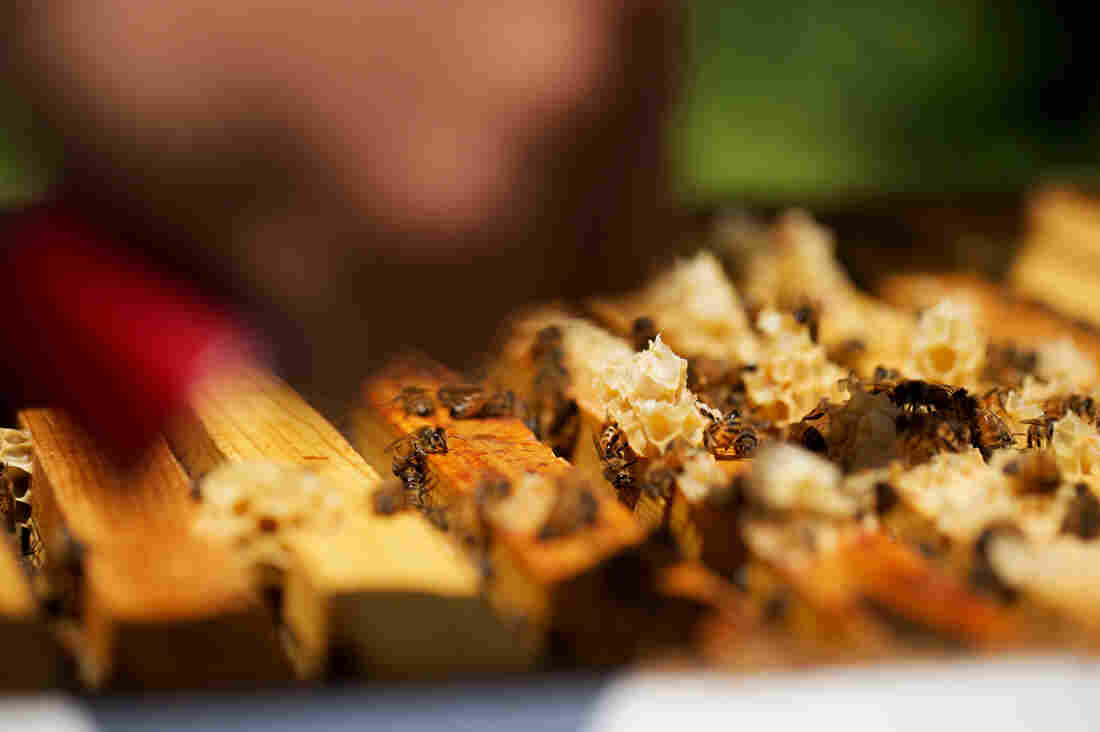 Honeybees crawl through a modern-day hive. This past winter saw the most dramatic losses of managed honeybee colonies in 13 years, according to researchers. Olivia Falcigno/NPR hide caption

"Beekeepers are trying their best to keep [mites] in check, but it's really an arms race," says Nathalie Steinhauer, science coordinator for the Bee Informed Partnership and co-author of the report (vanEngelsdorp is also an author). "That's concerning, because we know arms races don't usually end well."

Steinhauer says Varroa mites are the "number one concern" around wintertime. They've become harder to control, she says, because some of the tools that beekeepers have been using — chemical strips that attract and kill mites, essential oils and organic acids — are losing their efficacy.

Pollinators are responsible for one of every three bites of food we take, according to the U.S. Agriculture Department. Most of these pollinators are domesticated honeybees. They have become essential for many flowering crops, including blueberries, almonds and cherries. Wild insects can't be relied on to pollinate hundreds of acres of these crops, so fruit and nut producers call in commercial honeybee colonies instead. 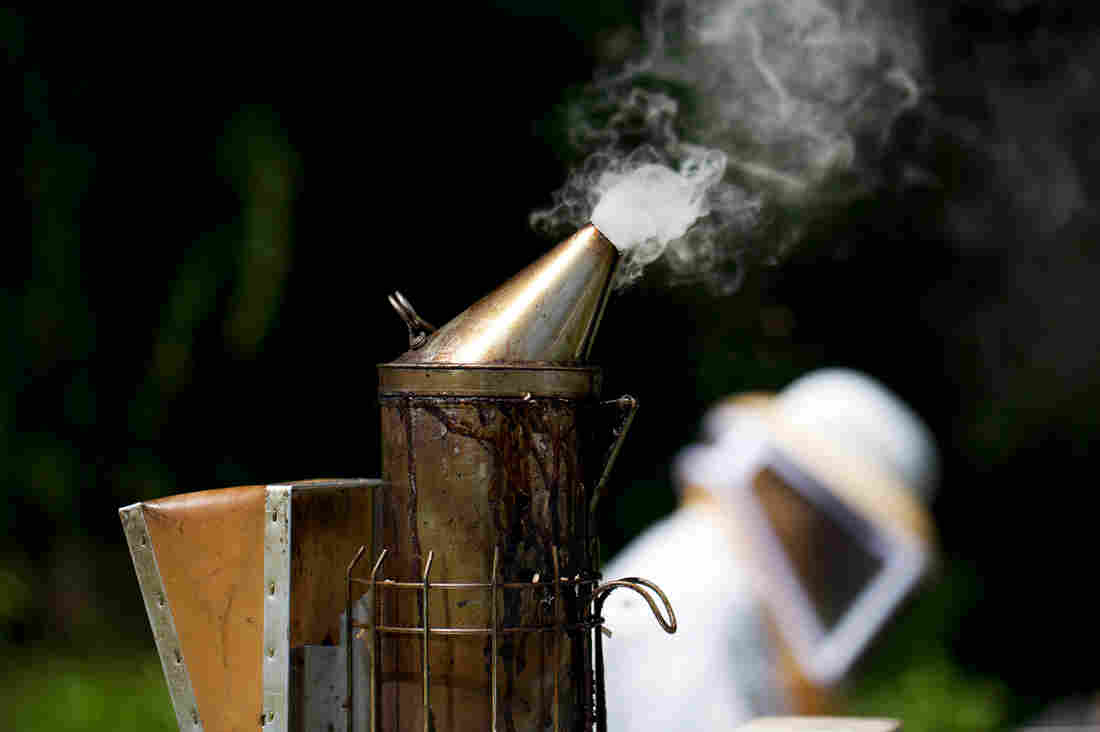 Beekeeping has thus become an essential cog in the machine of American industrial farming. But it's a tough industry. Commercial beekeepers are so migratory that it's difficult to track how many live in each state, and all that moving around is expensive and stressful. Beekeepers have to monitor thousands of hives for sickness and pests.

These winter losses have made business even tougher, says vanEngelsdorp.

If the beekeeping industry shrinks, he says, crop production will suffer. "If we want to continue to have a food supply that has the variety that we want, we need a movable pollination supply, and those are honeybees," he says. "If we don't have commercial beekeepers managing those, then we won't be able to meet that demand."

Dennis vanEngelsdorp pulls out a frame from a hive. Managed honeybee hives are usually made of stackable, separable components so that beekeepers can closely monitor the colony's health. Olivia Falcigno/NPR hide caption

Maryann Frazier, a retired senior extension associate for the College of Agricultural Sciences at Pennsylvania State University, who was not involved with the survey, says its results are limited by the fact that they rely on self-reported data from beekeepers. Beekeepers who've lost a lot of bees may be more likely to contribute to the survey, she says.

Still, she says the results are troubling, if unsurprising. Stressed, sick bees in close proximity are likely to die during the winter months. And bees face increasing levels of stress. Until all parties work together to address the sources of that stress, she says, steep winter die-offs will continue.

"I don't expect to see a change in losses over time for this reason. There's been no significant effort to correct what's causing the decline," she says.

Take pesticides, she says. "There's a huge amount of data [and] research showing pesticides are a significant player in the decline of honeybees and other insect species. And yet there's been so little done to make a change on that front," she says. "The EPA has been incredibly ineffective."

She says that pesticide industry leaders often try to shift blame for bee declines solely onto Varroa mites and viruses when in fact, she says, "there is so much evidence that pesticides are a major player in the decline of honeybees."

"And these things are synergistic," she adds. Pesticides can compromise immune systems, so when a mite or other pest hits "a bee compromised by pesticides, it's a downward spiral." Other sources of stress, like changing landscapes, have not been corrected. 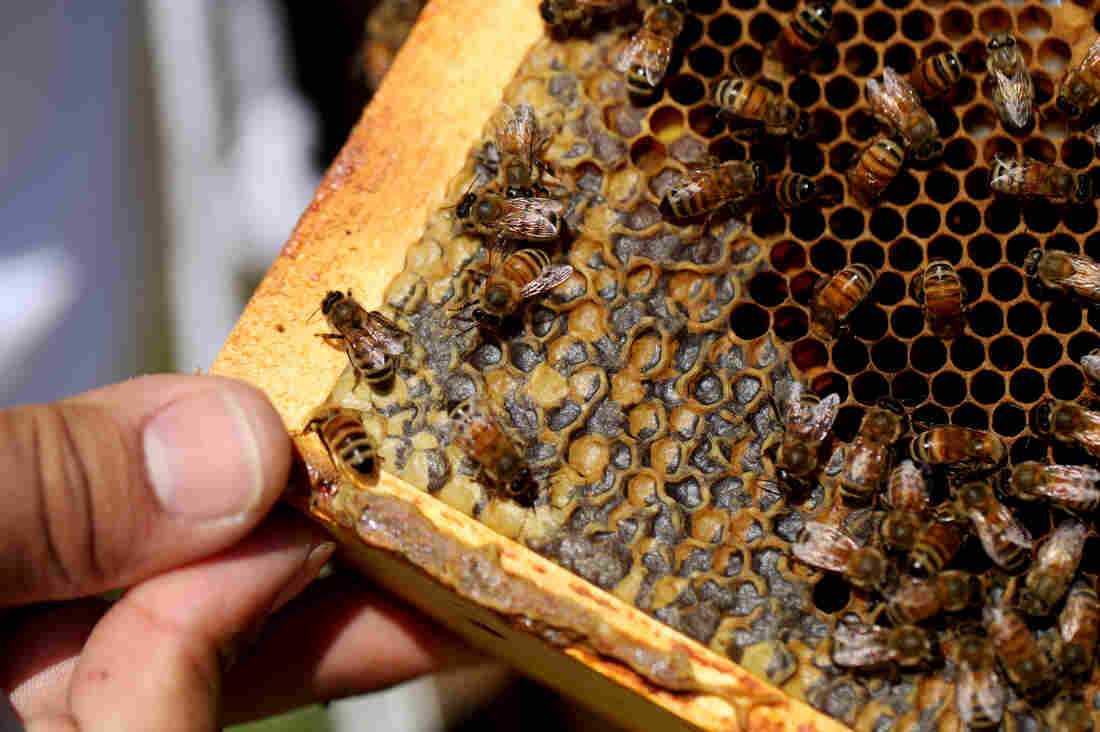 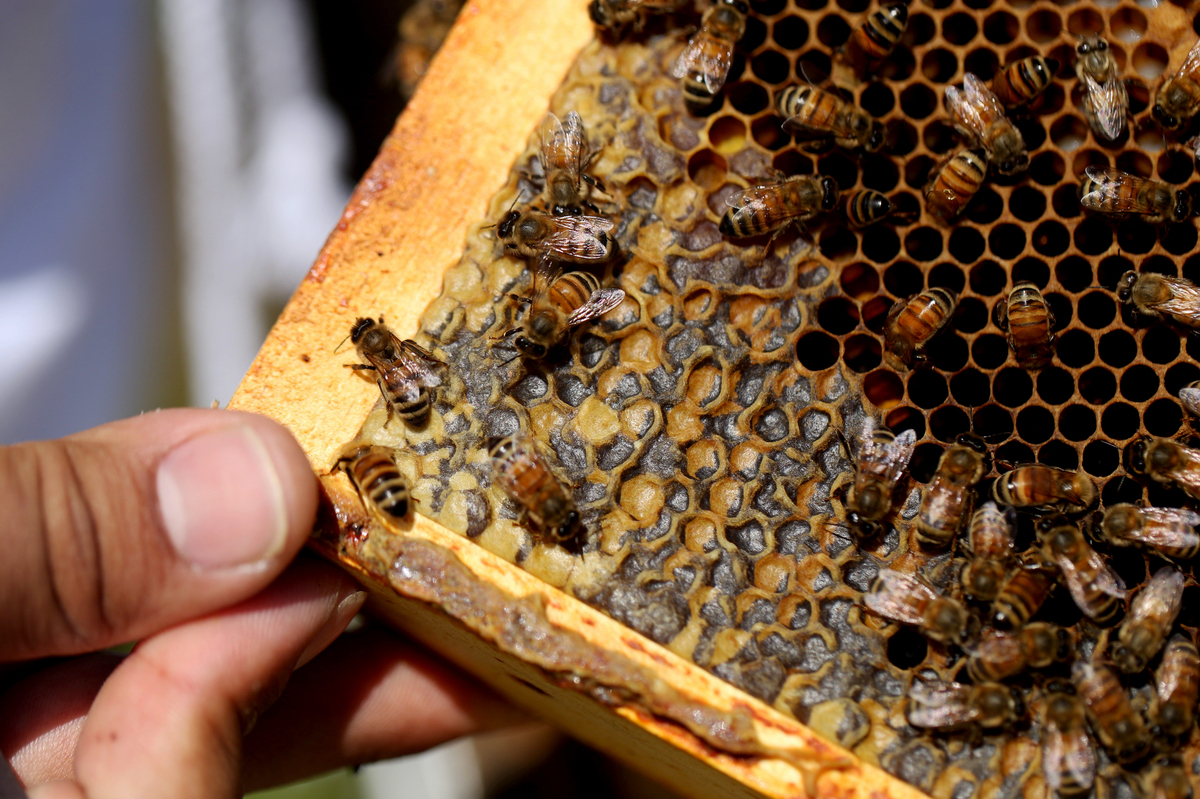 Bees crawl over larvae and capped honey cells on a hive frame. Larvae are especially vulnerable to pests like Varroa mites.

Honeybees are a "sentinel species," Frazier says, meaning that their losses may warn humans of the larger trend of insect decline worldwide, including the decline of other pollinators like beetles and wild bees. "The picture is well beyond honeybees," she says. "The whole system is crashing."