Accessibility links
When Natural Disasters Strike, Operation BBQ Swoops In With Relief — And Ribs : The Salt For eight years, a roving band of competitive barbecuers has traveled to emergency zones across the U.S., serving thousands of hot and tangy meals to people in need. Now they've got a cookbook.

When Natural Disasters Strike, Operation BBQ Swoops In With Relief — And Ribs

When Natural Disasters Strike, Operation BBQ Swoops In With Relief — And Ribs 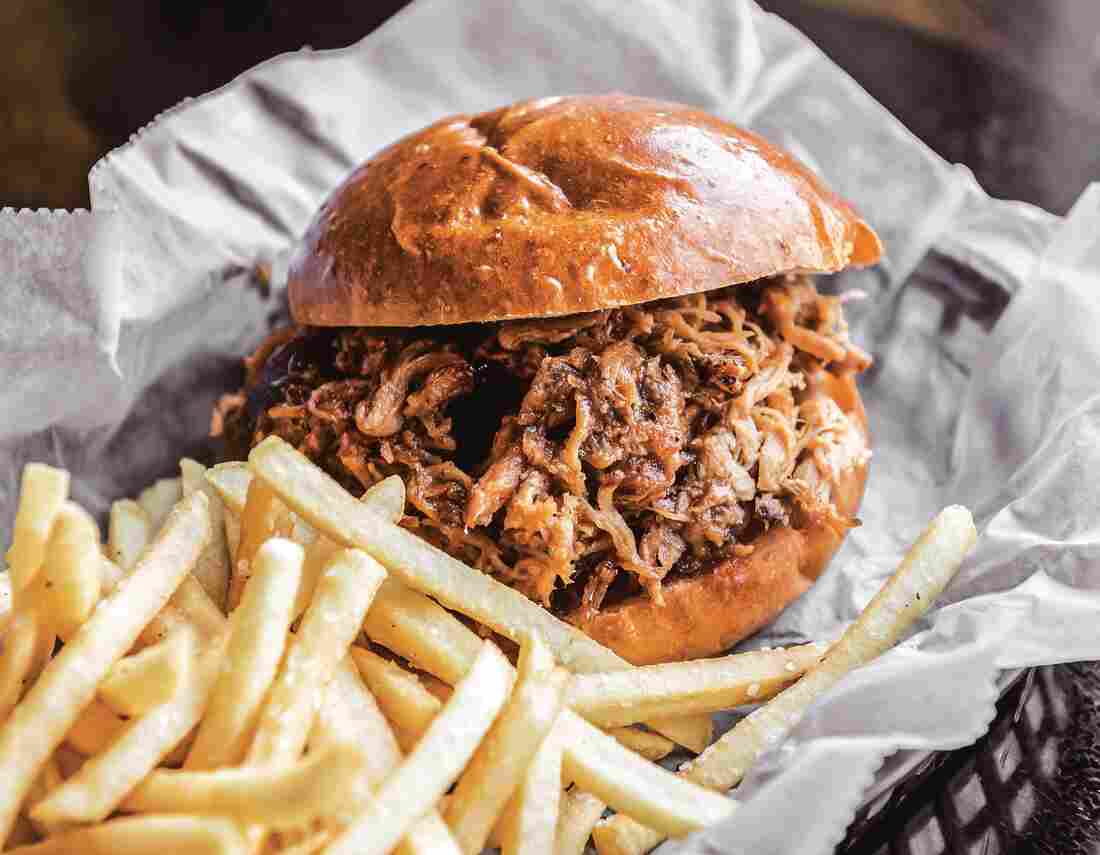 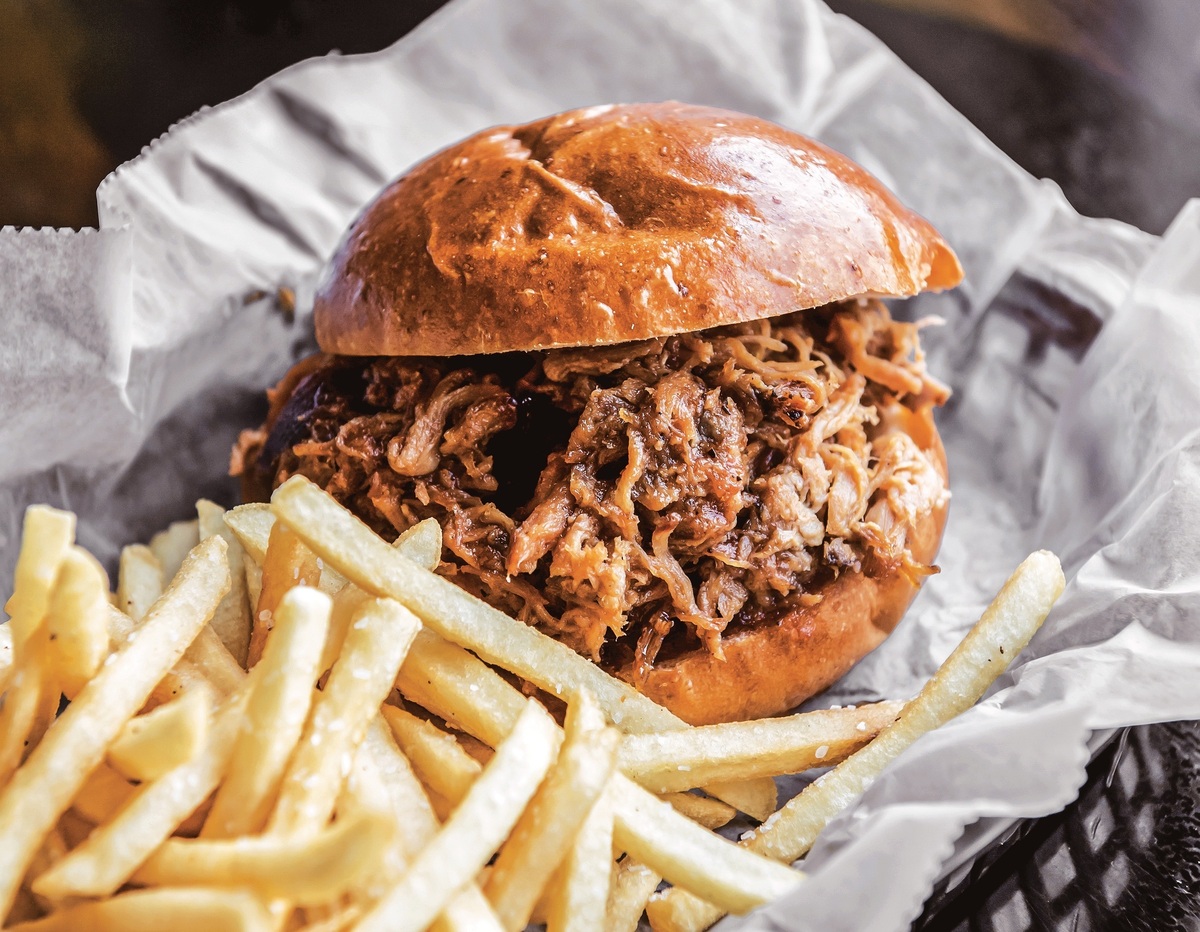 Stan Hays was working in insurance in Missouri when the idea first came to him. It was May 2011, and a tornado had just battered the town of Joplin. He felt the urge to help. So he called up a friend, Jeff Stith. Both men shared a common skill: They were pitmasters on competitive barbecue teams.

"I thought, who better than some guys who set up in parking lots every weekend to bring a comfort meal?" Hays says.

They put out a call on social media, and by noon the following day, a dozen of his buddies had answered. The team drove to the town, setting up their smokers amid extensive damage — roofs torn off houses, and entire neighborhoods reduced to rubble. Hays thought they would have a cookout for three or four days before they ran out of supplies. But "whenever we needed something, it seemed to appear," he says. They stayed for 11 days and served 120,000 meals.

With that, Operation BBQ Relief was born: a roving band of competitive barbecue team members, their loved ones and others traveling to disaster zones across the country, ready to whip up thousands and thousands of hot and tangy meals for people in need. Eight years after that first tornado, the operation has served nearly 3 million meals across 26 states and has "deployed" to 60 disasters. 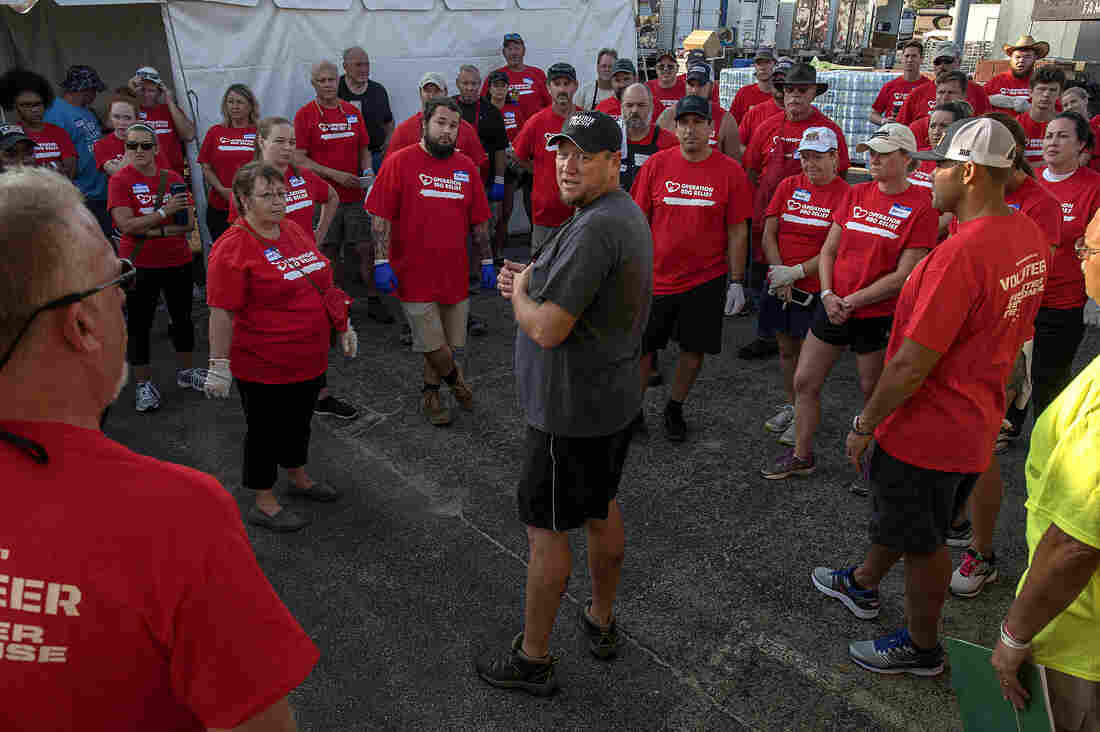 Operation BBQ Relief serves more than ribs and sandwiches, Hays says. "Barbecue is comfort food," he says. "It reminds people of good times with friends and family, and gives them hope for those good times again." Plus, barbecue meals tend to be hearty and high in protein — good for periods of scarcity. Hays says that many of the disaster survivors he serves haven't had a warm meal in days.

Now, Hays has collected recipes from his wide network of competitive barbecuers and Operation BBQ Relief volunteers in a cookbook he co-authored with Tim O'Keefe, a barbecue judge in the Midwest: Operation BBQ: 200 Smokin' Recipes from Competition Grand Champions. The book, which went on sale in April, features recipes from more than 70 teams of championship-winning pitmasters and barbecue cooks, including Hays' 13-year-old daughter, Anna, who started cooking when she was just 6.

Amassing the recipes was challenging, Hays says. "There's two things I always tell people about competition barbecue people," he says. "One, they're very passionate about their cooking. Two, they don't write anything down."

The 200 recipes he managed to get in writing range from fancy competition fare, like smoky tamari-lime tri-tip, to a simple pulled chicken sandwich recipe — reminiscent of the pulled pork version that Operation BBQ Relief volunteers commonly serve at disasters. (Pulled pork sandwiches are affordable, quick to make and easy to eat, Hays says.) The book also includes inspirational stories from volunteer barbecuers about their time helping out. A portion of book proceeds go to Operation BBQ Relief.

Everyone involved with Operation BBQ Relief, volunteers and workers say, has at least one "moment" that keeps them hooked on the work. 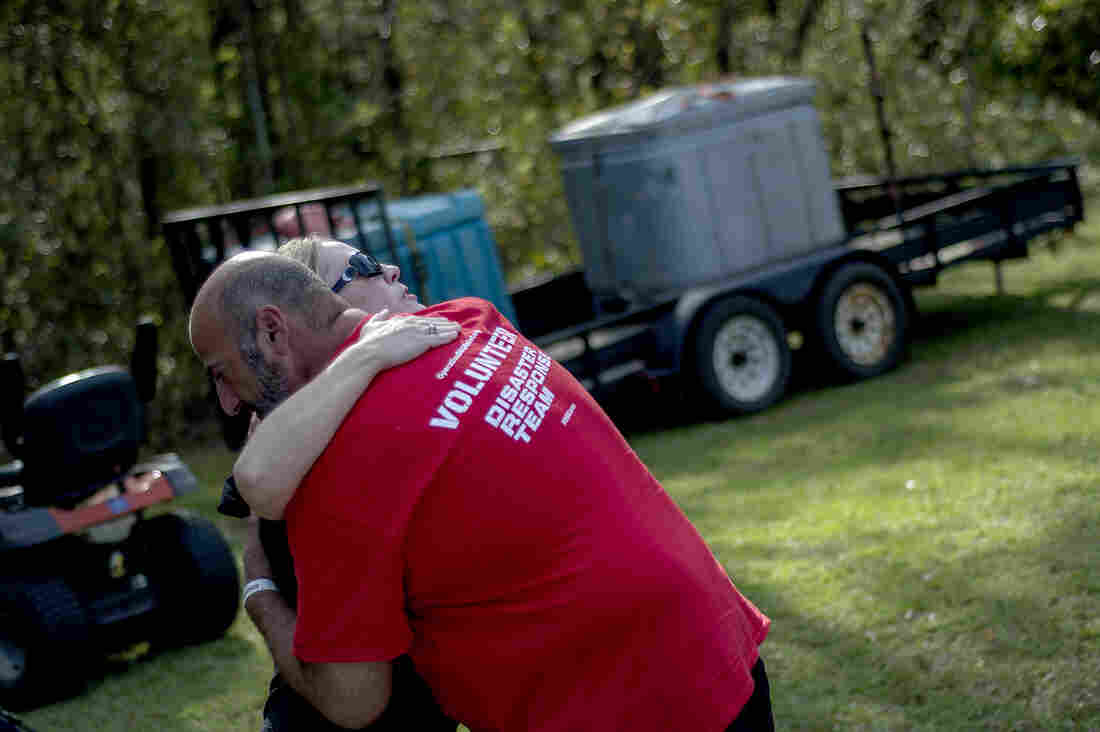 Operation BBQ Relief provides meals to displaced residents and emergency personnel during times of natural and other disasters. Above, David Marks, head of marketing for the group, shares a hug with a woman during relief operations in Wilmington, N.C., last year. Jeremy Lock hide caption

For Leigh Carnell, the first moment was after Hurricane Harvey, which hit southeast Texas in 2017. "It hit home," she says — literally: She lives in Houston. "I spent 10 days total volunteering. You get hooked; you get addicted. You just want to help more." Then, at her next disaster, she met a family who had lost everything. The mother went up to her after the meal, and hugged her, and started crying. "I hope that meal gave her a sense of peace, a sense of hope," Carnell says.

For Joey Rusek, it was just after he had retired from his job as a criminal investigator in Virginia and started his own barbecue business called Backdraft Barbecue. One afternoon, he and his wife saw a truck driving down the highway on its way to the 2016 West Virginia floods. The side of the truck read: OPERATION BBQ RELIEF, TEXT OBR TO 51555. "So that's what we did," he says. Three years later, he is the operations manager for The Always Serving Project, Operation BBQ Relief's emerging nondisaster program, which visits communities where chronic hunger is more common.

As for Hays, his moment came after that first tornado in Joplin. "Mine is the little old lady who had told us about the tornado and riding out the tornado in her bathroom," he says. "Basically, by the time it was over, there was no roof and she could see the sky and her house was gone."

"I just remember her coming up with tears and thanking us for a hot meal," he says. "It was one of the most humbling feelings I've ever had."