Accessibility links
Our Taste For Turtle Soup Nearly Wiped Out Terrapins. Then Prohibition Saved Them : The Salt By the turn of the 20th century, America's love affair with diamondback terrapin soup — a subsistence food turned gourmet fare — had left the turtle's population teetering. Booze ban to the rescue.

Our Taste For Turtle Soup Nearly Wiped Out Terrapins. Then Prohibition Saved Them

Our Taste For Turtle Soup Nearly Wiped Out Terrapins. Then Prohibition Saved Them 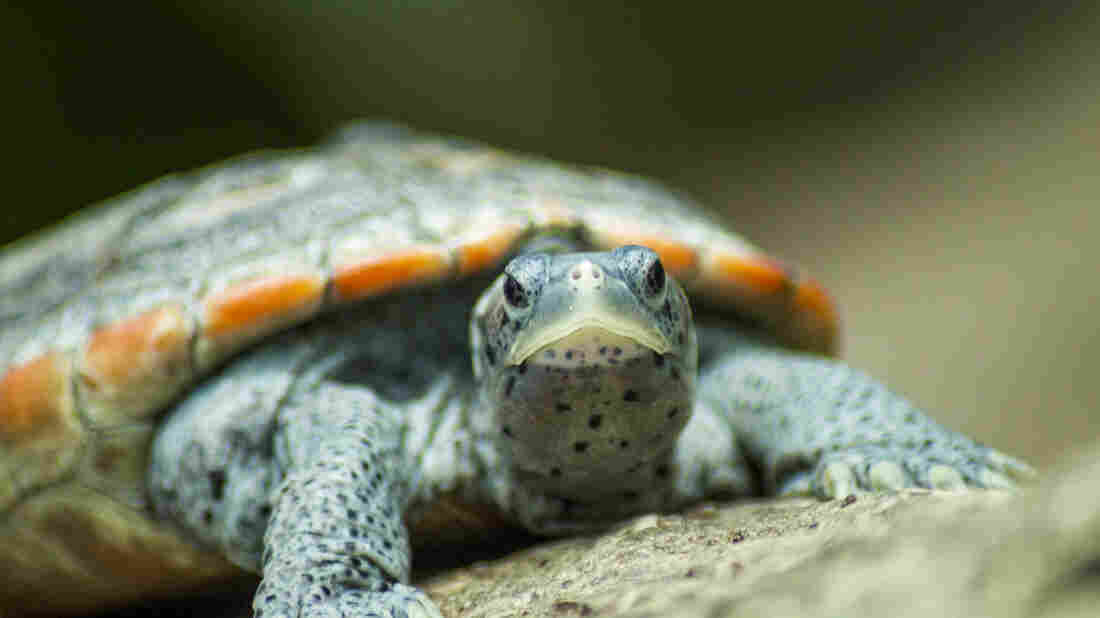 In less than 100 years, thousands upon thousands of diamondback terrapins had succumbed to the American appetite, depleting the species. Jesse D. Eriksen/Getty Images hide caption 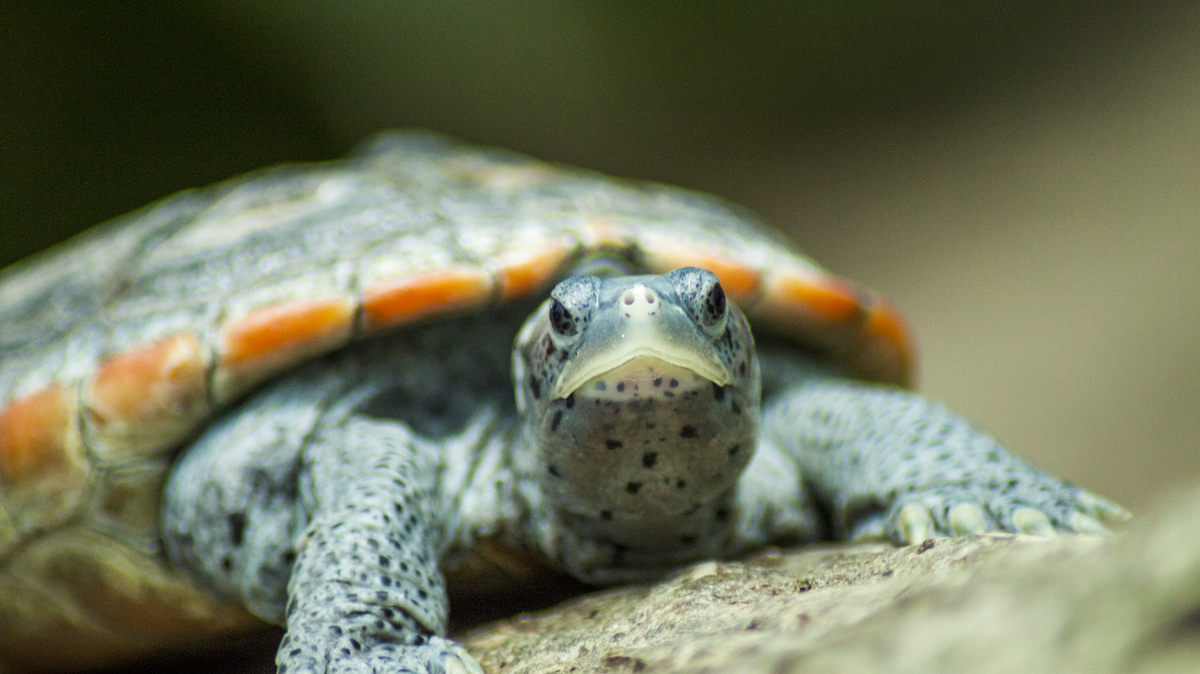 In less than 100 years, thousands upon thousands of diamondback terrapins had succumbed to the American appetite, depleting the species.

In the mid-19th century, Americans developed a frenzied culinary affair with turtle. Almost overnight, the diamondback terrapin — a small coastal turtle found from Cape Cod to the Gulf Coast — went from subsistence food to luxury cuisine, showing up on menus from the White House to Gold Rush-era San Francisco.

The consequences were savage. By the turn of the 20th century, overharvesting had left the terrapin population teetering on the brink. Once available for a few dollars a dozen, the cost of the now hard-to-find terrapin skyrocketed. The future looked bleak for the diamondback terrapin. Then came the unlikeliest of heroes: Prohibition.

"Prohibition impacted the terrapin industry in the entire country in 1919 with the 18th Amendment to the U.S. Constitution," says Maria Cathell, executive director of the Museum of Chincoteague, an island off the Virginia coast with a robust terrapin trade at the turn of the 20th century. "Sherry was a key ingredient in terrapin soup [and] without access to sherry, the popularity of the soup plummeted."

A culinary craze for turtle

Between the mid-1800s and 1920s, the diamondback terrapin was firmly lodged in the hearts and stomachs of the wealthy and powerful at the top of the American food chain. It hadn't always been that way. Terrapin, a name derived from a hodgepodge of the Algonquin, Abenaki and Delaware words for "edible" or "good-tasting turtle," had been part of the Native American diet for centuries. Cheap and plentiful, the Diamondback was also important to the diet of enslaved African Americans forced to live along the southern coast. Even as late as the Civil War, Confederate soldiers were supplementing their meager rations with the abundant terrapin.

By the mid-19th century, though, something had fundamentally changed. Suddenly, the little turtle began to show up on tables at Andrew Jackson's White House and New York's famous Delmonicos, once considered the best restaurant in the country. We don't really know "how and why terrapins became a gourmet item," biologist and diamondback authority Barbara Brennessel told me in an email sent from the marshes of Massachusetts, where she's monitoring the terrapin nesting season. But gourmet they were.

The moneyed set would dine on the dish du jour at popular "turtle frolics," large feasts where crowds slurped massive vats of terrapin soup, and at expensive restaurants and private clubs in New York, Washington, Philadelphia and Baltimore. Meanwhile, middle-class housewives tried their hand at turtle, too. Recipes for terrapin soup appear in cookbooks like the 1902 tome on food and household management, Mrs. Seely's Cookbook. Heinz and Campbell's also jumped on the terrapin train, marketing their canned turtle soups (and "mock" turtle soups made of calf's head) to the hoi polloi, for whom exorbitant prices left actual terrapin soup out of reach.

Though terrapin was occasionally prepared as "steaks," soup made with cream, butter and a healthy dose of sherry or Madeira wine was the gold standard of turtle dishes. It's a recipe that still shows up at a handful of restaurants in the East and South, with one big change: Following decades of unregulated overharvesting, the now protected diamondback terrapin, prized for its sweet, white meat, has been replaced by farm-raised alligator snapping turtles.

"Every menu we've ever seen, [dating] back to the '40s and '50s, has turtle soup on it," says Ti Martin, co-proprietor of Commander's Palace, a historic restaurant in New Orleans' Garden District, where the dish is still on offer.

As children, Martin and her sister and co-proprietor, Lally Brennan, would name and play with the snapping turtles that arrived alive at the restaurant before they were sent to the kitchen. These days, Commander's Palace receives the meat in chunks from a Louisiana farm, then combines it with veal stock, pureed lemon tips and 20 other ingredients to create its bestselling dish. Martin jokes that the restaurant uses so much sherry in the popular soup, it must order more of the liquor than anyone else in the city.

Today, sherry and other fortified wines can be purchased just about anywhere. But for 13 long years, from 1920 to 1933, there was no sherry in America — at least, none that could be acquired legally. During Prohibition, not only did wine and spirits disappear from expensive restaurants, so too did sauces and soups made with liquor, then considered the epitome of gourmet cooking.

"National Prohibition brought catastrophe to most good restaurants, especially the fancy and the expensive ones," writes economist Tyler Cowen in An Economist Gets Lunch: New Rules for Everyday Foodies. One commentator of the era called it a "gastronomic holocaust." Restaurants from New York to Los Angeles shuttered, one after another, taking signature dishes like terrapin soup down with them.

It was a nail in the coffin for terrapin soup, which by the 1910s was increasingly out of reach for all but the rich due to shrinking populations and rising prices. But for the diamondback terrapin itself, Prohibition was the teetotaling dam that stemmed the tide of extinction.

In less than 100 years, thousands upon thousands of diamondback terrapins had succumbed to the American appetite. On remote coastal islands like Chincoteague, just about everyone — including children — had their hand in terrapin harvesting, according to Cathell.

"People caught and sold terrapins when it was convenient for them or [when] they accidentally ended up in their crab traps and fishing nets," Cathell says.

The devastation wrought was substantial, especially in the Chesapeake Bay, where the diamondback was larger and more abundant than elsewhere along the coast, Brennessel says. From tiny Chincoteague Island alone, 3,000 to 4,000 diamondbacks shipped annually to restaurants in the mid-Atlantic and Northeast.

The failure of turtle farms

Domesticating and farming the diamondback terrapin might have helped relieve pressure on the wild species, but early ventures had limited success. The U.S. Bureau of Fisheries, eager to protect the now dwindling species, tried raising terrapins commercially in Beaufort, N.C., beginning in 1902. Other early farms were established in Charleston, S.C., and Crisfield and Lloyds, Md. But Brennessel says, "the slow growth of terrapins, the necessity to keep them protected from predators and poachers, and the need for large pens and suitable growth conditions made terrapin farming a very labor-intensive process." Though popular for awhile, terrapin farming ultimately failed to provide the lifeline needed to reinvigorate the depleted species.

With the arrival of the Great Depression in 1929, even the wealthy had trouble justifying costs of around $100 (in today's dollars) per turtle — even if they had the bootlegged sherry to spare. Unlike the passenger pigeon, which was hunted to extinction in the U.S. during the same period, the diamondback terrapin received a stay of execution.

All states with a native terrapin population now have some protections — including a total ban on harvesting the turtle in Massachusetts and Maryland. And while the terrapin population hasn't exactly rebounded, in part due to the rise of other manmade threats, from climate change and rising sea levels, the one-two punch of Prohibition followed by the Great Depression freed the species from the tyranny of the kitchen.

"Consumption of terrapins may [still] be going on at a very limited level," admits Brennessel, but terrapin soup is off the menu for good.