Accessibility links
Economists Say Trump Administration Is Overpaying Farmers For Trade Losses : The Salt The Trump administration has released details of a $16 billion plan to compensate farmers who've lost money as a result of the trade dispute with China. Some economists say it's too generous. 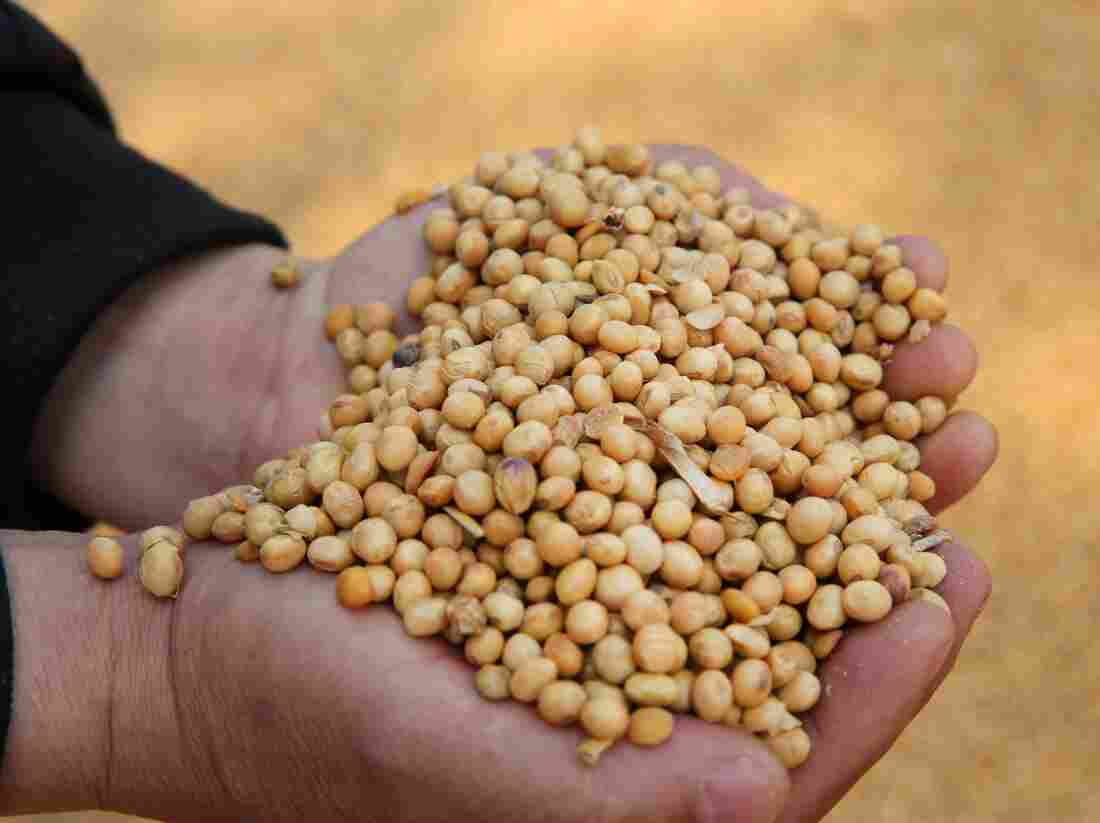 A worker at the port in Nantong, in China's eastern Jiangsu province, displays soybeans imported from Ukraine. Imports of soybeans from the U.S., once China's biggest supplier, have dropped massively since a trade war between the U.S. and China began in 2018. STR/AFP/Getty Images hide caption 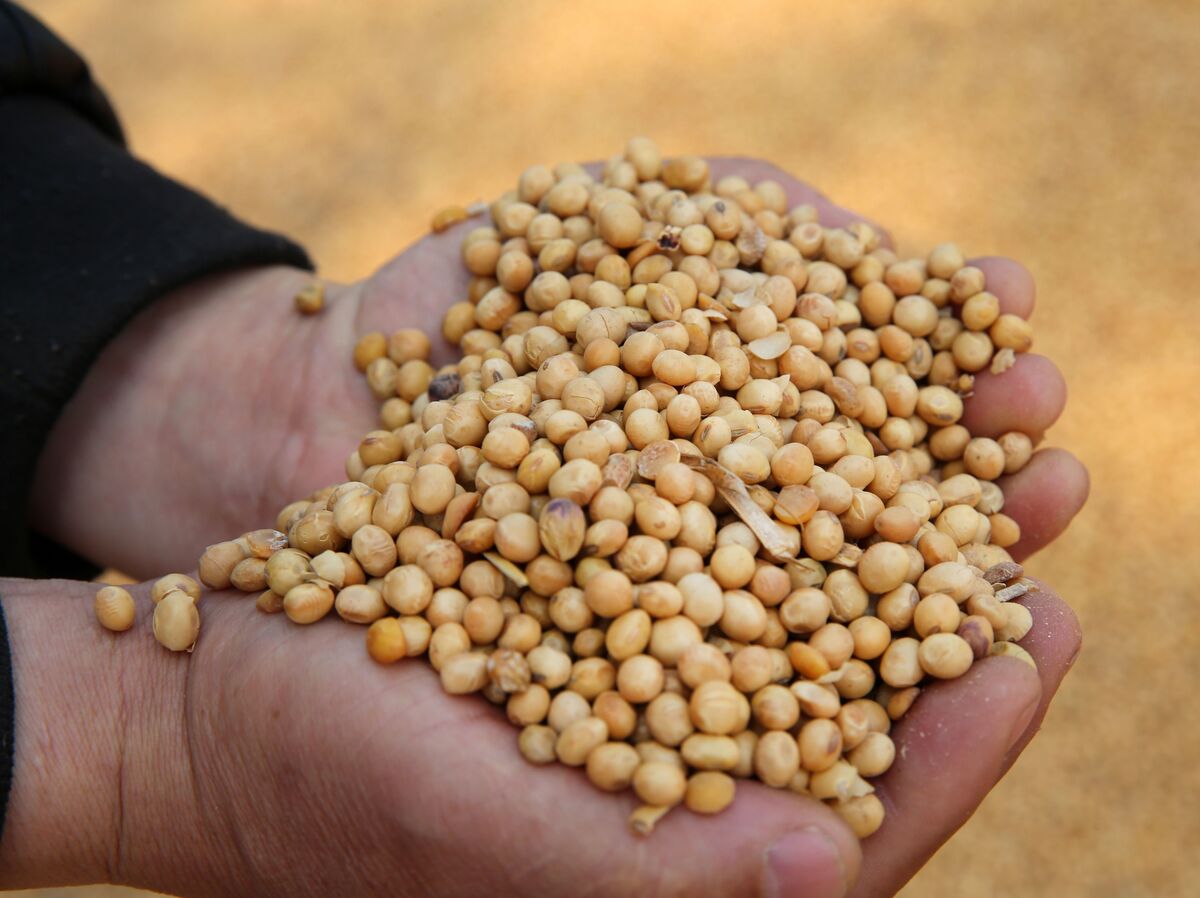 A worker at the port in Nantong, in China's eastern Jiangsu province, displays soybeans imported from Ukraine. Imports of soybeans from the U.S., once China's biggest supplier, have dropped massively since a trade war between the U.S. and China began in 2018.

If you're caught in a trade war, it's good to be a farmer.

Lots of American companies have lost sales since the Trump administration and China embarked on the current cycle of tariff-raising and retaliation. Few, if any, have been compensated as handsomely as farmers.

This week, Secretary of Agriculture Sonny Perdue unveiled details of the latest aid package for farmers who've lost export sales. It includes $14.5 billion in direct payments to farmers, another $1.4 billion in government purchases of agricultural commodities that will be distributed to food banks, and $100 million in loose change to promote exports to new countries. This is on top of $12 billion in aid that the Trump administration distributed last year.

Farmers will receive payments simply based on how much land they've planted with crops that are affected by tariffs, how much milk they produce or how many hogs they own. "We want sign-up to be easy for producers [and] straightforward," said Bill Northey, undersecretary for farm production and conservation, "[so] that we can get these payments to them to address the challenges that they have due to these tariffs."

In his remarks, Perdue portrayed the payments as a modest contribution toward the enormous losses that farmers have endured.

Agricultural economists, however, disagreed. "This is going to be a lot of money pumped into the Corn Belt," said Scott Irwin at the University of Illinois.

Even last year's smaller aid package probably overpaid farmers for their trade-related losses, according to a new analysis from the University of Missouri's Food and Agricultural Policy Research Institute. The study, as first reported by the The Food and Environment Reporting Network's Ag Insider, looked specifically at soybeans, because soybeans were hit hardest by the trade dispute, and most of the aid package went to soybean farmers.

According to the new study, Chinese tariffs caused the price of soybeans grown in the U.S. to drop by $.78 per bushel. Last year's aid package, however, paid farmers more than twice that much — $1.65 per bushel of soybeans that each farmer produced.

Pat Westhoff, the main author of the new study, wrote in an email to NPR that the USDA calculated farmers' losses by estimating their lost sales due to foreign tariffs. The reality, he says, is more complex: As China bought soybeans in Brazil, rather than the United States, other buyers stepped in to purchase more soybeans in the United States, rather than Brazil. After all the reshuffling, American soybean farmers saw a rather modest decline in the prices they received for their soybeans.

Irwin agrees. "Most agricultural economists would probably put the damage at $.80 to $1 per bushel" of soybeans, he says. That's much less than the payment that farmers got from the government.

Secretary Perdue, in rolling out the new aid program, dismissed that analysis. "If you go out and survey farmers, you won't find any that think they are being made whole by this [aid]," he said. "I guess some academicians can do whatever they want to with numbers, but they aren't here on the ground producing and struggling to pay the bills."

This year, the USDA calculated its aid differently in order to keep farmers from simply pursuing more government aid money by planting more soybeans. Instead, farmers will get paid a set amount per acre, as long as they've planted a crop that's eligible for aid. The USDA set different payment rates for each county in the country, apparently based on which crops typically are grown in each area, and whether those crops have been affected by tariffs.

Irwin says that, at first glance, the payouts look "generous." Farmers in many counties in Illinois will be paid more than $80 per acre. "That's a lot of money!" Irwin says.

Two days ago, the USDA was in a distinctly less generous mood when it came to another group of people who get government aid. The agency proposed new rules for the SNAP program — the Supplemental Nutrition Assistance Program, formerly known as food stamps — that could prevent about 3 million people from continuing to receive benefits. That change would reduce spending on SNAP by about $2.5 billion a year.