Accessibility links
The Eating Of The Bulls: From The Spanish Fighting Ring To The Plate : The Salt After matadors kill bulls, restaurants and butcher shops will sell the meat during bullfighting festivals. One Madrid restaurant sells it all year long, despite opposition from animal rights groups.

The Eating Of The Bulls: From The Spanish Fighting Ring To The Plate

The Eating Of The Bulls: From The Spanish Fighting Ring To The Plate 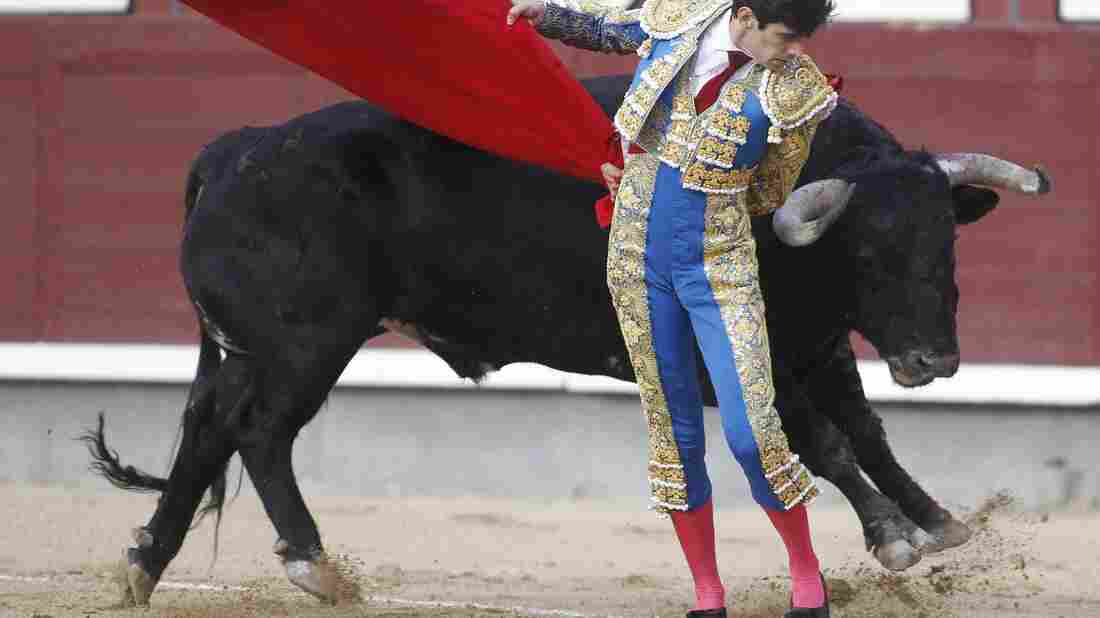 Spanish matador Alberto Lopez Simon makes a pass on a bull at the Plaza de Toros de Las Ventas bullring in Madrid. The restaurant Casa Toribio, located just down the street, keeps the meat from from bulls killed in bullfighting on its menu all year long. Alberto Simon/AFP/Getty Images hide caption 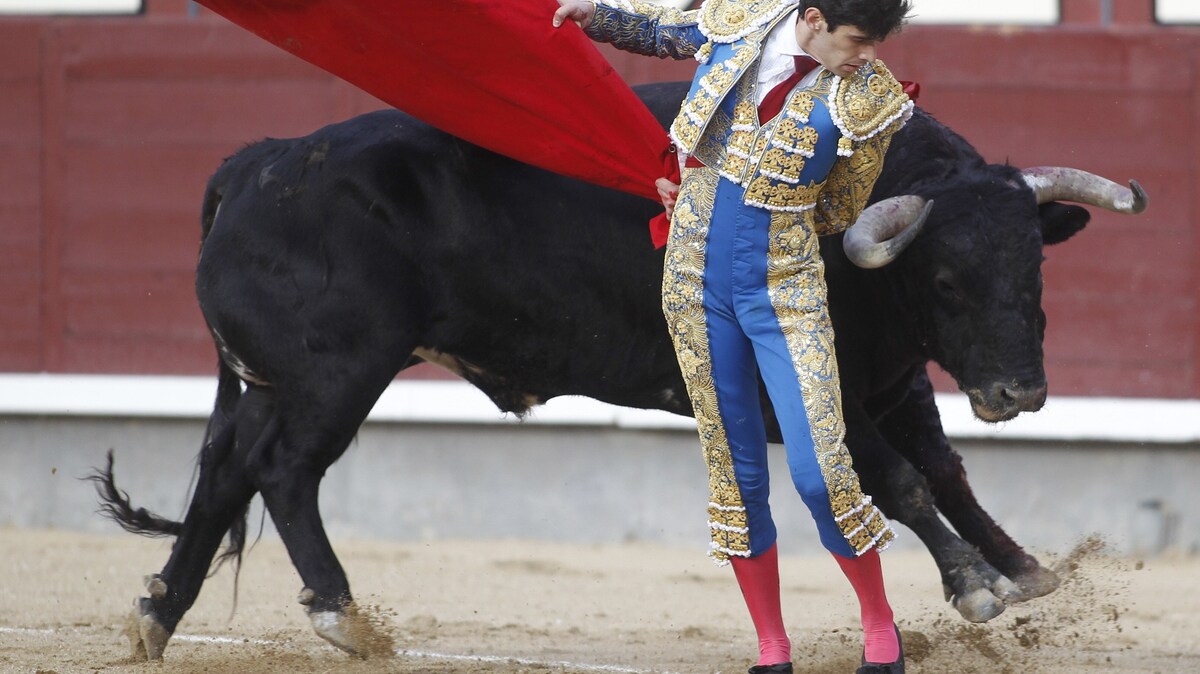 Spanish matador Alberto Lopez Simon makes a pass on a bull at the Plaza de Toros de Las Ventas bullring in Madrid. The restaurant Casa Toribio, located just down the street, keeps the meat from from bulls killed in bullfighting on its menu all year long.

From the moment you step into the restaurant Casa Toribio in Madrid, you will see that it's, well, full of bull. Along with statues dedicated to the animal, several photographs and paintings of matadors — waving red capes in their gallant outfits — adorn the walls, honoring a much-debated bloody Spanish tradition that dates back to A.D. 711 with the coronation of King Alfonso VIII.

But for Casa Toribio, the attention given to bullfighting goes much further than aesthetics. The restaurant prides itself in offering a special dish not found on most menus: carne de toro de lidia, or meat from a bull killed in a bullfight.

"We're the only restaurant in the world that has meat from fighting bulls all year round," says owner Toribio Anta, who opened the restaurant in 1981. There are several photos on the walls of him posing with famous bullfighters. "It started off as a sort of joke, when, 23 years ago, I walked down to the plaza to ask if I could buy some of the bull meat. And it became a huge success."

As an Argentine who grew up in Texas, I've eaten more than my fair share of meat. But I'd never tried bull before — much less a bull that died in battle in front of hundreds of spectators, a breed of bull known as toro de lidia, or fighting bull. But on the morning I visited, Anta said the dish wasn't ready yet — the restaurant is only open for lunch, and the cooks hadn't yet finished prepping.

"It's a tough meat," says Anta. "We cut the meat ourselves, then cook it with red wine overnight, and then it's stewed for four hours before we can serve it."

Eating the bulls' meat after a bullfight is not a new phenomenon. But Anta's restaurant has a sort of monopoly on the industry, and he's quick to boast about it.

"The meat from fighting bulls isn't found anywhere else," he says, adding that most of his clients are tourists from Latin America. "It's not available in other restaurants because I have almost all of it."

A bullfight almost always ends with the matador killing off the bull with his sword; rarely, if the bull has behaved particularly well during the fight, the bull is "pardoned" and his life is spared. After the bull is killed, his body is dragged out of the ring and processed at a slaughterhouse. From there, the meat is distributed to vendors. During the bullfighting fiestas — days-long festivals in various Spanish cities throughout the year (the most famous being Pamplona's running of the bulls) — local restaurants and butcher shops offer bull meat for a limited time; essentially, for as long as the festival takes place. It becomes part of the festivity itself: watching the bullfights, then eating the bulls. (Anta's restaurant, on the other hand, has fighting bull on the menu every day of the year.) 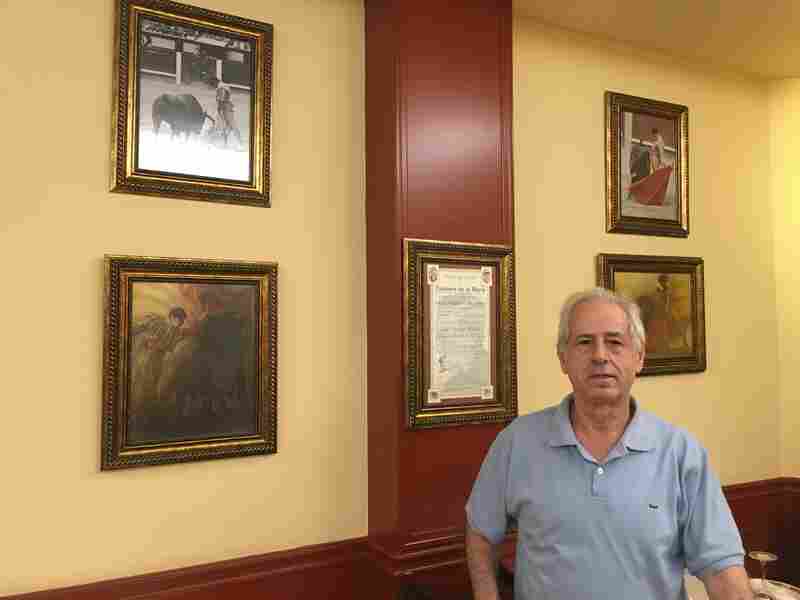 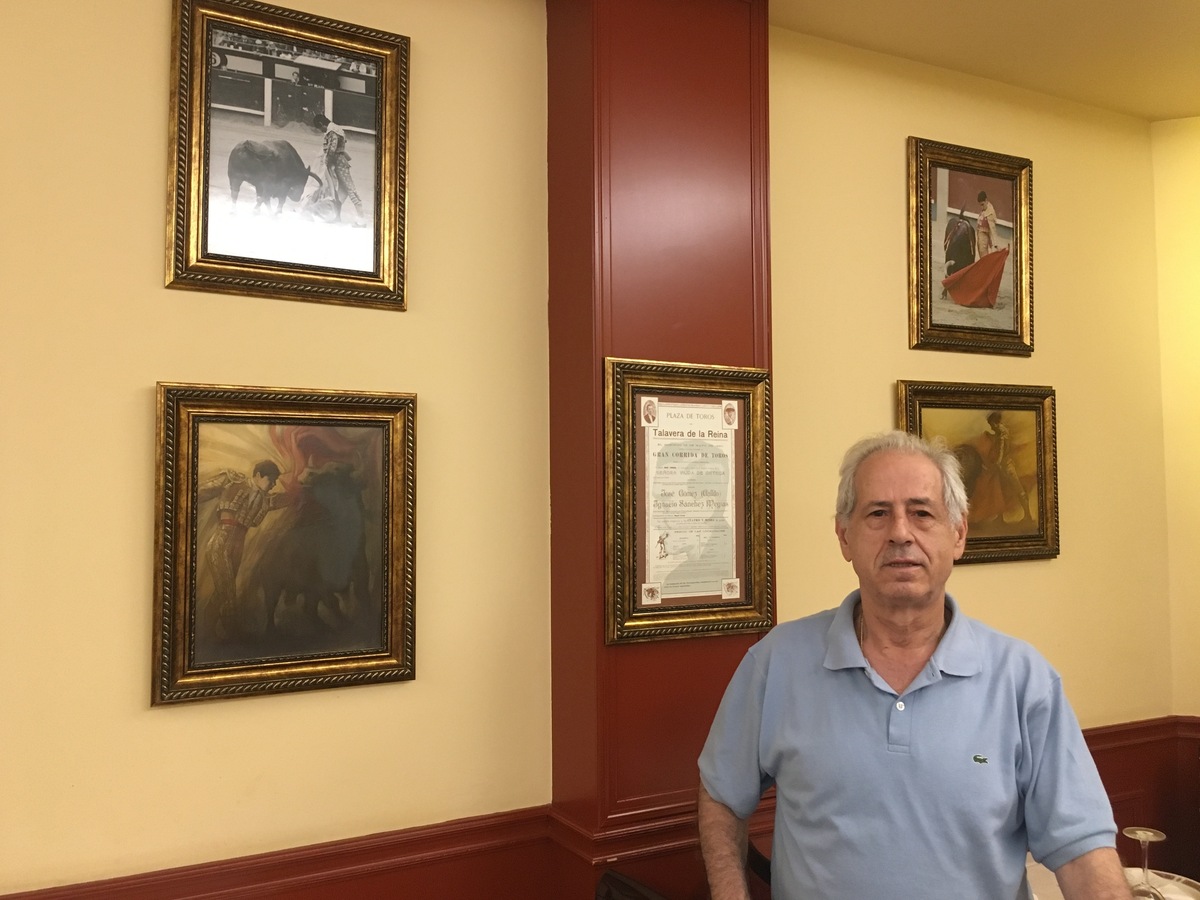 Yet as public perception toward bullfighting shifts in Spain (it's already illegal in the autonomous region of Catalonia and in the Canary Islands), some gastronomists say the bull's meat is actually more organic than the meat bought in grocery stores.

"It's the most ecological meat in the world," says Ismael Díaz, a nutritionist and gastronomic expert who has written a book on the topic. "In no other meat industry in the world is the animal as well taken care of, or as protected, as the fighting bull. That is, until he enters the ring."

Díaz says that, historically, the corrida (or the "run") was done with bulls on their way to the slaughterhouse; the more aggressive bulls were used in fights as entertainment. Once killed, the bull's meat was given to the matador, who would take the meat back to his hometown, where it would be made into a stew for the whole village to feast on.

"Bulls were used for their meat before they were used for the fight," says Díaz. "But that changed over the years. The fighting bull evolved into a species of its own with specific characteristics, and its secondary function became that of its meat."

At Casa Toribio, a variety of cuts from the bull's meat are available, but the most popular dish is the rabo de toro, or the bull's tail. Anta says it is impossible for customers to know what bull they'll be eating that particular day — the restaurant has hundreds of frozen bulls waiting to be cut and cooked. He says he buys bull meat from about 100 bullfighting plazas across the country — and even some in Portugal. That amounts to hundreds of fighting bulls a season, which lasts from March to November. Madrid's plaza alone sends Anta about 500 bulls each year.

The meat from a fighting bull is "unique," says Anta. "The smell, the taste ... it's as if we spoke of a free-range chicken versus a chicken bought at the grocery store. Right now, we have seven of the bulls that fought against [famous Spanish bullfighter] José Tomás. We want to advertise them online, in case someone wants to eat them. I'm even going to invite the bullfighter himself."

Díaz said some parts of the meat are especially sought after when people eat fighting bull — traditional folklore says that the bull's testicles increase fertility.

"For a long time, meat from a fighting bull was considered an energizing meat," says Díaz. But he added that it wasn't seen as a specialized dish until recently, when it became part of a larger trend to eat more organically.

Bulls bred for bullfighting are grass-fed, live in spacious fields and are particularly well taken care of, says Díaz. They also live a longer life than animals bred for human consumption — five to six years, as opposed to the average 18 months. Díaz argues that eating meat from fighting bulls is "more ethical" than eating meat that comes from slaughterhouses, where animals often grow up in cramped spaces, are injected with hormones and don't get to see the light of day.

"The fighting bull lives a completely privileged life, until its horrible death," says Díaz, who recognizes that the animal "suffers stress" when it enters the ring. He says that while the tense fight can affect the taste of the meat, there are treatments cooks can apply to the meat that improve the taste. "So what's better," he asks, "a good life with a difficult death, or a limited life with a death that's a bit less cruel?"

Neus Aragonés at the Barcelona-based Association for the Defense of Animal Rights (Asociación Defensa Derechos Animal) says that, contrary to what some people believe, bulls "don't live like kings."

"They're abused even before they enter the fighting ring," she says. "At 9 months old, they're already tested for their aggressiveness by being provoked. Breeders want to see which bulls get angrier."

Aragonés' organization opposes bullfighting but is not against eating meat; it defends the right of all animals to live a good life. She says eating the meat of an animal who faced a "cruel death" and a "questionable upbringing" is not ethical. And, she argues, meat from fighting bulls shouldn't be considered ecological.

"They're just sticking the 'ecological' label on it because they know that people are now more concerned with what they're eating," says Aragonés. "The bullfighting lobby is very powerful, and they're afraid of losing that tradition."