Accessibility links
Dairy Ice Cream, No Cow Needed: These Egg And Milk Proteins Are Made Without Animals : The Salt Some startups are making synthetic versions of animal proteins for use in foods from smoothies to baked goods. The goal: to reshape the food supply without the environmental footprint of livestock. 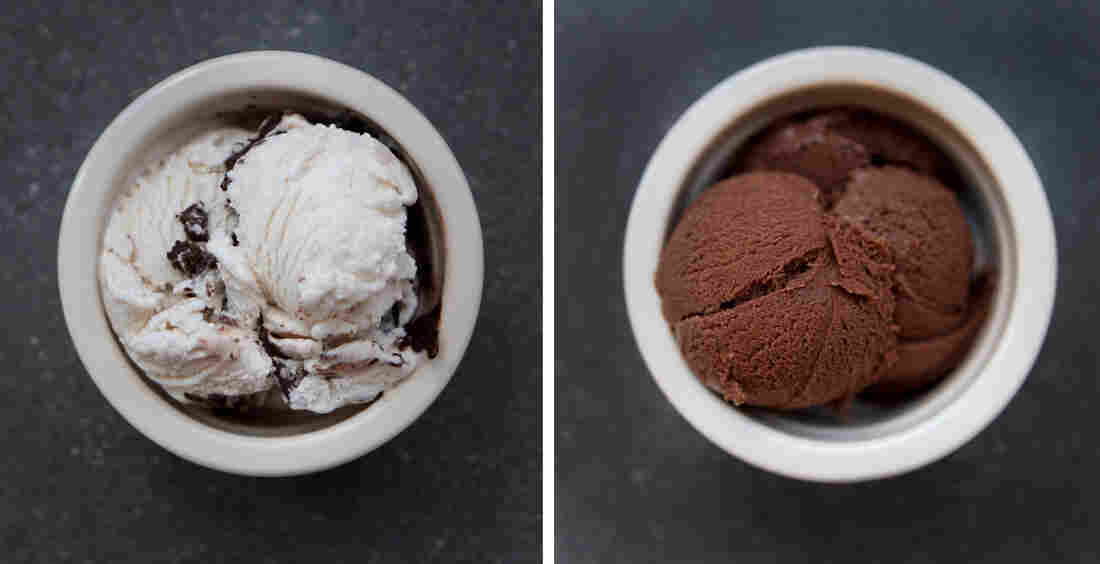 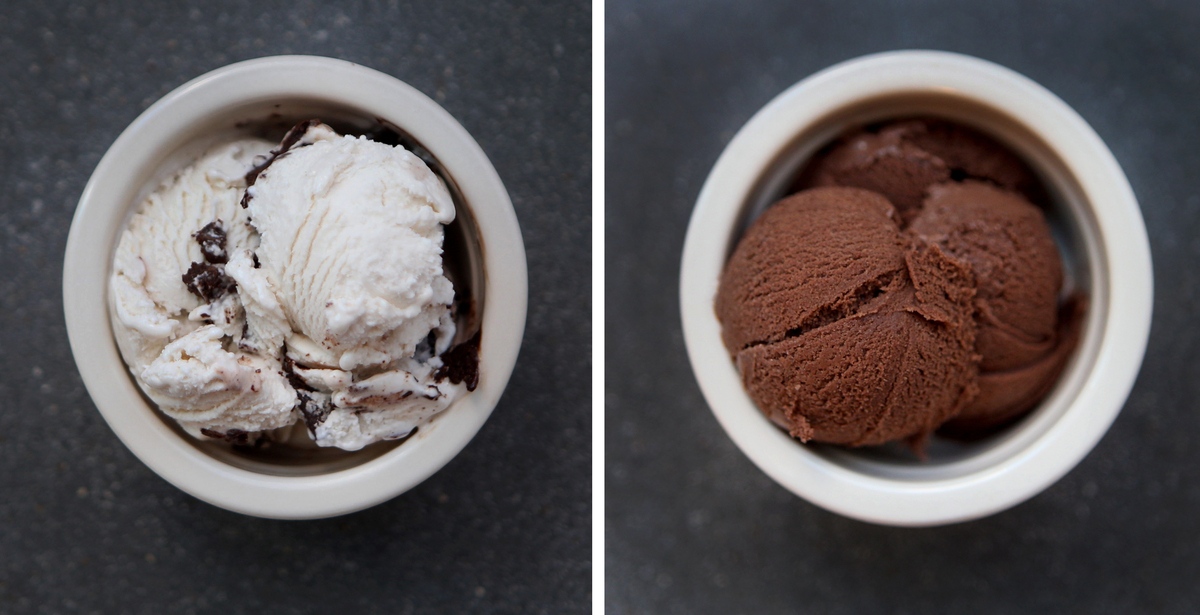 Earlier today, I ate a scoop of chocolate ice cream – creamy and pleasantly fatty feeling in my mouth. This would hardly seem newsworthy, except for the high-tech ingredient that made my frozen treat go down so smoothly: dairy proteins produced in a lab, no cows needed.

The realm of plant-based meat substitutes has gotten a lot of buzz lately. Think the Impossible Burger and Beyond Meat – companies that use biochemistry to mimic the taste and texture of meat using plant-based ingredients. There's another frontier along these lines – start-ups that use microbes to create egg, dairy and other animal proteins without the animals.

"If you can produce just the proteins that you want without keeping a living animal alive, that's going to be a lot more efficient, so it's better for the environment," says Bruce Friedrich of the Good Food Institute, which promotes plant- and cell-based alternatives to animal protein. And he says as the technology scales up, it should be a lot cheaper to produce proteins this way, too.

Among the early entrants in this field is Perfect Day, producer of the aforementioned ice cream. The company took the genetic code for the main proteins in whey, a byproduct of cheese-making, then had it artificially synthesized into a molecule of DNA – so the process is "totally animal free," says Perfect Day co-founder Ryan Pandya. Then they genetically engineered microbes to produce the same proteins through fermentation.

"The process is really simple," he says. You take a tank of microbes, feed them, and they turn into milk protein. "Then you separated it out with filtration and drying and you're done."

Why focus on whey? In frozen desserts, whey protein provides velvety texture – Perfect Day released its ice cream in a limited run of about 1,000 3-pint boxes as a sort of proof of concept to introduce consumers to its technology. (Bonus: It's also lactose free.)

But the company's goal is actually to become an ingredient supplier to all the food companies that rely on whey to boost protein levels in a range of foods, from smoothies to power bars. The target audience goes beyond vegans — to everyone.

"Rather than try to compete with all these big food makers that are otherwise just going to buy a ton of whey protein from factory-farmed cows, we can actually give them a better supply chain and in so doing, we can have a lot more impact than we would on our own," Pandya says.

Other companies looking to shake up the food supply include Motif Ingredients, which launched earlier this year with $90 million in investor financing. It aims to produce alternatives to dairy, egg and meat proteins using microbial fermentation and supply them to food makers.

Clara Foods is using a similar synthetic biology process to create egg white proteins, including a highly soluble protein that would be used in sports drinks and other beverages. That could hit the food market early next year, says Ranjan Patnaik, vice president for technology strategy and operational excellence. Another protein in the pipeline could be used as egg whites — think vegan meringue and baked goods.

"We have made all kinds those of pound cake, meringue, other recipes" in their development lab in the San Francisco Bay Area, Patnaik says.

If all this sounds a little too futuristic, consider this: Much of the cheese produced today already relies on the same technology in the form of rennet, an enzyme used to curdle milk. Cheese makers used to get it from the stomachs of slaughtered calves but for many years now, much of the rennet used for cheese has been made via microbial fermentation, notes Friedrich.

Given that this technology is already out there, and that the synthetic animals proteins produced are exact genetic replicas of the real thing, the companies making them don't anticipate major hurdles with regulators at the Food and Drug Administration.

Some critics — like Dana Perls, senior food campaigner for the environmental group Friends of the Earth — are concerned that the FDA will not give sufficient scrutiny to this new wave of synthetic proteins. Perls worries that the adoption of these proteins will make our food supply even more dependent on the fruits of biotechnology. "The real solution for climate chaos and animal welfare problems are the truly organic, plant-based sources of proteins and organic solutions for less and better meat," Perls says.

Many dairy farmers are also not on board. For one thing, says Alan Bjerga of the National Milk Producers Federation, an industry group that represents dairy producers, products made with synthetic dairy proteins may not have the same nutritional profile – such as vitamin and mineral content — as those made with milk from real cows.

"We want to make sure that consumers are very informed that these are not nutritionally the same," he says.

Others in the food industry, however, have embraced the new start-ups. Archer Daniels Midland, a global ingredient and food processing company, has partnered with Perfect Day. Fonterra, a multinational dairy giant based in New Zealand, is an investor in Motif Ingredients. And Clara Foods has teamed up with Ingredion, which supplies ingredients to the food and beverage industry, among others.