Accessibility links
Watergate Salad: A Fluffy Green Bite Of Washington, D.C.'s Past : The Salt Thirty years ago, if you walked into a deli in Washington, D.C., you might find a dish called "Watergate Salad." And it's not bad. Soft. Tangy. You can taste why this caught on. And why it went away. 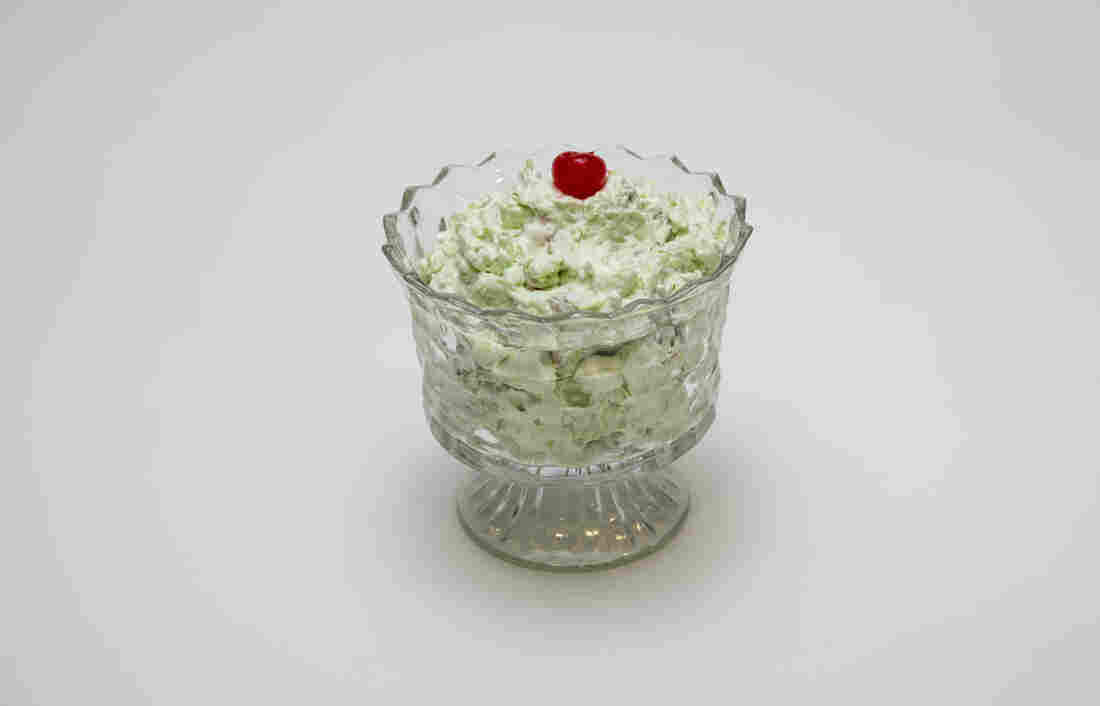 We may think of salads as leafy and green, but the Watergate salad is only the latter. A combination of pistachio pudding mix, canned pineapple, whipped cream and chopped nuts, the salad is the shade of a Shamrock Shake ... sort of a minty chartreuse. Tyrone Turner/WAMU hide caption 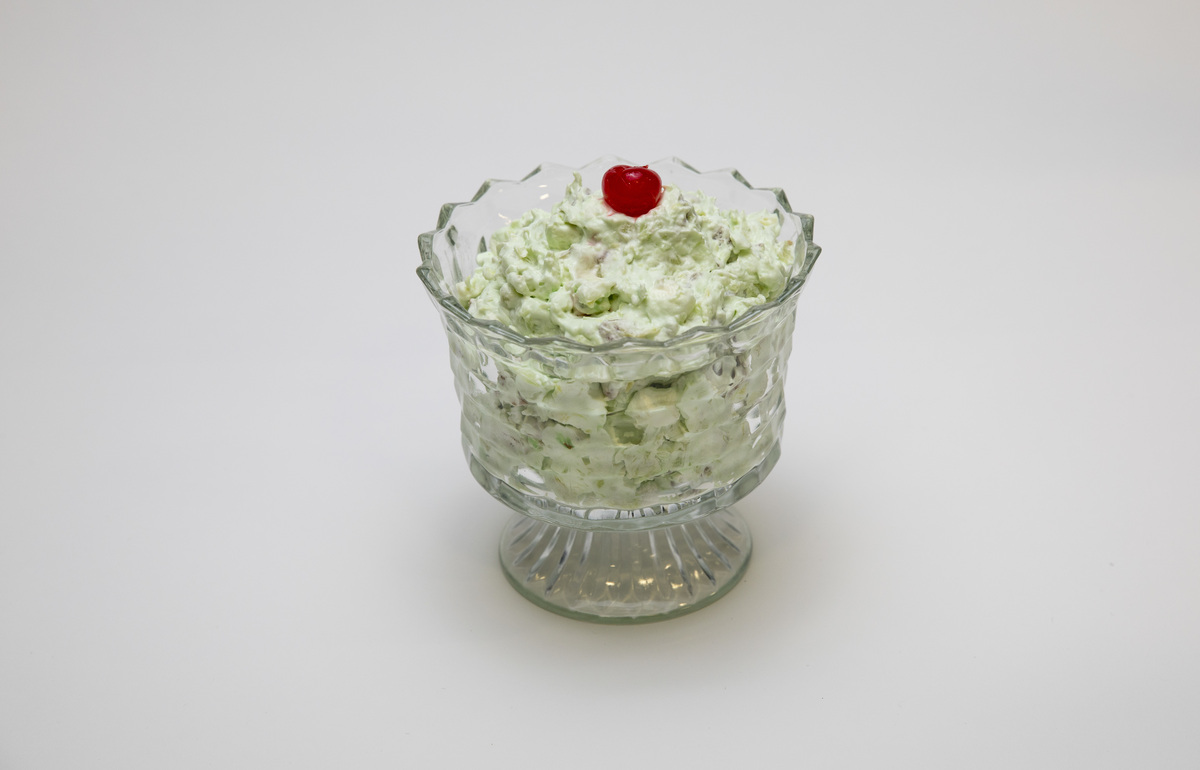 We may think of salads as leafy and green, but the Watergate salad is only the latter. A combination of pistachio pudding mix, canned pineapple, whipped cream and chopped nuts, the salad is the shade of a Shamrock Shake ... sort of a minty chartreuse.

"There are three enduring mysteries of the Watergate," says Joseph Rodota, author of The Watergate: Inside America's Most Infamous Address. "No. 1: Who ordered the break-in of the Democratic National Committee headquarters? No. 2: How did the Watergate get its name? No. 3: Who created the Watergate salad?"

You'd be forgiven for not knowing what a Watergate salad is. The dish has largely vanished like 18 minutes of audio tape. That prompted listener Martha Fessenden of Northwest Washington to write to WAMU's What's With Washington and ask, "Why can you no longer buy Watergate salad in D.C.?"

"I've lived here 30 years and I remember when I first moved here you could find Watergate salad offered in many different places — delis, supermarkets, probably at the Watergate Hotel, I'm not sure. But now it's very hard to find," Fessenden says.

So what was the Watergate salad, who invented it, and how did it get its name? We investigated and found a cloudy history that's about much more than food. It's a story of political scandal, corporate marketing and the ever-changing idea of luxury.

What Is The Watergate Salad?

We may think of salads as leafy and green, but the Watergate salad is only the latter. A combination of pistachio pudding mix, canned pineapple, whipped cream and chopped nuts, the salad is the shade of a Shamrock Shake ... sort of a minty chartreuse.

Its origins date to long before the plans for the Watergate complex were even drafted.

"It goes all the way back to the turn of century when you had a remarkable thing happen: instant gelatin," says Susan Benjamin of Harpers Ferry, W.V., a historian of sugar and sweets and founder of True Treats Historic Candy.

Instant gelatin allowed for marshmallows, gelatin molds and what Benjamin calls "other fun foods that you would take to picnics or that you would give for desserts" to be made at home with far less effort than before. From this, fluffy, jiggly new desserts — called "delights" and, later, "salads" — took shape in America's kitchens.

The Watergate salad's roots can be seen in any number of fruit-and-fluff desserts that came from the instant gelatin boom. One precursor is a whipped cream and pineapple dish whose recipe was published in a newspaper in Kansas in 1913. (Incidentally, that's the same year Richard Nixon was born.) There's also a similarity between Watergate salad and ambrosia salad, which is still found in many markets.

But the particular mix of ingredients that became the standard Watergate salad likely originated with the Jell-O brand, which introduced a line of pistachio pudding mix in 1976. This was two years after President Richard Nixon resigned, and the Watergate scandal was still fresh in Americans' minds. (A spokesperson for Kraft, which now owns Jell-O, once said pistachio mix was introduced in 1975.) In the past, confectioners were keen to offer a taste of the zeitgeist — think of the Charleston Chew and the Baby Ruth candy bars. Not so with Jell-O. They called the dish the pineapple pistachio delight. The company didn't attach the Watergate name to the dessert until 1993.

"You wouldn't want to be associated as something that was as divisive and difficult as Watergate," Benjamin says. "Now we might see it as fun and flip, but it wasn't. It was a really serious and tumultuous time."

Despite this, the Watergate salad name stuck. Rumors spread that the salad was a specialty of the Watergate hotel's restaurant, but there's no evidence it was ever served there. The pastry shop in the Watergate complex has not served such a dish, either, though they told us they've made something similar as a special request.

So Where Did The Name Come From?

Before the Watergate salad, there was the Watergate cake, a similarly green-hued dessert made with pistachio pudding in the mix and sometimes in the icing.

The first recipe for Watergate cake we could find (apart from a newspaper headline that stretched a metaphor beyond common decency) was from Hagerstown, Md., in September 1974, a month after Nixon resigned. The Hagerstown Daily Mail declared the cake "the newest thing on political and not-so-political menus." It credits the dish to Christine Hatcher, who says she "got the recipe from a friend who got it from a friend."

The Watergate salad likely took on its name because it was so similar to the cake. As for where the cake got the name, the Daily Mail article offers a clue. Hatcher suggests it was called Watergate "because of all the nuts that are in it." In later printings of the recipe, people joked the the cake earned the name because it, too, had a cover-up.

The name "came out of the mouths of the people who ate it," Benjamin says. People were having fun at the height of a national scandal. Newspaper columnists and late-night hosts made jabs at the Nixon administration, so why couldn't a home cook?

"It could've been a Democratic partisan who wanted to make sure the Watergate name lived on, because the Republicans were very intent on turning the page," Rodota says.

The cake and the salad were hits, and not just in Washington. Recipes were printed around the country. (My mom says the salad was a staple of parties where she lived in Missouri in the 1970s). Rodota says a 1975 shortage of pre-Jell-O brand pistachio pudding in Washington was blamed on the combination of a bad pistachio crop and a huge number of home cooks making Watergate cake.

Whether or not the dessert's moniker was a partisan ploy, the word Watergate continues to echo through politics. Practically every new political scandal gets the suffix "gate." Nixon's former White House counsel, John Dean, still makes appearances on cable news and in Congress. But while you can find references to Watergate in the news, if you stop by a potluck in Northern Virginia or a downtown D.C. deli, you'll likely not see a Watergate salad. (We did find one, at a market in Bethesda, Md., a D.C. suburb, but it was a chicken salad. The manager didn't know the origin of the name, but said they sell about 50 pounds of it a week.)

Where Did It Go?

One word came up several times when we did taste tests of Watergate salad and its precursors: grandma.

"It tastes exactly like something my grandma made," one of my colleagues at NPR member station WAMU said.

The recipe is very mid-century. The Jet Puffed marshmallows, the Jell-O pudding, the Cool Whip (conveniently all these brands are now owned by Kraft) even the groovy green shading — they all scream retro chic. It's a throwback to a time when powders and whips had a tinge of science and sophistication ... a time when a modern building like the Watergate was Washington's premier address.

And as the country's politics moved on from Watergate, its tastes moved away from the Watergate salad. The salad became a food grandmas made, a staple of church basements. The convenience of powdered pudding mix gave way to more artisan and organic experiences. The excessive sweetness of a molded salad is no longer the taste of the day.

And the ingredients in a Watergate salad no longer seem futuristic or luxurious.

"This is [considered] the lower-class food — we don't want to do lower-class things," Benjamin says.

But maybe the Watergate salad hasn't completely vanished; it could have just gone underground. Kraft says more than 100,000 people have visited its recipe for Watergate salad online.

How To Make A Watergate Salad

Mix all ingredients together. Chill until ready to serve.

A version of this story was first published by NPR member station WAMU, where Gabe Bullard is a senior editor and where Tyrone Turner is a visuals editor.

A previous version of this story incorrectly said John Dean had been President Richard Nixon's attorney general. He was Nixon's White House counsel.