Accessibility links
Agriculture Must Change To Prevent Catastrophic Warming : The Salt The way we produce food and manage land must change radically if humans hope to avoid catastrophic global temperature rise, according to a new report by the United Nations panel on climate change. 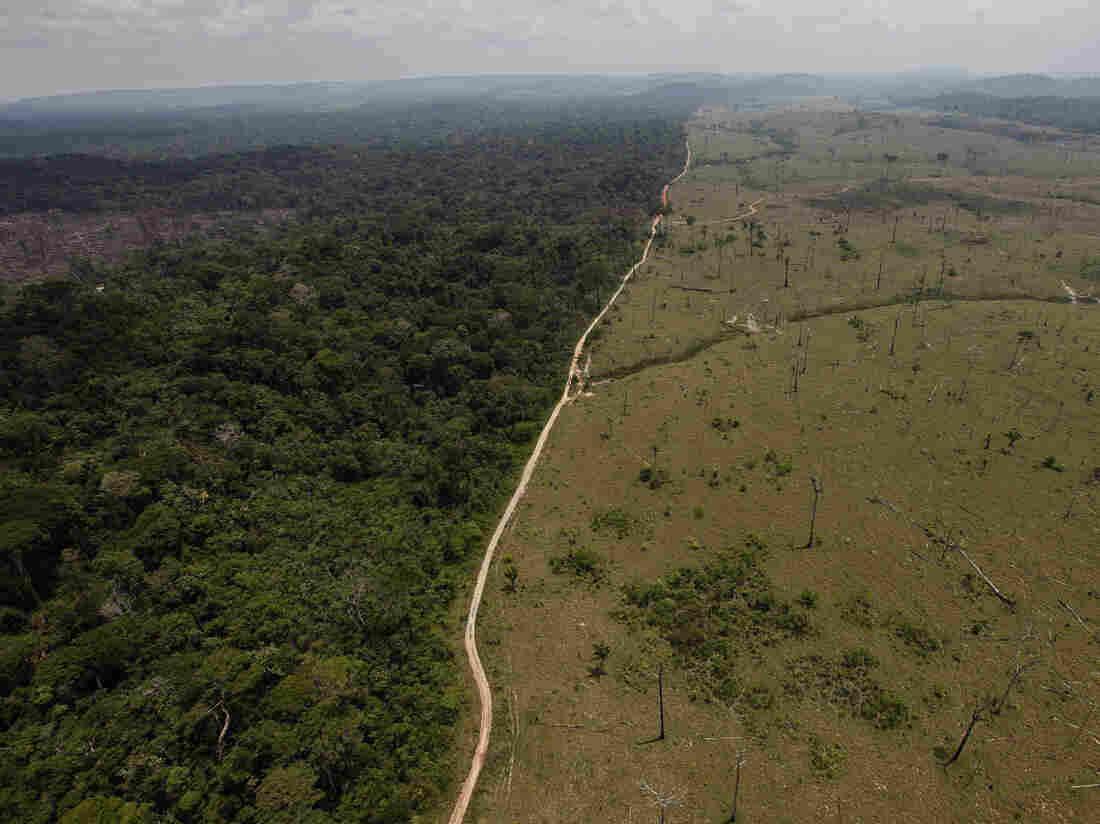 Large swaths of forest have been cut down in Brazil in recent decades to make room for farming. Deforestation contributes to global warming, and reversing it will be necessary to avoid catastrophic climate change. Andre Penner/AP hide caption 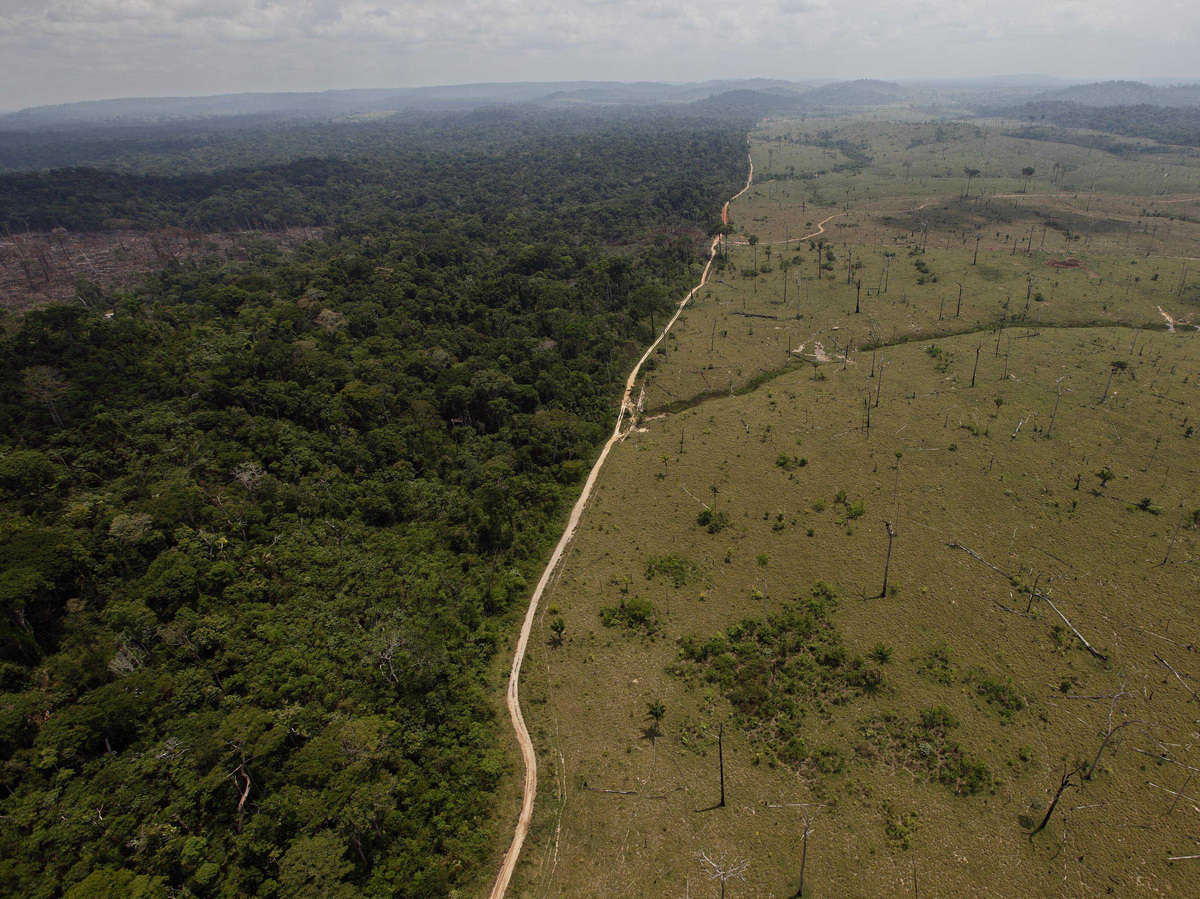 Large swaths of forest have been cut down in Brazil in recent decades to make room for farming. Deforestation contributes to global warming, and reversing it will be necessary to avoid catastrophic climate change.

Humans must drastically alter food production to prevent the most catastrophic effects of global warming, according to a new report from the United Nations panel on climate change.

The panel of scientists looked at the climate change effects of agriculture, deforestation and other land use, such as harvesting peat and managing grasslands and wetlands. Together, those activities generate about a third of human greenhouse gas emissions, including more than 40% of methane.

That's important because methane is particularly good at trapping heat in the atmosphere. And the problem is getting more severe.

"Emissions from agricultural production are projected to increase," the authors warn. "Delaying action" on reducing greenhouse gas emissions, they continue, "could result in some irreversible impacts on some ecosystems."

This is the latest in a series of reports from the U.N.'s Intergovernmental Panel on Climate Change. The new report adds weight and detail to a warning put out by the same panel of scientists last fall, in which they sounded the alarm about the inadequacy of the pledges countries have made so far to reduce greenhouse gas emissions.

At that time, the panel broadly suggested that farmland would need to shrink and forests would need to grow to keep Earth from getting more than 1.5 degrees Celsius hotter than it was in the preindustrial era. Global temperatures have already risen about 1 degree Celsius in the past 150 years.

To meet that temperature target, global greenhouse gas emissions will need to fall by 40% to 50% in the next decade. Scientists say the only way to achieve that reduction is to significantly increase the amount of land that's covered in trees and other vegetation and significantly reduce the amount of methane and other greenhouse gases that come from raising livestock such as cows, sheep and goats.

The new report offers some broad suggestions for how countries might achieve that. For example, for countries that have lost tree cover in the past century, reforestation can help suck greenhouse gases out of the air, while also preventing soil from drying up. Reducing food waste can also help: The report estimates food waste accounts for as much as 10 percent of human-induced greenhouse gas emissions. (Check out these tips on reducing food waste in your own home.)

Don't Toss That Sour Milk! And Other Tips To Cut Kitchen Food Waste

Controlling emissions from agriculture is also a food-security issue. Greenhouse gases from food production create a vicious cycle: As Earth gets hotter, farming gets more difficult in many places, which forces farmers to clear more land to grow food.

"Climate change, including increases in frequency and intensity of extremes, has adversely impacted food security and terrestrial ecosystems, as well as contributed to desertification and land degradation in many regions," the report's authors write.

If greenhouse gas emissions continue to increase, as they are doing today, it will exacerbate those challenges and eventually make it all but impossible to control global warming without creating serious food shortages.

The U.N. panel is the latest group of experts to grapple with a global conundrum: how to reduce greenhouse gas emissions from agriculture, deforestation and other land use without creating food shortages or displacing people whose livelihoods rely on practices that are unsustainable globally.

Scientists and economists have been studying the effects of our diets on the environment for years. There's a growing consensus that a transition to a more plant-centered diet would help.

Currently, about 50% of the globe's vegetated land is dedicated to agriculture — and about 30% of cropland is used to grow grain for animal feed. Given how much land it takes to grow food to feed livestock, meat production is a leading cause of deforestation.

A report released last month by the World Resources Institute finds that if current dietary patterns continue, an additional 593 million hectares — which is almost twice the size of India — would be needed to feed the projected 9.8 billion people (the anticipated population) by 2050.

Right now, agriculture generates an estimated 25% of annual greenhouse gas emissions, according to the WRI; that's when you combine food production and the land-use changes associated with farming, such as clearing vegetation and plowing.

If current trends continue, but agricultural productivity does not increase beyond 2010 levels, the WRI report concludes that most of the globe's remaining forests would need to be cleared to feed the world. And the globe would exceed the greenhouse gas emission targets set by the Paris climate agreement.

"The WRI estimates that if people in the U.S. and other heavy meat-eating countries reduced their consumption of beef (and other meat from ruminants) to about 1.5 burgers per person, per week, it would 'nearly eliminate the need for additional agricultural expansion (and associated deforestation), even in a world with 10 billion people.' "