Accessibility links
Food Allergies: Why European Restaurants Are Much More Vigilant Than In U.S. : The Salt Dining out can be fraught with hidden perils for people with food allergies. European allergen disclosure laws have made restaurants highly aware of the issue. But U.S. rules lag. 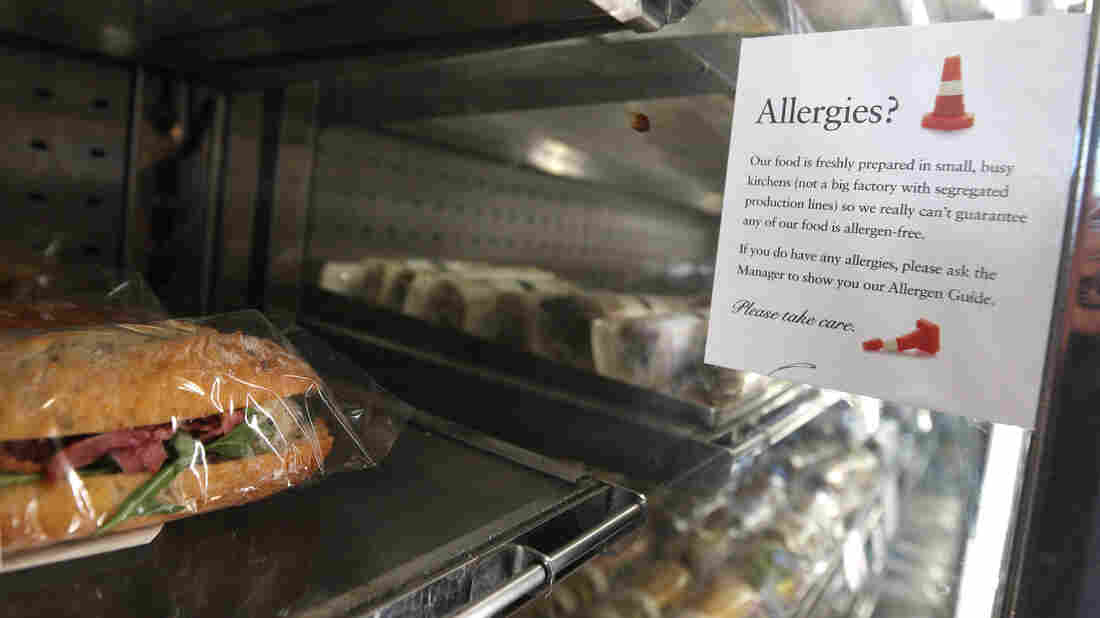 An allergy warning notice is displayed next to food in a branch of Pret A Manger in central London. Pret A Manger is working to have full ingredient labeling in all its British shops by the end of 2019. Yui Mok/PA Images via Getty Images hide caption 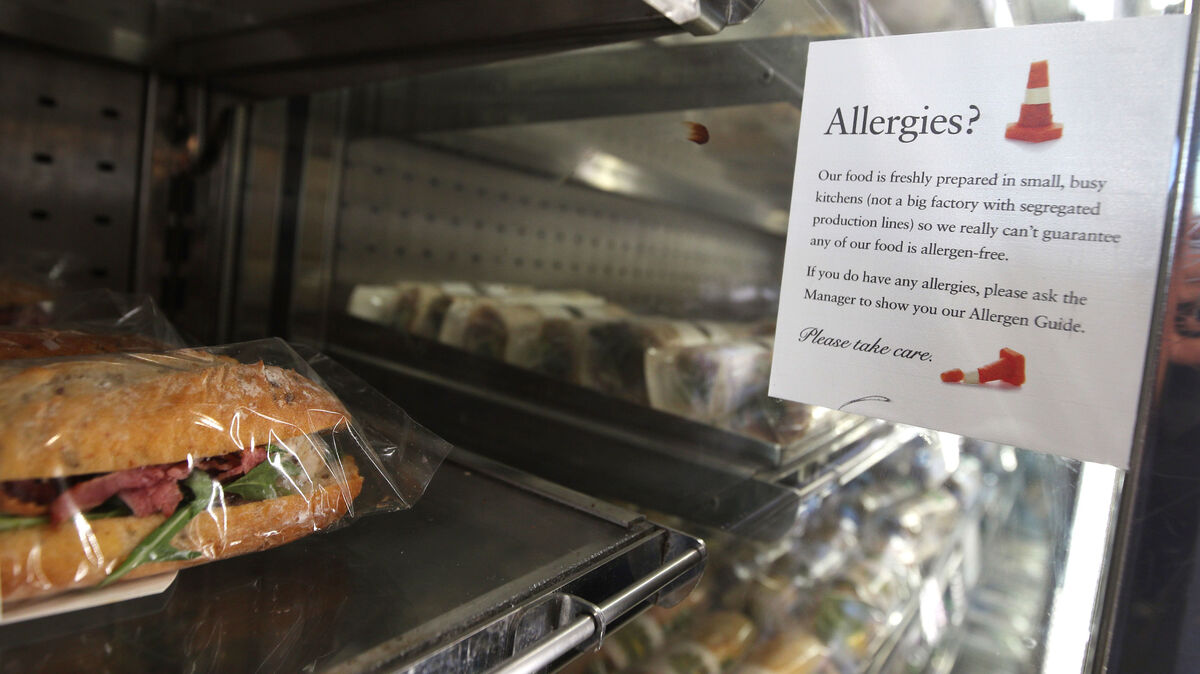 An allergy warning notice is displayed next to food in a branch of Pret A Manger in central London. Pret A Manger is working to have full ingredient labeling in all its British shops by the end of 2019.

During a visit to London last month, I was pretty excited to try the slow-cooked curries at Masala Zone. Almost as soon as I sat down, however, the manager told me he didn't want my business.

As is fairly routine in London restaurants, he asked if anyone at the table had any food allergies. As it happens, I'm allergic to peanuts. He explained that the Indian restaurant grinds peanuts into various sauces and can't guarantee that traces won't show up in any dish on the menu. He handed me a small card stating that it's Masala Zone's policy not to serve people with peanut allergies. "We do not operate in a surgical environment," the card states.

"It doesn't cost you anything to ask about allergies," says Joseph Johnson, a waiter at Kym's, a high-end Chinese restaurant in London's financial district.

That points to a difference between Europe and the U.S., says Carina Venter, an allergy specialist at the University of Colorado School of Medicine. Americans mostly worry about peanut allergies, along with perhaps intolerances for gluten and lactose, she says. In Europe, there's greater awareness of the range of potential allergies. 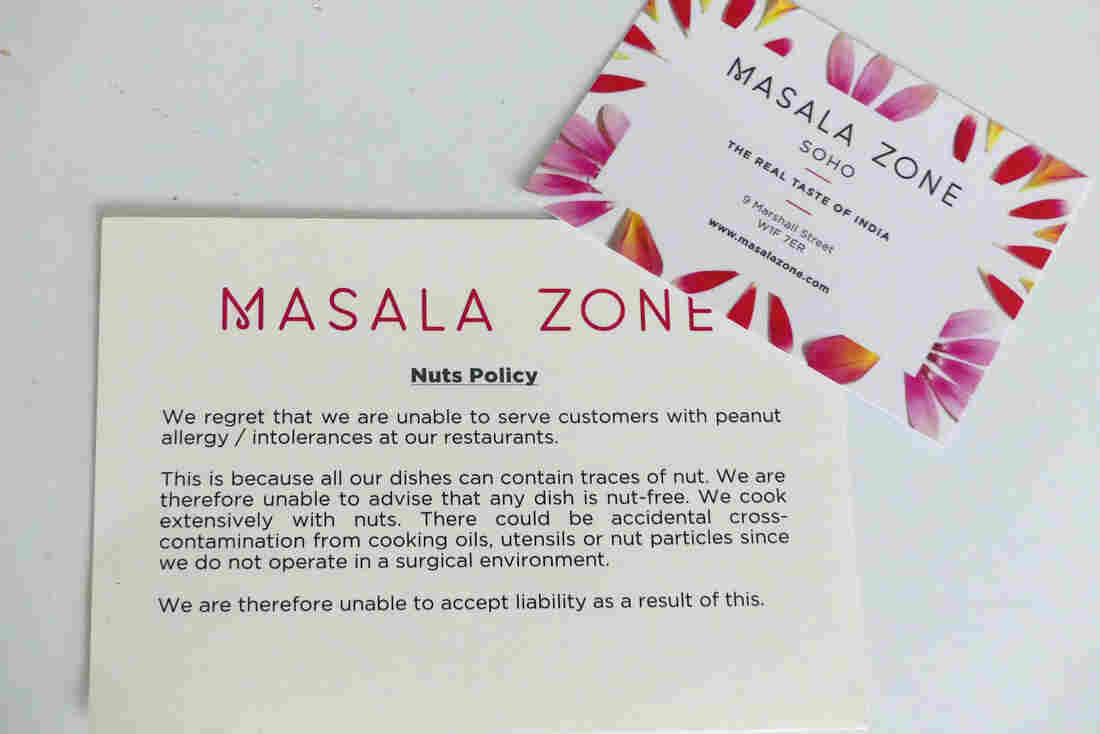 When dining at London's Masala Zone, the author received this card stating that it's the restaurant's policy not to serve people with peanut allergies. Alan Greenblatt for NPR hide caption

Five years ago, the European Union enacted a regulation requiring food preparers to list or label any of 14 allergens, from peanuts and tree nuts on down to mollusks, sulfites and lupin. Enforcement is uneven, but it's not unusual to encounter a menu that lists all 14 allergens, pointing out which dishes contain one or more of them. In the U.S., food manufacturers are required to list the eight most common allergens on packaging, but some increasingly common allergens — like sesame — don't need to be noted, though the FDA is rethinking that.

"I don't think the European system is necessarily flawless," Venter says, "but it would be good if, in America, we could go toward a more European way, where it is mandated to provide more information."

There's no federal regulation requiring allergen disclosure in restaurants. Massachusetts, Maryland and Rhode Island require restaurants to display food allergy awareness posters, which include reminders to patrons to inform servers of any allergies they may have. Michigan and Virginia require restaurants to have at least some personnel trained in food safety, including allergen awareness. In a statement to NPR, the National Restaurant Association said it now offers its members training on allergens as part of its food safety program, noting that U.S. restaurants know it's both an increasing concern and a potential liability issue.

"It's not hard to find supporters of food allergy issues in Congress or state capitols around the country," says Lisa Gable, CEO of Food Allergy Research & Education, a nonprofit focusing on food allergy awareness and research. "Individual states are often more responsive because their regulatory authority is more limited and it's easier to prescribe changes in policy or regulation on a smaller scale." At the federal level, she says, there are far more stakeholders involved.

In America, the onus typically falls more on diners themselves. Some menus contain requests, usually printed in a small font, that ask diners to inform their servers if they have any allergies. It's not routine, as it is in England, for servers to ask their customers proactively.

A sign at the condiment bar at Krua Thai in Salt Lake City warns that the chili powder is very spicy and informs patrons that gluten-free soy sauce is available upon request. If customers are worried about whether dishes may contain peanuts or shrimp, however, it's up to them to ask. "They let me know," says manager Ying Inxaysi. There's never been a problem, she says.

I haven't let a lifetime allergy to peanuts stop me from indulging my love of peanut-heavy cuisines such as Thai and Chinese. I never order dishes I know will be laden with peanuts, such as kung pao chicken or pad thai. I do ask waiters which dishes have peanuts. Pretty regularly, I double-check after the food is served, asking whether what are clearly cashews or minced garlic might be peanuts.

I've never had a reaction so strong that my throat closed up and put my life at risk, but I've gotten rashes and nausea. One time, a stray peanut found its way onto my plate at a Chinese restaurant in San Francisco. My brow swelled up, giving me a temporary but startling resemblance to Frankenstein.

Not too long ago, I encountered an enchilada sauce so dark and rich at a Mexican restaurant that I asked whether it might be mole, a sauce that sometimes contains peanuts. It's this kind of uncertainty that mandatory labeling practices would alleviate, Venter says.

"I'm not necessarily sure we will prevent more deaths, but people's quality of life would improve because they would have the freedom to eat at more places," she says. "In America, sadly, we have to refer our patients to eat in places like McDonald's, which do have the allergen information available because they're also in Europe."

In England, allergy awareness has been heightened by the death of Natasha Ednan-Laperouse in 2016. The 15-year-old was severely allergic to sesame and died after eating a baguette from Pret A Manger. Following a highly publicized inquest, Great Britain recently adopted "Natasha's Law," which by 2021 will require restaurants in England, Wales and Northern Ireland to list all ingredients on prepackaged foods. That law allows a two-year phase-in period, but Pret A Manger is working to have full ingredient labeling in all its British shops by the end of the year.

The U.K. government has been looking at food safety as part of its broader drive to promote healthier choices, says Chris Banks, spokesman for UKHospitality, a trade group based in London. Customers, meanwhile, want more information about what they're eating and where it came from.

"The more proactive approach from businesses in recent years has more likely been a result of continuing dialogue with customers, rather than one single event," Banks says.

I can't say I was asked about allergies at every single London restaurant I visited during a trip earlier this summer, but it happened in most places, including a diner-style chain called Bill's that served things like burgers and salads. The waitress there said if she didn't ask and I had a reaction, she'd go to prison.

She's wrong. There's no law requiring restaurants to ask about allergies, but it has become standard practice.

That helped me out at Kym's. Since I told Johnson about my allergy, he had the kitchen leave out a sauce containing peanuts that otherwise would have been added to my wonton soup — a dish I never would have expected to contain peanuts.

Alan Greenblatt, a former NPR reporter, is a regular contributor to The Salt.