Accessibility links
Do Your Wurst. Food Pun Haters, The Yolk's On You : The Salt If you relish puns, then you'll love a new game that gives you two food-themed topics to blend into one deliciously bad joke. The food pun is so beloved, there's even one in the story of Adam and Eve. 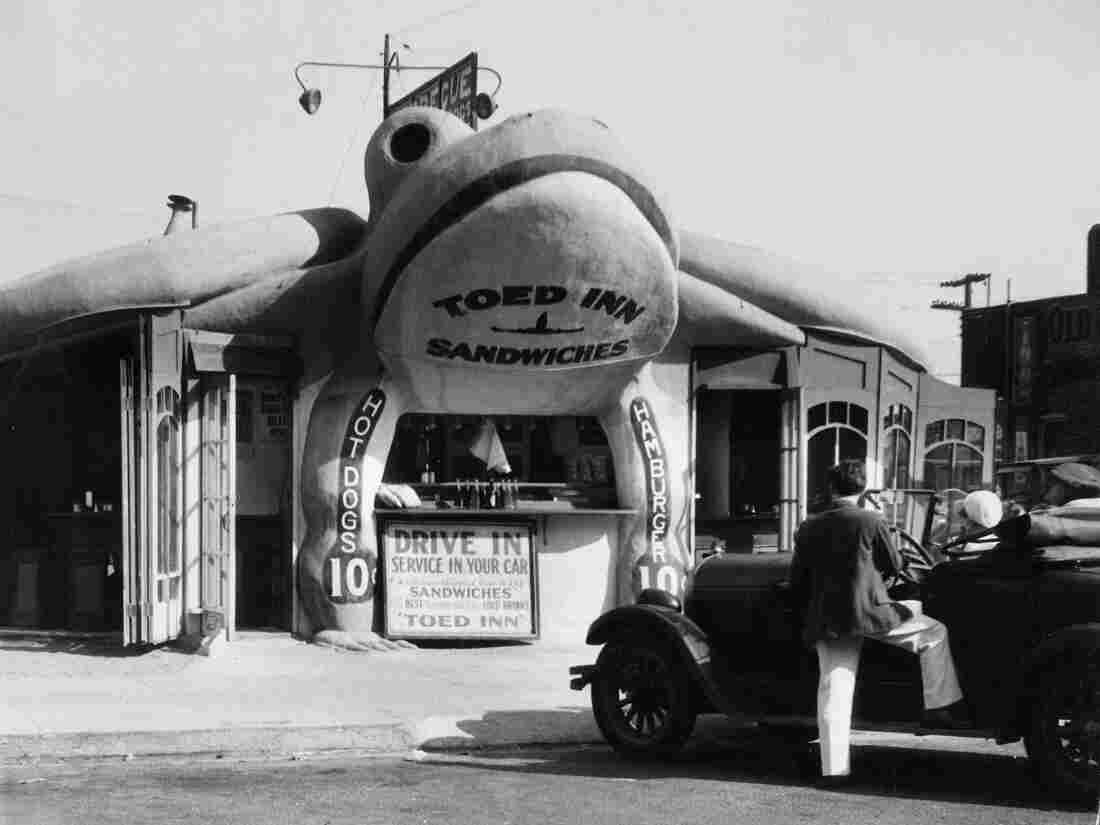 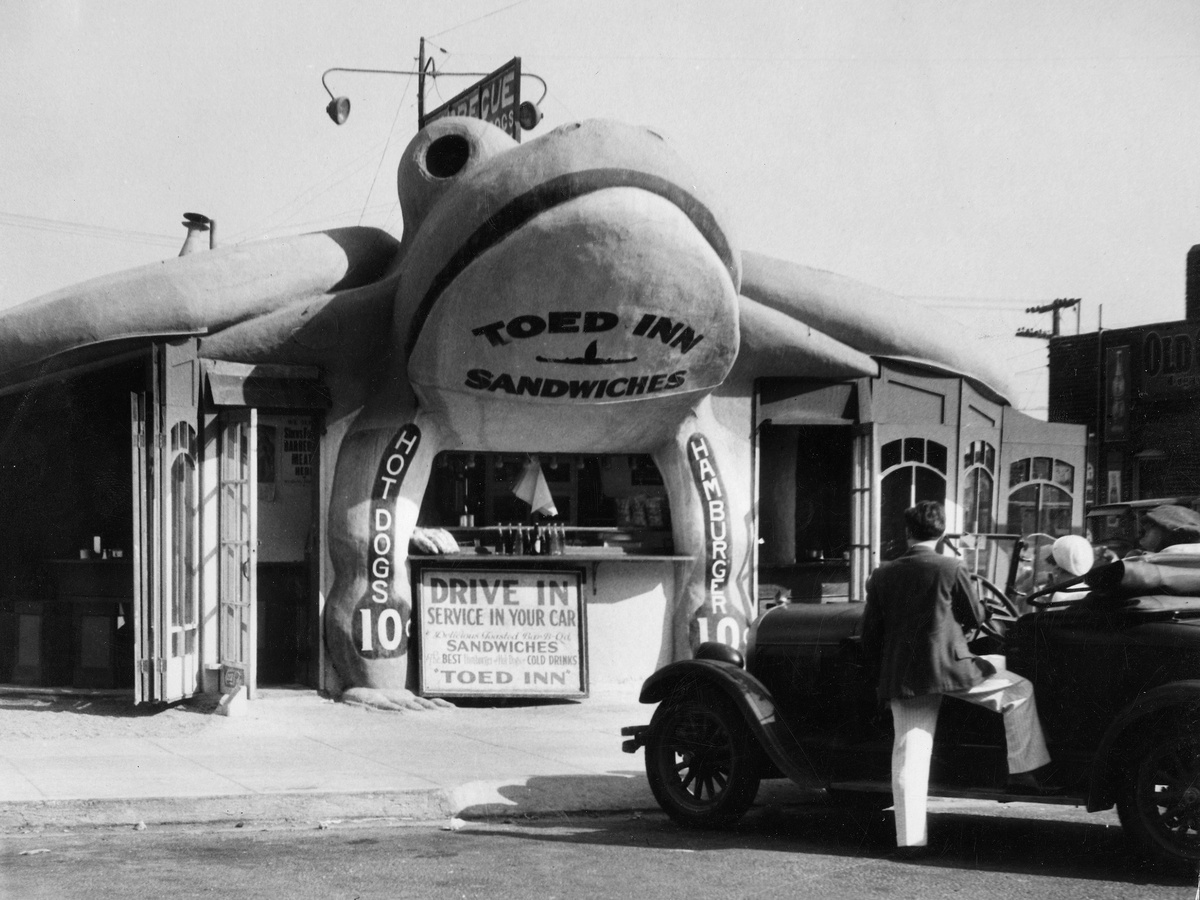 This toad-shaped sandwich bar called the Toed In, near Los Angeles in 1939, allowed you to grab a bite to eat while your car got serviced. There's a lot of wordplay going on here: the toad-shaped building, the "towing in" of the car, and the stepping or "toeing" in for a snack. Good job, punsters!

Q: How do you measure the weight of crackers?
A: In grahams.

Q: Why do melons prefer weddings?
A: They cantaloupe.

Q: Why did the Pale Ale feel out of place in the winter?
A: It wasn't the right saison.

If you're groaning aloud and enjoying every groan, if you relish jokes about "shellfish" and "sea bries," and if you're convinced that you can out-matcha anyone when it comes to food puns, this game is for you.

The brainchild of Rodney Dangerfield impersonator Fred Firestone and his stand-up comic daughter Jo Firestone, Punderdome started out — and continues to be — a popular live pun competition in Brooklyn. Building on the success of this monthly event that is attended by 400 diehard punsters from different backgrounds, the Firestones introduced a card game as a spin-off. This month, they launched an expansion pack called Food Fight where the prompts are tied to the theme of food. Essentially, players are given two prompts and asked to come up with a pun that includes both topics. To cite an example from their recent Facebook contest, the prompts were "Berries" and "Fast Food" and the winning entry was: "I refuse to eat McDonalds, that stuff is basically Boysen."

"Familiarity is the foundation people need in order for them to come up with puns," he says. "Once people know the topic, the jumping point to pun is easy. People get excited about food, rather than something esoteric which is hard to pun on. There is junk food, health food, food you eat with your hands, local food, and so on. Even a cup of tea can be the source of any number of puns."

The Great Emancipator and author of at least one atrocious tea pun would agree. According to Old Abe's Jokes: Fresh From Abraham's Bosom:

Mr. Lincoln was walking up Pennsylvania Avenue the other day, relating 'a little story' to Secretary Seward, when the latter called his attention to a new sign bearing the name of 'T. R. Strong.' 'Ha!' says old Abe, his countenance lighting up with a peculiar smile, 'T. R. Strong, but coffee are stronger.' Seward smiled, but made no reply.

Excruciatingly ungrammatical though the pun is, that description of Lincoln's "countenance lighting up with a peculiar smile" is priceless. It captures that half-secretive, half-joyous and fully smug expression radiating from the face of punsters who have just been struck by an especially awful pun that they're all set to unload on their pained listeners. Equally, Seward's long-suffering response — one can almost see the thinness of his smile — will resonate with those constantly subjected to these outbursts of punspiration. But not all tea puns are that weak. Of a more sophisticated vintage is the one brewed by the Romantic poet Percy Bysshe Shelley, who puckishly conflated his notorious atheism with his love of tea by claiming that yes, he was an atheist, but he was also "a théist" (thé being French for tea).

The food pun has an ancient history that snakes all the way back to the apple in the Adam and Eve story. It comes as a surprise to many that the book of Genesis does not name the offending fruit. The apple wormed its way in thanks to the brilliant, pun-loving Roman theologian Jerome, who, when translating the Hebrew Bible into Latin, exploited the fact that the Latin words for evil and apple were the same: malus. Over time and many interpretations and translations later, the 'Tree of the Knowledge of Good and Evil,' came to be known as the apple tree.

From presidents to poets and saints to atheists, few can resist the lure of the food pun. Certainly not The Salt's editors, whose eclectic puns range from the slangy ("Holy Guacamole! Avocados Are Pricey And It's The Pits") to the Shakespearean ("Wherefore Art Thou, Gnocchi-o? Fair Verona Has Another Enduring Love Story"). Cheesy, corny, salty, instantly gratifying and dangerously addictive, puns are the fast food of language. And though dismissed as the lowest form of humor, a well-turned pun can hit the spot in a way that's hard to surpass. Of all the thousands of lofty tributes penned on Charles Dickens' bicentennial in 2012, one of the most elegant was a New Yorker cartoon of old Boz at a bar encountering his first martini and this routine question from the bartender: "Olive or twist?"

If that ranks among the best of puns, among the wurst are those coined by Dickens' fellow Londoner, Boris Johnson. The shambolic new British prime minister and Brexit grandee delights in coining puns that are as fishy as his Euroskeptic facts. One of his favorite props is that staple of the English breakfast, the kipper. It reeks of Englishness and allows him to take jabs at the right-wing British party UKIP. Recently, he ridiculed a new European Union regulation demanding that kippers be packed in "plastic ice pillows." Brussels had passed no such rule, but Johnson has never let facts get in the way of a joke. Waving a kipper in the air like a whiffy freedom flag, he declared, "We will bring the liberal voters back. We will bring the Brexit party voters back. And we will bring the kippers back. I've been working up to that punchline as you can tell."

"A bad pun produces an eye-roll," says Fred Firestone. "Our objective is to produce side splits. You swing away at the world. Sometime you hit 'em sometime you don't."

One couple who hit a home run were the Amundsens, newbie egg farmers from Duluth, Minn., who decided to name their farm the Locally Laid Egg Co. For maximum impact, they proceeded to have the risqué slogan, "Get Locally Laid" splashed across the side of their car. It brought them laughs, winks, frowns, a welcome frisson of controversy, and a stream of curious customers. Instead of spending thousands of dollars on marketing, they let their pun do all the work for them. As Lucie Amundsen, who came up with the name, said, "No one would have given us a second look if we'd called ourselves Amundsen Farms ... but our sassy name broke through the media clutter out there and got us a lot of laughs."

Punderdome's Food Fight pack with its "50 groan-worthy" puns (including the three we've quoted at the opening to this piece) is a mix of the good, the great and the indifferent. One leafy one — What do you call a guy who loves lettuce? Arugula guy" — harkens back to a gaffe made in 2007 by then Sen. Barack Obama. While campaigning in a corn and soybean farm in Iowa and bemoaning the rise in crop prices, Obama asked his audience, "Anybody gone into Whole Foods lately and see what they charge for arugula?" At the time, Iowa didn't have a Whole Foods, and no one had heard of the expensive peppery green. The mortifyingly elite gaffe came to be known as Arugula-gate, but can one blame Obama? Like every barnstorming politician, he was just trying to be "arugula guy."

In the age of fusion food and the globalized palate, the bilingual pun has a special caché. A leading practitioner is Salman Rushdie. In his novel, Midnight's Children, he plays with the Arabic djinn and English gin to exploit not just the homophony of the two words but the fact that both spirits live in bottles. "Never believe in a djinn's promises, my son!," says the narrator's alcoholic father who is rumored to be possessed by a malevolent spirit. "Let them out of the bottle and they'll eat you up."

An inveterate punster, Rushdie's twitter tagline is the signature Popeye gag, "I Yam What I Yam," which, of course, is a starchy pun on Yahweh in Exodus intoning "I am what I am." Which brings to mind another Old Testament-themed interlingual gem, this one involving tofu and Hebrew. According to an article in the Jewish Review of Books, the novelist Saul Bellow was once in a restaurant when his wife prodded him to order healthily. In response, Bellow protested, "Enough of this tofu va-vohu!"— tohu va-vohu being the Hebrew phrase from Genesis describing the formless chaos out of which God created the universe. Again, homophony aside, the wobbly geometry of tofu captures the protoplasmic essence of new life, which adds another comic layer to the pun.

Not everyone can be as quick-witted as Rushdie or as erudite as Bellow. But as pitch-perfect was a victorious chef Bobby Flay announcing that it ain't all that easy to "beat Kebabi Flay," after besting a competitor in a kebab challenge. The skewering of a Western name and an Eastern food to get kebabi was so unexpected yet so seamless that it worked beautifully, revealing a fine ear and an even finer sense of humor.

Earlier this month, at their 102nd show in Brooklyn, N.Y., the Firestones officially launched the Food Fight expansion pack. One can only imagine their delighted audience laughing, cringing and clapping along to puns about how the prosciutto felt cured after the doctor's visit and how peanuts don't fly coach because of not enough legume.

We could go on, but perhaps it's time for a wrap (another Punderdome original). The thing about puns is that people love them but love to moan about them too. As comedian Rodney Dangerfield might have said, puns get no respect.

Except when they do.

It's hard to think of a more witty and dignified comeback than this one delivered by the civil rights leader Matthew Perry, who was named the first African-American U.S. District judge in South Carolina in 1975. Turned away by the proprietor of a segregated restaurant with the routine insult, "We don't serve coloreds," he quietly replied, "I'm not looking for greens."