Accessibility links
Meet The Man Who Guards America's Ketchup : The Salt Deep inside the company that dominates the business of ketchup-making, there's a man who makes sure that every squeeze of this all-American condiment comes out just right. He's the Ketchup Master. 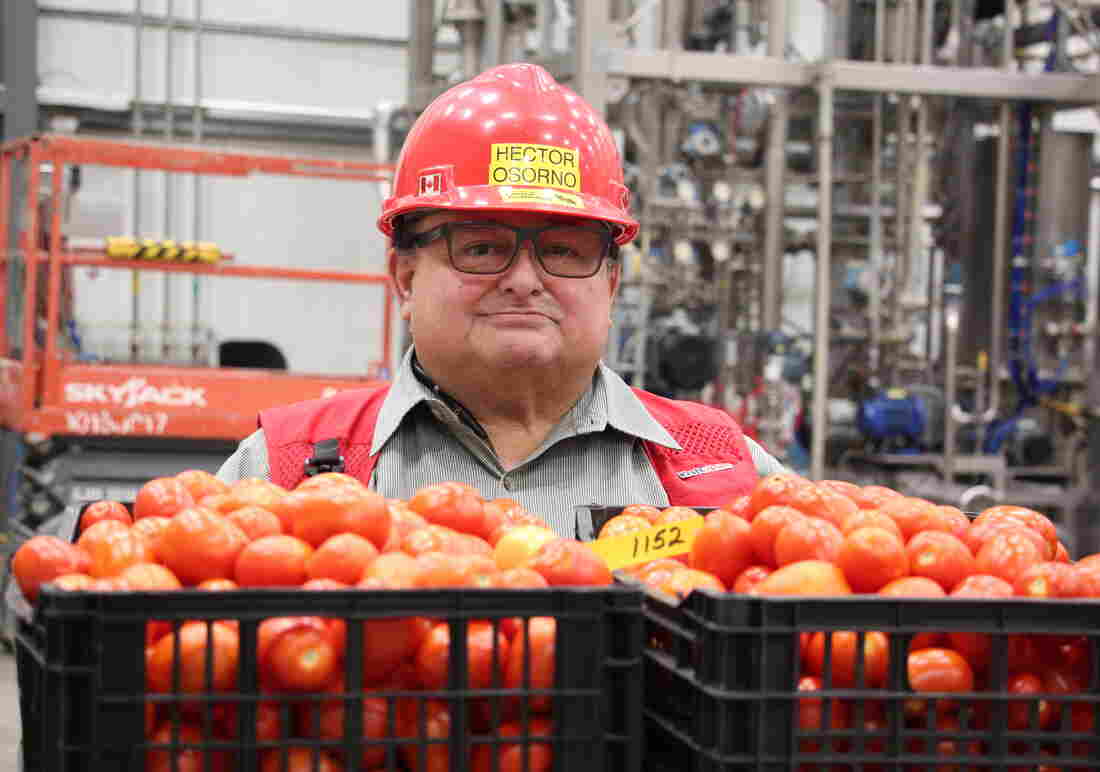 Hector Osorno is the Kraft Heinz Ketchup Master, whose job it is to make sure around 70% of the ketchup sold in America tastes the way it should. Dan Charles/NPR hide caption 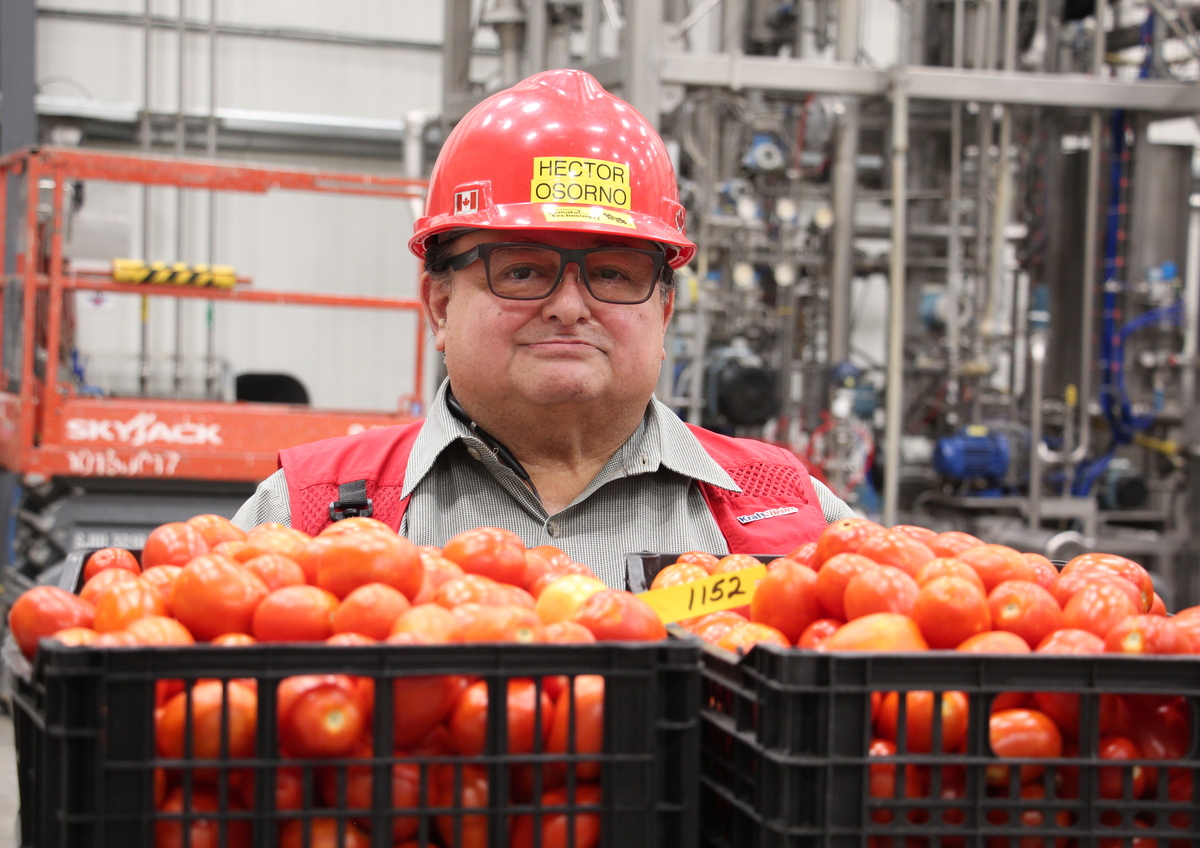 Hector Osorno is the Kraft Heinz Ketchup Master, whose job it is to make sure around 70% of the ketchup sold in America tastes the way it should.

My search for the secrets of American ketchup began in a sun-baked field near Los Banos, Calif.

The field didn't look like much at first. Just a wide, pale-green carpet of vines. Then Ross Siragusa, the head of global agriculture for the company Kraft Heinz, bent over, lifted up some of the vines, and revealed a mass of small, red fruit, too many to count.

Each acre of this field, Siragusa tells me, will produce about 60 tons of tomatoes. That's up from about 40 tons per acre just 15 years ago. The tomatoes themselves are a mix of tomato varieties that are specially bred to produce red, thick ketchup.

A mechanical harvester approaches at the pace of a brisk walk. It's a giant machine, a factory on wheels. It collects a swath of tomato plants, shakes fruit loose from the vines, and sends a stream of bright red tomatoes into a big truck driving alongside. The scale and speed of the operation boggles the mind.

Within a day, a processing plant in Los Banos will turn these tomatoes into paste. Weeks or even months later, the paste will become the central ingredient in ketchup. 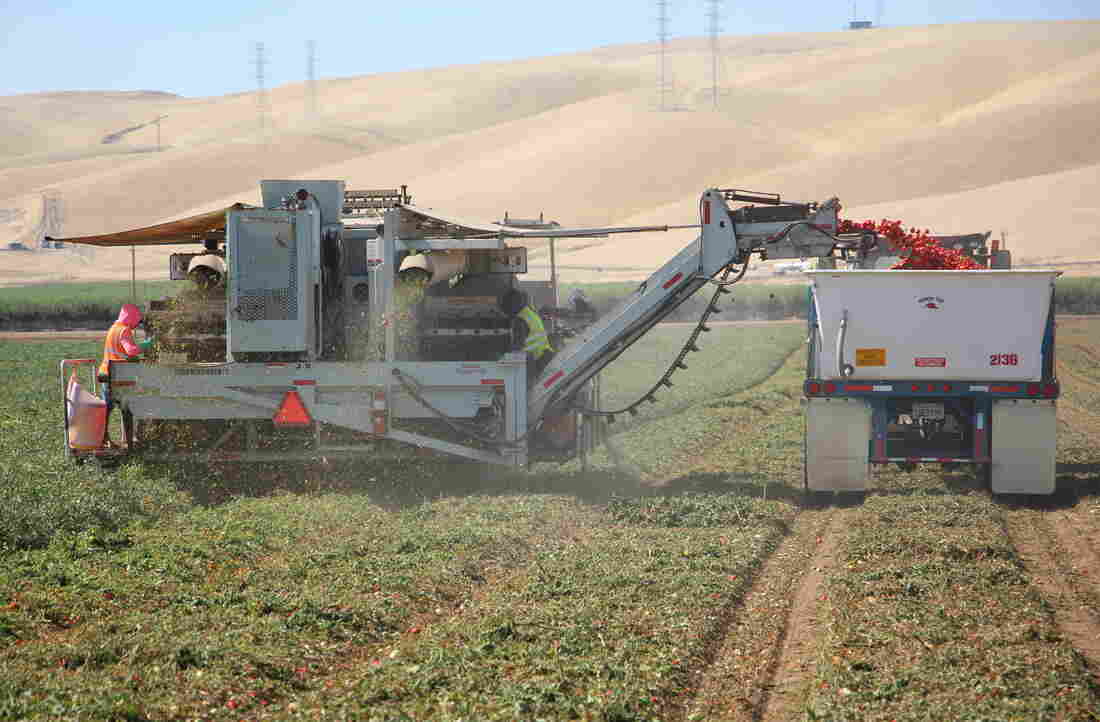 California's Central Valley grows about 12 million tons of tomatoes each year for processing into canned tomato products. They are harvested by machine. Dan Charles/NPR hide caption 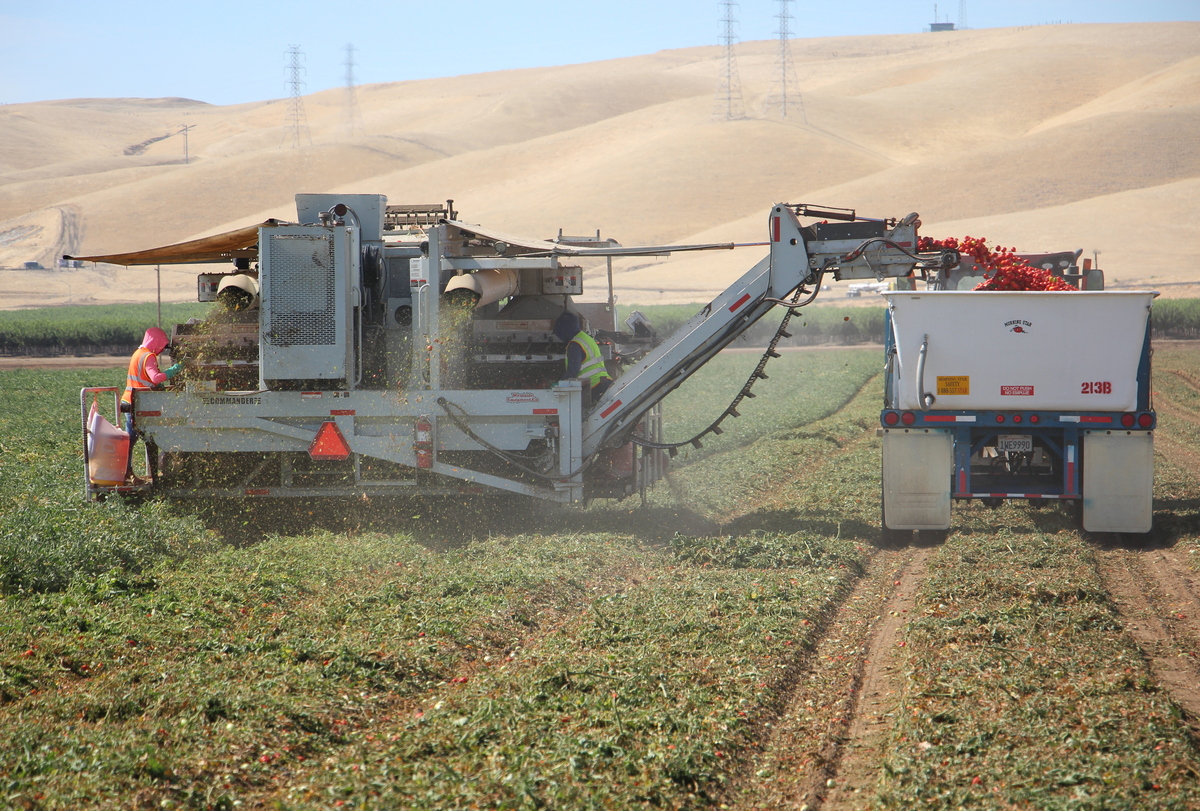 California's Central Valley grows about 12 million tons of tomatoes each year for processing into canned tomato products. They are harvested by machine.

Nothing in this scene, from the tomato varieties to the mechanical harvester, existed when the Heinz company created the classic version of American ketchup many decades ago.

And I wonder, has ketchup's taste changed, too?

Siragusa says that he doesn't know. But he knows somebody who would. A man named Hector Osorno. They call him the ketchup master, which is actually a formal title at Kraft Heinz. "He's completely obsessed [with ketchup]," Siragusa tells me. "He's got secrets that he won't divulge."

A few hours later, I meet Osorno. He's smiling the way people do when they're hiding delightful secrets.

"What makes you a ketchup master?" I ask him. "Is it your skill? Your knowledge?"

"I like to think that it is my skill. But it's probably my stubbornness more than anything else," he says. "I'm obsessive to do the right thing the first time."

Osorno grew up in Mexico, became an engineer, and started working at the Heinz company, now Kraft Heinz, more than 20 years ago. It's been all ketchup, all the time, ever since. He's in charge of making sure that each batch of Heinz ketchup comes out of the factory exactly as advertised.

I ask him my question about ketchup's taste. It's remained constant, Osorno assures me, although the Heinz recipe is slightly different in different countries. This created a minor crisis a few years ago, when the company had to come up with one version for all of Europe. Germans liked ketchup with more vinegar; the British version had always been spicier.

There was a time, Osorno tells me, when old-timers at Heinz thought that the taste of their American product was shifting a little. "They detected that something was changing, and adjusted accordingly," he says.

He won't tell me exactly what they adjusted, of course. "For that I'd need a letter from the president of the company, co-signed by the legal counsel," he says, shaking with laughter.

For some people, ketchup is a symbol of the problems with American food. It's highly processed, mass-produced, and full of sugar. Historian Gabriella Petrick certainly saw it that way when she started digging into the archives of the H. J. Heinz Company. 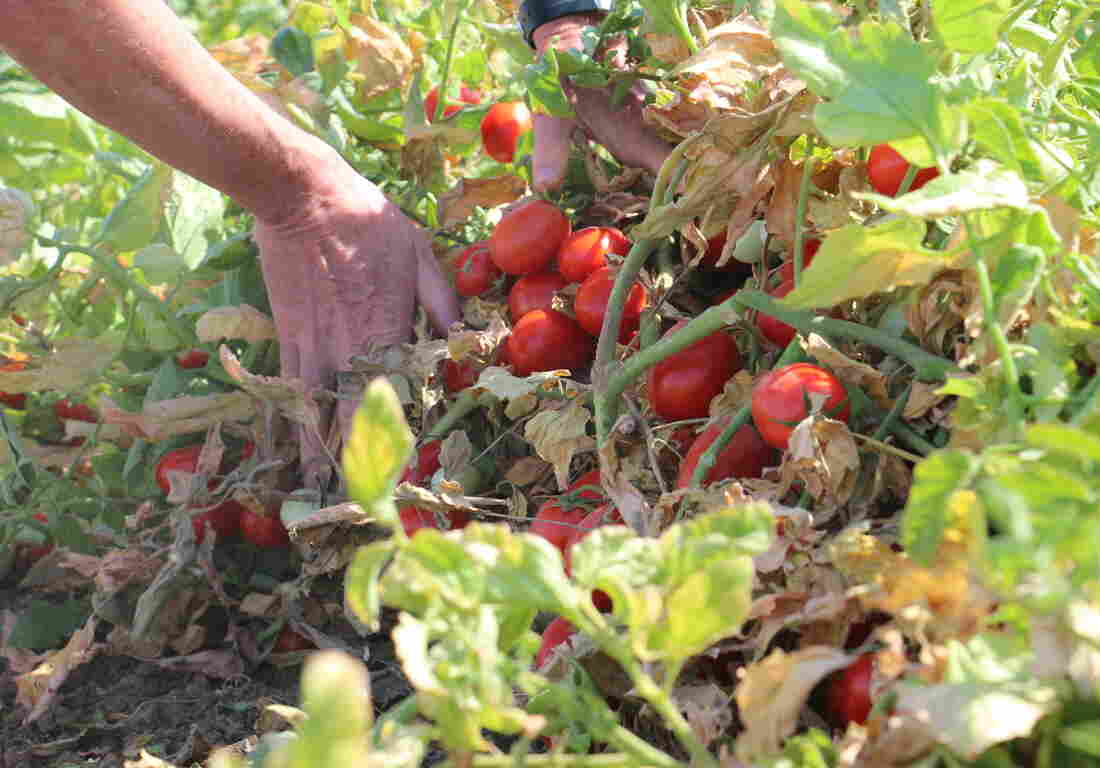 A single acre of this field can produce 60 tons of tomatoes. They're bred to produce thick, red paste. Dan Charles/NPR hide caption 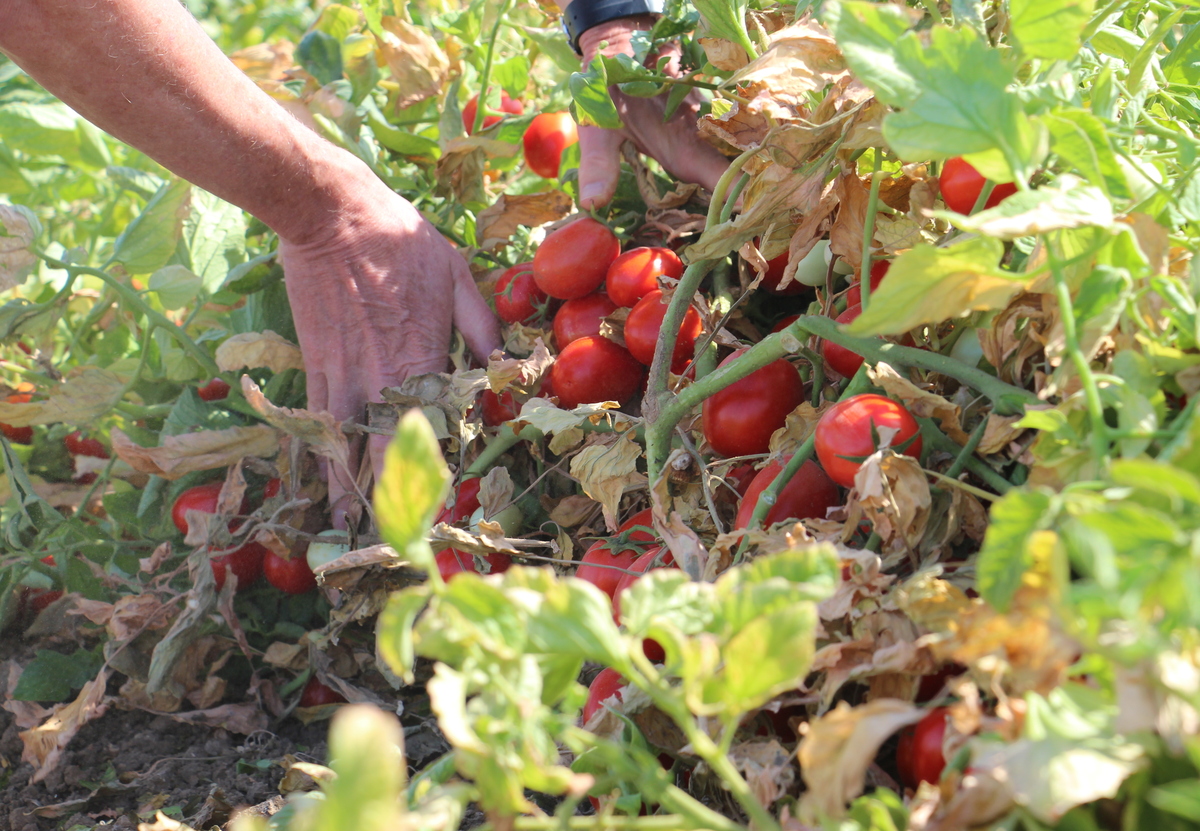 A single acre of this field can produce 60 tons of tomatoes. They're bred to produce thick, red paste.

"I'll be honest, I came to my subject as a complete food snob and jerk," she says. "I was going to show how awful Americans eat, and how terrible industrial food was!"

When Henry Heinz started his company in the late 1800s, there were all kinds of ketchup: walnut ketchup; grape ketchup; tomato ketchup. But over time, Heinz's version of tomato ketchup took over. "The company crafted a very particular product that now reshapes what we think of as ketchup," Petrick says.

It was a captivating mix of tomato sauce, sugar, vinegar and spices. Above all, it was thick and red. You couldn't make anything like it yourself. In fact, maybe you didn't really want to make it yourself. "Women used to make ketchup at home," Petrick says. "Why make watery ketchup when you can simply buy high-quality, super-thick ketchup?"

Petrick isn't quite so judgy about industrial foods anymore. "A lot of these products, I just learned to understand how important they were for people's lives, and how they made people's lives easier — women's lives in particular," she says.

Today, Kraft Heinz sells about 70% of America's ketchup, and it all comes from just two factories, one in Fremont, Ohio, and the other in Muscatine, Iowa.

But here in Los Banos, the center of tomato growing, Hector Osorno has set up a miniature version of those factories, just for research purposes. It's a room filled with stainless steel pipes and pumps and cooking vessels.

He and his colleagues use it to check the quality of the tomato paste that's being supplied to the company's big ketchup factories. "Every day, I'm making 18 batches!" Osorno says. "If we detect something that [the factories] didn't, we immediately notify them."

He's checking the ketchup so you don't have to.