Accessibility links
Saving California's Kelp Forest May Depend On Eating Purple Sea Urchins : The Salt Purple sea urchins are devouring the kelp forest off California's coast. To help the forest survive, researchers are trying to make these urchins a delicacy on menus at seafood restaurants. 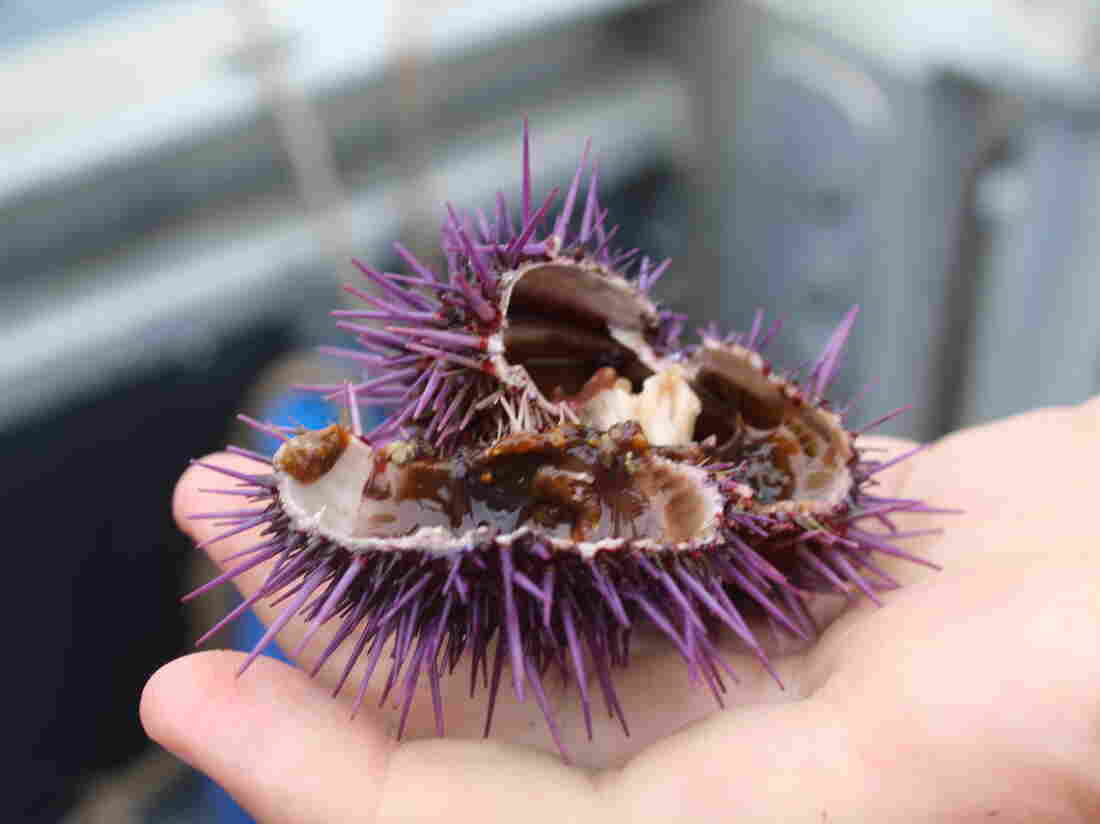 Since purple sea urchins have eaten up their food supply, many of them are empty inside. Erika Mahoney/KAZU hide caption 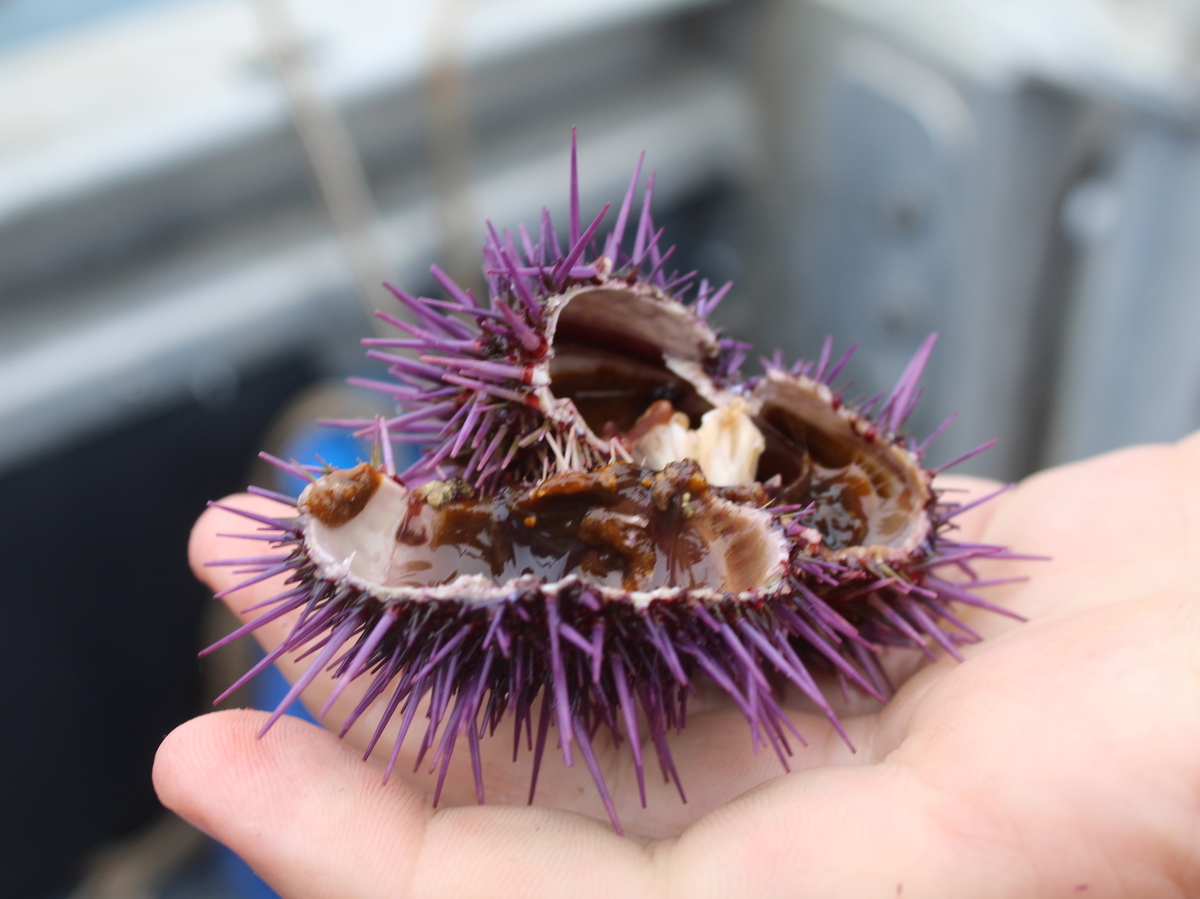 Since purple sea urchins have eaten up their food supply, many of them are empty inside.

A favorite dish for purple sea urchins living off the coast of California is kelp. Problem is, those kelp forests are shrinking dramatically and that's hurting the marine ecosystem. So a group of scientists ran an experiment to see if these sea urchins can themselves become a top menu item.

Just off the Monterey Peninsula, a boat sways in the ocean. Three divers get ready to jump in. They're students from Moss Landing Marine Laboratories, a graduate school for marine scientists. The assignment: Count purple sea urchins.

"Catch you on the flip side," says Shelby Penn.

Is Kelp The New Kale?

Is Kelp The New Kale?

Their professor, Luke Gardner, waits on deck. He expects they'll find plenty of urchins. And that's not a good thing.

"What they do is they just eat everything in sight," Gardner says.

These spiny creatures are mowing down California's kelp forests. Kelp is a vital part of the ecosystem. It provides food and shelter for numerous animals, including abalone, rockfish and sea otters.

The problem began around 2014. That's when Gardner says warmer ocean temperatures began affecting the reproduction of kelp. It's also when a disease killed off sunflower sea stars, a predator of purple sea urchins. The purple sea urchin population skyrocketed.

"So with the increase in purple sea urchins, what we've seen is a dramatic reduction in kelp cover, primarily in Northern California. But it's slowly creeping further south. And now we're starting to see a fair bit of it on the Central Coast," Gardner says.

Urchin barrens are areas that used to be full of kelp and are now full of urchins. One of these is below the boat. Diver Daniel Gossard takes video of it with a GoPro camera. The video shows rocks covered in spiny, ball-shaped creatures that can fit in the palm of your hand.

The problem with these guys is that when you open them up... there's nothing in there.

"The kelp was nonexistent," Gossard said on the boat ride back.

The divers didn't come up empty-handed. They bring Gardner some purple urchins.

What's inside is the part we eat, the uni — a part of the sea urchin considered a delicacy in Japanese cuisine. (You might have encountered it on the menu at a sushi restaurant.) Commercial divers have been harvesting urchins in California for decades — primarily red sea urchin, because they're bigger. Gardner says we should be eating more of the purple ones.

"The problem with these guys is that when you open them up ... there's nothing in there," he says. Since the urchins have eaten up their food supply, they're basically skeletons.

Enter aquaculture, or the farming of aquatic organisms.

Can We Feed The World With Farmed Fish?

Gardner is also an aquaculture specialist with the California Sea Grant, a state and federal partnership that uses science to help coastal communities solve issues. So he had his students run a research trial on this problem. The goal was to make these urchins valuable by turning them into a delicacy.

Graduate student Katie Neylan helped run the experiment. She and her classmates removed 500 purple sea urchins from the ocean and transplanted them into big, blue tanks at the Moss Landing Marine Laboratories Center of Aquaculture.

"We came out and fed them every three to five days. We had red algae that we fed them, called ogo or Gracilaria pacifica. We fed them kelp, which is just giant kelp, Macrocystis pyrifera," Neylan says.

The ones eating ogo reached market size faster, in just eight weeks. Neylan says it showed how ogo is more nutritious than kelp.

The proof is in the eating

Then, it was time for the taste test.

On a typical foggy day in Carmel-by-the-Sea, the class crowds into the kitchen of Michelin-starred restaurant Aubergine. Here, Executive Chef Justin Cogley serves uni from around the world.

He uses tweezers to open up the purple urchins, revealing the orange uni inside. His favorite is the ogo-fed. 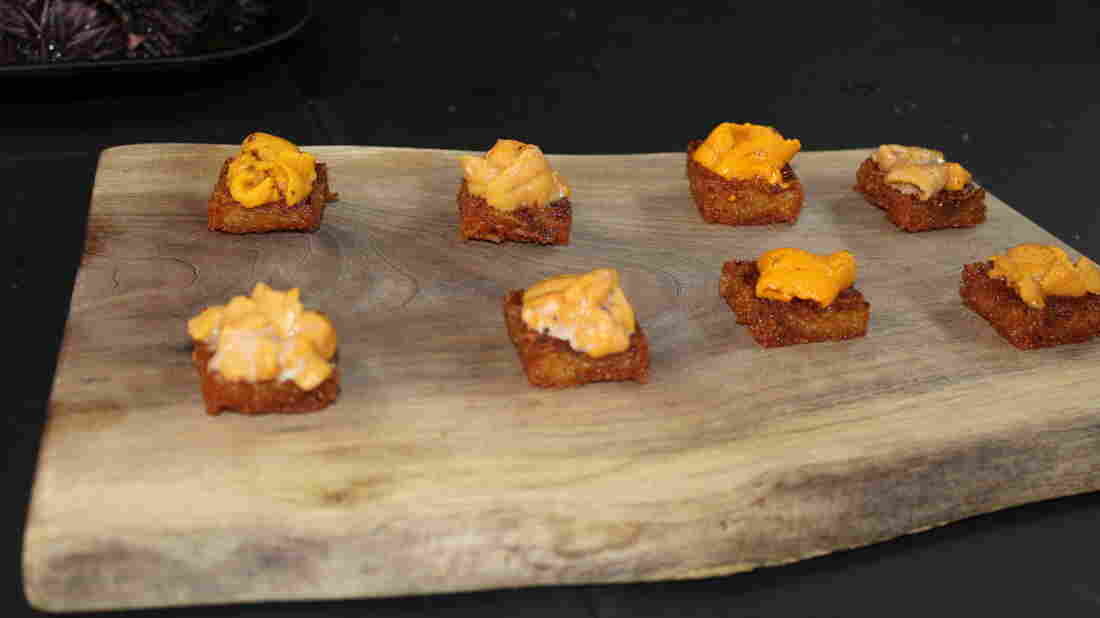 Aubergine Executive Chef Justin Cogley prepared the uni on a fried potato with a sweet soy glaze for the class to try. Erika Mahoney/KAZU hide caption 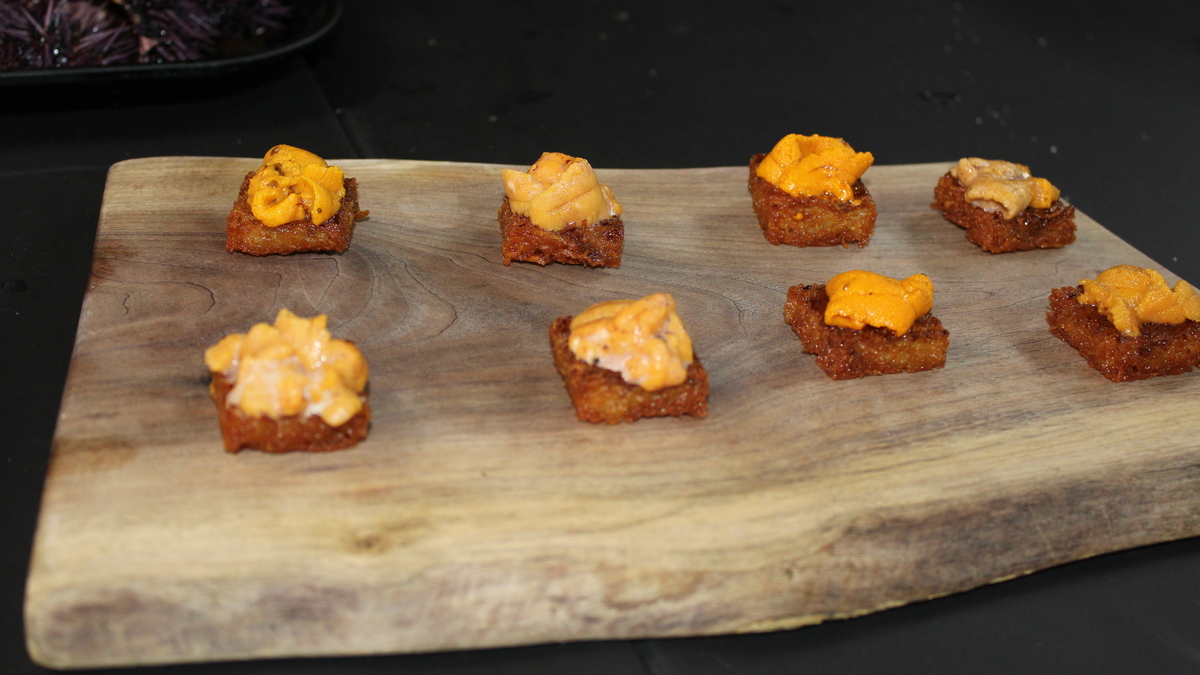 Aubergine Executive Chef Justin Cogley prepared the uni on a fried potato with a sweet soy glaze for the class to try.

"Honestly, it's rich and buttery. I think this one might be a touch [cleaner], tastes a little bit cleaner," Cogley says.

His conclusion? He'd serve it.

"It's a great story and everyone's trying to do their part to save the ocean, too," Cogley says.

He prepares the uni on a fried potato with a sweet soy glaze for everyone to try.

It's a tasty end to the project. But this could be just the beginning. A company called Urchinomics has been selling its ranched urchins in Japan. Now, it is working to secure a site in California. It's all in an effort to save the state's dwindling kelp forest and help the thousands of animals that depend on it.